Most riders who have a well-honed sense of self-preservation are situationally aware, whether it be road conditions which present potential risk or the actions of other road users.   Something as simple as noticing whether a car driver fails to hold a safe line on a twisty road with poor sight lines, or is fiddling about with something inside the car are all subtle hints to stay well clear.  Unfortunately, we all know that there are plenty of both motorcycle riders and car drivers with poor standards which put other road users at risk.

Being trained in Police Motorcycle Roadcraft has unquestionably raised the standard of situational awareness and consequential actions to mitigate risk from my past mediocre levels but it can be a double-edged sword too!  The training, particularly as an IAM Observer (instructor) means that I never switch off as it's so ingrained.  No apologies for that as it's what keeps us safe.  However, at a personal level, there can be a potential downside.  On social rides, I've had competent non-IAM riders say they prefer me to be up front because they think I'll be formally judging them if I'm down the back.  That's not actually true but it's perceptions that count which is why you don't find IAM members advertising the fact in social settings unless it comes up directly.

Moving on to the main point of this post, it's rather a rhetorical question but at what stage do you take action of some form when you see poor driving which may endanger others?  Where's the line between just shaking your head when you see some dumb driving or riding and doing something about it?  It's something I struggle with, partially because of the ego-free mantra of IAM NZ membership and the connotations of not wanting to be seen as self-righteous.  A couple of years ago, we followed a tourist camper van that was periodically weaving all over the road.  As cops in our area are thin on the ground, we rang the van hire company.  It turned out that the occupants had arrived from the UK just a few hours previously and were clearly jet-lagged.  Fortunately, the hire company had a mobile phone contact for them and got in touch pretty much straight away to sort it out.

Something like the scenario above doesn't take much thinking about but fellow blogger Bandit Rider (Andrew) has just mentioned an encounter with an aggressive SUV driver on a recent ride HERE .  That happened to me two weeks ago so thought I'd share it.

I was driving the car up our twisty coast road and caught up with an Audi 4x4 that was waiting to pass another vehicle.  It was clear that the driver was impatient as it was tailgating the vehicle in front.  The other vehicle pulled over soon after and I followed the Audi which proceeded to cut every corner, including ones which were blind.  I was upset as much as annoyed because he appeared to have his family with him.  Friday afternoon and had probably knocked off work early and was in a hurry, heading for one of many holiday homes on our peninsula.

The tipping point for me came after he exited an obscured corner still partially on the wrong side of the road with something coming the other way.  It wasn't a particularly close shave as the other vehicle had time to brake and move closer to the edge of the road but that was sheer good fortune.  However, what got up my nose was that the Audi driver clearly learned nothing from the event and continued to drive in the same manner.  That was when my conscience kicked in and I took a few of photos of his driving.  One of them is shown below.  For info, we drive on the left in NZ! 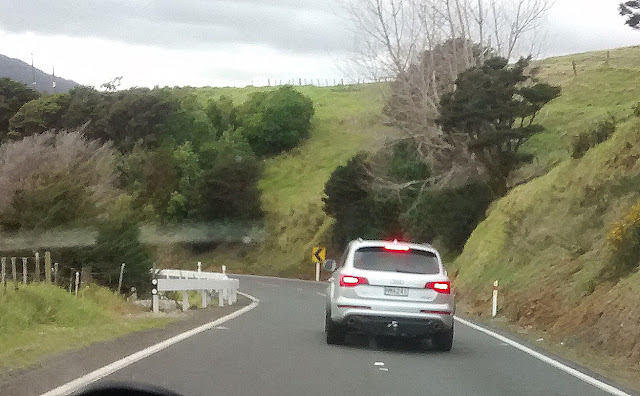 The corner is a tight, heavily-obscured left-hander.  The driver moves to the right hand lane to "straighten out" the corner and note that his brake lights are on.  He repeated this on every LH corner and cut across the centre line on right-handers.  What if a bike or car that was travelling at a reasonable pace was coming in the opposite direction at just the wrong time?

Although there is a *555 phone number to report bad driving, I chose to send the details directly to a senior highway patrol officer I knew professionally for comment.  To cut a long story short, he contacted the driver and had what might be described as a constructive but robust discussion, followed up with a warning letter and a copy of the photo above.  In this instance, I'd like to think that a constructive approach where the driver feels perhaps less resentful than when simply receiving a fine and demerit points may have been quite effective but we can never be certain.

This brings us back to the start point......  how do we decide whether actually do something ourselves about a situation we witness or do we just remark on it and do nothing?  I haven't got an easy answer for that and would love to hear from other people who have wrestled with similar situations.