A good day on the road gets even better.....

Summer's here, a beautiful warm morning today, the important chores all done.  What could be better than jumping on the bike and riding round part of the motorcycle nirvana where we live - the Coromandel Loop?  Well, the ride itself was just wonderful with very little traffic about but it was all the other unexpected things which served to make it particularly memorable!

Kit up and head into the village to fuel up.  My local garage and gas station, Furey's Creek Motors; is so-called because it's on the edge of a short, deep tidal creek to Coromandel Harbour.  Opposite  the gas station, there's a hard-standing area for boats of all kinds to be maintained.  The garage keeps an old tractor there and for a few bucks, will haul boats out onto the hard.  At present with with the so-called Supermoon, there are king tides.  They were so big this morning that the tide had overflowed onto the hard standing area and had caught their tractor on a little rise.  Great for an opportunistic shot! 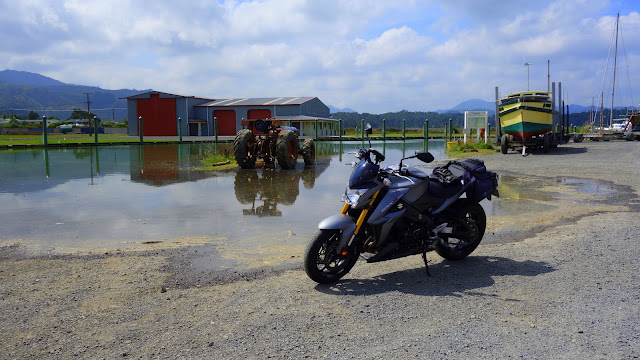 Whilst on the road to the town of Whitianga, about 45 km from home, I was thinking about Christmas.  Jennie and I thought we might treat ourselves to to a new fishing boat for a Christmas present.  (What about a Thruxton Bonneville, I hear you ask?)  Answer: I don't want to be sucking hospital food through a straw, thanks!

Anyway, with a boat in mind for fishing and towing the grandkids about, I stopped off at a marine shop to enquire about a Stabicraft Fisher.  The dealer said that there's up to a 3 month waiting list whilst they build to customer specification but they were actually receiving a high spec model in January and if we were interested, he'd be happy to take us for an obligation-free spin in it.  Sounds good to me, the Chief Financial Officer is beaming, so watch this space - old boat shortly for sale! 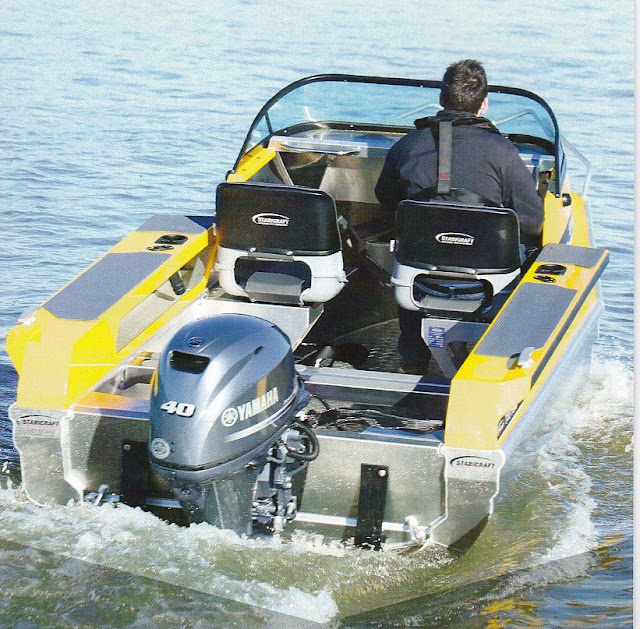 As I was about to chuck on my helmet outside the marine shop, I heard a piston-engined plane approaching quite low and looking up, saw the Titan T-51 kitset 3/4 scale Mustang which lives at Whitianga airfield less than 1 km away coming in to land.  Quickly jumped on the bike and hared round to the airfield but by the time I got there, it had taxied and parked outside its hangar.  Still nice to see it though. 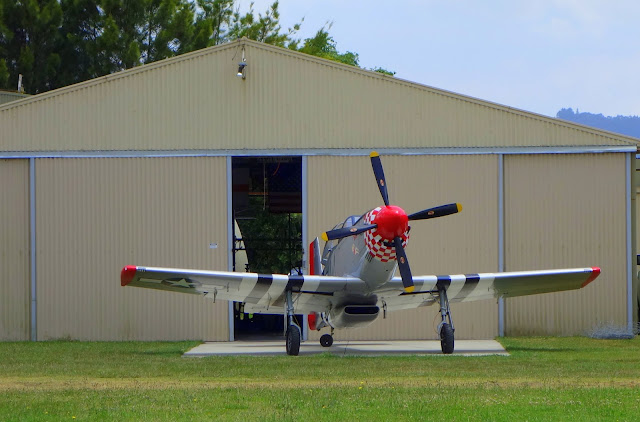 As I was putting the camera away, I heard yet another big piston engine approaching and was amazed to see a P40 Kittyhawk on final approach!  Excuse the focus but there were only a few seconds to wrench the camera out of the bag, point and hope for the best!  The Kittyhawk is part of the Warbirds collection based at Ardmore near Auckland. 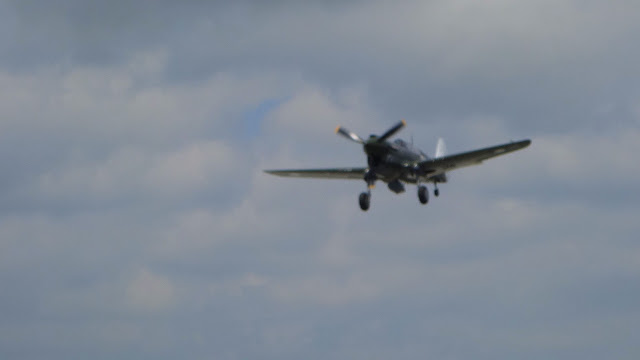 After it had landed, it taxied right back to where I was standing before taking off again, so the following photo is a lot better quality.  So many surprises at a grass airfield mainly full of Cessnas and the like! 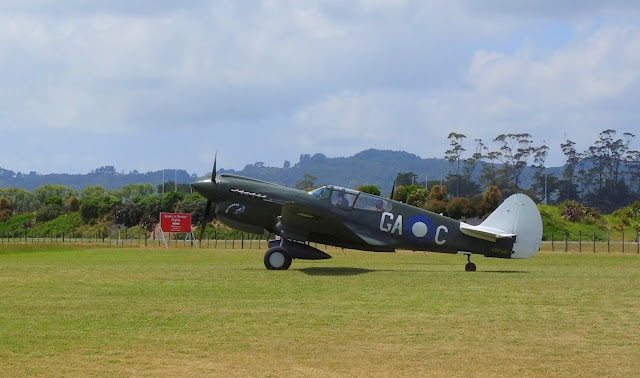 The surprises hadn't finished though.  As I was about to leave, up rocked a Bond Bug!  This is the first one I'd seen on the road in NZ, other than a stationary exhibit in the Southward Museum, down Wellington way.  Many readers of this blog will probably have never heard of them but for those of us of a "certain age", they are the epitome of the Swinging Seventies in the UK!   Manufactured between 1970 and 1974, the 3-wheeler had a fibreglass body and a 700 cc 4 cylinder alloy engine (later uprated to 750cc).  Rare as hen's teeth but in the modern era of micro-cars, it doesn't actually look out of place.   I guess beauty is in the eye of the beholder but I reckon it looks pretty cool!  Here are a few shots, 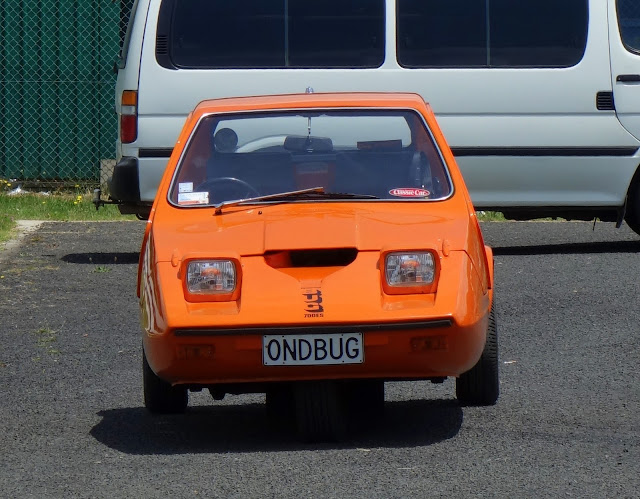 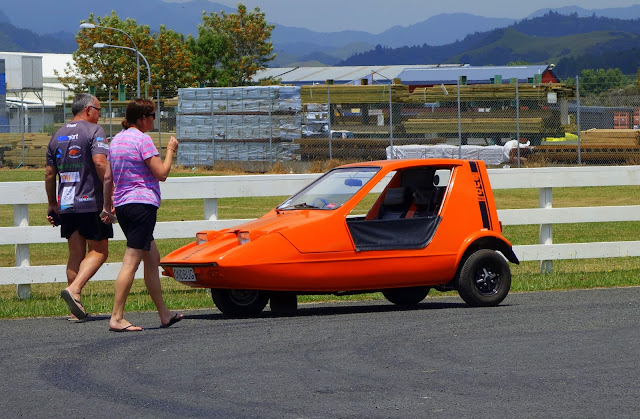 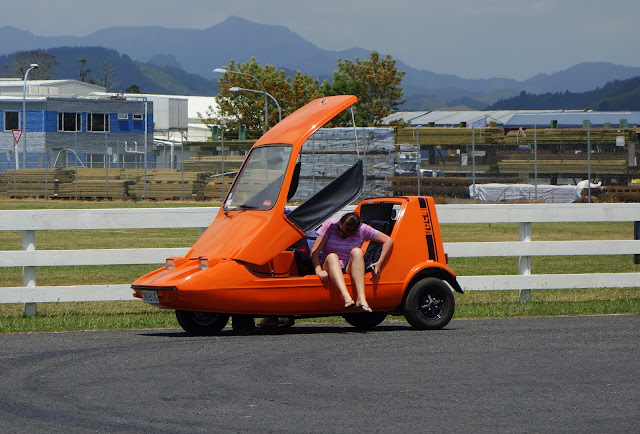 Forget modesty if you had a mini-skirt in the 70's!

After all the excitement, it was round to Subway to pick up some lunch and to eat by the Whitianga waterfront with all the Pohutukawa trees coming into bloom.  Wonderful spot for a feed, 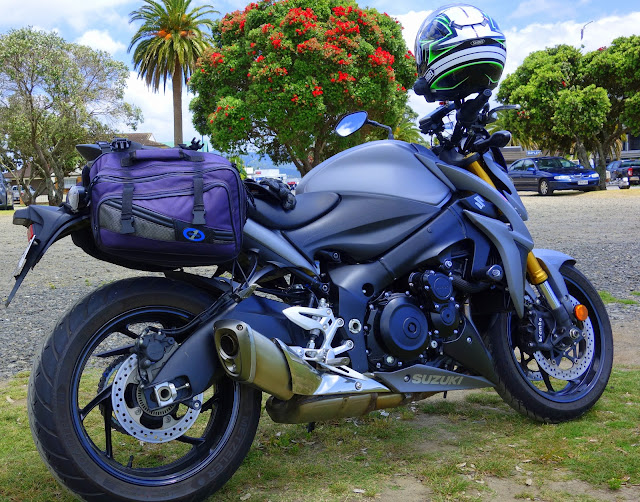 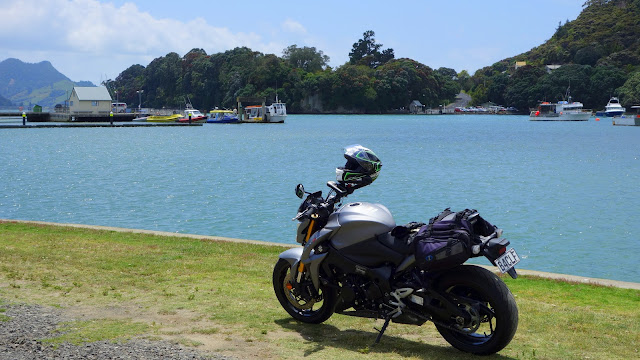 All this variety from what started out as a rambling ride with no particular destination or purpose in mind.  Some days are extra special and today certainly fell into that category!