A most excellent week!

Definitely one of the busier weeks for this old geezer!

Last weekend was the Institute of Advanced Motorists annual conference and AGM being held at Lake Taupo in the central north island of NZ, about 270 km from where I live.  For members who fancied a bit of speed without red and blues and sirens behind them, there was also a trackday on offer on the Friday at the nearby Bruce McLaren Motorsport Park - the full international circuit no less!  I was certainly up for that! 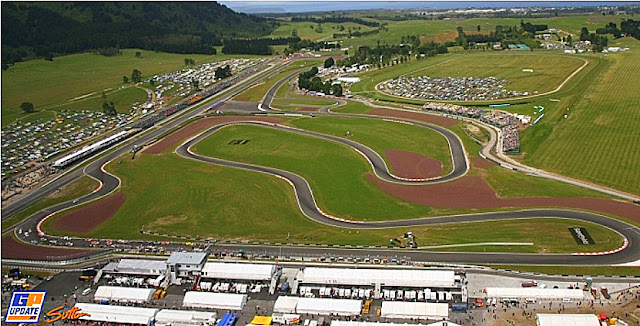 Riding down the previous afternoon, it was wet with lots of roadworks but the morning of the trackday dawned sunny and warm - wonderful!  After scrutineering, we set up in a pit garage, dropped tyre pressures from road settings, taped the mirrors and waited for the briefing and first session. 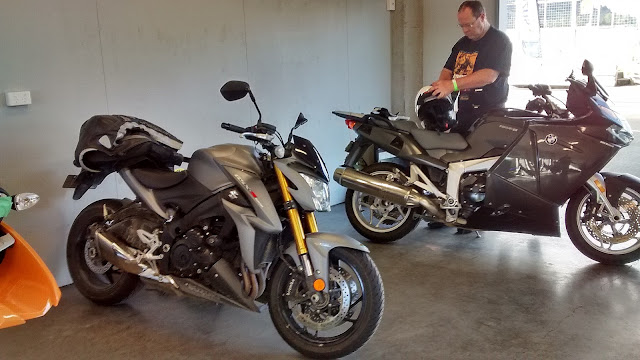 The Suzuki ready to rock, with Alan's BMW 1200GT in the background 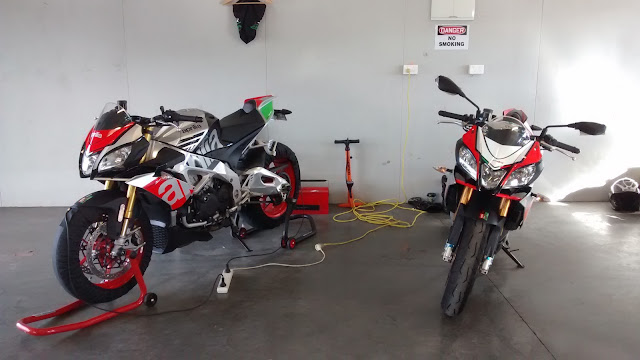 The first session was taken relatively easy whilst riders learned the track, sorted out braking markers and so on.  All accomplished with no dramas.  From then on, it was all go, with progressively larger throttle openings held open for longer!  My road-going fuel consumption is generally between 5 - 5.3lt per 100 km and on the track it was between 8-9 lt per 100 km!

Alan on the 1200 GT and I were pretty evenly matched.  He'd been to the California Superbike School and was really impressive in the tight infield whereas I was faster on the sweepers and straights.  At 230 km/hr down the back straight, neither of us wanted to give an inch and all I'll say is thank goodness for ABS whilst scrubbing off enough speed to make the next turn! 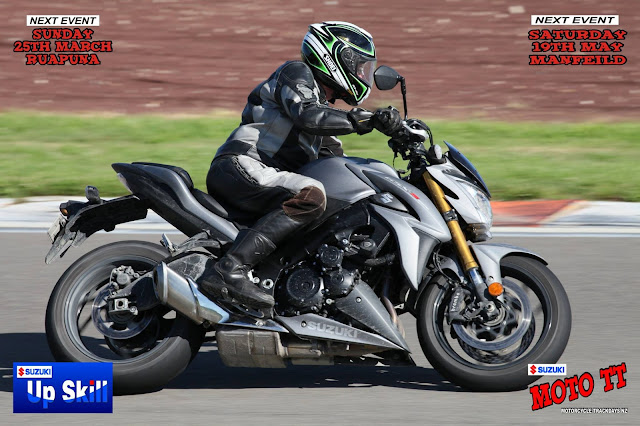 70 year old hooligan having the time of his life! (official photo) 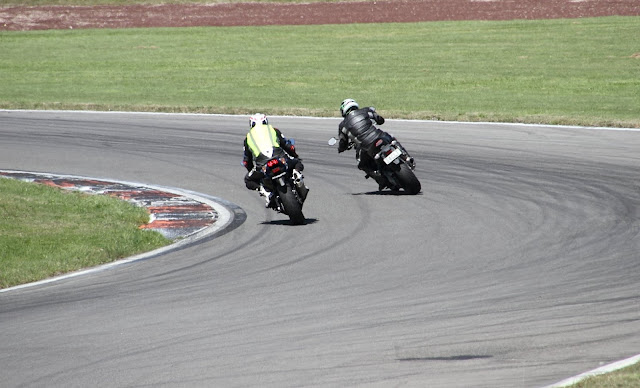 Sticking it to a Gixxer rider who is on the wrong line!  (photo: Barry Holland) 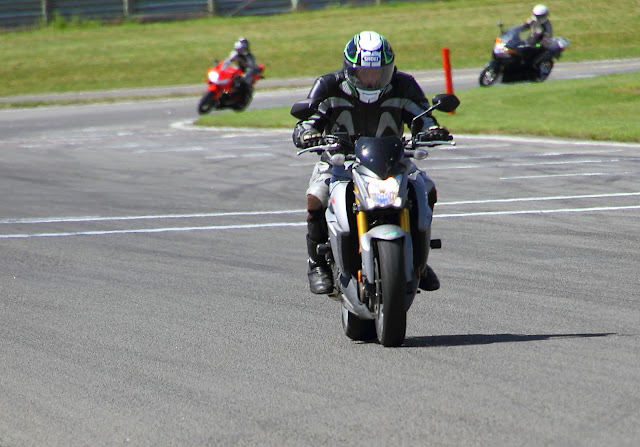 Over 160km/hr down the short pit straight (photo: Barry Holland) 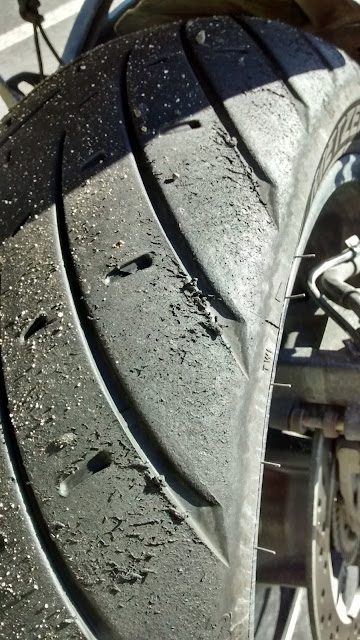 The following morning, there was a presentation on electric vehicles which completely changed my ill-informed views!  IAM member Wendy brought along her recently purchased Tesla Model S which has a 0-100km/hr time of about 4 seconds and was beautifully appointed. 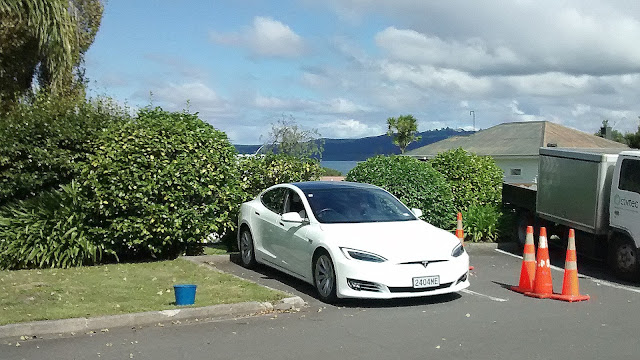 Wendy's Tesla - get the number plate?

A local dealer brought along a Nissan Leaf and Renault Zoe.  Both were surprisingly quick off the line and handled brilliantly.  The lack of noise made them even more impressive.  Running and maintenance costs were incredibly low and with ever-decreasing battery costs and increasing range, they're now a serious consideration, particularly as a commuting or round town vehicle.  A mate of mine has one for commuting and saves $100 per week on gas! 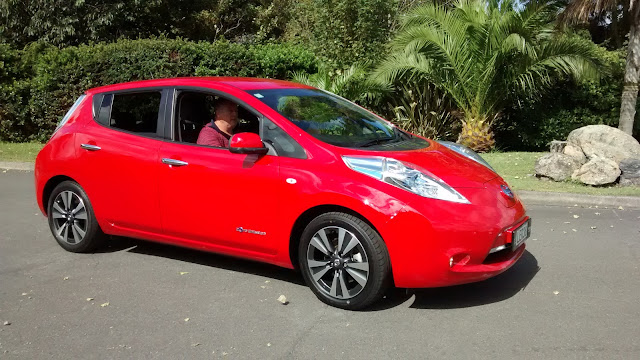 Lloyd hammering a Nissan Leaf off the start line

As enjoyable as the cars were, the real fun were the pedal-assisted e-bikes which were there for us to try out!  The Giant model I tried was a real buzz and as fast as heck in "turbo" mode.  One of our members has one for commuting to work in Auckland, a round trip of 38 km and absolutely loves it.  Methinks that one would be handy to replace my 2 decades old mountain bike with all the hills where we live! 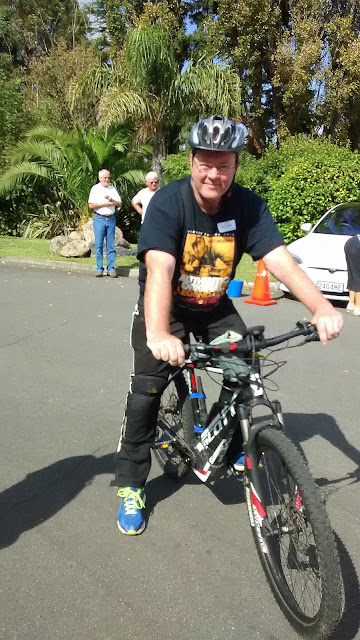 Alan on the Scott e-bike

We also had a presentation by an engineer from Helite, the people who manufacture airbag clothing for motorcyclists.  Everything from inflating hi-vis vests through to adventure riding jackets.  Externally, they looked like a normal jacket and it was an impressive presentation.  Prices were similar to normal higher end motorcycle jackets.

In the afternoon,  it was off to Rotorua, some 90km away to play on the luge.  This is a concrete track  winding down the side of Mt Ngongotaha, hurtling downhill on an unsprung plastic cart.  The more competitive of us kept our leathers on in case of wipeouts, haha! 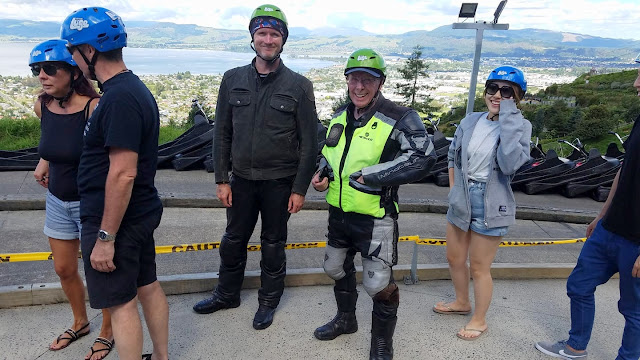 Lee and I queuing in full leathers - no quarter given or expected! 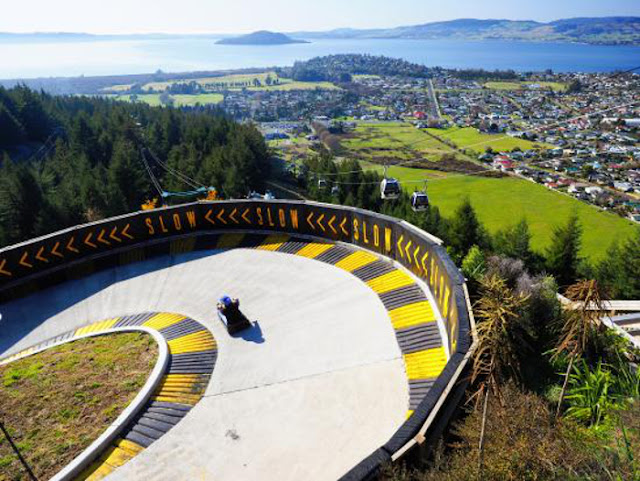 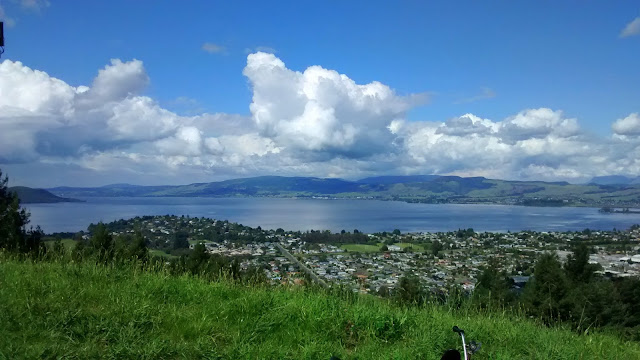 Stunning views over Lake Rotorua from the top of the luge 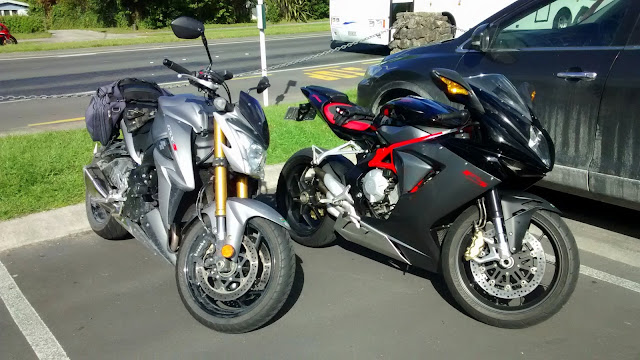 After the excitement of the afternoon, it was a brisk ride back to Taupo for a delightful buffet dinner.  The following morning, there was a superb session on accident scene protocols and rendering immediate assistance by an ex-military paramedic and fellow biker.  He was down to earth and debunked a few myths - a great learning experience.  I'll also be doing a re-think on the medical kit I carry and will certainly be adding Celox gel packs to safely stop bleeding. 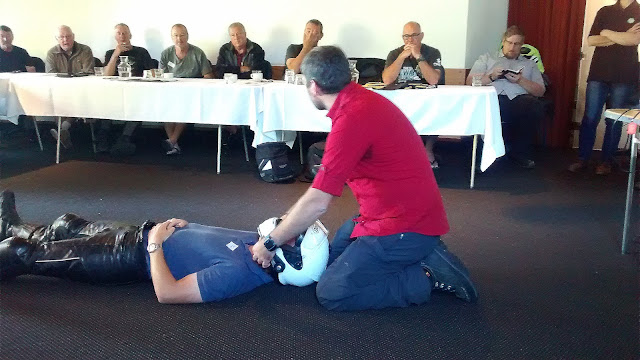 After a mercifully short AGM (IAM does not thrive on bureaucracy!), it was time to head home.  It was in the delightful company of Street Triple owner Joanne, who is the IAM co-ordinator from Christchurch in NZ's South Island.  Jo hadn't previously visited the Coromandel Peninsula so it was a good opportunity to show her the sights by bike and car.  Jo is dual-qualified as an IAM Observer for both bikes and cars and I'm not!  Found it vaguely unsettling driving her around by car, despite her protestations that she was off duty! 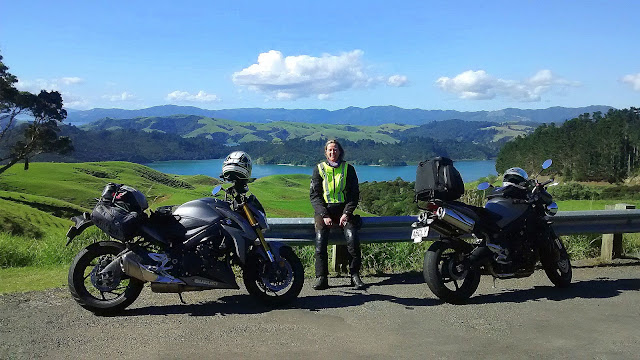 Dr. Jo and her Street Triple R on the western side of the Coromandel Peninsula 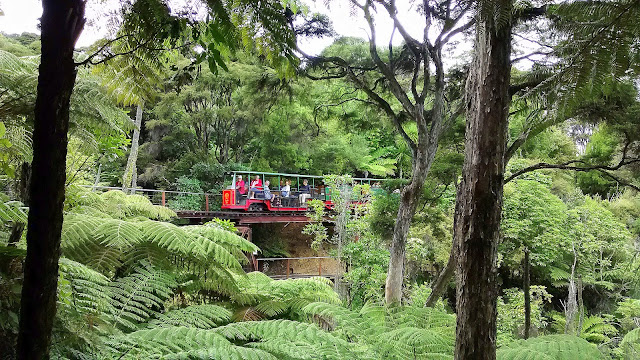 On the fantastic Driving Creek pottery railway in Coromandel

The day after Jo began her long trek back to Christchurch, and in the company of some other IAM members from our region, I attended a suspension clinic in the Auckland area with Dave Moss, one of the world's authorities on how to set up motorcycle suspension. (His website HERE and his YouTube masterclass HERE , among many others). I thought I was "reasonably" ok on the basics of suspension adjustment but just how wrong can you be???  The clinic was a trial initiative between an Auckland-based riding instructor Chris Smith of Passmasters , Dave Moss and amazingly, our regional council authority.  The rationale was that properly adjusted suspension has the potential to save lives from a bike which handles better with improved grip, less fatigue plus all sorts of peripheral benefits.  The Waikato Regional Council has long championed motorcycle safety with a range of motorcycle training courses but this was the first foray into suspension as a safety initiative.

Arriving in Auckland, Dave checked all the initial settings of the bikes and made some preliminary adjustments based on rider weight.  He then explained what he was doing and why in easy to understand terms and made sure that everyone was comfortable to ask questions, no matter how dumb they thought they were - Dave is a patient and natural communicator.

He then explained that we would be going for a ride of some 150 km covering all sorts of conditions with several stops to make adjustments whist the bikes were at normal operating temperature - the only way to do it properly. 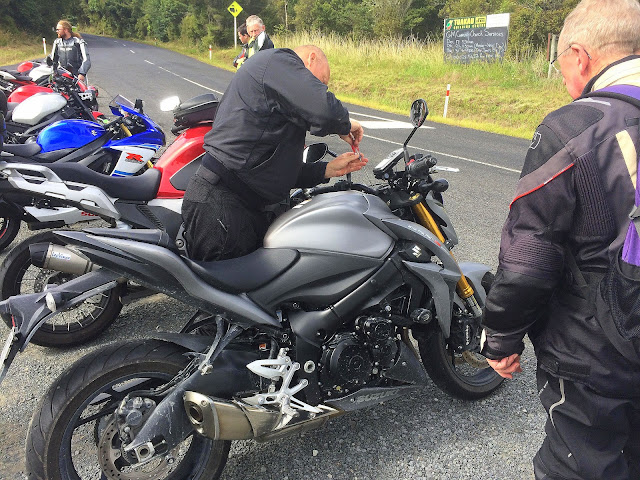 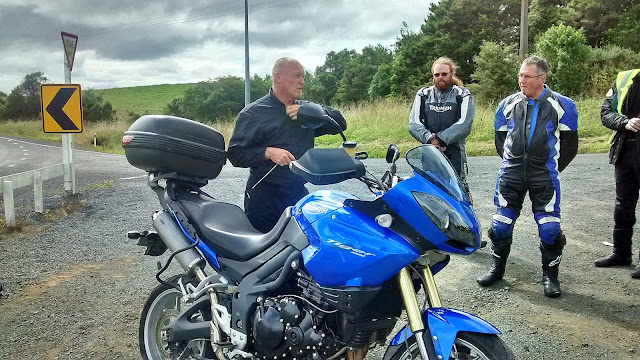 Dave holding a Q&A on the ride 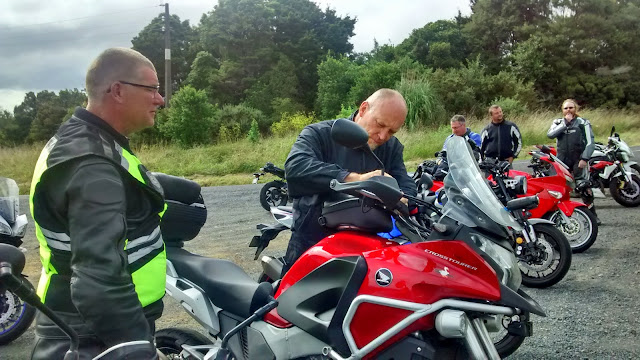 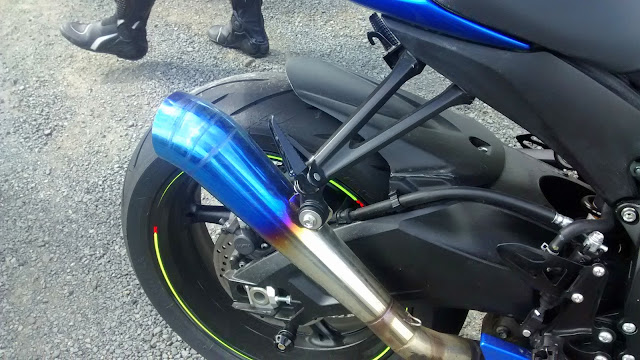 To cut a long story short, the improvement to my GSX-S was massive, which was a bit of a shock (no pun intended!) and all the attendees felt the same way.  No longer did it wander about over surface irregularities and the effort required to countersteer through a tight series of bends had diminished by a large amount - far less fatiguing.  In fact, I initially tended to over-correct with far more effort than now required, thanks to muscle memory kicking in! All this from fairly tired suspension.  On the way home, the last 50 km was in heavy rain and an indifferent road surface from the recent storm.  I've never previously felt so much confidence in riding in less than optimum conditions whilst still able to make good progress.  Massive thanks to Dave Moss, Chris Smith and the Waikato Regional Council for the enlightened attitude of making this genuine safety-related opportunity available to a wide range of riders!

What a day, what a week!