Earlier this month, I made a post about scanning old photos we had stored everywhere round the house in boxes.  Some of them were beyond salvage (a flooded basement garage a couple of years back didn't exactly help) but most of the important ones were ok so a start was made on digitising them.  A bigger issue was the mountain of 35mm negatives without corresponding prints, plus 35mm colour slides.  I suspect that most householders of errr....  a "certain age" will be in a similar position!

It's bothered Jennie and I for some time as these form a treasure trove of memories, both remembered and forgotten.  They would also be a legacy to pass on to our children.  Some of them go back to the late 60's but many are also a record of our children growing up.  Even though the subject matter would be relatively mundane in most cases, that's what family history is all about and still gives a sense of identity and place.  The lockdown presented an ideal opportunity to do something about it after years of procrastination.  We had decent experience scanning old prints with our Canon printer scanner.  However, we were starting from absolute ground zero as far as negatives and slides went.

We knew that there were some cheap, crappy scanners on the market as well as eye-wateringly expensive professional ones.  What was the right balance between price and quality for what you might call family use? We wanted something which we could mainly view as computer images with perhaps a print of the odd one which had special meaning.  That triggered a whole lot of research, followed by crossed fingers that our intended purchase didn't involve us buying a lemon.  Fortunately, our choice was absolutely "fit for purpose" so I thought we'd share our learnings and a few examples in case it's of background use to anyone in a similar position. 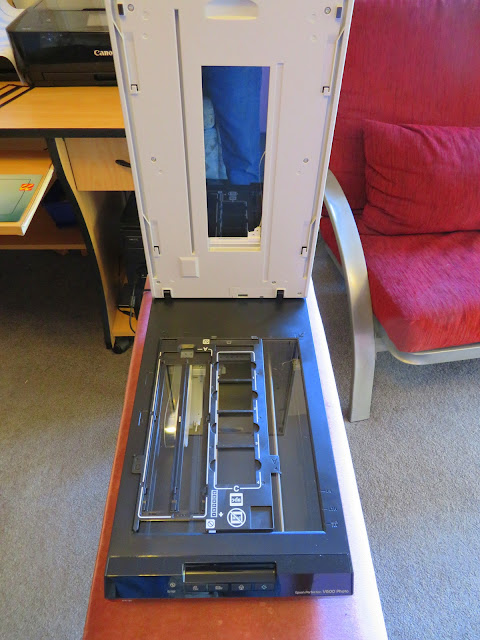 With respect to the driver software, it caters for both home and "professional" use. What this means is you can do scans in a full automatic mode for sheer convenience or you can play about with colour balances and other factors in a full advanced mode.  I've done both and must say that for most of what we require, full auto is absolutely fine.  You can also select a whole load of different resolutions and choice is very much dependent on how you want to view them.  If you want to actually print a scan to a large size, then you'll want a higher resolution.  I have used 800 dpi for most of our scans of both slides and negatives. It's a pragmatic compromise partially based on end use and also scanning time.  We have at best guess 2 or 3 thousand negatives and slides to work through.  At 300 dpi, each slide/negative takes about 45 seconds to scan.  At 800 dpi, it's 1 minute 45 seconds.  Haven't bothered to time a 1200 dpi scan but you get the picture!

Our personal experience is that scanning negatives often produces a higher quality image than with slides.  This is a reflection of how our originals have been stored.  There's no such thing as a climate-controlled environment where our scattered collection of originals are stored.  Some of the slides have scratches or dirt on them.  The latter can often be cleaned with a soft brush, cotton bud or slightly damp cloth.  Aftermarket software also helps to clean up blemishes but I'll come back to that.  Although our negatives and slides are stored in similar locations, the negatives have remained untouched in their tight-fitting plastic wallets so have stayed in pristine condition.  That's why scan quality tends to be a wee bit better than our slides.  The aftermarket software we've used is Picasa (are we the only people in the world who still have this on their PC's?) and the free Gimp.  Both are excellent for removing small blemishes, particularly in light areas such as the sky.

On this blog, it won't be possible to replicate the real life quality we're getting but the V600 has exceeded our expectations in terms of quality for a home user.  We could still use a professional service for something really special but so far, we haven't found a need with the results we're getting.  Quality is also dependent on the quality of the camera used and the person behind the lens!  However, here are some examples from the first few days of scanning.  All of them were scanned at 800 dpi but that won't show on the blog.

This was taken in 1975 just after arriving in NZ (oh, the clothes and hair!) with our Ford Escort Mk1.  It's a slide and some dirt and scratches can be seen in the sky - yet to be attacked with clean-up software. 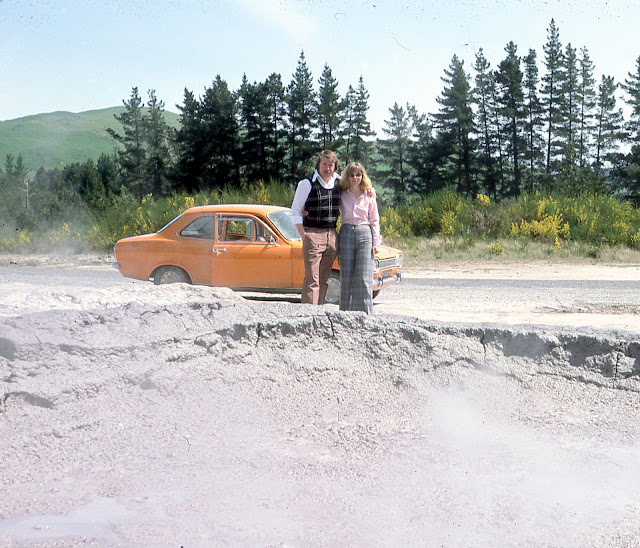 My Honda GB400 TT around 1990.  This was from a negative and needs no retouching.  Easy to play with brightness and colour if I want to at some stage. 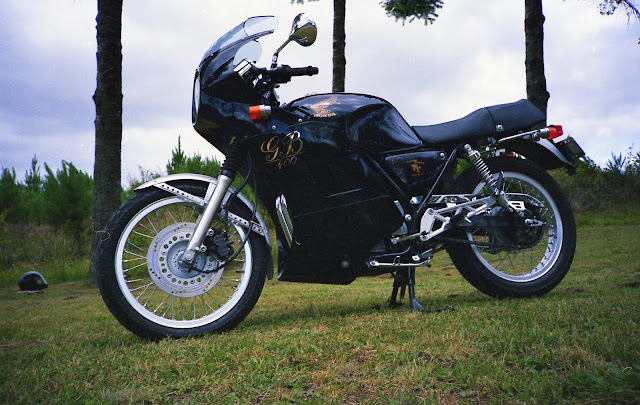 I wish I still owned it as a second bike!

This is our younger son on graduation day pulling a pint in a student pub.  Originally taken (I think) in 2001 and is a negative. 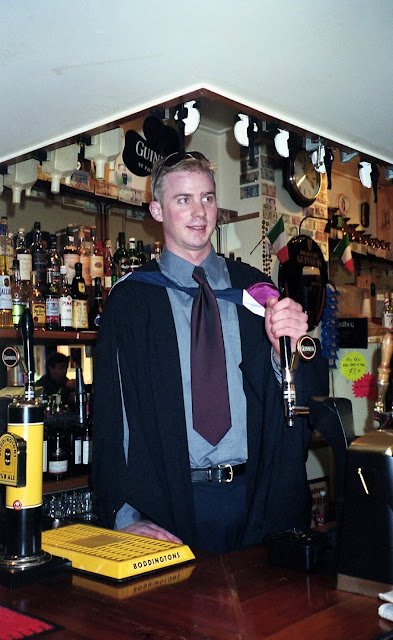 Me in the mid-80's having just been hurled out through the rigging when my catamaran nose-dived  on a broad reach!  Trust Jennie to have a camera handy.  This was a slide. 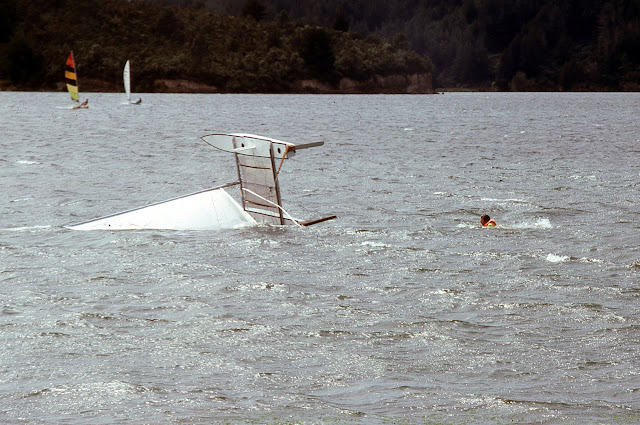 
In 1985, we took the children back to the UK for a holiday to meet their grandparents and our friends.  Whilst there, I took our boys to the Duxford aircraft museum.  This is a negative of TSR 2 supersonic low level nuclear bomber.  There's a strong family connection with it.  My Dad was an engineer/physicist involved with wind tunnel testing the models before the actual aircraft was built.  Before being moved to Duxford, it was housed at the aeronautical faculty at Cranfield University whilst I was there.  Quite often strolled across the campus to see it and other exotic aircraft in one of the hangars. 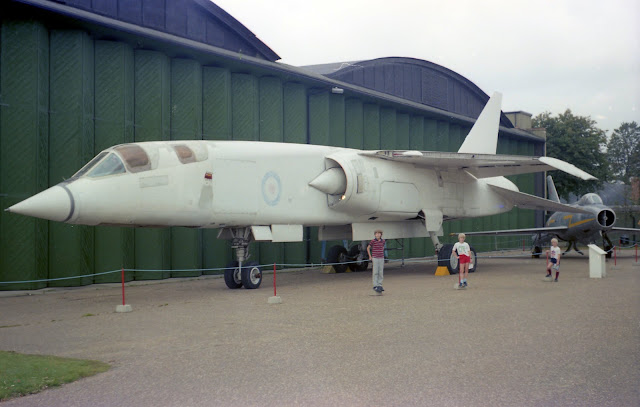 Our kids in the mid-80's.  We'd been given the use of a lakeside holiday home and boat by our next door neighbour who happened to be a government minister at that time.  Living next door had both its perks and downsides!  This is a slide and you can see a white blemish that I need to fix near the cloud. 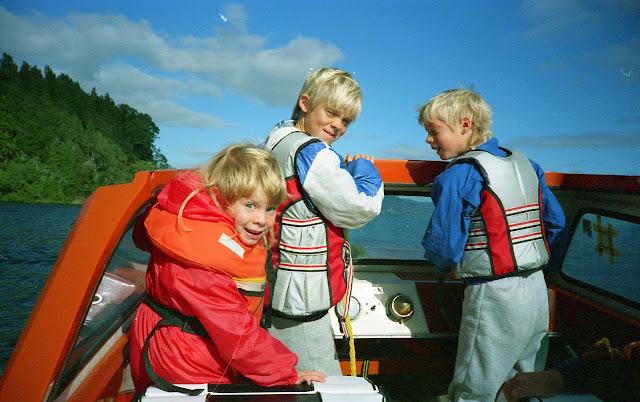 This is a slide which was scanned at 1200 dpi then cropped to bring the subject matter closer.  It was taken (I think) in 1971 and features UK rider Ray Pickrell on a factory-prepared BSA Rocket 3 production racer. 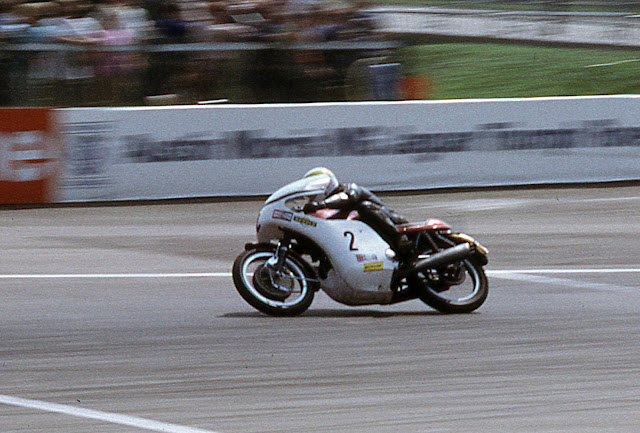 A wonderful howl from these bikes

This scan was taken in the early 80's from a negative in the far north of NZ. Victoria wasn't even a gleam in her parent's eyes!  Short shorts on guys were clearly still socially acceptable then. 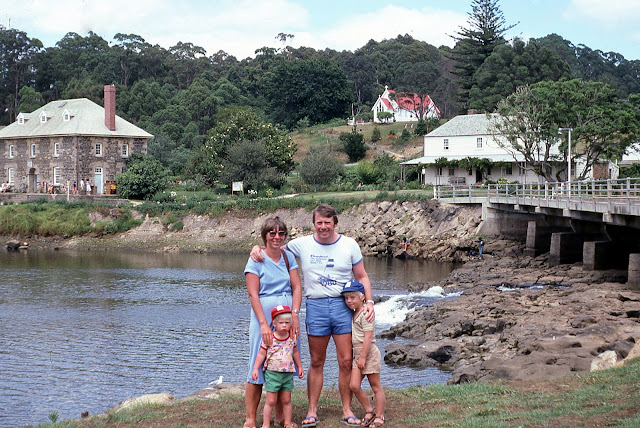 So many more scans to do and I'm learning more all the time but of the ones done so far, the next slide is my personal favourite.  It was taken in 1972 whilst on honeymoon in the then Yugoslavia at a Lipizzaner horse stud.  Jennie was blissfully unaware that I was taking the photo whilst she was making a fuss of one of the stallions.  Makes it absolutely natural and 48 years later, still makes me wonder what she saw in me :-) 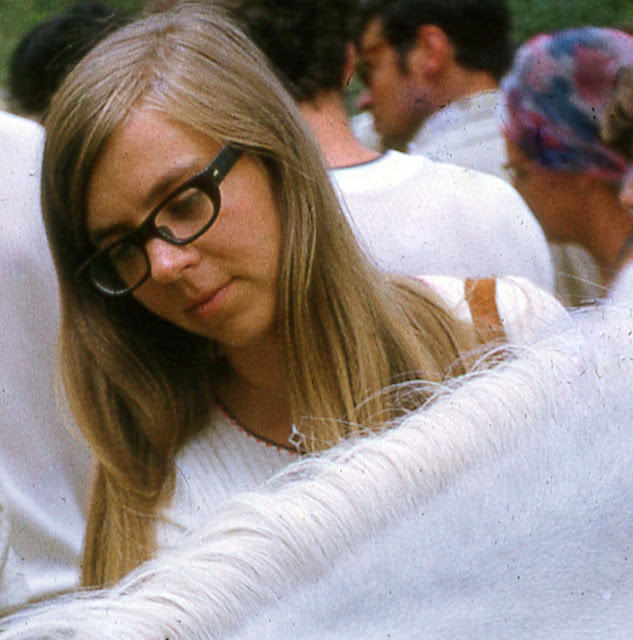 I hope that our positive experiences so far might strike a chord with others who have hordes of slides and negatives.  There's only been one slight downside (apart from the time it takes).  The Epson software is a tad flaky and in certain circumstances, it will freeze.  A mate suggested a simple solution to this which works perfectly.  Right clicking on the Epson desktop icon brings up a menu.  Click on Troubleshoot Compatability, then Try Recommended Settings (Windows Vista Service Pack 2) and you're away!
Posted by Geoff James at 14:32