After 2 weeks of ownership....

Well, after 2 weeks of ownership, I must say that I'm loving ownership of the MGB GT and thought I'd document some of my thoughts and experiences so far.  Equally, Jennie loves it too which is important for the joint ownership.  She finds it more comfortable than her last MX5 too although in no hurry to actually drive it because of the heavy steering at low speeds and the brakes requiring a bit of effort compared with modern vehicles. 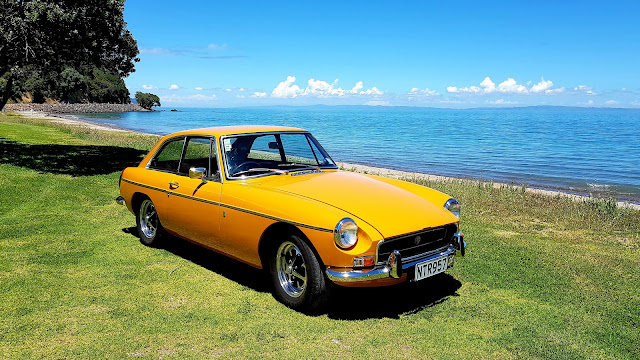 Although the 49 year old car has been restored to close to "as new" condition, ownership of a classic car does require quite a degree of commitment to maintain it in top condition.  A lot of my time so far has been spent building up a knowledge base through reading the service/repair manual, watching YouTube videos and joining the MG Experience website and NZ MG Owners Club.  There's a massive amount of experience to draw on.  Here's a good example.....

For the life of me, I can't remember what the oil pressure was when we first looked at the car but on the delivery run home, it showed 35 psi.  This wasn't disastrously low but a good engine should show 50 psi or more at open highway speeds.  As it still showed 35 psi at tickover, I suspected that the gauge might be faulty.  Closer inspection showed that a small piece of translucent plastic (an illumination diffuser) had partially dislodged and was stopping the needle from going full range.  I had visions of removing the entire dash to dismantle the gauge but posting a query on the MG Experience website revealed a fix which only took a couple of hours to do - outstanding!  The gauge then showed 55 psi. 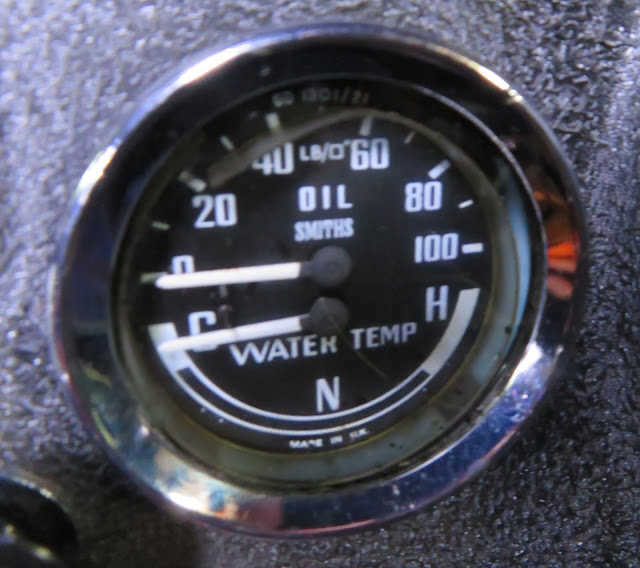 Plastic diffuser on periphery of gauge before fixing

I also wanted to do an oil change as the previous owner flagged that it was getting close to time.  More reading and watching YouTube!  Who'd have thought that changing the oil would have presented any issues?  In this case, the oil filter points vertically upwards at the side of the engine.  The worrying thing was that the moment I started to unscrew it - where was the filter oil going to go?  Trouble is, there was conflicting info about what sort of filter should be used.  Some had non-return valves to stop engines being restarted with an empty filter and other sources said it didn't matter as long as you turned the engine over a few times without starting it after the oil change to refill the filter.  I chose to buy one with a non-return valve (a Ryco Z38) and fill it before fitting.  Unfortunately, the old filter appeared not to have a non-return valve by the amount of black engine oil dumped on the concrete, sigh.....  Message to self:  make sure that the drain pan is directly under the filter next time!  Half an hour spent cleaning up the mess.  The rest of the oil change went smoothly and access to the underside of the car was easy with a scissor jack and proper stands. 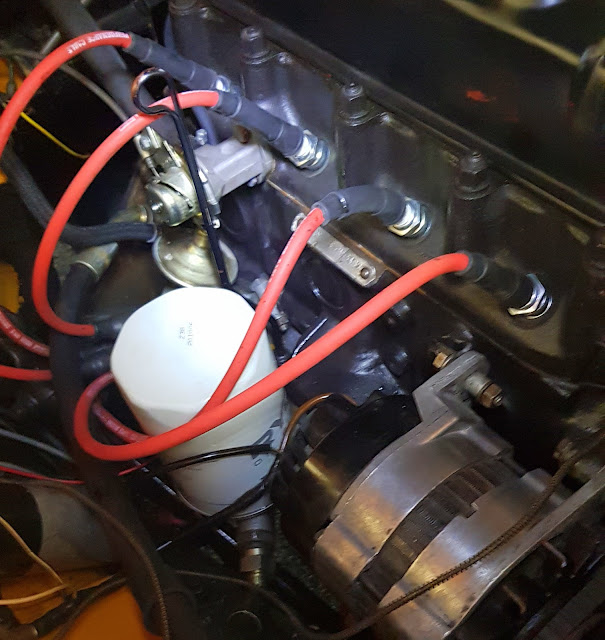 New (white) filter in place
An interesting observation for the nerdy amongst us!  The previous owner used Castrol GTX 20/50 which is an approved oil for the MGB.  I decided to go for the Penrite 20/60 Classic Light which has a high zinc content, suitable for older vehicles. On startup, the pressure gauge now reads a little over 60 psi, around 7 psi more than with the old Castrol GTX.  It may be that the viscosity of the old oil declined over time, the new oil has a wider viscosity range or some other reason but the anal engineer in me will watch and theorise over time!
I also installed a USB port for phone charging and that's been my only failure to date as the phone doesn't charge. I managed to find a switched power source behind the dashboard but not sure about a reliable earth so a bit more investigation is required when I have time.
Flicking through the maintenance manual, there are a zillion greasing points to be periodically attended to, most of which involve squeezing into difficult places underneath the car.  There are also many more maintenance items yet to be discovered which reinforces that with a classic vehicle, you don't just jump in and forget about maintenance apart from an annual service.  Then there's adding a lead substitute to the fuel tank every time you fill up although admittedly, this isn't a big hassle.  It's mainly supposed to prevent valve seat recession, so well worth it as it's easy to do and inexpensive.  The manual says to use 100 octane gas (at the time it was freely available) but 95 octane + additive is ok as long as you don't give it too much throttle in a high gear or load.  It will pink if you do that - just a case of getting used to driving a little differently.
Driving the car with no power steering and indifferent brakes requires a different approach but it's surprising how quickly I've dialled into driving it.  In many respects, it's like riding a motorcycle as it requires a more dedicated approach with a fair bit of concentration which is no bad thing.  In February, we're off to the 3 day British car festival "Brits at he the Beach".  This should be a lot of fun judging by the variety of cars at previous events: HERE .  (You can avoid 2 minutes of Morris dancing at the start!).
One final thing to add.  The previous blog post detailed a 3 month scrap with officialdom before we could take physical possession of the MG.  When the new ownership documentation arrived a week ago, the car was described as a Roadster (the convertible version of the MGB), not the GT version.  Words fail me!  Currently waiting for the NZ Transport Authority to correct the error although addressing it in a timely manner is not expected! 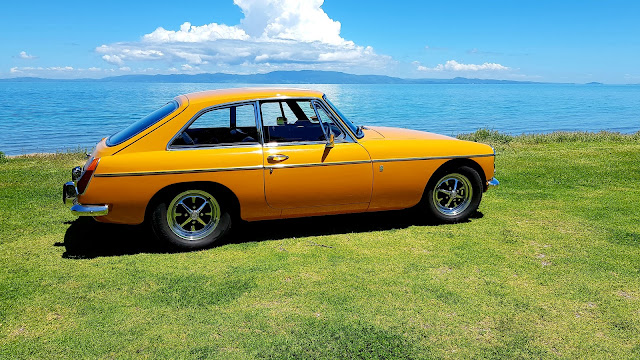 The Firth of Thames - uncharacteristically like a mill pond

Despite spending a bit of time coming to grips with a new toy, motorcycling hasn't been abandoned.  With lockdown still in force in much of the Waikato province and also Auckland, the Coromandel Peninsula is a joy to ride.  Last Sunday, a bunch of us did both the northern and southern parts of the loop in very light traffic and warm, sunny conditions.  Great company, no dickheads to spoil the ride and minimal traffic - what's not to like? 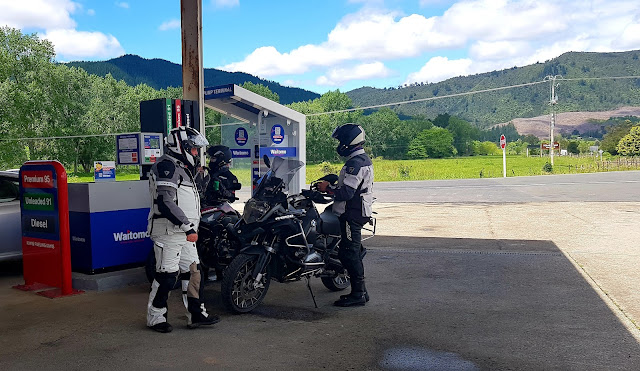 Some of the thirstier bikes filling up at Hikuai - especially a certain Yamaha MT-10 SP! 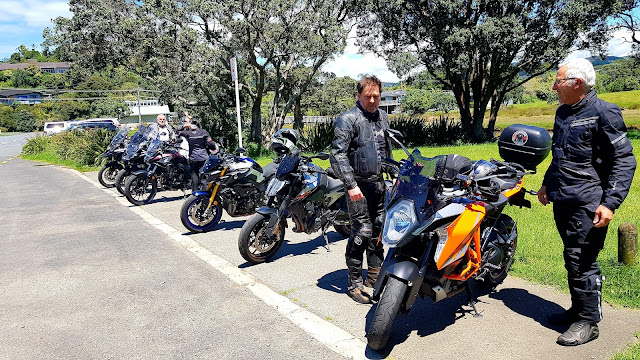 Arriving at Kuaotunu for lunch 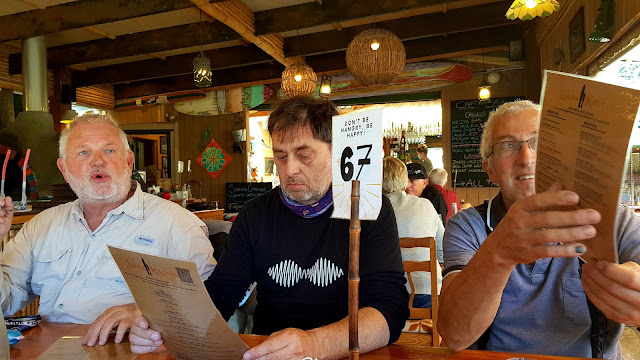