When life hands you lemons.....

Fate has a funny way of dealing the cards sometimes.   I've been really enjoying the new e-mountain bike.  Fresh air, getting fitter - what's not to like?  I haven't been on any demanding trails but felt quite comfortable on the ones I've tackled.  It's much closer to home where skill improvements are clearly required.

Coming home from a ride 3 weeks ago, I went to dismount right outside our garage and the elastic lace on one of my cycling shoes caught on one of the serrated pedals.  Time slowed down whilst I slowly toppled over and smacked into the garage door opening and felt a rib let go.  Pain and a lot of bad words!  It's not been as bad as expected, just a bit uncomfortable in bed, with sneezes and coughs to be avoided.  Under normal circumstances, I'd be chomping at the bit to get out again but for the last few weeks, the NZ winter has been horrendously wet so some enforced chilling hasn't been a big deal. 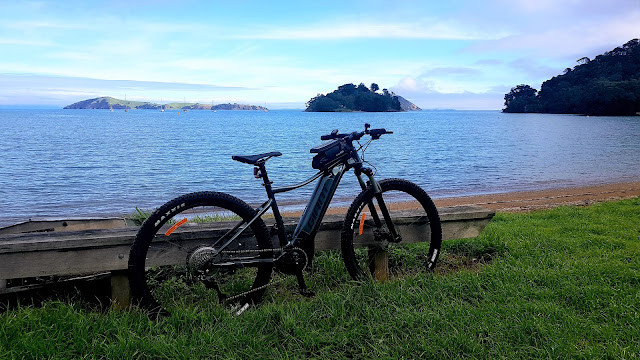 A ride along the coast on the fateful day

As mentioned in a recent blog, Jennie and I are celebrating our Golden Wedding anniversary (actually tomorrow) and as part of those celebrations we invited our friends to lunch at a local restaurant last weekend.  It was a wonderful occasion, full of laughter and irreverence.  Not that we needed reminding, but we're genuinely blessed to have such great friends. 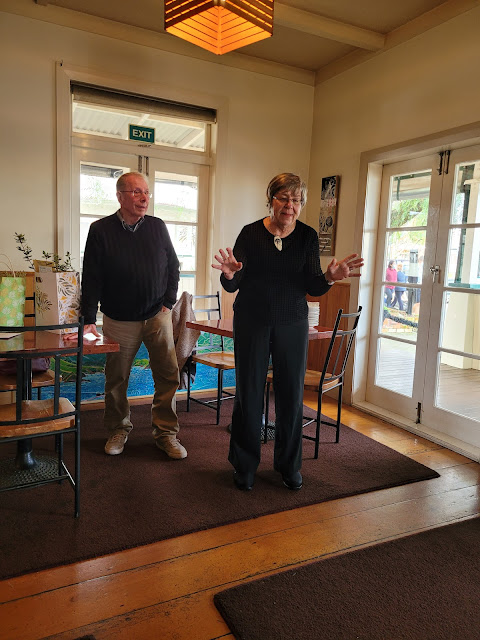 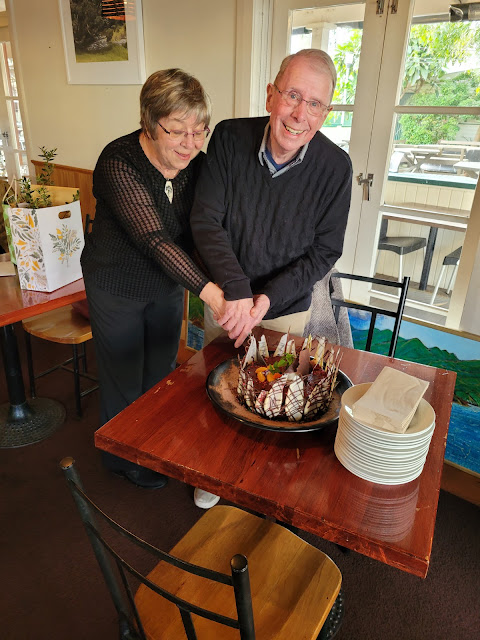 Cutting the cake, 50 years after the last one!

From that high point, things went downhill the next day with me testing positive for Covid.  Couldn't believe how quickly it came on.  Jennie tested positive shortly after.  Fortunately, the symptoms have been relatively mild with fatigue being the biggest issue.  Very sad that a number of our friends also became unwell although not seriously so.  It would appear that we became infected at a pub quiz earlier in the week but at least we won the quiz!  We've had to postpone a family gathering this weekend but not a big deal in the scheme of things as we'll get together again quite soon.

We had an email from friends in the UK who married a few weeks after us in 1972.  They attached a photo which we hadn't previously seen which was taken at their wedding.  It has Jennie standing with some mutual friends, Roberta and John; and it has special significance.  Roberta and Jennie were good friends at uni and John and I were mates at school.  They married the previous year and Roberta decided that Jennie and I would be good together.  We only found out later that Roberta pulled a number of devious tricks to make sure that it happened.  Pretty good judgment on Roberta's part!

So there we are, a bit of serendipity to offset the curse of Covid!

And in a non-relevant moment yesterday, we were blessed with a flock of Royal Spoonbills feeding in the harbour at the front of our house.  That's the first time we've seen them since we bought the place in 2003.  Absolutely majestic birds. 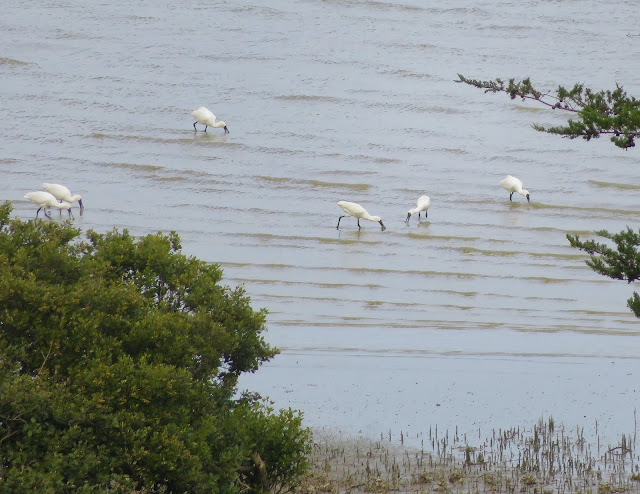