Global driving standards or the lack of 'em...... grrrr

I need to get something off my chest with a bit of a rant so bear with me! 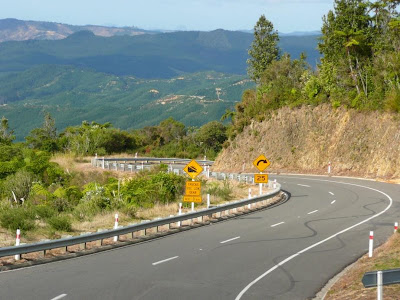 The Coromandel Peninsula where we live is a motorcycling Mecca - around 300-odd km of loop road comprising of twisties, sweepers and stuff-all straights; running by the coast and over a mountain range.  A technical, challenging road if ever there was one, particularly as a lot of it is relatively narrow with more than a few blind bends.  It's what every experienced rider craves and it doesn't disappoint.  On the downside, it has breathtaking scenery which means that it draws tourists both domestic and international to add to the local population.  Even then, it can hardly be described as overcrowded on most occasions. 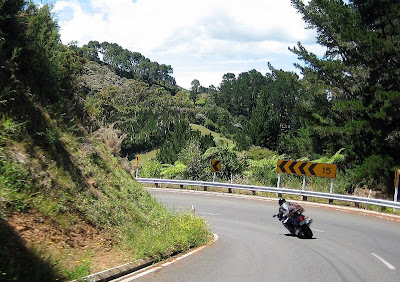 Me, decking everything on the Blackbird!

Idyllic you might say and to a large extent, it's true but there's one big blot on the landscape.  The big blot is the motoring public on 4 wheels trying to kill me at every opportunity!  I take a dim view of that and am known to get a mite testy.  All I can say is that I'm forever grateful that my advanced rider training instructor spent an inordinate amount of time on situational  awareness or I might not be writing this!


Tourist vans, rental cars, 4x4's towing boats (but only if the driver has a baseball cap and moustache - why is that???) - they're all out to get me but how, you may ask?  The favourite form of assassination is by straight-lining/offsiding corners, that's how!  Doesn't matter if you're closing on them from behind or they're coming towards you, show the knuckle-draggers a corner or a sequence of bends and they'll cut it, irrespective of what else is on the road.  Even better if a corner is completely blind. The look of complete surprise on their faces when they discover someone else occupying the correct lane on a collision course beggars belief - INCOMPETENT BASTARDS!  Sorry, built up quite a head of steam there!

Let's have a think about the business of straight-lining. In the UK for example, straight-lining (or whatever local term fits) is taught as an advanced riding technique to improve sight lines, less risk of binning it in adverse conditions and a whole heap of other advantages.  There's a critical word I've left out and that word is BUT! The BUT comes in association with the words ADVANCED and JUDICIOUS  in knowing when to apply the straight-lining technique.  In other words, let the average member of the motoring public go straight-lining and you have the potential for serious injury or death through poor situational awareness.

In NZ, you risk a hefty fine and demerit points on your license for straight-lining -  "failing to keep in your lane".  Given the propensity for straight-lining being used by people who are simply lazy or terminally stupid, perhaps staying well in your lane is good insurance.  I must admit that I use the technique a lot less than I used to although I do still shift position all over the road to get the best possible view when preparing to overtake or get a good forward sighting of conditions.  The debate about whether to straight line or not ran to 11 pages or so in the Kiwi Biker forum thread: Straight-lining corners or not? with good points raised by both sides, plus the normal amount of crap by people who can't be bothered to think deeply enough to put a good argument together.

I don't think there is a completely watertight argument on either side of the debate but do think there's something upon which we can all agree. The level and quality of instruction received when first learning to drive a car or motorcycle is woefully inadequate, at least in NZ and probably elsewhere.  This translates into putting other members of the public at risk as well as the perpetrators, especially you and me as more vulnerable motorcyclists. There are situational awareness techniques plus some others which are only taught at an advanced level, yet are simple enough to be taught to learners so why don't we do it to reduce the road toll?

Handling potentially dangerous industrial equipment usually requires high level training to operate it and yet operating a road vehicle where the consequences and high cost of accidents are beyond dispute only requires pretty basic instruction to get rolling.  Sounds crazy when you put it like that, doesn't it?

Anyway, rant now over and I feel better for it, especially as Jennie and I went out in the boat this morning and caught 9 snapper (6 for Jennie, 3 for me which is par for the course but who's complaining when there is great seafood going into the pan!).