Well, the title of this post sounds a bit preposterous but it's absolutely true!! Jennie and I recently commissioned a local craftsman to make us a 1.8 metre high oiled solid macrocarpa bookcase (the first picture shows it freshly unloaded from the trailer today!).  In anticipation of its arrival, I started sorting through a few old boxes of books that haven't been opened since I don't know when and looking on storage shelves to see what should go in the new bookcase and what can go to the local charity shop. 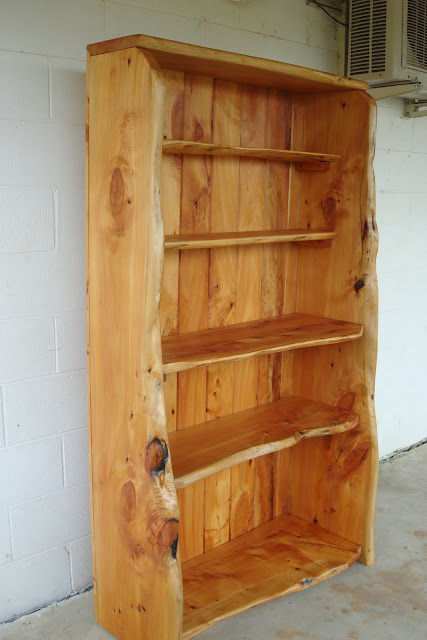 Sorting through old books wasn't exactly a riveting prospect but then Karma stepped in as it sometimes does in times of need!  Within a minute or so of starting rummaging, what should pop up but two Triumph maintenance manuals which haven't seen daylight for decades.  Not any old Triumph manuals, but one for the second bike I owned back in the 60's - a 3TA 350 (plus the T90, T100 and Speed Twin).  The other manual covers all Triumph twins manufactured from 1945 to 1962.  This latter manual says 10 shillings and sixpence in the flyleaf so I'm assuming that this was a 60's purchase too!  What's more, they're in pristine condition - not an oily thumbprint to be seen on any of the pages which is a bloody miracle!  (The handful of scanned pages I've posted here can be enlarged by double-clicking on them).  Also see HERE for a link to the fun to be had with the oil pressure relief valve!

As you might imagine, sorting books stopped immediately and has yet to re-commence as I leaf through these wonderful documents which have triggered so many memories. 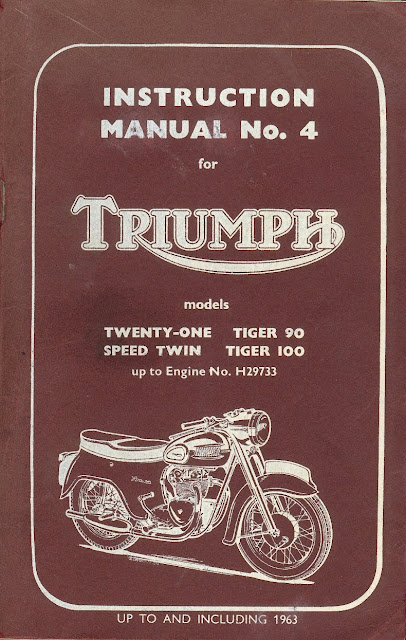 This brings back memories 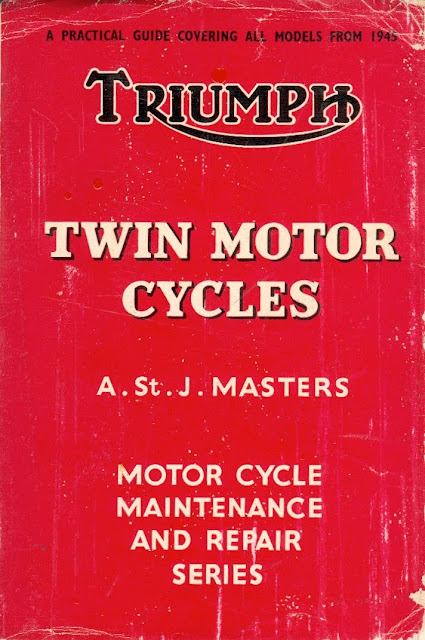 An even older manual

The first thought was how few special tools were required to completely strip the engines, which was just as well for an impoverished trainee mechanical engineer  who's bike was his only form of transport!  However, reading how to replace the tappet shafts brought a wry smile. The manual exhorts owners to buy a special tool (an overpriced skinny bit of split pipe with a chamfered bore if I remember correctly) to stop the O ring seals on the shafts being damaged on re-fitting and causing oil leaks.  To be honest, I think the Triumph Marketing Department had their collective tongues firmly planted in their cheeks when selling this tool.  Despite every care, mine still liberally dribbled oil all over the cooling fins.  However,  the wonderful smell from the weekly application of Gunk brand degreaser to remove it did offset the annoying effects of the leak to some extent! 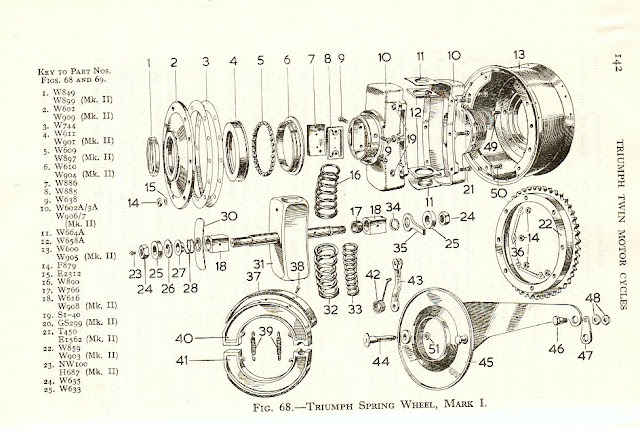 Although sprung hub Triumphs were a little before my time, I've heard chilling tales regarding the maintenance of these hubs and have posted a picture from the manual to show how they went together (err... or were abandoned in this state).  At the heart of this frightening device were blocks of rubber held in place by wicked springs under compression which would have taken the weight of a main battle tank.  I wonder how many owners on-sold their bike to some unwitting sucker rather than face rogue springs ricocheting round the shed destroying the contents and causing severe bodily harm.  Looking at it in a dispassionate manner, I suspect that military scientists used the Triumph Sprung Hub as the basis for modern anti-personnel weapons like the Claymore. 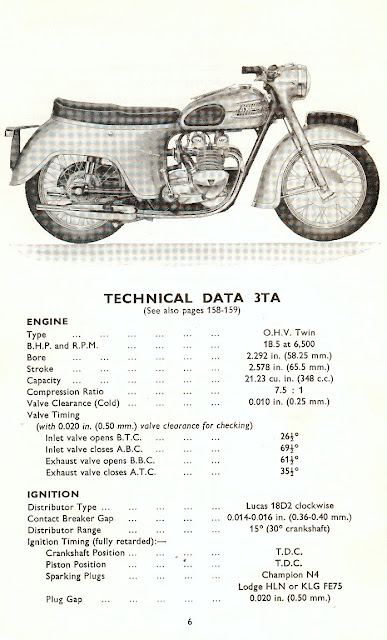 The other photo is part of the tech data sheet from the Triumph 350cc 3TA which I owned after selling my Suzuki 50.  The data sheet records a mere 18.5 bhp and allowing for Marketing Department hype, it might have been rather less.  Anyone reading my earlier account of being given a hiding by a newly-released Yamaha 100 twin would have seen the writing on the wall for the British bike industry and it was mainly that incident which caused me to sell it and buy a Tiger 100.  More power, but just as many oil leaks despite my best efforts!  Thank God it wasn't a Tiger 100A though.  Joe Lucas wasn't called the Prince of Darkness without good reason but the Energy Transfer ignition system fitted to the T100A was a triumph (no pun intended) of poor design and had owners spending more time running alongside the darned things than actually riding them.  Still, I suppose that fitness levels increased dramatically.

Before we finish these musings,  I also noticed that the headlight bulb was a 6 volt 30/24 watt Lucas item.  How we found our way anywhere in the dark without colliding with large, solid objects is probably testament to the ummmmm... modest performance of the bike and comparative lack of traffic rather than the headlight actually being effective.  Still, we lived through it all and are wiser (a debatable proposition) for having owned early British bikes!

Wonder what else I'll find in these fabulous books with their charmingly optimistic instructions?
Posted by Geoff James at 15:51