A Triumph of motorcycle design (not)

Modern Triumph motorcycles, along with most other modern bike brands are the epitome of good engineering.  The generation of riders who have grown up with modern bikes quite rightly expect high levels of reliability, but it wasn't always like that, oh dearie me no! Teeth-gnashing and loss of temper was a regular occurrence for the old farts among us.  At least we all became mechanically and electrically competent as a result of it all.

"Electrickery" problems were legendary and manufacturer Joseph Lucas wasn't called the Prince of Darkness for nothing.  However, it was a recent post about lubricants on a Triumph forum which took me back to the 60's when training as an engineer. Triumph motorcycles were my sole form of transport and as such, reliability was paramount to get me to lectures (and more importantly, the pub) in a timely manner.

Now, Triumph in particular produced some of the earliest oil-cooled engine designs on the planet.  At least, I'm assuming that was the main reason that there was more oil on the outside of the engine than sloshing around the internals, although woeful seal design could well have contributed!  The old joke about the first after-market accessory Triumph owners bought being a large drip tray wasn't all that far from the truth.  Anyway, I digress.....

Oil leaks aside, Triumph twins were pretty sound mechanically although there was one little device on them which had the potential to cause mayhem for the unwary.  Let me introduce you to the Oil Release Valve and Indicator: 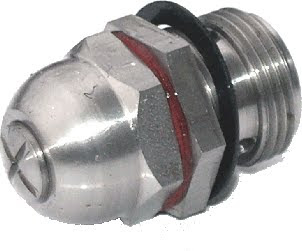 It served 2 main functions apart from the unintended one which I'll come to shortly.  The first function was as a pressure regulator for the lubrication system.  The second function was to visually demonstrate that the engine actually had oil pressure and wasn't about to lock solid and chuck the unfortunate rider up the road.  The photo below shows its location at the bottom of the timing gear cover on pre-unit construction Triumphs.  Later models saw it located on the engine block just in front of the timing cover. 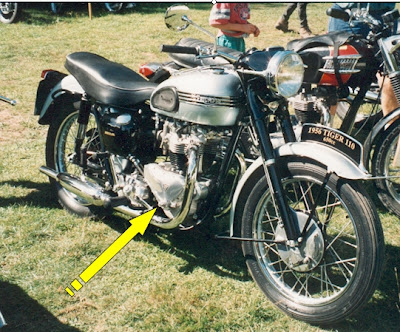 Location of the valve on a pre-unit construction Triumph

When the engine was running, the oil pressure lifted the cruciform-head screw (shown on the first photo) clear of the body to reassure the rider that the bike did indeed have oil pressure so that he or she could then concentrate on worrying whether the electrics would fail before reaching the intended destination.  So what's wrong with that you may ask - an enlightened bit of design, surely?  Well..... no, actually.

From the line drawing below, you'll note that part #5 is a piece of rubber tubing which slips over the indicator shaft to prevent hot pressurised oil from making its escape from this particular location.  Those of a cynical nature or legal persuasion will note the word "should" on the second line rather than the more reassuring word word "will" in terms of maintenance requirement.  In horse racing terminology, this wording must be equivalent of Triumph having a dollar each way, and with good reason. 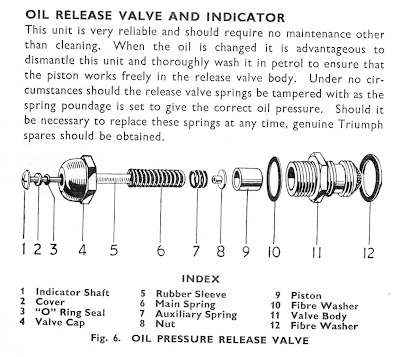 The problem was that in the environment it worked in, the rubber sleeve had a limited life before it perished or split, pumping hot oil out onto the rider's right boot.  At least Triumph riders had one dry sock in heavy rain, which I suppose was the only (unintended) good thing to come out of an engineering cock-up.  A close friend and I both owned Triumphs which waterproofed our right-hand boots every 6-12 months.  There was no real risk of running out of oil when this happened as the smokescreen from oil pouring onto a hot exhaust pipe was a fair indicator that something was amiss, even to the visually challenged.

Why Triumph shifted it to the front of the engine on later models is a bit of a mystery.  To see if the indicator was actually working required quite a forward stretch combined with a downward focus - not exactly an OSH-approved riding posture when tearing up the highway!  Also, although an oily boot was a thing of the past, oil now streamed round the crankcase and the slipstream neatly redirected it onto the rear tyre, adding another interesting dimension to already indifferent cornering.  After a few decades, Triumph came to their senses and did away with it altogether.  Only a tiny component but perhaps indicative of resistance to change and the eventual collapse of the British bike industry.

Who'd have thought that one tiny component would have been the subject of a (slightly) tongue-in-cheek bike blog?

As an aside, I still have 2 pristine Triumph manuals which are an endless source of amusement, particularly in terms of their earnest optimism. See HERE for more nostalgia.
Posted by Geoff James at 16:25