Alternative 2-wheeled technology and other stuff

It's been a pretty good and interesting few days!  Funny how you can go for weeks without anything significant happening and then all sorts of good things occur in the space of a few days.  The burst blood vessel in my right calf has now healed to the extent that it doesn't prevent most forms of physical activity which is marvellous now that the warm weather has arrived.

First test of the leg was going out in the boat for a spot of fishing with Jennie.  Gorgeous day but unfortunately, my lucky red shorts weren't so lucky as I had my line snapped twice by something big which had other ideas about being caught.  Everything else I caught was undersize.  Fortunately, Jennie is far better at fishing than I am (there.... I've publicly admitted it!) and she caught a decent Trevally and a snapper which made a very nice evening meal.  The leg handled the expedition fine, which was very good news indeed. 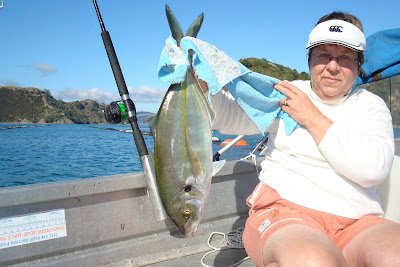 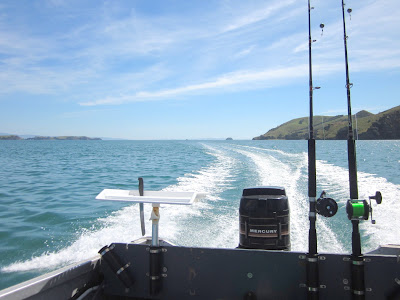 We also had my old corporate boss come to stay for the weekend. John is also a motorcyclist and has a Yamaha FZ1 Fazer.  Since I last saw him nearly 3 years ago, he's shed 15kg and turned into a very competitive ultra-distance extreme conditions mountain biker.  Last year, he competed in a 500 km endurance ride across Australia's Simpson Desert in 40 degrees C temperatures and this year, another in the Great Victorian Desert; 587 km long, finishing 5th which is remarkable seeing that he's 57 years of age.

Anyway, he brought his hi-tech mountain bike, a Surly Pugsley with him. An amazing bit of kit, unbelievably light with huge balloon tyres which are fantastic for most off-road conditions in snow, sand or anything in between.  The wheels on this bike weigh virtually nothing and with spokes offset from the centre line, they're certainly a technical bit of kit.  I might also add that the cost of these bikes is a sizeable percentage of a decent motorcycle! I took John to the very top of the Coromandel Peninsula in the 4x4 and he rode 40 km back down the dirt road to civilisation which has some wicked hills at the northern end as a light training ride!  Here are some photos of John in some scenic locations. 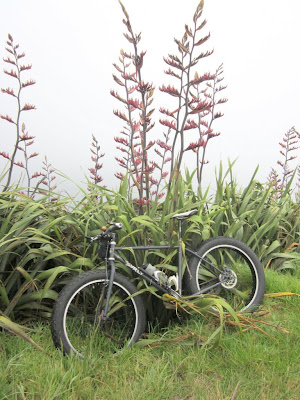 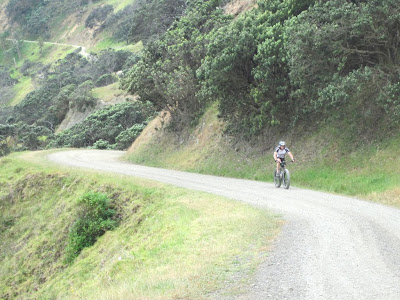 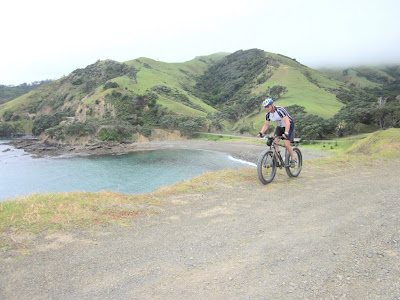 A long drop to a beautiful clear bay 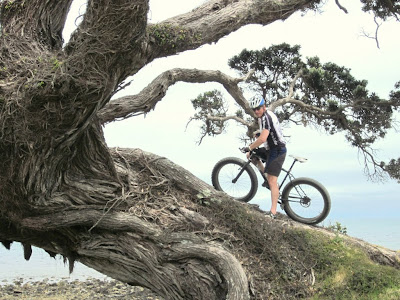 Barking up the wrong tree! (groan)

John's visit wasn't completely social and without going into detail, next year, I may come out of retirement for part of the time to help him out on a project.  I'm loving the freedom of retirement but here's an interesting philosophical thing.......  most of us count ourselves fortunate if our bosses are merely competent.  John is a true leader as opposed to just a good manager.  An outstanding visionary, treats everyone the same irrespective of status, gives his staff all the support they need, energises them and gives them the freedom to develop and flourish in the job.  A rare person indeed and I'd walk over broken glass for him, even though I'm normally a cynic when it comes to executive management behaviours in big corporates.  How many of us have been fortunate enough to have had bosses like that more than once or possibly twice in a lifetime?

The month-odd of not riding since the 1000-miler due to the burst blood vessel in my leg has been very trying to put it mildly.  Depressing would be another and more accurate description. Didn't expect to find a relatively short unplanned break from 2 wheels quite so hard to take.  Well Sonja, we made it back onto 2 wheels at pretty much the same time but at least I'm a bit warmer than you will be! 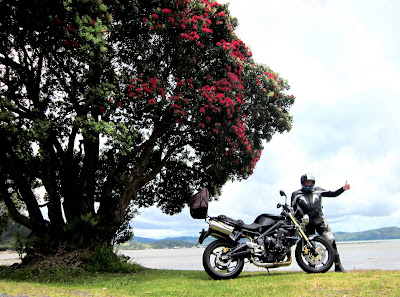 All is well with the world!

Even though it's only been just over a month, it was surprising just how rusty I felt and after just driving my barge of a 4x4 during in that period, the Triple felt super-sensitive and powerful.  Didn't do anything dumb, and practised situational awareness out loud to dial back in.  Sooooo good to be back on 2 wheels again and into my summer leathers now the good weather is here.  Besides, they make me look slimmer than I actually am!!!

Finally, Jennie recently received complete clearance from her hip operation this time last year which means that we can now make some decent travel plans outside the South Pacific at long last.  We're now booked to travel to Vietnam and Cambodia in April 2011.  Must surreptitiously look into hiring a bike up there!

Yep, it's been a great few days alright!