Coming home from very lonely places, all of us go a little mad: whether from great personal success, or just an all-night drive, we are the sole survivors of a world no one else has ever seen.
- John le Carre

I like John le Carre's quotation very much in light of the recent big ride through the night and it's particularly applicable to all motorcyclists who take the opportunity to reflect when they're out on a journey.  Alone but not lonely.  Experiencing something which is very personal and almost impossible to share.  Wonderful stuff.

It's also appropriate because I'm a little mad at present.  Didn't mention it in the 1000-miler blog post last week as it wasn't relevant to the ride itself but I have a problem which is stopping me from riding or doing much else at present.  Exceedingly frustrating given the superb run of weather we're having.

On the day of the big ride, I had a slightly sore calf and really didn't think much about it.  Not a clue whether I'd knocked it, strained it or whatever.  Just one of those things you take no notice of when you're busy with other things.  Anyway, the last 6 hours of the ride was more than a little uncomfortable with a throbbing leg which was clearly swelling.  On reaching home, the leg was starting to bruise badly and as Jennie is still in Australia,  one of our lovely neighbours (female of course, a guy neighbour would have just given me a beer and told me to harden up!) saw the pronounced limp and bullied me into going to the doctor.  To cut a long story short, the day ended with me driving to a hospital an hour away for an ultrasound to make sure that I hadn't got deep vein thrombosis.  The trip was almost worth it in that the technician was a very attractive young lady and having ultrasound gel massaged into your leg from groin to ankle for half an hour was a not altogether unpleasant experience (rolling of eyes and sighing from the female readers at this point).  However, the Goddess of Hospitals evened the score for having impure thoughts by making me wait for 2 hours in a corridor until a doctor was available.  The outcome was that a blood vessel had burst and caused a painful, but not risky haematoma and the treatment has been to sit on a couch for a week or longer with leg elevated.  Arrgh.... a terrible punishment.  Can't abide sitting about but have generally been a good boy so I can get back to riding in double quick time.  Don't want Jennie's mates ratting me out either. Just shuffle slowly round the house with a walking stick wincing at every step and feeling sorry for myself.

I might just add that the females in the vicinity haven't actually shown much sympathy after having initially nagged to get it checked out.  It's now just another version of that pathetic "man flu" as far as they're concerned.  Sigh.....

Anyway, I thought we'd have a break from bikes this time round.  You might remember an earlier post about an ornate carving knife that Jennie and I had commissioned which was made from Damascus Steel. We both love art objects which employ "traditional" skills and it's a real pleasure to support people who keep these arts alive.  Going back a few scant years, I used to sit on a government-led committee which ensured that employers who employed mechanical apprentices met their obligations and also received the appropriate support.  Part of this work involved visits to employers and one particular day will genuinely stay in the memory forever.

That day involved a trip to the town of Taupo and the visit was to a blacksmith who employed his adult son as an apprentice.  It was special enough in that blacksmithing apprenticeships must be as rare as hen's teeth anywhere on the planet but what rocked my world was that both the smith and his son had represented New Zealand at the World Smithing Championships on two or three occasions and had been highly placed.  This was going to be a very special occasion.

We were met at the forge by the smith, Brian McDonald.  I don't really know what a smith should look like, but if I was casting one for a movie, it would be Brian!  Around 60, not very tall but massive around the shoulders and arms, hands like bunches of bananas, silver hair and and an impressive silver walrus moustache, leather apron, thick glasses, cloth cap and blunt north of England accent - absolutely wonderful!  The son was was probably going to grow into a caricature of his dad.  The business derived its income from a base load of farrier-smithing (shoeing horses) and the rest from private art commissions.  We walked round the forge slack-jawed looking at work in progress - a dragon with a 2 metre wingspan, gate for a wine cellar with life-size bunches of grapes, leaves and vine tendrils twirling around the gate bars, all forged from wrought iron.  I could go on and on; it was genuine sensory overload.

However, it was two tiny objects which really caught my eye, just laying on an anvil.  One was a leaf and stem, about 2 1/2 inches long and the other was 1 single petal from a rose.  Both beaten from wrought iron and even had veins in them - simply exquisite.  I asked Brian what the story was and he said he'd just "knocked them up" to show his boy who was still the master!  I asked him what he was going to do with them now he'd proved his point and he said he was going to chuck them away.  The first thought was to ask him if I could have them as a souvenir but as it was Jennie's birthday in 2 weeks, the idea slowly formed about asking Brian to finish the rose as a gift.  Before we left, a deal had been struck and I told him that I'd bring Jennie down to pick it up on her birthday.

The due date arrived, we rocked up to the forge and I introduced Jennie to Brian with her expression clearly saying "What the hell are you up to?"  Brian pointed over to the anvil where the object sat. Not only had he made the rose to full scale, he'd also hand-forged a specimen vase for it to sit in, also from wrought iron. Every petal, every tiny bud case, every leaf and stalk had been hand-forged together, not drilled or welded. He'd also scoured it with a copper brush whilst still red-hot to give it a sheen. Jennie was on the edge of tears and all I could do was shake my head in wonder.  There are a few special occasions in life that lift the soul and this was indisputably one of them.  As well as being visually stunning, it's amazingly tactile and the weight is very reassuring.

Here are a few photos and if you think it's a nice object, it's better by a wide margin in the flesh.  What an utter privelege and humbling experience it is to meet people like Brian McDonald.  Human beings who absolutely enrich the world we live in. Click to enlarge the photos. 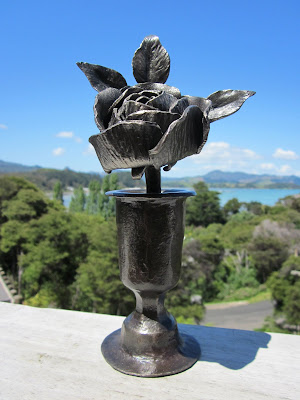 See the bud casings peeled back at the bottom of the rose? 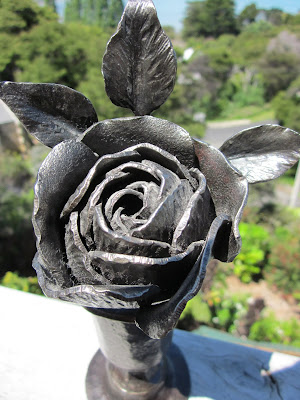 Close-up of veins and texture in petals and leaves 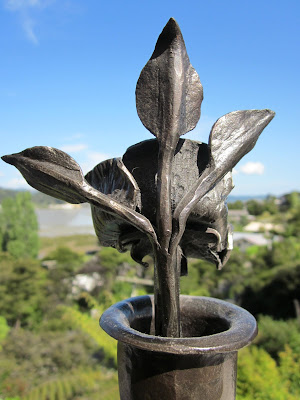 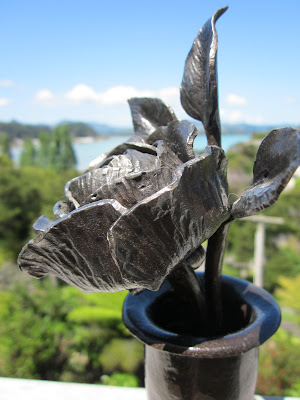 Another close-up of texture 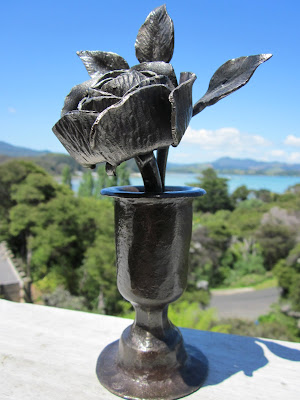 Another angle
Posted by Geoff James at 07:53