Autumn is absolutely the best time of year to ride a motorcycle on the Coromandel Peninsula where we live. The temperatures have dropped a bit meaning that wearing leathers is no longer your own personal sweat lodge!  More than that however, the number of tourists are dropping off and whilst the roads are rarely clogged, there is virtually nothing on them; especially on a weekday.  Monday chores taken care of in the morning and then it's off to play on the peninsula.  Thought I'd take you on out for a ride on our local roads so hop on board.  It's ok, I'm a careful rider, especially when there's precious cargo on the back, honestly!

Here we are in our front garden with the Triple all loaded up and waiting for me to stop stuffing about and get the riding gear on! 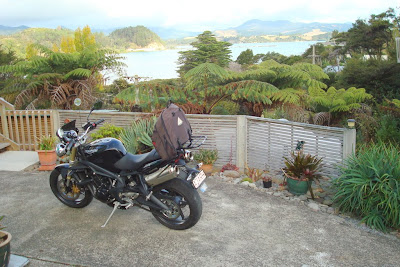 First stop is Kuaotunu beach, towards the east of the peninsula.  Parts of the Coromandel Peninsula and Firth of Thames is where the Bar-tailed Godwit lives.  So what you might ask?  This incredible bird begins its trek from NZ in late March to Alaska - some 11000 km in 5 or 6 days.....  almost unbelievable!  Sadly, they've all packed their bags and departed and there's just me (and you of course!) on the deserted beach contemplating the marvel of these amazing birds. 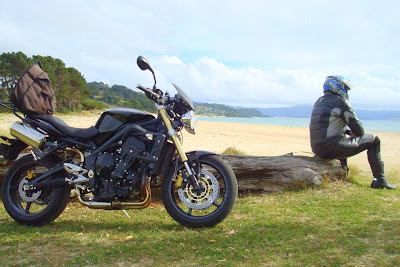 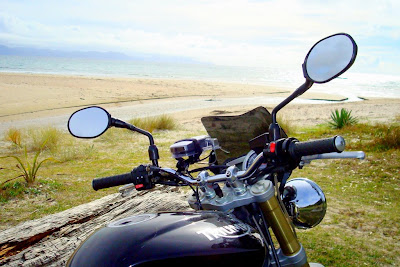 Next stop is the town of Whitianga on the east coast of the Peninsula.  Static population of around 5000 although it swells enormously in summer with tourists and holiday home owners.  I'm in two minds about this place.  Clean and tidy, good cafes and restaurants but some of the developments are unsympathetic and  make it look like a lot any other beachside development in the world.  I'm simply not sure what it's trying to be.  Guess the locals won't be giving me the keys to town anytime soon with remarks like that.  Really nice harbour and people though. 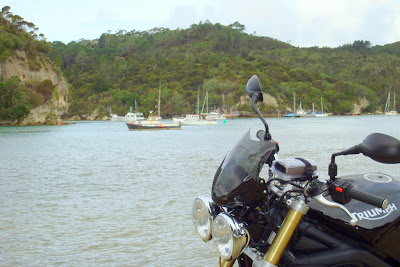 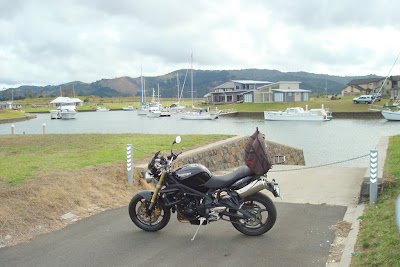 The man-made waterways above are in the process of construction and whilst nicely done, a couple of years will see the views totally blocked by developments.   Wonder how much silting will eventually occur as these are well over a kilometre inland.  This is a development that sort of grates with me.


Right, re-trace our route back to the west coast of the peninsula north of my home town of Coromandel where the coast remains pretty much undeveloped save for a few farms and forestry blocks.  Absolutely lovely and I can count the other vehicles I've seen for the last 20 or 30 kilometres on the fingers of one hand.  Twisty roads running right alongside the upper Firth of Thames - doesn't get much better than this! 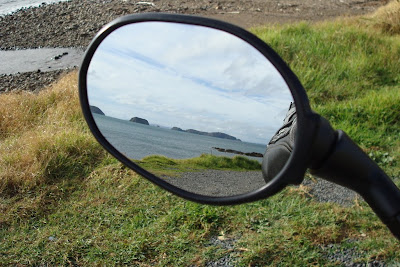 More twisties and a slight scare with unmarked gravel on a bend up the coast until the tiny settlement of Colville is reached - I LOVE this place!!!  Colville and the surrounding hills have a lot of alternative lifestylers who have been around since the hippy days of the 60's.  The dense native bush no doubt hides more than a few plants of a ummmm.... more recreational nature but the people are just lovely - always happy to chat or help out in any way they can.  The store shown in the photo is run by a local commune and the range of goods is amazing, including great tubs of beans and grains that no-one has ever heard of.  Want a mantle for your ancient camping lamp?  No problem, they're bound to have one.  From Colville north, the tar seal turns into a fairly well formed dirt road which runs up the coast for another 40 km to the top of the Peninsula. The Department of Conservation has a handful of well-maintained camping areas right by the water up here.  Fabulous for families, hikers (called trampers in NZ) and fishermen wanting solitude in stunning, unspoiled, safe surroundings. 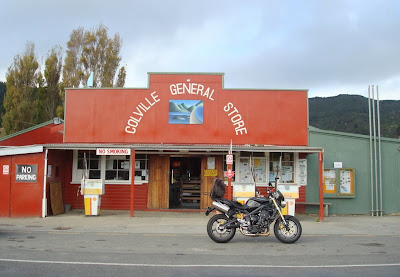 The afternoon is getting on and time to re-trace the route to Coromandel, my home town.  Coromandel has a population of around 1600 although this is considerably increased by tourists, particularly in the summer. Coromandel came to prominence in the 1800's when gold was discovered on the Peninsula.  Unlike Whitianga, Coromandel has kept its old buildings and the main street is utterly charming. 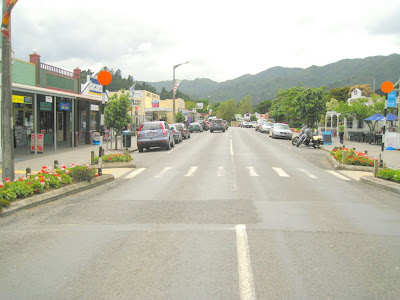 It's only a couple of kilometres to where we live down on the harbour so saddle up and head for the lookout near our house before the light fades.  The dots in the water near the island are commercial mussel beds and it's a wonderful area for fishing.  This is where Jennie and I anchor our runabout and occasionally take our kayaks for a good paddle. 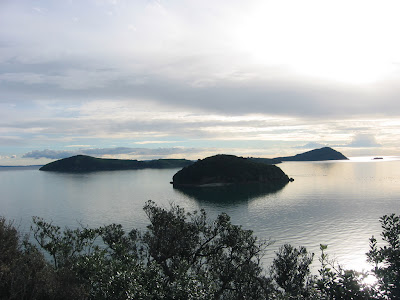 Well, its been a lovely afternoon's ride with almost no traffic and in gorgeous scenery that never fails to stir the soul.  Hope that you've enjoyed the journey as much as I have!