A brief departure from bikes......

Bikes aren't mentioned in this post but hope you don't mind as we are very proud parents.  We just got back from Christchurch in the south island where yesterday, our daughter Victoria was capped Master of Psychology.  A grand affair by the University of Canterbury held at City Hall followed by a superb congratulatory dinner at a French restaurant!


Victoria completed her thesis whilst working full time on violent offender rehabilitation within the NZ Justice system so it was a fantastic effort. I'll freely confess that my views on crime are to the right of Genghis Khan where offenders should have their heads displayed on long poles in city centres at the very least.  However, since I've found out about some of the significant long-term success stories in rehabilitating offenders with a troubled past, I must admit that my black and white views are softening a little.  In any event, I have nothing but admiration for people like Victoria who have an unwavering commitment to trying to help those who want to improve their lot.

For those who have already expressed their views on my lucky red fishing shorts in a previous post, you will be delighted to see that they don't feature in the photo below as I wanted to live past sunset.  Mind you, permission had to be gained from both Jennie and Victoria for the silk tie.  Guys apparently know nothing about fashion according to close female sources.  Or at least, there is ONE male according to the same female sources who is barely capable of dressing himself!!! 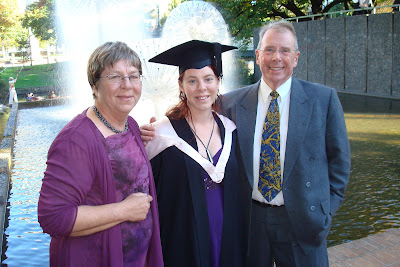 As an aside, we flew to Christchurch in absolutely stunning weather and the following 2 photos taken through the cabin window are of Mt Egmont, a dormant volcano in the north island and a portion of the Marlborough Sounds at the top of the south island - a mecca for water sports and fishing. 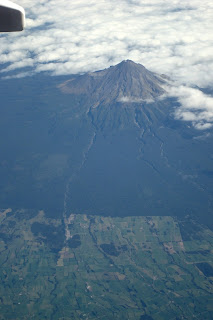 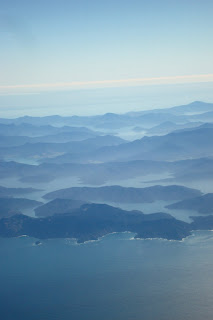