Road skills – what keeps you from harm? 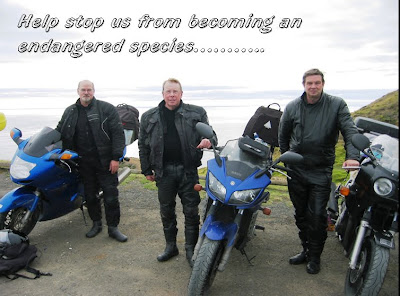 Riders in NZ are about to pay a whole lot more for annual motorcycle registration and I’m not happy, not happy at all. When I cough up for annual registration next month, I’ll be paying NZ$511 as opposed to the current fee of NZ$253. (The new fee being equivalent to $US363 or ₤230). It's not about money, it's the rationale for raising the fees.

This has come about partially as a result of laziness, incompetence and probably arrogance by our public servants in reviewing legislation and statistics covering injury/accidents. Let me explain....

In the mid 1970’s, legislation was introduced for an injury compensation scheme which signalled a significant shift in how New Zealand dealt with the consequences of injury. It proposed a move away from a litigious, fault-based system, toward a completely new ‘no-fault’ approach to compensation for personal injury.

The recommendations were for a national scheme that covered:

In general, this legislation has worked very well by largely keeping lawyers out of the equation and dealing with injury compensation quickly and fairly. Problem is, medical care costs have been rising at a higher rate than contributions to the scheme so increases are required.

The motorcycling community has been hit harder than any other single group. The proposed increases were in fact going to be significantly higher but nationwide protests have caused the increases to be lower than originally proposed, albeit still substantial. It wasn’t just the protest rides on parliament that caused the rethink, it was public questioning of the statistical basis used by public servants to justify these increases and in short, the justifications were found wanting; not only by motorcycle groups but by academics and others. Nonetheless, we still find ourselves saddled with increases based on dubious statistics.

In any case, simply increasing fees to meet increasing costs whilst failing to address the root causes is in my view, bordering on criminal incompetence by our public servants – a real “cost plus” mentality which is a drain on the public purse and does nothing to actually reduce injuries. This is what has outraged me more than anything.

Along with many other motorcyclists, I have made submissions based on raising the standard of compulsory training for both learner motorcycle and car drivers before they are able to attain a license but incredibly, there has been no response to date whatsoever by public policy makers.

There’s obviously a lot more detail behind the overview I’ve just covered but getting down to the nitty gritty, if I were to recommend a couple of additional skills to be introduced to inexperienced riders/drivers to reduce road accidents; what would they be?

When I undertook formal advanced roadcraft training in 2002, my instructor was the ex-head of driver training for the New Zealand Police, covering police motorcyclists, highway patrol, and special driving skills for groups such as Diplomatic Protection. In other words, here was a guy who really knew his craft. The first casualty on the course was my ego (massive damage!) but it became clear that the instructor had laid the platform for mitigating the risk of serious harm and for that, I’ll forever be in his debt. Although he taught me a wide range of techniques, the two aspects of roadcraft which he stressed as having the greatest impact on my well-being are:

Situational Awareness. This is a slightly fancy name for being aware of your surroundings. It’s incredible how few pure car drivers have good situational awareness and I’ll freely admit that prior to attending this course, my own skills were lacking; even having ridden a motorcycle for over 30 years at that stage. This isn’t the place to talk in detail about what exactly was taught but some of the techniques could easily be applied at a more basic level of training. An example of one such technique is what’s called the “12 second rule” where the rider or driver constantly scans the environment all round for a distance equivalent to the distance you’d cover in 12 seconds at the speed you are currently maintaining. If done properly, you’ll not only be aware of other vehicles and what they’re doing, but taking note of road surface conditions, side turnings, the potential for wildlife to run into the road and so on. Not rocket science at all, but still a life-saver.

Avoiding any implied criticism (and thereby life-threatening injuries) of my wife’s driving as she’s pretty darned good anyway, I subtly introduced her to the 12 second rule and it was noticeable how much more she subsequently picked up in the way of potential hazards and their mitigation. I know I’ve mentioned it in a previous post, but this video:  Great roads, great rides pt 1   and  Great roads, great rides pt 2 is the best I’ve ever come across in showing just how powerful good situational awareness is in keeping you safe. So why don’t we ram it home at a much earlier stage of riding or driving?

Emergency Braking. The instructor prefaced this part of the course by saying that one day, knowing just how hard I could safely brake would mean the difference between avoiding an incident or coming to serious harm. He was absolutely right. He taught “staged” braking which increases the force of braking without locking up and it was drummed into me with repeated practice until it became the norm in real life situations rather than just grabbing a handful and locking everything up with all the attendant risks. On the course, I ended up braking so hard under perfect control that my wrists and elbows were creaking and my wedding tackle was painfully wedged hard into the tank! I would never previously have dared brake that hard for fear of coming off.

We could go on and on about safe riding and driving techniques but my perceptions (in NZ at least) are that:

- Current standards to get a full licence are lamentably low.

- There are additional simple techniques which will reduce the risk of injury and which should be taught at beginner level.

- Raising the cost of licensing does nothing to address the root cause of accidents and therefore, accident statistics are unlikely to improve (and discriminates against those with a good record).

- You can never afford to stop learning. This may be apparent to more motorcyclists than pure car drivers, many of whom seem to think that a full licence means that they are adequately equipped for the rest of their lives.

- Don’t rely on public servants (including politicians) to come up with an effective answer. They will do what is politically expedient, not necessarily an effective solution. To support this contention, a close friend and riding partner is a senior engineer within a government department dealing with all manner of transport issues. A fair amount of his time is spent undertaking objective analysis (filtering might be a better description!) of proposals by public policymakers who have little idea of the impact of their proposals. These are my words, but I think he partially sees himself as a gatekeeper to rule out the ideas of fools if anyone will listen!

Road safety is a complex subject and I’m far from being an expert. I do know however that WE and no-one else have primary responsibility for our own safety and consequently, we also have the responsibility to continually raise our skills, both for our sake and the sake of our loved ones. If we wait for leadership from others, Hell will freeze over first.

Hope that I’ve stirred a few thoughts about how we ride safely and our personal responsibilities. I don't have the answers but at least by raising my personal skills, especially situational awareness; I'm better protected than I used to be.

Addendum:  See the post HERE which summarises the direction I chose to raise my skills with the IAM (Institute of Advanced Motorists) in New Zealand.  Literally the best thing I've ever done on 2 wheels. 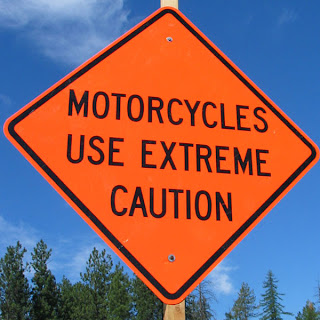