Wheel alignment - improve your handling at no cost

About 7 years ago, thinking about the impact of good wheel alignment stirred what Jennie laughingly refers to as my brain!  I'd had some new tyres fitted and wasn't happy with the handling.  New tyres always feel a bit odd until you get used to them anyway but in this instance, the turn-in to corners felt different depending on whether I was going into left or right-handers.  It bothered me enough to use the time-honoured string line method of checking and sure enough, the rear wheel was significantly out of alignment.  The improvement was noticeable when properly aligned.

Moral of the story: Correct wheel alignment makes a big difference to the handling if it's accurate. You shouldn’t rely on a new rear tyre being correctly aligned when fitted at a tyre shop unless they have good gear and maker's graduations on the swing arm are not necessarily to be trusted either. There can be enough play in the components to throw alignment out.  In addition, each time the chain is adjusted, you run the risk of shifting the alignment. Using string lines works just fine, but is time-consuming to set up and care is required to take the actual measurements (Not to mention tripping over them at regular intervals or having the cat decide that the string is there for entertainment purposes!)

After this episode, I got to wondering about using the same principle as string line alignment but substituting the string for a laser instead. No cumbersome setting up and hopefully nothing for the cat to attack. The prototype rig was constructed in 2004 and intentionally made from materials which I already had at home and it has been so successful that I've never got round to making a fully adjustable one to cater for a range of tyre widths. There are multiple permutations on the design shown, and also variations in the way it can be used. However, let's go through the principles with a few photos and you can decide whether it's worthwhile building one and if so, whether you want to improve on the design. Click on the photos to enlarge them. 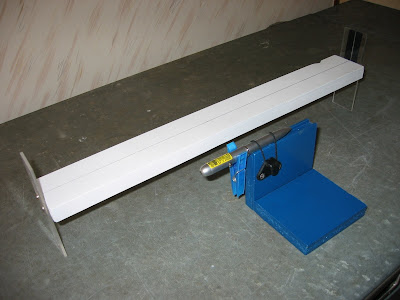 The rig is constructed in two parts: the laser beam emitter/support bracket (blue) and the laser light target (white).  The laser emitter is a cheap laser pointer combined with a pen, but single purpose laser pointers can be obtained cheaply from electronics and office supplies shops etc.

The support bracket is constructed from MDF. It should be recessed in the top to provide stability to the laser pointer. In this case, two 3mm pieces of MDF were sandwiched to a wider piece of MDF. The pointer is held in place with elastic. A spring clothes peg is used to keep the laser switched on. The centre line of the laser is 90mm above datum, which is close to the maximum height that can be used for a Honda Blackbird on its centre stand with a 6mm ride height spacer under the shock absorber without interfering with the laser beam. (You can use a bit of wood under the centre stand to get better clearances if this is an issue).

The laser target is constructed from a piece of straight dressed timber painted white, with Perspex end-pieces. The overall length is 500 mm, the height above datum of the timber surface is 80 mm and the height of the Perspex end-pieces is 130mm. The timber is 58mm wide with a centre line marked on it. The centre line of 29mm equates to half the difference between the widths of the front and rear tyres I use. If this is different for other tyre combinations, it doesn’t really matter as a steel rule can be used to measure how far away the laser beam is from the edge of the front tyre. 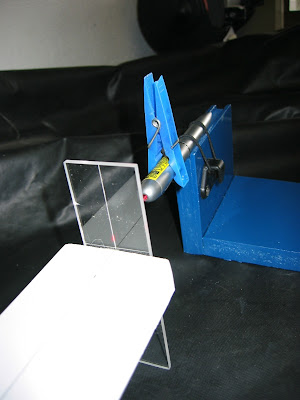 Both end-pieces have a vertical line scored in them with a scriber. The score lines are on the inside faces of the Perspex. This helps to slightly scatter the laser light on the line and make alignment easier (much like a rifle sight). The target end piece has a strip of black insulating tape behind it to make the laser easier to see.  The second and third photos show the target being struck by the laser beam. 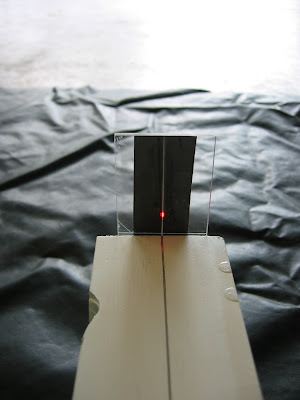 How to use the rig:
The first photo in this section simply shows the general arrangement of the rig. 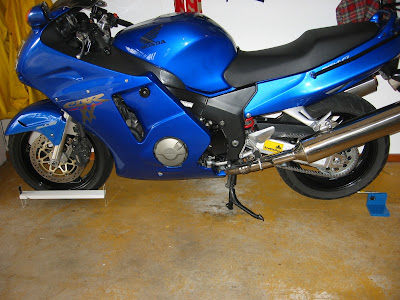 Prior to commencing the alignment process, spin the front and rear tyres to look for any significant oscillation on the widest part of the tyre wall. The laser beam can be helpful for this purpose. If the rims are in good order and the tyre has been fitted properly, it will be negligible. If any movement is >1-2mm, then position the wheel so that the laser is roughly at mid-point of the oscillation. 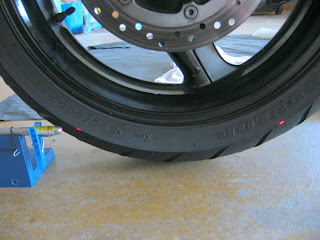 Align the front wheel as close as possible to the centre line of the bike by eye. The target part of the rig is then pushed up against the front tyre. It can be held in place with light elastic if there is any concern over possible movement. The laser emitter and support assembly are placed at the back of the rear tyre so that the beam just kisses the widest part of the tyre front and aft.  This will take a bit of practice with a small diameter beam to make the fine adjustments, but isn't difficult. The photo shows shows the inner part of the beam just touching front and aft rear at maximum tyre width. 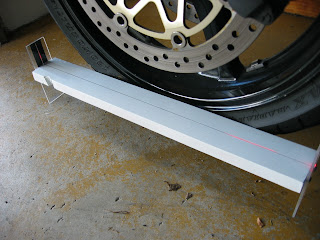 Turn the forks until the laser beam lines up with the lines on the Perspex end plates, or runs parallel with it. This is shown in the next photo. In the latter case, measure the distance from the beam to the widest part of the tyre. 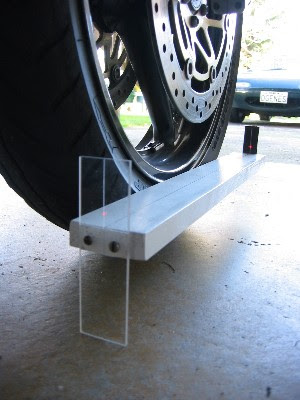 Move both parts of the alignment rig to the other side of the bike without disturbing the front wheel . If the distance of the laser beam from the widest part of the tyre is identical to the measurement on the other side of the front wheel, then it is properly aligned.  This is shown in the following 2 photos which show the laser beam striking the centre line of the target on both sides of the bike.  If not, then tweak one of the adjusters and re-check alignment.  Just a reminder, the centre line of this prototype is half the difference of the maximum (inflated) widths of a 180 section rear tyre and a 120 front.  It wouldn't be hard to make an adjustable one or simply measure any variation with a steel rule provided that alignment on both sides of the bike is identical.

Re-check the alignment when tightening the rear axle to ensure that nothing has moved. A suggestion to increase the interval between full alignments is to scratch some small alignment marks on the swing arm and adjusters if the stock ones are inaccurate. Eccentric adjusters for chain tension require a slightly different approach but the principle is identical. 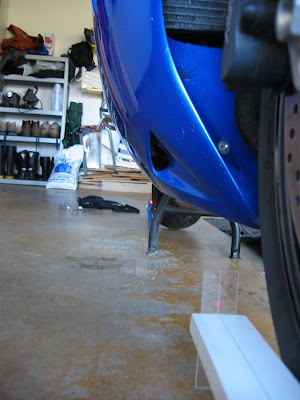 Well there we are - a simple (and cheap) device which will allow you to check and set wheel alignment accurately.  My instructions are probably as clear as mud but if you have any doubts, build a simple 2-dimensional model from a bit of card to sort out the principles.  They are straightforward, but visualising them and having something in your hands at the same time might be even easier.

If all else fails, you'll find my email address near the top of the blog. I'll do my best to help if you get stuck!


Addendum:
When I sold the Blackbird and bought a Street Triple which had different width tyres, I experimented with a different approach to the front wheel "target".  Instead of a piece of straight wood with "gunsights", I simply used a tape measure which was placed at the maximum width of the front tyre, both at the rear and front to make sure the front and rear tyres were parallel.  This is is repeated on both sides of the bike to determine the degree of misalignment and/or offset.  As with the methodology listed above, it's simply a matter of subtracting the difference between front and rear tyre maximum widths and halving the result to get the calculated offset on one side.  The photo and sketch below show the methodology for the Michelin PR3 tyre which I was using at the time. 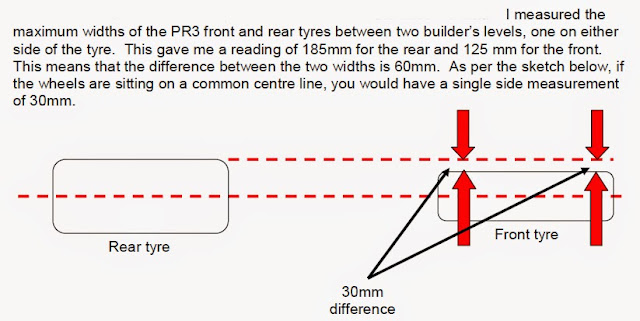 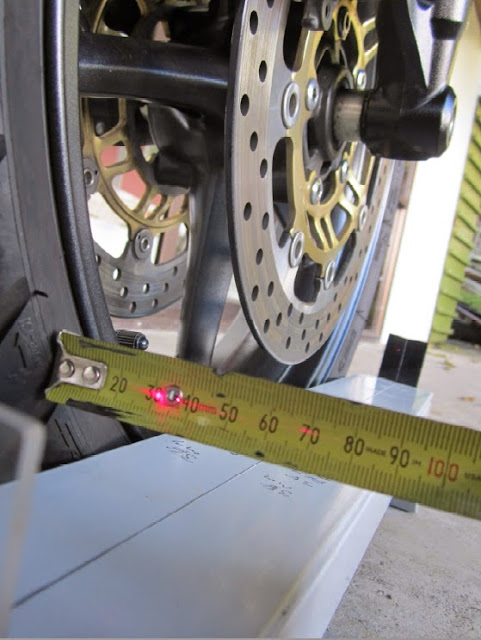