A ride of two halves

Looking ugly
I guess we've all been in this position: a ride which has been organised for a while, weather looking distinctly "iffy" - do we abort or go ahead anyway?

Last weekend, we'd organised a get-together for our bunch of close friends who are doing the Grand Challenge endurance ride in October for a general chat about the event and to get used to riding together at a reasonable pace again. Trouble is, we live a good couple of hours' ride from each other and with all the weekend commitments we have, cancelling a meeting is not to be taken lightly.

Enter the good old New Zealand weather! Coming out of winter, it's warming up nicely but rainfall can be a bit unpredictable. Wouldn't you know it but 2 days before the planned ride, a weather system from the tropics started dumping huge amounts of rain on the eastern side of the north island - fields flooded and some rivers overflowing. The forecast for the day of the ride was moderately encouraging, particularly the western component but as we needed some decent wet weather practice anyway, the decision was made to stop being a bunch of girls (sorry girls, you're probably braver than us guys!) and ride anyway.

441 km of mainly twisty back roads
I left Coromandel for the first rendezvous point in light drizzle which was ok.   What was not ok were the literally dozens of small slips from the cliffs lining the coast road south, caused by torrential rain over the 2 previous days.  The bigger ones blocked part of one lane which simply required care when going past so as not to collect something large coming the other way.  The major problem was where road crews had used a front end loader to scoop up slips already and in doing so, had spread clay across the whole width of the road.  Not only treacherous but makes one heck of a mess of the bike as it bakes on. 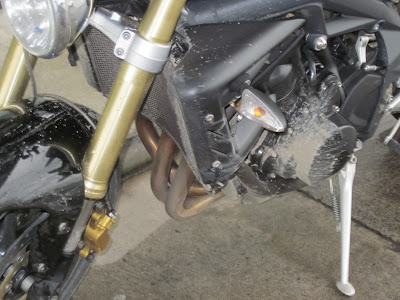 The first of many clay coats
Arriving in the small rural town of Paeroa (motto: Listen for the Banjos *joke, honestly*) and waiting for Andy to turn up from Auckland, I decided to photograph Paeroa's one and only landmark, a giant Lemon and Paeroa bottle.  L and P as it's commonly known, is for NZ what Coca Cola is for the USA.  NZ's national soft drink is a refreshing lemon-flavoured carbonated beverage and used to be manufactured in Paeroa until the big corporates got their paws on the brand.  So there you are, education as well as entertainment at no extra cost! 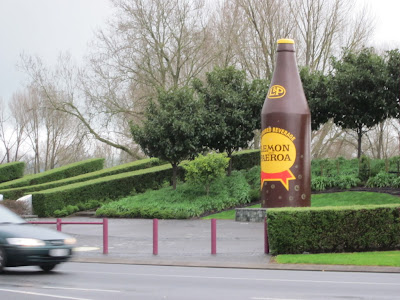 Family size bottle
There were a few minutes delay as Andy and I had arranged to meet at Paeroa's gas station.  What neither of us had realised is that incredibly, it has TWO gas stations and of course, Murphy's Law had placed us at each of them!  Confusion over, we headed off in moderate rain to meet Richard at the next town of Te Aroha (motto: Handy to Paeroa *another joke, honestly*), which is even smaller than where we'd just come from.  Arriving at exactly the same time, we all parked up for a quick chat.  The place was empty and the uncharitable thought was that the locals had to be back in their coffins by dawn.   Of course, it could have been the weather as it really started to chuck it down.

The first part of the route from Te Aroha to our final rendezvous/lunch spot at the Okoroire Hotel in the South Waikato district is down a road ominously called The Old Coach Road which runs close to the foot of  the Kaimai mountain range.  Narrow and bumpy at the best of times, the heavy rain added an extra dimension in the shape of standing water in the hollows.  Like true friends everywhere, Andy and Richard put me up front to give early warning of any potential hazards which they could then avoid whilst I was sliding along the road on my face.  Many fields were flooded right to the roadside and the cows looked pretty dejected.  More than a few standing water pools caused the bike to dance around a bit. However, the Triple took it all in its stride and the Avon Storm 2 Ultra tyres I'd recently fitted lived up to their reputation for superb performance in wet weather.  Also importantly, all the wet weather gear functioned as it should and the newly-applied Nikwax Visor Proof allowed the raindrops to bead off instantly, giving excellent visibility. 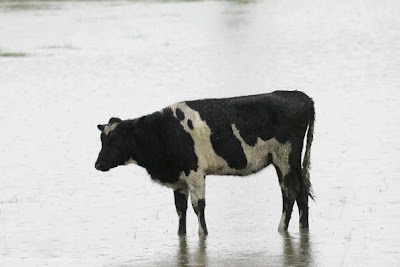 Where's my breakfast???
About 20 km from our destination, my radar detector gave a squawk and then stopped.  Seconds later, it squawked again more insistently and the immediate action was to roll off the throttle although we probably weren't much over the limit if at all, because of the weather. The display was showing Ka band which meant that there was either a mobile speed camera or the Highway Patrol in the area.  A few minutes later, a patrol car appeared from out of the murk and I was impressed with the warning we got - must have been 4km or so from first contact.

Having laughed at the worst the weather could throw at us, the Fates decided that we needed a wake-up call.  A few hundred metres before the turn-off to the Okoroire hotel, a truck coming the other way lost a tyre.  I'm not talking about a bit of tyre, a WHOLE big truck tyre jumped off the rim and came rolling down the road towards us less than 50 metres away at open highway speed!  The steel retaining plate must have mercifully come off a bit earlier. We only noticed it as it speared off from the truck's direction at a shallow angle towards us.  Fortunately, we were past by the time it crossed into our lane, otherwise, the consequences could have been disastrous.  With the miserable weather, traffic was light and we lost sight of it disappearing into a ditch before we turned off.

Arriving at the Okoroire Hotel, the two Johns had pulled in less than 5 minutes in front of us - great timing.  They had only travelled 30 km to get there as opposed to about 180 km for the rest of us and thought we were crazy for riding in the prevailing conditions.  The Okoroire Hotel is a popular hang-out for motorcyclists and it's perhaps it's a fair commentary on the weather that only one other rider turned up the whole time we were there! 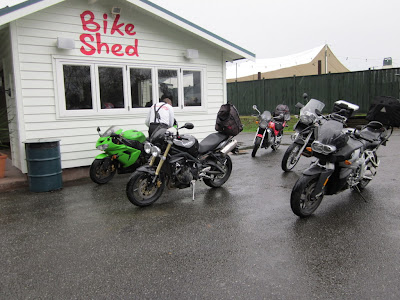 Our old friend John P introduced us to John H, a mate of his from boarding school a few decades ago.  John H rides a Kawasaki ZX10R - massive horsepower, seat like a plank, racer crouch, lots of load on the wrists and knees AND HE INTENDS TO RIDE 1000 MILES IN 24 HOURS WITH US.  A certifiable lunatic who is going to be in a world of pain.  Hope he has medical insurance! 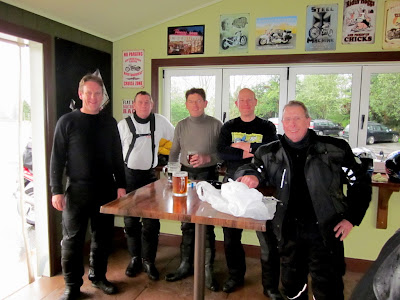 Andy, John H, John P, Richard and an old fart (errr..me) drying out
Hot coffee, chips and various other edibles were ordered and suddenly, the world seemed a much brighter place.  After talking about the big ride to our mates who hadn't done it before and filling empty stomachs, a quick look out the window was encouraging.  The rain was still coming down but there was a band of bright light on the horizon out west where we were heading next for afternoon tea at Richard's house, some 100 km away.

Getting under way, the rain progressively eased, then stopped altogether and with drying roads, a bit of pace could be injected down the country lanes - just what we needed with all those lovely twisties.  Following directly behind Andy's BMW K1200R since he removed the restrictor from his Lazer sports muffler was a weird experience.  At certain revs under hard acceleration, the harmonics from his exhaust and the note from the Street Triple airbox merged, caused a really unpleasant resonance in my head which was quite disorientating!  Must watch out for that in future.

Arriving at Richard's lovely house way out in the countryside, we were treated to fresh chocolate cake and whipped cream plus magnificent cookies, all made by Richard and his wife Maxine.  Sitting in warm sun on their deck relaxing, it was hard to believe the unpleasant conditions we'd ridden through out east.

Soon, it was time to split up and head home.  A thought occurred that with true friends everywhere, you can spend weeks and months without seeing each other but the moment you meet up again, it's like you've never been away. A few cheerios and "see you in a couple of weeks or so" and we were all off to our respective homes. 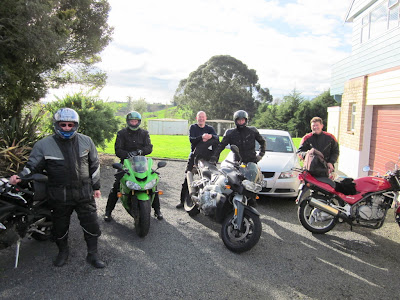 Off home to the 4 points of the compass
The ride home was wonderful, most of it being on good quality country lanes with minimal traffic and dry roads, although there were still big black clouds covering the Coromandel mountain range in the direction I was heading.  Fortunately, the rain stayed in the hills but the 50 km northbound run up the Coromandel coast road was extremely demanding.  When the sinking sun shone through gaps in the heavy cloud, the sun strike was just terrible with the reflection off the sea and it was impossible to see the clay which had been spread about in the mornings' clean-up of slips.  Added to those hazards was the strobe effect as the sun flickered through the line of pohutukawa trees on the shoreline - easy to see why it can trigger epileptic attacks in some people.

Descending off the last set of hills before Coromandel town, heavy cloud cover rolled over the harbour, leaving an eerie light so I stopped briefly and took a photo.  Here it is: 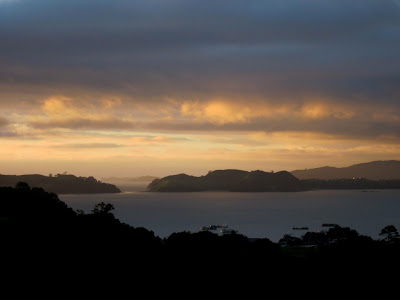 Coromandel Harbour in a weird light
By the time I'd ridden the remaining 6 or 7 km to the part of the harbour we live on, the sun had dropped below the cloud base and lit up the sky, land and water with orange fire - almost apocalyptic.  Got a photo of that too! 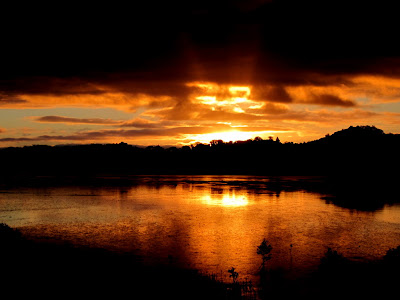 Wyuna Bay at sundown
All in all, a wonderful day shared with great friends that I wouldn't have missed for the world.  441 km covered in a whole range of weather conditions. Great that we all bit the bullet and decided to turn out on a day that didn't start on an exactly promising note.  Besides, it was great skill-sharpening for us all and is another indicator of why motorcyclists are a bit "different" from a large percentage of the rest of humanity **grin**