A place in the sun

At the end of July, Jennie and I celebrated our 38th wedding anniversary. Ever since the 10th anniversary, it's been a tradition that we take turns to organise a secret destination to go and celebrate our good fortune (Well.... my good fortune to be married to Jennie anyway!)  When the kids were smaller, our friends would look after them whilst we went off for an ahem..... dirty weekend to somewhere not too far away.  Once they were independent, the destinations became much wider! The trick is to keep the destination a secret from each other for as long as possible by months of misdirection and outright lies.  I've even been previously threatened with bodily harm if I didn't give a hint of what clothes to pack!

Anyway, it was my turn this year and the destination was a no-brainer.  Injecting a slightly emotional note for a moment, our Melbourne-based son and his family were holidaying in Western Samoa in October last year when the earthquake and tsunami struck.  It was his quick-thinking that saved them (literally by a couple of metres).  They lost everything but their lives and heartbreakingly, the people right behind them when they ran for high ground weren't so fortunate.  Despite the level of destruction, the Samoan people were simply magnificent, going way, way beyond what was reasonably expected to look after visitors to their islands.  Because of the breakdown in international communications, the 48 hours following the tsunami were the darkest days of our lives and when the call finally came, there wasn't a dry handkerchief in the house.  We contributed to the relief fund at the time but that paled into insignificance compared with actually visiting Samoa, putting something directly into the economy and saying thank you personally so that was our destination taken care of!  I might add that Jennie didn't find out our destination until we were standing at the check-in counter at Auckland airport.  The Chief Executive was well-pleased!

It's a 3.5 hour flight north from Auckland and jumping from a 15 degree Celsius winter day in NZ to a 29 degree Samoan winter day is is a very welcome step change.  We've holidayed all around the South Pacific but never before in Samoa. It certainly didn't disappoint. The entire population was genuinely welcoming and went out of their way to ensure that everyone had a great time - very humbling.  The scenery and facilities were magnificent, recommended to anyone wanting a holiday in a laid-back and unspoiled country.  We aren't ones for laying on the beach all day so it was pretty much full on swimming, kayaking, touring round the country and learning about the culture of Samoa. (Errr... not to mention great eating and working our way through the extensive cocktail menu where we stayed at the outstanding Sinalei Reef Resort.  Couldn't be faulted in any way). 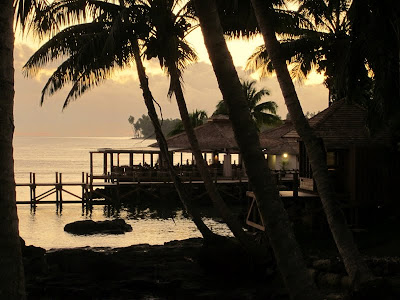 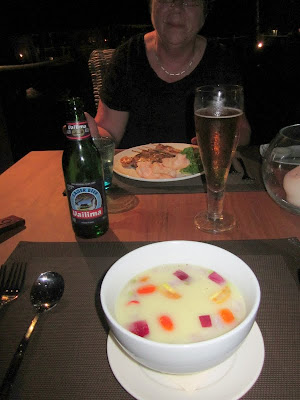 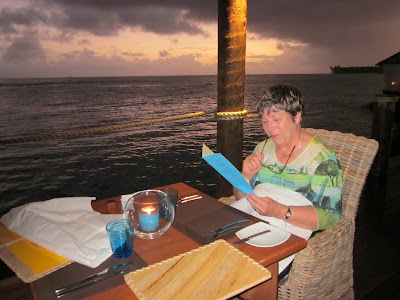 And what cocktail will it be tonight, Madame? 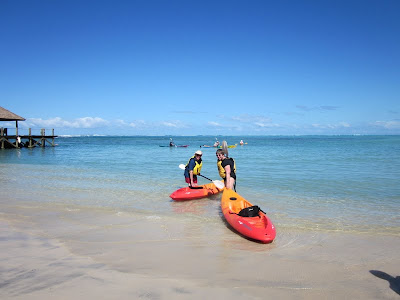 Working off too much food with a bit of kayaking 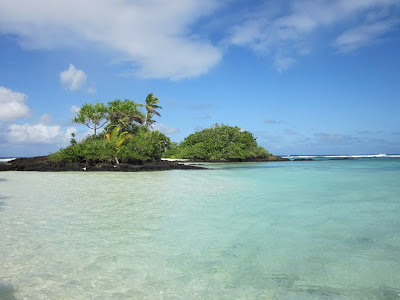 ..... or a swim in crystal clear warm tropical waters 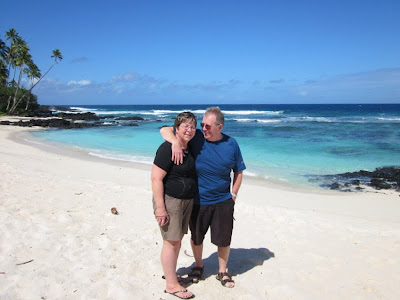 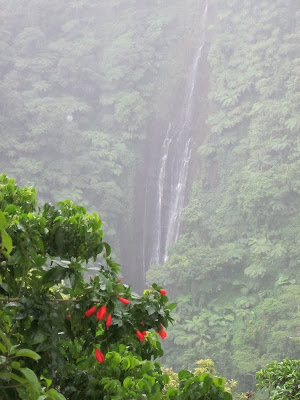 A tramp through the bush  to a waterfall 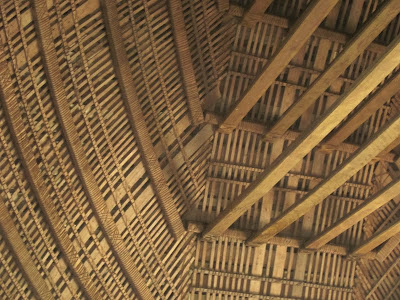 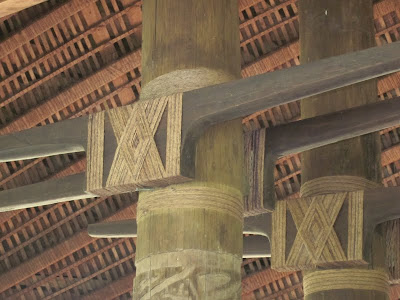 Exquisite rope lashings as part of a roof assembly 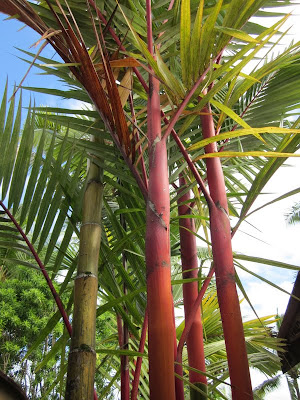 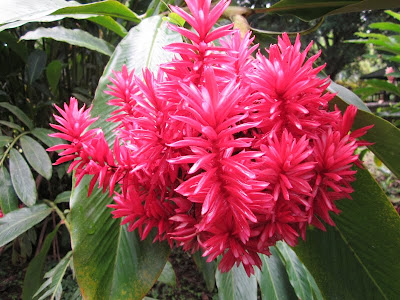 On a more sombre note, we were privileged to visit the area which the tsunami hit hardest and thank the people who looked after our son and his family so well during the aftermath.  We were both deeply affected and despite international aid 9 months since the event, some villagers are still living in marginal conditions among the ruins of their villages. 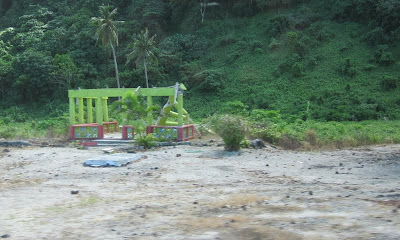 Living amongst the tsunami wreckage


One other thing which we learned made us feel pretty uncomfortable and more than a little saddened.  Take a look at the following 2 pictures. 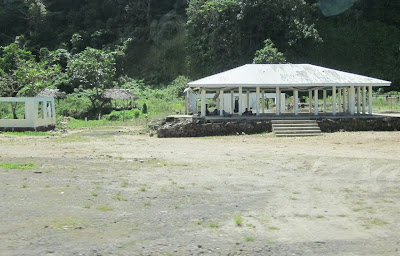 The fale (pronounced far-lay) in the foreground is a typical Samoan home.  Just one open plan room which is bedroom, kitchen, living room all in one.  Cloth or palm woven mats are suspended between the uprights for privacy or in bad weather.  There's high unemployment and for those who are fortunate enough to work, incomes are generally low.

Here's the next picture: 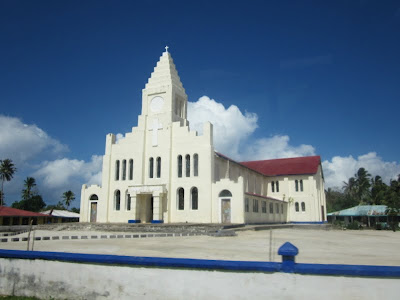 This is a village church, larger than some but not hugely so.  It doesn't seem to matter what denomination, the churches are all built on a grand scale and so are the clergy's houses.  Several locals told us that up to 65% of their income has to go to supporting the Church presence which doesn't leave much for supporting their own families and getting ahead in life.  I doubt that having only visited the country for 9 days, we have any real right to pass judgement but church piety doesn't seem to be in evidence to any visible extent. Looking after spiritual needs is fine but there isn't much evidence of pragmatic, practical assistance to the local parishioners; certainly not to those who are still affected by the tsunami.   More the other way round if anything.  It left us with the impression that western religious practices and island cultures do not sit together easily, despite the Samoan people being deeply religious.

Not only was our stay a wonderful experience due to a stunningly beautiful island, it was really made by the personal family connection through near tragedy with the incredibly warm, unconditional welcome by the islanders themselves.  To finish off, virtually every New Zealander we met holidaying in Samoa was there by choice to put money into rebuilding the economy.  If anyone else is looking for a holiday destination, you won't be disappointed.

Oh yes, an amazing postscript to the tsunami story.  Our son and family lost everything but the clothes they stood up in.  Six months ago, a local found a battered camera washed up on the beach and took it to someone at the Tsunami Co-ordination Centre.  Although the camera was completely wrecked, the card was in perfect condition.  From the photographs, they tracked down our son and returned all the photos to him.  *Karma*. 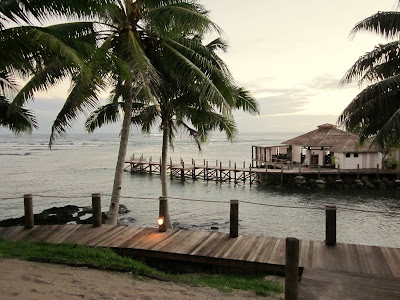 Back to motorcycling next time!
Posted by Geoff James at 20:23