I might just be sounding like everyone's mother here, but I've worn ear protection on the bike for open road riding for years, simply because working in heavy industry pre-retirement; it was a sensible habit to maintain.  This was reinforced about 5 years ago when a UK bike magazine tested a range of both cheap and expensive helmets and not one of them was less than 100 dBA at the ear entrance.  Dunno whether things have improved since then but why take the risk?  Most motorcyclists are concerned about safety in terms of buying good quality riding gear, yet a significant number of riders I know do little or nothing to protect their hearing.

I started off by "souveniring" yellow foam plugs from work, as per the picture below.  They were effective but the dense foam pressed hard on the inside of the ear canal and became a distraction on longer journeys.  A different brand were in use at another branch of the company and in the interests of safety research (errr... and comfortable motorcycling), a handful were liberated.  These are the green Max Lite plugs shown on the left of the picture and they work a treat.  Softer than the yellow ones, easier to insert and just as effective as far as I'm concerned. 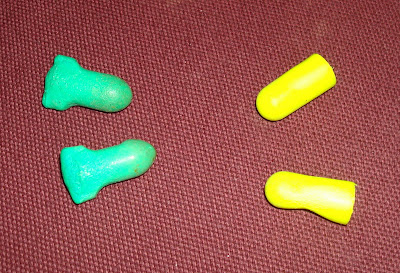 Of course, foam plugs are supposed to be disposable for sanitary reasons.  For any number of other reasons however, they tend to get used multiple times and it wouldn't be surprising after day one if whole colonies of hostile microscopic life had set up home both on them and in them.  I'm sure I've seen some of my plugs move under their own steam on the garage bench ;-).
The quest for reusable ear protection lead to plugs which are extensively used in the music industry, or so the marketing blurb assured discerning buyers.  Unlike foam plugs, they are supposed to allow the full spectrum of frequencies to pass through, just at lower volumes.  Resembling mutant rubber mushrooms, they're inserted into the ear canal with a short hollow plastic rod.  In the end of each mushroom, there is a removable plastic insert with a small hole. Three sets of these come with the kit, each set having a different diameter hole to allow differing volumes of sound through.  Here they are: 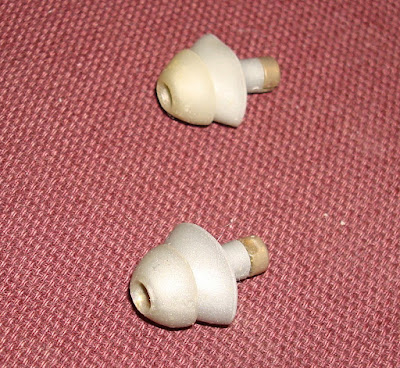 Wasn't all that impressed with them actually and there are probably an awful lot of deaf musicians about if my experience is anything to go by.  The biggest problem was that it wouldn't take long for them to work loose.  My right inner ear must go through a series of U-bends or something because it's a complete bastard (a technical term) to get a plug of any description to stay in.  Foam plugs had to be compressed to a few microns thick and rammed in at the speed of light to have a chance.  The musician's plug had often popped out by the time I'd buckled the helmet up.
Now, in NZ and elsewhere, there are companies that make custom-moulded ear plugs.  They even make ones with MP3 player speakers in them.  Trouble is, being a country hick, it's a long way to reach anyone who provides this service; so a purchase has been on the back burner for a while.  However, when we were on the recent Raglan ride-out, my mate Richard mentioned that the Hamilton Triumph dealer stocked D-I-Y kits for custom-moulded earplugs for NZ$50.  The typical male love of cool stuff prompted a call to the dealer on the Monday morning and the kit arrived in the post next day!

The kit consists of detailed, clear instructions, 2 pots of  silicone, (one with a hardener) plus a carry-bag for the finished articles.  There is sufficient silicone for 3 plugs.  Following the instructions and pictures, I kneaded enough for one plug which took less than a minute, rolled it into a ball and with some trepidations, proceeded to gently work it into my ear canal and also shape a little flap to locate under one of the external ear folds to hold it in place.  The instructions say to leave it for a minimum of 15 minutes to set and I left it for 30.  Didn't have to extract it with pliers or a drill thank goodness, so the process was repeated for the other ear.

The photo below shows the kit and the two finished plugs.  Now I know that from the picture, the plugs resemble something blown into a  handkerchief but the weird shape is the profile of part of the external ear surface and ear canal!  They are perfectly smooth on the outside and look fine. Washable and hypo-allergenic too.

A loud hi-fi test with both plugs inside the house (accompanied by much eye-rolling and sighing by my Chief Executive) revealed a greater noise attenuation than with either the foam or musicians plugs, but how would they be on the bike?  Well, I went for a local open road run to test them out.  Had a bit of difficulty getting them in place first time but it was just a matter of technique and didn't have any subsequent problems.  In terms of noise reduction, they work superbly but interestingly, you appear to be able to hear across the full range of frequencies, just at a significantly reduced level which is great.  One exception is that wind roar seems to have disappeared completely, I don't know why.

For the 80 km round trip, they were perfectly comfortable on the inside of the ear but there were a couple of slightly raised bits on the outside of the plugs that the helmet seemed to press on.  This caused a localised pressure point just above the ear lobe.  It was easy to see where a spot on each plug sat slightly proud and was quickly fixed with the aid of a craft knife .  So all in all:  yep, they work well and they'll be progressively tested for comfort over longer distances.  The manufacturers are a Scottish company and this is the link to their website: DIY Ear Plugs.
No more riding or blogging for a couple of weeks as I'm surprising Jennie with a trip to a secret destination to celebrate our 38th wedding anniversary - leaving early next week.  As far as I know, there's no motorcycle or scooter hire there, but it should still be fun!
Posted by Geoff James at 11:21