1997 - 7 friends about to enter a world of pain
Many Kiwi riders know all about the the reputation, pain and anxiety that is the annual Rusty Nuts Grand Challenge, but comparatively few are inclined to take part.  Internationally; it probably isn't that well-known other than to a few other long haul specialists dotted around the Globe.

It's held annually in October when NZ weather can be quite variable. (In fact, the 1996 event was a nightmare of almost continuous rain and gales, with quite a few other GC's having being run in less than pleasant weather too).

It starts and finishes at Turangi in the central north island but the actual route through manned checkpoints changes each year and is only disclosed the evening before the event to keep it a surprise.  The organisers are sadists and much of the route (especially in the middle of the night) is on unlit, poorly-marked twisty back-roads miles from anywhere.  In NZ, there are no motorways or freeways as such apart from through a couple of major cities so nearly all the event is on 2 lane sealed roads, mainly twisty and of variable quality.  That's one heck of an obstacle, particularly with respect to both fatigue levels and keeping to the schedule.

The event starts mid-afternoon on a Saturday which only gives around 4 hours of daylight riding, then  11 hours or thereabouts of darkness before finishing in daylight sometime the following day. A hundred or so riders start the event, being sent off in bunches a few minutes apart to spread them out on the road.

As the organisers quite properly state, it's not a race and there are no prizes for finishing first.  In fact, all you get is a badge a certificate and a large feed on completion. All that's irrelevant as the reward (perhaps not the best choice of word!) is simply taking part and if you're fortunate; finishing safely within 24 hours. The real battle is with what's inside your own head as completing the ride has more to do with your mental and physical fortitude than the bike you're riding.  In fact, some entrants ride scooters, 50cc motorcycles and so on, just to make things really difficult, bless 'em!


Why would you do it to yourself?
Hmmmm...  good question and there's probably no single answer.  Maybe the closest to a common response is the reasons we all ride - the thrill, enjoyment and challenge in extending ourselves. Doing it tough in comparison with our normally comfortable and relatively soft lives, perhaps.  You certainly find out quite a bit about yourself, that's for sure!  In my case, I saw a magazine article at the end of 1995 where a journalist entered and ended up hallucinating with pain. If memory still functions, he missed the time limit by just over an hour.  Some friends and I talked it over and decided to enter for the 1996 event as it sounded like something which would stretch us (a magnificent understatement, uttered by idiots).  As already mentioned, the weather was appalling for most of the ride, we were in a bit of a state (another understatement) at the end but the sense of accomplishment on finishing with 45 minutes left on the clock was indescribable.

The aftermath of that first event was memorable too, for all the wrong reasons:  Almost unable to hold utensils when eating a meal after I got home.  Laying in the bath nodding off, with Jennie sitting on the side to make sure I didn't slide beneath the waves (the outcome might be different now with decent retirement funds and insurance so I'll stick to a hot shower in case she's tempted to hold me under). Going to bed early and waking up in the small hours with severe cramp, screaming my head off and colliding with bedroom furniture in the pitch blackness in a futile attempt to straighten a leg.  Going to the bathroom in the early hours and shaking with fatigue so badly that the aim was..... well.....ummmm... you get the picture.

I guess that the atrocious weather in combination with not knowing what to expect magnified the memories of that first event.  Subsequent Grand Challenges have all still been a real test but I don't remember being in quite such bad shape at the end of them.


Grand Challenge '99. 2am and looking a lot better than we feel 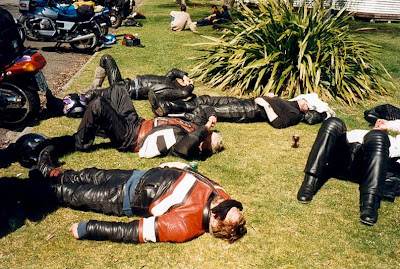 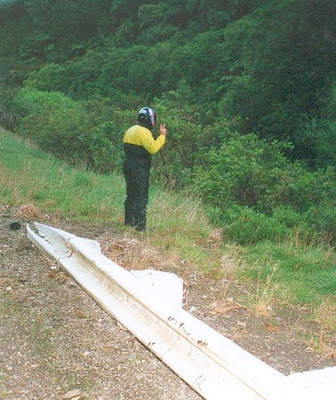 1997 - Bladder control problems and there's always a mate with a camera... 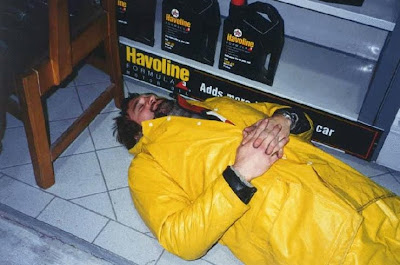 1996 - Steve, feigning death at a gas station to avoid any more riding
Three more Grand Challenges have been completed since the first in '96, the last one being in 2003 and I thought it would be the last.  However, since then, I've blinked and moved well past 60, changed from the faired Blackbird to a naked Street Triple and stupidly got to wondering whether it was still possible to successfully complete another one.  A half-hearted email was sent out to my riding partners, half hoping that the answer was to get stuffed.  However, a close friend who has done the previous GC's with me was keen to have another go, together with 2 other good mates who haven't previously done it (suckers) plus a relative of one of the other lads.  So here we are, entries having been accepted and due to start at 3.03pm on Saturday October 16th; 2 days before my 63rd birthday!  An eclectic range of bikes amongst us - Triumph Street Triple, Kawasaki 500, Kawasaki ZX10R (fool!), BMW K1200S and a BMW R1200 GS.

Fellow NZ blogger Bandit Rider (Andrew) will also be doing the event for the umpteenth time so it will be great to meet him in person at long last. Hopefully, he'll blog his involvement too.

Because of increasing age and being currently less fit than for previous GC's, I thought I'd try and be a bit more systematic in the preparations this time rather than being too casual about it. Reporting the preparations (or lack thereof), thoughts, apprehension, blind panic and everything in between might provide some light amusement at my expense; so more reports to follow at odd intervals over the coming  weeks......


2003 - Apprehension and not long from getting underway
Posted by Geoff James at 13:44