There are 5 of us, possibly 6, riding as a group at the Grand Challenge endurance ride in October (see Part 1 and Part 2 ).  Only 2 of us have done the event previously although most have ridden together on day rides and weekends away.  We know and implicitly trust each other's riding styles but as the event approaches, we need to get out for some decent night runs to get used the blackness of the countryside again; not to mention build awareness of nocturnal creatures of all shapes and sizes just waiting to blunder into the path of unfortunate motorcyclists!

For now, however, getting some mid-winter daylight rides under our belts in a wide range of conditions  and getting used to heavy winter riding gear is all part of the toughening-up process.  Actually getting together for ride-outs is a major mission in itself as we live up to 200 km away from each other.  Add the fact that family commitments, weekend duty at work and other competing tasks get in the way; it's a bit like herding cats - nearly impossible!  Three of us, Andy from Auckland, Richard from near Hamilton and me from Coromandel  managed to get together for a back road run last weekend to the small coastal settlement of Raglan. The round trip was a modest 420 km, but that will be ramped up over the coming weeks.  The twisty, unfamiliar backroads were also a good test of my GPS, which rarely gets used on the bike.

Coromandel to Raglan - a 420 km round trip
With the temperature below freezing, I leave Coromandel with multiple layers of clothing on.  Take it really easy in the Coromandel high country as the fields are white and there is a band of frost down the centre of the road.  Going down on my arse a few km from home won't get a sympathetic response from my mates! The trip across the Waikato province to the rendezvous point at Woodleigh on SH22 north of Raglan is uneventful and although the frost has largely disappeared, extreme care is required on shaded bends.  It's a beautiful ride and the road running due west from SH1 at Huntly to SH 22 at Woodleigh,  follows a ridge which gives incredible views of the countryside both north and south. Gorgeous farming country at its very best. 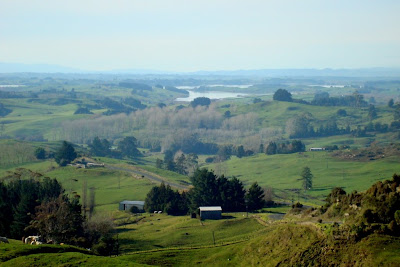 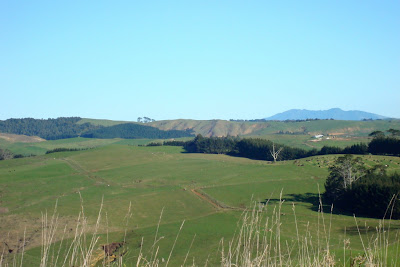 View looking south
Arriving at the rendezvous point, it is less than a minute before Andy and Richard show up. Andy from the "sophisticated" metropolis of Auckland thinks that Richard and I are inter-bred country boys and the moment he spots the 3-fingered Rain-Off mittens I'm wearing over my winter gloves for added insulation, he reckons they're the perfect accessory for both of us.  We might both live in the rural backblocks, but it's hardly "Deliverance" country and as neither of us can play the banjo, he's got a bloody cheek!  He'll keep.... 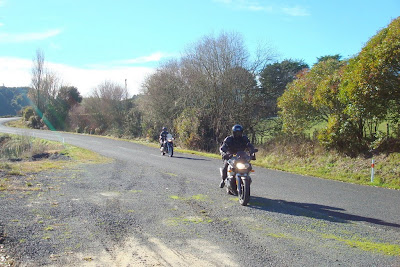 Andy and Richard rocking up 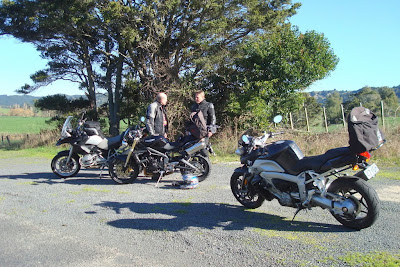 Richard and Andy having words about 3-fingered gloves
After a quick chat, Richard on his GS 1200 leads off as he knows the Waikato back roads fairly well.  SH22 is a biker's paradise with no straights at all longer than a few tens of metres although how it gets a "State Highway" designation given its narrow width and remote location is beyond me... maybe because it's actually tar sealed, unlike a lot of the other nearby roads.  Richard sets an excellent fast pace although showing a lot of wisdom in riding conservatively in the shaded parts of the road as frost is still evident, even though it's just after 11am.
The main street in the coastal village of Raglan is packed due to school holidays and it being a weekend so we ride straight through and out to the wharf where the Marlin cafe is situated right on the harbour.  There are other riders there already enjoying the winter sun and it's surprisingly warm.  Everyone is chilled out and bikers and non-bikers alike enjoy each others' company. 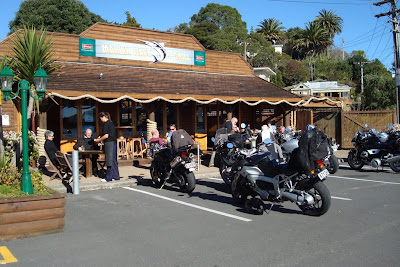 The Marlin Cafe and Grill, Raglan 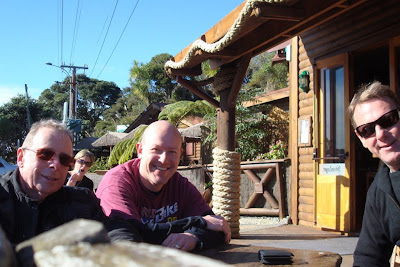 Geoff, Richard and Andy eagerly awaiting sustenance
Lunch consists of seafood chowder, John Dory and chips with salad, washed down with great coffee and spiced tomato juice in Andy's case as he's a sophisticated Aucklander ;-).  Unlike our esteemed Canadian bloggers, I don't take photos of the meal but it tastes great! The conversation briefly turns to the big ride in October and how to protect our butts from terminal damage due to hard bike seats over the 1000 miles.  Andy reckons an inflatable haemorrhoid ring might be the way to go.  The conversation then takes a downward spiral with Richard suggesting that a kid's  rubber swimming ring complete with a blow-up duck on the front of it would really fill the bill.  Oh dear...... 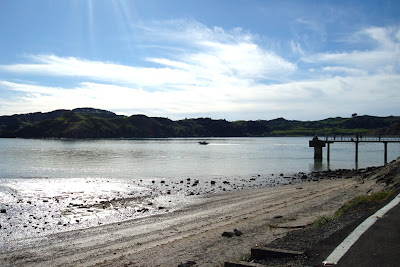 Raglan harbour and big sky across from the Marlin cafe
After a most enjoyable lunch, it's time to head to our respective homes, with Richard heading just south of Hamilton and Andy and me re-tracing our steps back up SH22.  The road is now frost-free and dry and it's a rapid trip north with Andy setting a cracking pace on his K1200.  The fantastic wail from his 4 into 1 aftermarket can is an added bonus!
Saying goodbye at our morning rendezvous point, I head back to Coromandel across country where there is virtually no traffic - absolute biker heaven.  Riding up the Thames-Coromandel coast, the radar detector pays for itself yet again!  A member of the Highway Patrol is cunningly hidden by some trees to collect revenue from inattentive motorists.  Although I'm not "a lot" above the legal limit, the detector picks up the microwave emissions several hundred metres from his position so the wallet-opening ritual is easily avoided.
Coming into Coromandel,  a thin veil of cloud is moving over the sun, casting a beautiful light over the harbour so I stop to take a couple of shots. 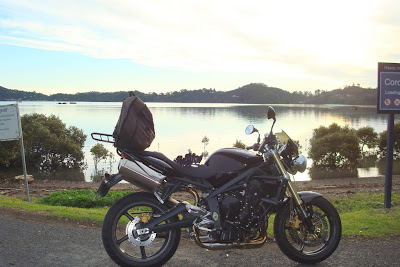 Coromandel Harbour and one minute away from home 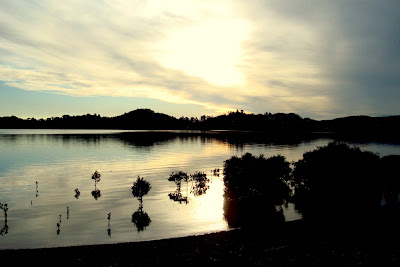 Coromandel Harbour as the winter sun sinks
All in all, a wonderful winter ride with treasured friends - no room for the winter blues on a day like this.  In fact, such a day genuinely rejuvenates the soul!
Posted by Geoff James at 16:29