I took the following photos at a classic bike ride-in a few years back.  The emphasis was on a ride-in rather than drive 'em in on a trailer and ride them the last few hundred metres; some of them coming over over pretty long distances.  All were beautifully restored but they certainly weren't show ponies and on the open road section of the ride-in, some were being pushed along at a fair old pace!  These photos are just a small selection but it's wonderful that so many older bikes not only exist, but are used quite regularly: 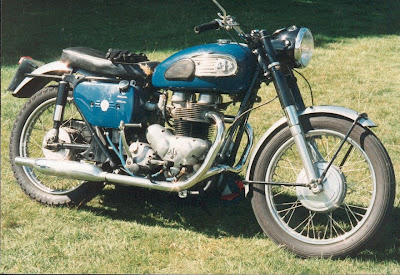 The following two pictures are of me, my BMW K100RS and some friends whilst at the classic bike weekend.  The Beemer is hardly a classic but the scenery in Taranaki province is really nice!   The first photo has Mt Taranaki, a 2500 metre high dormant volcano as a backdrop.  The second photo is with the same friends, parked up on an old timber stagecoach road bridge a few km from the classic meeting.  It was noteworthy in that it had been closed to traffic for some years due to rotten timbers but we managed to squeeze the bikes through the bollards and carefully ride them onto the bridge! 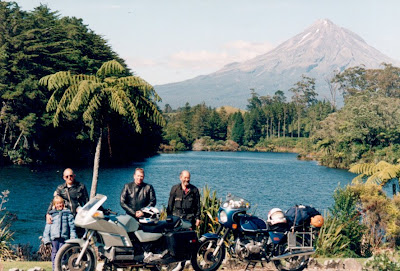 If there was one great thing about 1960's British bikes and earlier, it was that the seat heights were perfect for vertically-challenged people - nothing over 800mm.  At 5'8", many modern bikes rule themselves out of my consideration on seat height alone!
Posted by Geoff James at 14:44