A bit of exploring

Another fantastic day ride, 470 km
The forecast for last Sunday was overcast and windy, but dry.  A great day for a ride with the lads to get in yet more practice on back roads for the big event due in 6 weeks' time.  On this occasion, the ride destination is into largely unknown territory - the Awhitu Peninsula, south-west of Auckland. The Peninsula is sparsely inhabited and has a network of narrow, twisty roads.  The only person to have been there before in relatively recent times is Andy, and it's rumoured (well, a bit more than rumoured, *snigger*) that he ran out of gas miles from anywhere on that occasion!
Setting off after an early breakfast, it's a solo run through country lanes south-west to Huntly to meet up with the lads who are riding up from the Waikato province, plus Andy; who is riding  down from Auckland.  Huntly is situated on a massive coalfield and has the only coal-fired power station in NZ.  It's the perfect rendezvous point on account of all the fantastic back roads in the area. 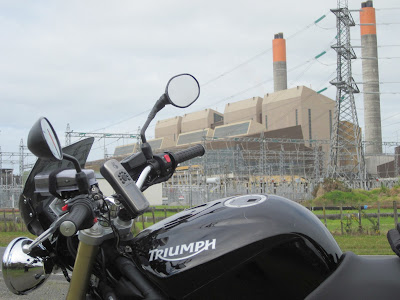 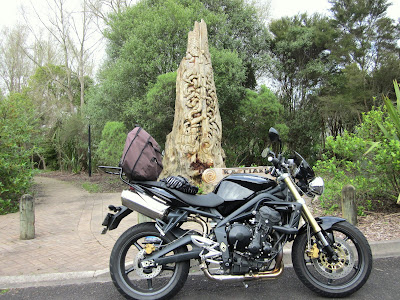 Kaitiaki - Maori wood carving, spirit guardian of the nearby Waikato river
Arrival is about 15 minutes ahead of schedule on account of non-existent traffic but being super-keen, Andy has already arrived.  Not long afterwards, the Waikato contingent show up, also ahead of schedule in eager anticipation of a great day out.  John P turns up on a Kawasaki ZX9 R which he bought from a mate for a very sharp price because of cosmetic damage and has made a beautiful job of restoring it.  John H has brought a mate, Dave, on the latest Hayabusa - fantastic paint job on it.  Looks like it's not going to be a slow ride then, just like old times but hope I can keep up! 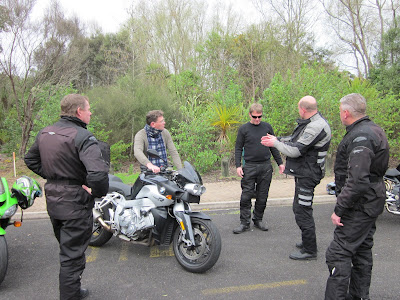 Andy: "Sorry Richard, my cojones are nowhere near that big!" 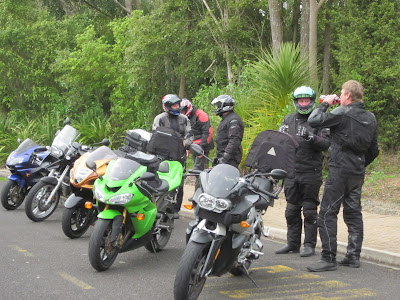 Getting ready for the off....
I'm the only one who has previously travelled on the westbound Hetherington Road, so get to lead out.  It's fairly narrow but the twists and turns and altitude changes make for a wonderfully technical ride on a bike.  Andy thinks it's his new favourite road and is having a ball but John P is having a tough time wrestling the ZX 9.  The bike doesn't want to turn into some of the tighter corners and it's really hard work for him.  The rear tyre is a Michelin Pilot 2CT in good condition but the front is an older Pilot Power with an odd wear profile.  It's clear that the suspension and steering set-up will need to be checked, plus a likely replacement with a new matching front hoop.  Good job that John is a very experienced rider and knows bikes and cars backwards.  Interesting how faults manifest themselves at a slightly elevated pace and something to address before the Grand Challenge.
At the end of Hetherington Road, John H takes the lead for the blast up route 22 as he's familiar with it and I take up the Tail End Charlie role.  A nice, fast smooth lead by John.  It's wonderful watching the bikes in front taking identical lines through all the bends and even with ear plugs, listening to the wail of aftermarket pipes is magic!  Reaching Tuakau, John pulls into a rest area for a short break and to allow Andy to take over the lead for the run over to Waiuku, a small provincial town which is effectively the gateway to the Awhitu Peninsula. 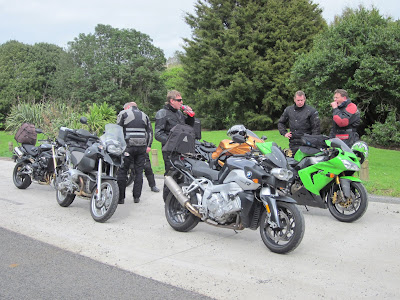 A quick break at Tuakau

The trip over to Waiuku is in a semi-built up area but it's not a big distance and everyone settles into cruise mode.  Most people need to refuel so it's into a gas station and to maximise riding time, that staple Kiwi and Aussie biker food is consumed on the forecourt - the ubiquitous gas station meat pie. (Gastric repercussions at no extra cost).
Andy sets a cracking pace up the Peninsula - not much likelihood of the Highway Patrol out this way.  In some places, the road runs along the top of a ridge and the views are spectacular, not that there's much time for sight-seeing.  However, near the northern end, the roads get a bit confusing (not blaming Andy of course) with lots of poorly-marked side turnings and after a few aimless circles, the decision is taken to take one marked "Manukau Heads".  After a while, the sealed road gives way to a steep gravel track leading down to the lighthouse at the Heads.  It's only a couple of km long with plenty of visibility, so no dramas in riding down there.  It's a fairly steep walk up to the lighthouse itself but the views are supposed to be spectacular.  Crikey, it's a trudge up there all right and warm motorcycle clothing causes a fair bit of perspiring and lots of heavy breathing! 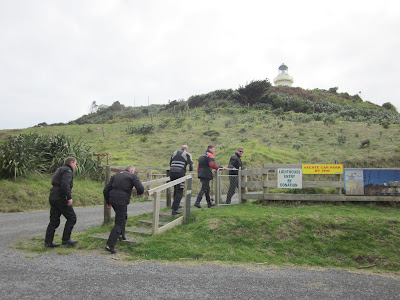 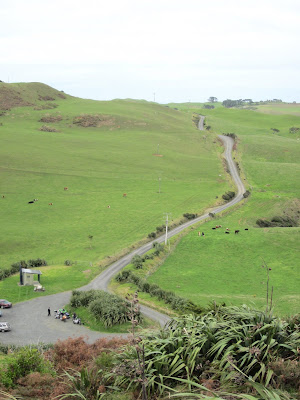 View of gravel track from lighthouse
The walk up the track is very much worthwhile with spectacular 360 degree views.  To the west, the Manukau Harbour Heads and Australia some 2200 km further on.  To the north east, Auckland City and the Skytower can just be seen on the skyline, around 30 km away as the crow flies. 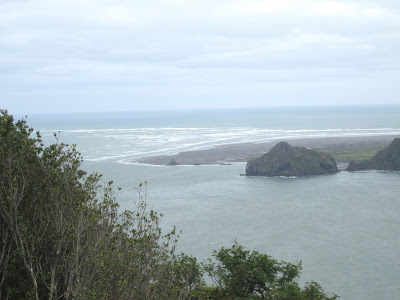 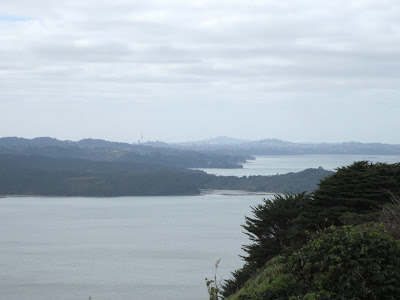 Inner harbour and Auckland City
The lighthouse was built in 1874 and is in beautifully restored condition.  There's no guide hovering to tell you what you can and can't do, but lots of historical info and photos, a notice saying what the opening hours are, and a polite request to close the balcony door when you leave!  An unattended donation box sits by the door and is gladly contributed to for both the great restoration and lack of bureaucracy. 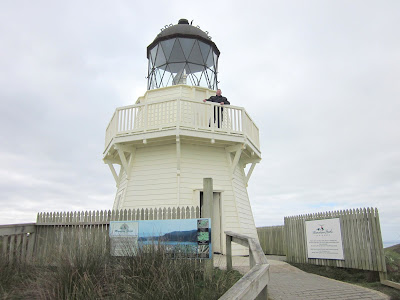 The lighthouse in all its glory, only spoiled by yours truly 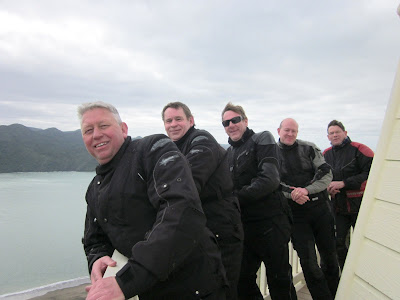 A very windswept Dave, John H, Andy, Richard and John P
Back down to the bikes where Andy has to take his leave and head back to Auckland to take family and friends to a women's netball international between NZ and Australia.  Some ribald comments are made as to whether Andy's interest is purely sporting or whether 6 foot tall athletic, attractive girls in short skirts provide a more likely motive for cutting a ride short.
I lead back to Waiuku and only encounter a handful of cars, so the pace is brisk again.  Only one slight embarrassment - having to pull in for a moment when realising that my helmet strap wasn't secured - doh!  The bends have clearly caught out a young woman driving a lowered Japanese car as she's gone off the road onto soft grass and is in the process of getting it bogged in her attempts to return to the road.  Plenty of people standing there though, so we carry on to where I fill up ready for the haul back home.  The guys follow me back through Pukekohe and out onto the Southern Motorway for a few km until I turn off to Coromandel and we then head for our respective homes.  Must head back sometime to the Awhitu Peninsula for more leisurely exploring of the regional park and beaches - it's gorgeous up there and the roads are superb for bikes or cars that actually handle.
Left home at bang on 0800, got back a touch before 1600 and covered 480 most enjoyable twisty kilometres in great company.  Every rider will recognise the satisfaction which comes from a ride like that.  Thanks again for the great companionship guys and see you soon for a decent ride in the dark as final practice for the Grand Challenge!
Posted by Geoff James at 09:39