Classic racebikes and other stuff

Decided to slip in a quick post before Xmas whilst I was sorting through some photos!

For a country with a 4 million-odd population, it's surprising just how many gems from the automotive and aircraft world lurk in people's sheds in NZ.  As an example from the aircraft world, there's an elderly guy at the top of the south island who bought some surplus aircraft in the decade following WW2 and stored them in a huge barn on his property.  All he does is go and sit in them and one is a De Havilland Mosquito.  How much would that be worth to a restorer????? Virtually priceless I guess.  Amazingly, there are four Mosquitoes reputed to be under restoration in NZ, one at an advanced stage.

Anyway, onto things automotive and motorcycling in particular; there are a huge number of classic race bikes which come out to play now and again, many very rare or one-offs.  In the latter category is the original Burt Munro Indian (World's Fastest Indian) and some of his other bikes.  They are permanently displayed at a hardware store in the south island town of Invercargill where Burt lived. Here's the link to photos of the real bikes: E Hays Hammer Hardware .  They even sell Burt Munro memorabilia.

Some of Burt Munro's bikes

The February 4-6 International classic meeting at the Pukekohe track in south Auckland is not to be missed because classic racers come from all over the world to take part.  I'll be there snapping away in 2011 but in the meantime,  here's a few interesting local ones I photographed at various domestic meets over the last few years.  The fact that they're still in existence at all is wonderful, but that they are wheeled out time after time and given a real caning on the track is both testament to the bikes themselves and the care and time which the owners lavish on them. 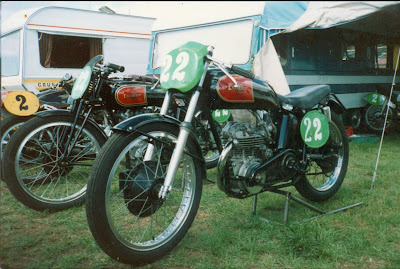 A brace of Excelsior Manxmen
Built in the 1930's in England in 250cc, 350cc and 500cc sizes, they were overhead cam driven and really innovative considering that Japanese bikes tend to be popularly thought of as introducing OHC to production bikes in the 60's.  The Excelsior closest to the camera has had the girder forks replaced with telescopic units.  Great to see 75 year old bikes still being raced and raced hard at that! 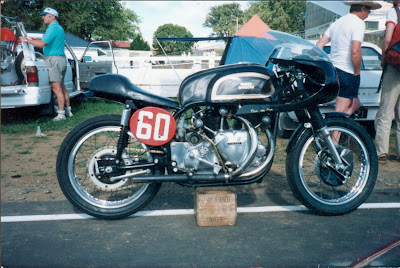 A Norvin
The Norvin is a British Vincent 1000cc engine shoe-horned into the legendary Norton featherbed frame.  Considering that the first Vincent V twin appeared in the mid-30's, they have remained remarkably plentiful and there are plenty of specialist companies around the world dedicated to keeping the name alive.  Wicked-looking bike and they sound magnificent with straight-through pipes - nothing politically correct about a racing Vincent engine!  As an observation, the twin leading shoe front brake would have its work cut out hauling up a Norvin from speed. 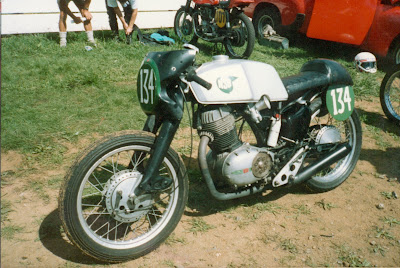 NSU Sportmax
The German NSU 250cc Sportmax racing single from the mid-1950's was a pretty uncomplicated racebike with pressed steel leading link forks. However, it's yet another example of a pre-Japanese overhead cam motorcycle.


The final photo isn't a racebike (you don't say!) but I photographed it at a classic meeting.  It's a Triumph from the early(ish) 1900's which has been impeccably restored.  It wasn't the bike which took my breath away but the beautifully made sidecar in green buttoned leather and woven cane.  Most regular readers of this blog will have gathered that I love the work of what might be described as "traditional" craftsmen.  This sidecar most definitely falls into that category - what a magnificent piece of work. Hope that the Health and Safety morons haven't seen fit to interfere with its ability to traverse NZ's highways. 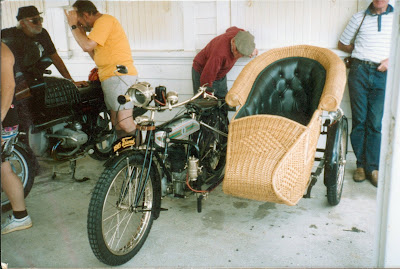 
Finally, nothing at all to do with classic racebikes.  I'd like to mention a book which I read over the last week which may well appeal to motorcyclists everywhere, given their love of interesting challenges and a healthy disdain for conformity and boring normality.  This book was so funny that frequent hysterical snorting and choking, followed by wiping of eyes and blowing of nose was earning me sighs, tuts and rolling of eyes from my nearest and dearest whilst in earshot.

The book has an unlikely but true storyline. It's about a battery-powered domestic milk delivery float, built in the 1950's with a top speed on level ground of perhaps 20 mph or a tad more with a storm-force tailwind. Three guys decided not that long ago to drive one from the most easterly location in England to the most westerly part.  Not for a charity or any purpose other than it being good fun.  Adding spice to the tale, they did it with little or no forward planning - an interesting proposition considering that the batteries require re-charging every few hours.

If you enjoy a tale of quirky human endeavour coupled with the very best English wit, then you could do a lot worse than reading this.  You'll laugh yourself sick.  Here it is:  Three men in a Float, by Dan Kieran and Ian Vince - ISBN978-1-84854-015-6.  I was lucky enough to find it in our local library, but I know it's available at a modest price from at least a couple of international web-based booksellers.  The human race would be all the poorer without people having crazy ideas like this.
Posted by Geoff James at 17:10