A mid-winter ride on 7 cylinders

The weather in much of NZ has been appalling for the last 2 weeks - gales and lots of the wet stuff dropping on us!  The most common disease among riders has been the dreaded cabin fever, not to mention huge task lists given to us by our significant others seeing as we've been stuck indoors.  However, the forecast for today was no rain and no wind, so it was time to get out for a ride with fellow Institute of Advanced Motorists trainee Bob Benton from Thames and fellow blogger Roger Fleming from Auckland who is also joining the IAM. None of us had ridden together before so it was going to be especially enjoyable.

I was due to meet with Bob in Thames and then meet Roger on the western side of the Firth of Thames at the Kaiaua fish and chip shop, a well known biker eatery.  Roger had asked me to pick up some smoked fish in Coromandel as their products are simply outstanding, so first stop was to buy some smoked kawahai with a herb coating and trevally, smoked with lime and pepper - yummm! 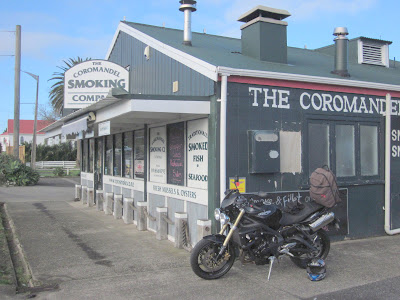 The ride down the twisty coast road to Thames required a bit of care, partly because the weeks of no riding had made me a bit rusty and secondly because some shaded corners were a bit greasy due to the incessant rain.  The temperature was in the low single figures when riding down the coast but pleased to report that the newly-fitted Acerbis handlebar guards really did the business.   The low temperatures also caused another phenomenon where the cold air met with the warmer waters of the Firth of Thames - fog!  It was really weird as the fog only started about 400 metres from the shoreline and the ride to Thames was in clear blue skies!
After meeting Bob on his DR650 trail bike, the fog rolled onto the land just south of Thames, limiting safe speed to the legal maximum of 100 km/hr!  Condensation on the visor wasn't much of an issue as a pre-ride application of Rain-X caused it to bead off as soon as it settled.  Although Roger set off from Auckland in beautiful conditions, he would encounter similar conditions as soon he hit the coast from the north.
Kaiaua was reached without incident and a great feed of fish and chips in traditional newspaper was consumed at the tables on the edge of the car park.  The water's edge is basically just across the road but the fog was so thick that we couldn't see the water at all! 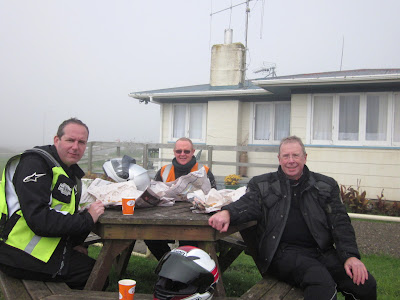 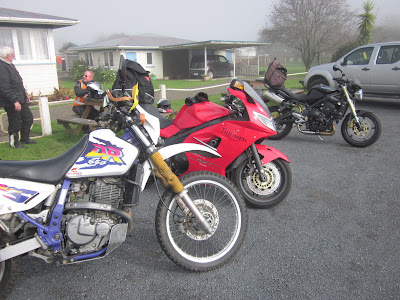 Bob's DR650, Roger's Sprint and my Striple
As is the way with riders everywhere, good conversations are easily struck up and we were joined by an Aucklander called John.  He's the silver-haired chap on the left of the picture above.  John epitomises getting the most out of life.  70 years old with an almost new Triumph Tiger to add to his stable of several bikes.  He's also off to Patagonia in November, riding a rented BMW 800 trail bike through the country.  What an inspiration and we concluded (probably wrongly, but certainly enviously!) that he was single to be allowed all those indulgences, hehe!

After finishing lunch, Bob and I decided to accompany Roger part way back to Auckland via the gloriously twisty road that runs along the edge of the Hunua range of hills.  The hope was that once we got away from the water, the fog would lift.  Twisty, narrow back roads with fog is not a good combination as we'd already noticed on our way to Kaiaua that about 75%  of the car drivers encountered were driving without  lights - morons..... 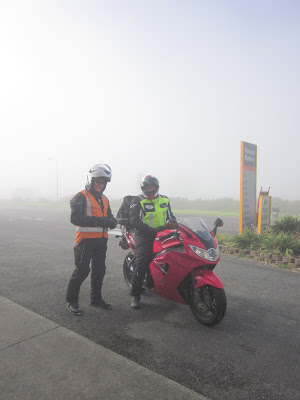 Leaving foggy Kaiaua - picturesque, but not all that pleasant for riding

I took the lead and sure enough, blue skies and sun were the order of the day after a couple of kilometres or so.  With us all having read all the IAM classic advanced riding handbooks, we were all conscious of not wanting to stuff up in front of the others and have to endure the mickey-taking which would inevitably follow.  Perhaps there was just a hint of wanting one of the others to stuff up so that some good-natured leg-pulling could follow!  Karma always has a way of intervening in these situations and it was yours truly who made the stuff-up.  Coming up to a countryside intersection with a STOP sign,  I came to a momentary balanced halt but for some inexplicable reason, didn't put my foot down - oh noooo!  Pulling away, I felt 2 pairs of eyes boring into me and imagined the sniggering inside their helmets - a Gotcha moment if ever there was one.  At the turn-round point a few minutes later, I got in first and confessed.  The smug retort was "We know".  Sod it!

After saying goodbye to Roger, Bob and I had a largely fog-free run back to Thames for a cuppa at his place and then I headed back home to Coromandel.  This was the worst part of the trip with the low sun reflecting off the water and causing massive sun-strike for the remaining 50 km.  Really hard going, with a lot of concentration required.  So there we are..... a 260 km mid-winter ride which despite the fog, was just the thing to combat cabin fever and doing it with such good company and competent riders was an additional bonus.

Finally, and nothing to do with bikes, let me introduce the latest member of the James family, albeit of a likely temporary nature.  This is "Little One".  The females reading this may now say "Awww...." 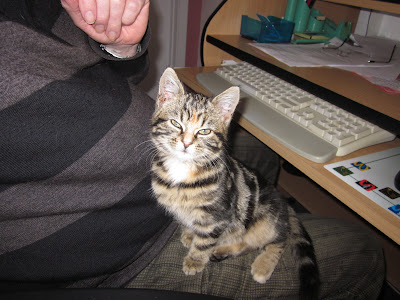 Little One turned up at our place just before dinner on Friday night.  Poor little chap was clearly starving by the way he devoured a bowl of cat food.  He can't be more than about 8 weeks old and has a gorgeous nature.  Our two cats weren't enamoured to see him but allowed him indoors where he recognised a couple of soft touches in Jennie and me and promptly made himself at home.  We put him out last thing at night on our covered deck in the hope he'd find his way home -  no such luck.  In the morning with little nose pressed against the window, there he was.  We've had no success whatsoever in tracking down his real owners (sorry....servants) so we're in a bit of a quandary.  Do we turn him over to the local SPCA/cat rescue before he totally captures our hearts or what???  Yet to be resolved....