Just a few days into spring, a gorgeous warm day, perfect for getting the Street Triple out - so did it happen?  Nah, had promised Jennie that we'd go fishing so wasn't that disappointed!

The day didn't start out on a promising note though.  Woke up with a prickling forearm and saw a purple area about 5mm diameter under the flesh.  On closer inspection, there was stuff oozing through 2 tiny little holes.  Bugger, almost certainly bitten during the night by one of these suckers: 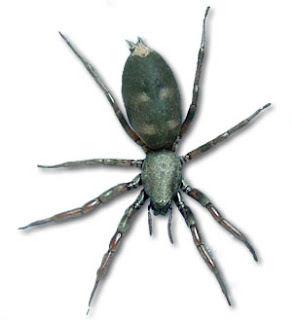 I HATE spiders unless they're practically microscopic.  The White Tail isn't aggressive but will bite if it gets into clothes or in my case, it might have crawled onto the bed *shudder*.  It isn't even a Kiwi spider but an import from our Aussie cousins across the pond.  How is it that 90% of the fauna and marine life in Australia is hell-bent on killing the human inhabitants???  Anyway, it's generally thought the White Tail bite isn't poisonous to humans but the bacteria on its fangs can cause necrosis in a bad bite.  I bit the bullet, gave the wound a good scrub with disinfectant, applied antihistamine cream and it hasn't got any worse - just aches a bit.

There's a boat ramp at the end of our road which is perfect for launching in sheltered conditions although the sea was flat as a mill pond today.  It's a well-oiled machine with me reversing into the water and Jennie unhooking everything. 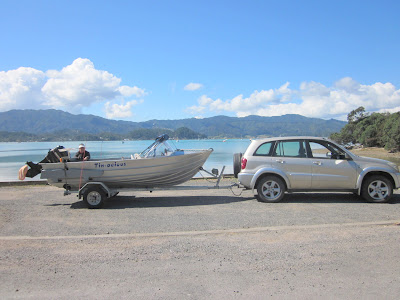 Getting organised by the ramp 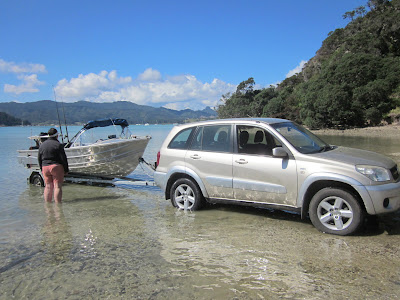 The big fish don't start moving inshore for a week or so yet and we normally only fish a couple of km out from our house among the commercial mussel beds which are convenient to hitch up to without dropping anchor.  Pickings might be a bit lean but most of the pleasure is simply being out there.

Leaving the harbour, we passed our neighbours Brian and Mary in their U.S-designed Bristol Channel Cutter keelboat.  Not enough wind to fill the sails, but perfect for a bit of motoring.  Regular readers may remember this post I made on the stained glass windows Brian made for our house.  Brian is a true Renaissance Man.  Not only did he build the boat, but the woodwork inside is exquisitely carved and he even cast the bronze fittings on the boat! 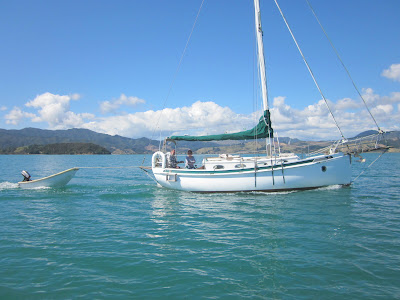 Our neighbours in their keel boat 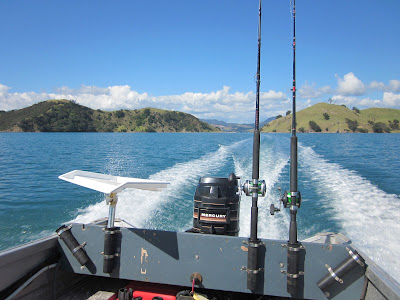 Heading out of Coromandel Harbour to the mussel beds

The first hour out there was dire in terms of catching fish but unbeatable in terms of location.  Warm, no-one else around and magnificent scenery.  The water was so clear and still that you could see down several metres. 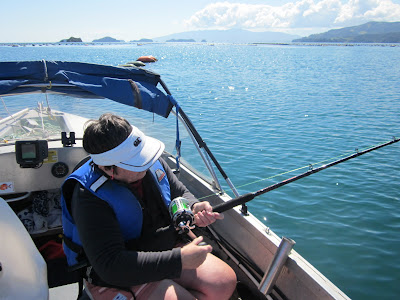 Jennie - a study in concentration (with no success, hehe) 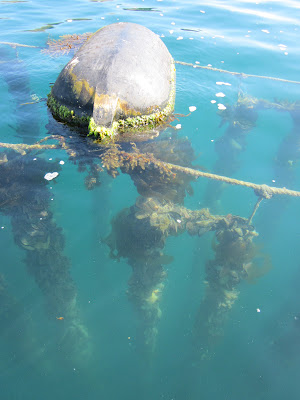 After an hour, we shifted location. The fish finder showed a few swimming about, but they weren't biting.  No big deal, a great time to just chill out....... 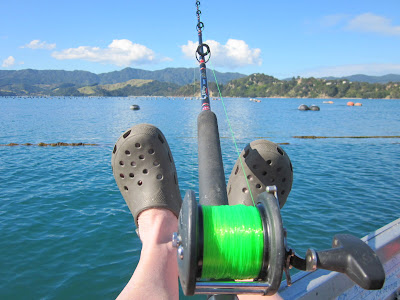 Just 10 minutes from packing up for the day, a modest-sized snapper took pity on me and offered itself as a meal - whoopee!  All in all, one of those truly great days when one is at peace with the world, although we could have done without the spider. 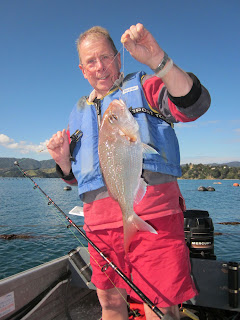 Sincere (almost) apologies to those who had to be at work today.  Your time will come :-)