A nice run on 4 wheels

Dontcha hate it when the weather refuses to play ball?  Normally, the weather is pretty predictable in NZ from Xmas until the end of April with warm, settled weather.  However, this year, the La Nina weather system has been hanging around the north island and has given us the odd few days of unpredicted rain and high winds when we least expect it.

We had to defer a planned fishing trip for a few days finally getting it in mid-week (with Jennie out-fishing me as normal) and yesterday, we finally managed to do a 420 km round trip to the lighthouse at the Manukau Harbour Heads on the Awhitu Peninsula .  I'd been there with my riding partners over a year ago, enjoyed the run and had promised to take Jennie.  Mind you, the day didn't start on a promising note as Jennie's cat Thomas was clearly unwell when I got up to feed him.  Fortunately, the vet in Thames, some 50km down the coast was able to see him so we set off in Jennie's two-seater with Thomas perched on her lap in a cage.  We left him there for diagnosis whilst we carried on to the lighthouse.

Awhitu Peninsula and the lighthouse location

The Awhitu Peninsula is sparsely populated despite being quite close to Auckland.  It's also exposed to strong westerly winds and big seas coming across the Tasman Sea from Australia and many vessels have got into trouble on the bar at the harbour entrance.  The next picture will give you some idea of the average wind speed in this area! 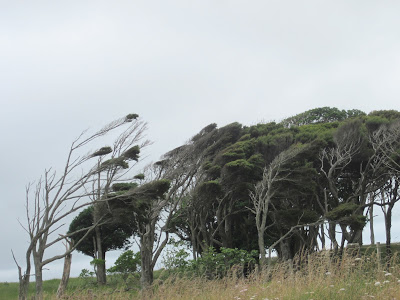 No mistaking the prevailing wind direction!

It wasn't blowing all that hard as we drove up the peninsula although there were some very dark clouds in the direction we were heading, despite an encouraging weather forecast.  The roads are a motorcyclist's dream - continuous twisties all the way although you need to be on maximum alert on the narrow roads for the few sightseers on this route who inevitably have their brains in neutral.  The last km before the lighthouse is hard-packed dirt with gravel on a downhill gradient.  Fine on a road bike if you take your time and no sweat on 4 wheels.

It's a bit of a steep trek from the car park to the lighthouse and we were both fairly warm by the time we reached the top (err......  trying not to say too much to each other to hide the panting!). 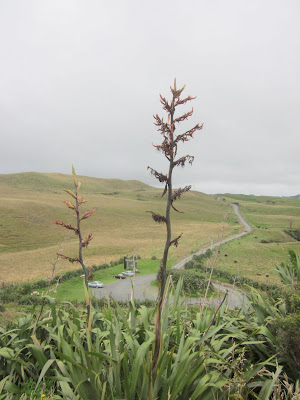 By Awhitu Peninsula standards, it wasn't blowing all that hard and although we only felt a few spots of rain, it was really laying it down on the north side of the harbour, courtesy of a sudden summer squall.  Pretty spectacular as long as you weren't out in it! 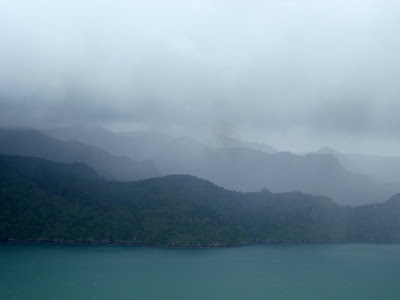 Moody shot of squall passing through 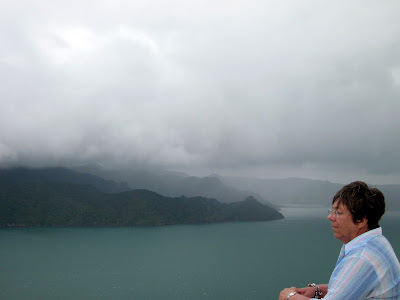 The CEO enjoying the spectacle

The lighthouse itself was restored in quite recent times, having originally been built to guide ships through the treacherous harbour entrance in the mid 1800's.  The lack of bureaucracy is refreshing.  It's open all day with no-one in attendance.  Apart from very informative info on the history of the area, there is one sign politely asking you to close the lighthouse doors on the way out and another asking you put a donation in the coin box for upkeep if you've enjoyed it.  Wonderful in this day and age!  Oh, and not the slightest hint of vandalism anywhere - fantastic. 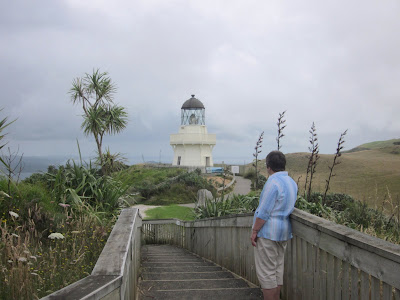 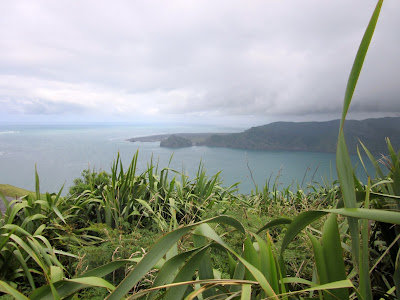 Apart from the odd sheltered area, plants don't grow very tall at the lighthouse but I was rather taken with the shrub in the foreground below which resembled an out-sized hedgehog with all its spines.  Wonder if it would grow in our garden? 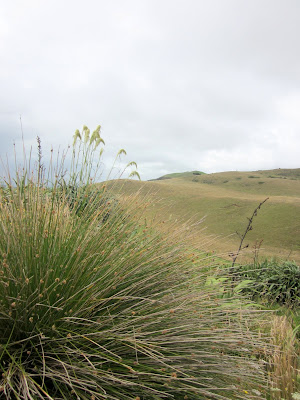 You wouldn't want to fall into this shrub!

On the sheltered eastern side of the Awhitu Peninsula, there are (apparently) lots of pretty beaches.  Unfortunately, road signage isn't all that flash on the maze of tiny roads and even with a GPS, finding one was more by luck than good judgement.  Graham's Beach below was virtually uninhabited and we must go back up that way do do some more exploring when we have a little more time (getting back to the vet's before they closed was in our minds). 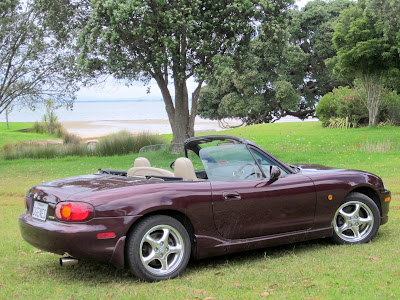 Graham's Beach - where is everyone?

Arriving back at Thames, the vet announced that Thomas had a throat infection which antibiotics would clear up but there were some other treatable issues which older cats can get which would require attention in due course.  (Vet-speak for saying that we'll be taking out a second mortgage in the coming weeks to pay for it!!).  Still, animals are family so all we can do is grit our teeth and pay up.  Nonetheless, a great day out together which we thoroughly enjoyed.  The Street Triple is hopeless for 2-up riding but trips out in Jennie's sports car are great fun too.

Oh, and one other thing.  Not that it's any big deal but this is the last blog post, at least for the foreseeable future.  They say in retirement that you're busier than when you were in paid employment and that's certainly true in our case.  Jennie and I are both voluntary computer tutors for Senior Net, a nationwide organisation to provide computer tuition and support for senior citizens.  I've also recently been appointed national training co-ordinator for both the motorcycle and car divisions of  IAM (Institute of Advanced Motorists).  This will involve designing and running a database to ensure that members receive training in a timely manner.  This will be the main focus for some time, so more than happy to put blogging at the bottom of the pile.

I'd like to wish my fellow moto-bloggers in particular every good wish, safe riding and thanks for such entertaining blogs.  I've really enjoyed them, not only because of our shared love of two wheels, but also for the comradeship and a peek into lives in other parts of the world.  We're not so very different are we, despite politicians trying to raise unecessary artificial barriers between our cultures.  Take care and I'll try to make time to see what you're all up to on the odd occasion!