Ok, let's start with an introduction - the chap in the photo below with the beautiful Daytona 675 is Andy West.  I think you know the disreputable old geezer on the right so the least said about him the better. 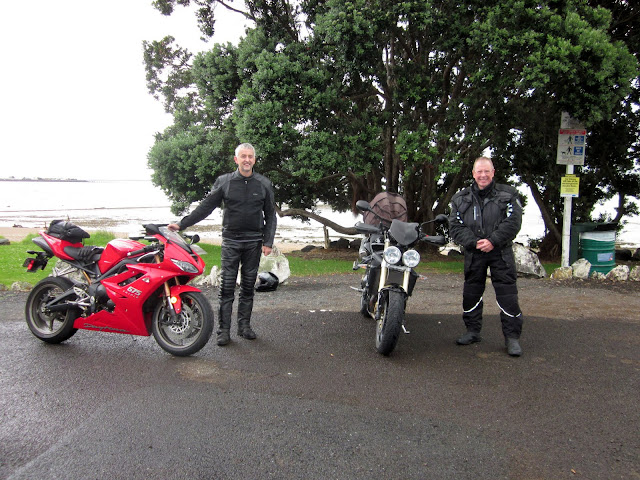 Being oh so terribly formal, Andy is Dr. Andrew West, a prominent figure in the world of science and commerce and Vice-Chancellor of NZ's Lincoln University.  At a far less formal level, he's a life-long bike nut and also has an early Triumph Trident and an immaculate '69 Triumph Bonneville in his man-cave at home.  As I was also due to find out during the day, he's a really down to earth nice guy and a bloody quick and safe rider too.

Going back 6 months or so ago, Andy contacted me through the blog as he'd seen the link to my Street Triple review and asked for my views about its suitability for his wife as a post-learner machine.  As well giving some opinions, I'd offered Andy the chance to ride it for himself and draw his own conclusions.  Today was that day so rode down the coast to Thames to meet him, bring him home for lunch and then settle into the serious fun of trying out each others' bikes!

A few showers had passed through in the morning but the weather was brightening up, the roads were gradually drying and the portents were good for using the bikes how they were meant to be used (in the name of thorough and objective road-testing, you understand). 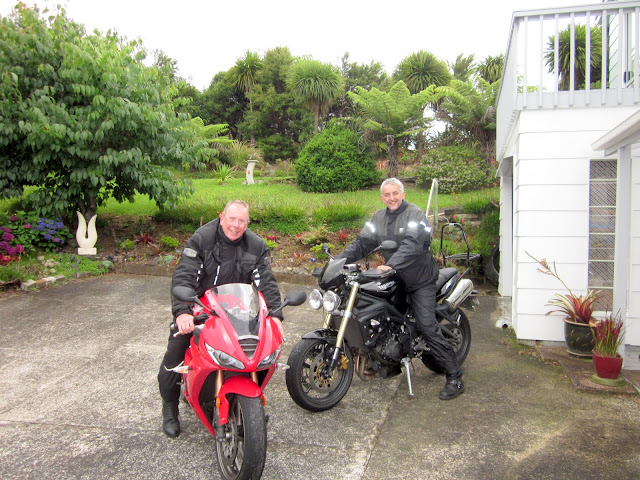 Bike swapping - throw your keys in the middle and see what you get!

A quick walk-around
A preliminary perch on the Daytona showed it to be poles apart from the Street Triple.  It may share the 675 power plant, by that's about as near as it gets!  The Daytona is the closest thing to a pure race bike on the road as you're likely to encounter.  The strongest (and slightly unnerving) impression which hit me when first climbing on board was the near-complete absence of anything in front of you!  I always wanted to ride an Imperial Stormtroopers bike from Star Wars and this is the nearest thing to a terrestrial equivalent!  The low screen and mirrors were way below the eye line and it felt like you were sticking right out in front of the bike.  The clip-on bars also felt like they were vertically below my chin although amazingly, they felt perfectly comfortable.

The seat height is greater than the ST but the narrower seat allowed me to rest on the balls of my feet with complete confidence, also due to the bike's light weight at around 165 kg.  Controls were identical to the ST, so they were instinctive.

Wossit go like, mister?
Andy had warned me that the Daytona has a very tall first gear and he was right! Cutting through dozy holiday traffic in Coromandel village required more concentration regarding road positioning than the ST.  I never actually had to dip the clutch but the fingers were ready if required.  The saving grace was the big torque spread of the motor and I'll come back to this later.

Getting onto the open road was initially unnerving.  The lack of anything in front of the face and the head down, arse up riding position felt quite precarious and coupled with the narrow, low bars, I didn't feel all that confident about hustling through the bends.  Probably no bad thing as the road was still slightly damp in places, the supersports-oriented Supercorsa tyres weren't up to high grip temperatures and there's not much in the way of rain grooves on them either. In fact, they felt quite vague and I didn't like the Supercorsas much at all in those conditions.  Considerable scope for going down on your arse if you pushed really hard, I'd imagine.  I think that for the wide range of weather and temperature conditions I ride in, a good sport touring tyre like the PR3 would give a lot more confidence.  Andy also seemed inclined to this view after riding the ST3. Steering on the Daytona was completely different from ST with its higher, wider bars.  Because of the race-style steering geometry, moving the body around the bike and weighting the pegs was all that was needed to change direction on the D675, with far less emphasis on heavy countersteering.  The faster you went, the less conscious steering effort required!

Up in the hills south of Coromandel, we stopped briefly at a lookout to compare notes and both of us had  huge grins on our faces!  Andy was completely enthused about the grip from the Pilot Road 3 tyres fitted  to the ST and I was blown away with the pin-point accuracy of the steering of the D675.  The other thing which took me by surprise was the relative comfort of the Daytona.  Even for my knees which have taken a hiding over the decades, the high footpegs were surprisingly comfortable.  The thin seat wasn't bad either but for longer hauls, it would definitely have an Airhawk pad fitted to it.  One thing's for sure, you'd never suffer from a cold bum on this bike - heat transfer from the high level pipe and muffler through the thin seat is quite pronounced!

Now here's a thing which I'm sure that many riders have experienced.  If you're not riding too well, often a short stop will make a world of difference and you feel transformed when you hop back on.  So it was with riding Andy's bike.  Even though our stop was less than 5 minutes, hopping back on the Daytona afterwards felt completely natural and my riding was much more assured.

On the run down the coast to Thames with the roads having dried out, we started to use a bit more throttle, particularly when passing small groups of slow-moving holidaymakers.  Whilst the Street Triple is no slouch at all, the greater horsepower at the top end on the Daytona was very noticeable and pretty impressive.  Whilst the top end was indeed impressive,  it still compared very favourably with the ST at lower down in the rev range.  This means that in normal on-road conditions particularly in making snap overtakes, it would completely outshine Japanese IL4's of similar capacity which need to build revs to develop power.  The extremely slim fairing and screen were also more effective than you might imagine.

Is there a downside to the Daytona?  Well yes and no.  It has higher specification suspension than the ST and the setup is on the firm side.  If I was to regularly use one on the Coromandel Peninsula roads, I'd want to knock off a whole lot of preload front and rear and rely more on the excellent rebound and compression damping to lower the tendency to jump about on the more uneven road surfaces. On sweepers with better finished surfaces or for trackdays, it would be nigh-on perfect as it was.  I'd get rid of those Supercorsa tyres though.  The Daytona does have passenger pegs but anyone perched out back is in for a world of pain.  It's that "fitness for purpose" thing though - you don't buy a Daytona for hauling a pillion or lots of luggage about.

On pulling up in Thames before Andy continued home, we were still genuinely smitten with each other's bikes and couldn't keep the smiles off our faces. As I write this quick review, I'd imagine that Andy is telling his wife for the 100th time that the Street Triple is the perfect bike for her.  He can't really lose can he, with a Daytona AND an ST in the shed?  I'd happily do the same except the only thing I'd lose would be my balls, courtesy of someone near and dear!  It's easy to see why both machines have repeatedly won "Bike of the Year" titles in numerous international motorcycle journals.  So there we are,  two incredible machines with the Street Triple having a broader use and the Daytona being more highly focussed. With only being allowed to have one bike at a time by She Who Must Be Obeyed, it has to be the ST for the conditions I ride in, but oh for a Lotto win to help with the case for both of them!

Thanks Andy for a fantastic day, both from the viewpoint of the company, your riding skill and letting me use your Daytona how it was meant to be used!  Catch you for an even longer ride in due course! 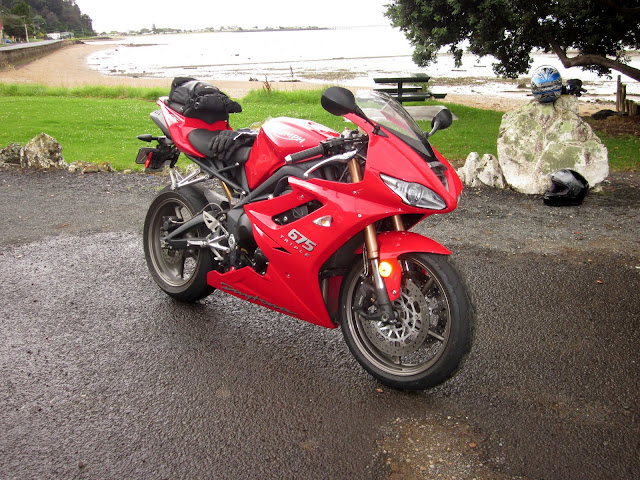