Perth and north to Carnarvon
After returning from the south, there was just time to book a day trip to Rottnest Island, some 19km off the coast to the west of Perth.  The plan involved hiring bicycles to explore the gently undulating island,although the 30 degrees C plus temperatures which were forecast meant carrying plenty of water in the backpacks. 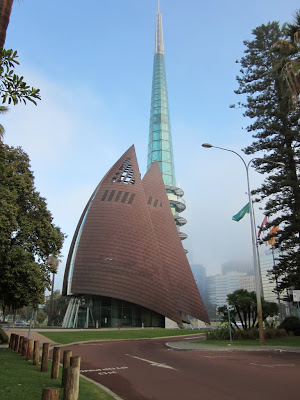 Bell tower near the Swan River

The structure above is a beautiful piece of architecture.  A local explained that the bells were a gift from St Martin in the Fields church, London; following their purchase of new bells.  Undoubtedly a generous gesture but Jennie and I got the giggles imagining the London Clergy to be foisting old cracked bells on unsuspecting commonwealth colonials. ("Those colonials Down Under are tone deaf old chap, let's get rid of our junk on them!") We're told that they sound beautiful so either we're overly cynical or they've welded the cracks. 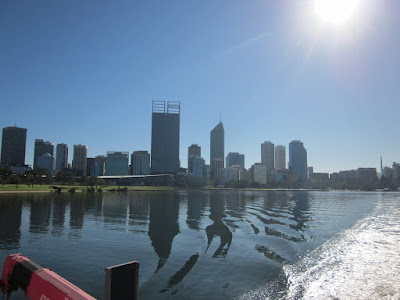 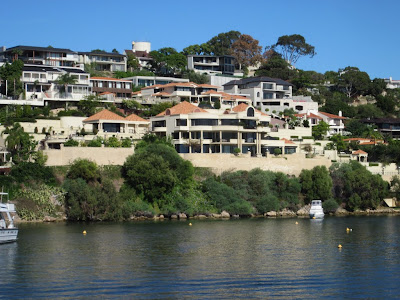 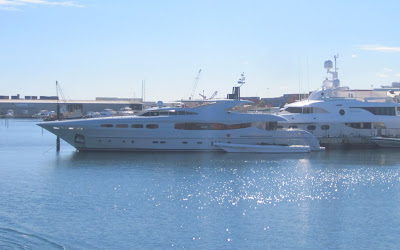 Toys for the ultra-wealthy at Fremantle port 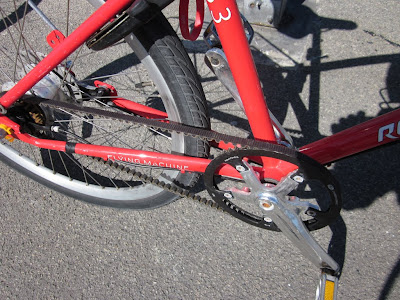 Harleys aren't the only thing with toothed belt drive!

The only worry when setting off on the bikes was a sign which cautioned people to stick to the cycle tracks.  There was little risk of getting lost - the warning referred to Australian wildlife which basically said, "All flora and fauna in Australia is out to kill you".  Mercifully, we only saw one significant creature and that seemed indifferent towards us. More on that in a moment. 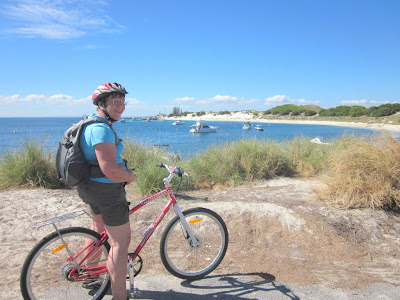 Jennie at one of the white sand beaches 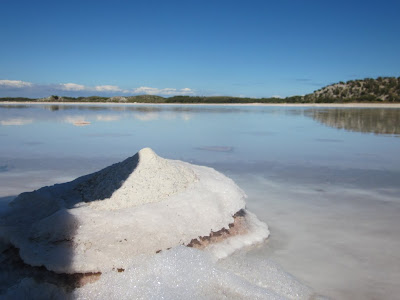 Salt stacks in a shallow lagoon 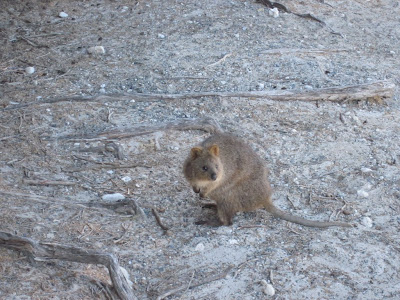 A Quokka - a bit like a 1/6 scale kangaroo with a rodent's head grafted on
(Frankenrat? Frankenroo?)

We came round a corner to find several Quokkas (a quantity of... or a quorum of... perhaps?) foraging on the edge of the road and they seemed completely indifferent to our presence.  Maybe they were lulling us into a false sense of security.  They are clearly intelligent, possessing the ability to read if the symbols on the swing doors of the local general store in the photo below are anything to go by. 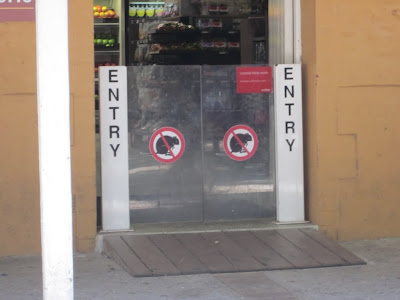 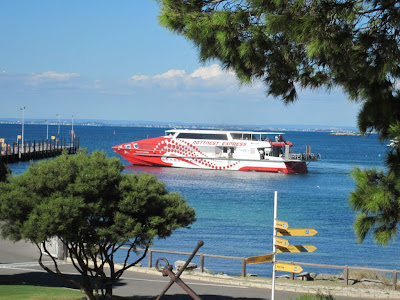 The fast ferry coming for to carry us home, la la

A most excellent outing although thigh and calf muscles (ummm... and backside) knew they'd had a bit of an unaccustomed work-out by the end of the day!

The next day, we headed north to the Nambung National Park to see the Pinnacles.  The limestone structures up to 6 metres tall rise directly out of the desert and look completely surreal.  They're thought to be millions of years old. 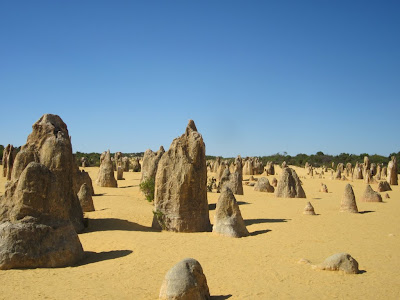 The Pinnacles - totally surreal landscape (and bloody hot too!) 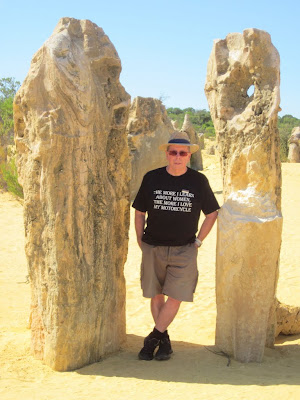 I don't believe what's written on my shirt, honestly! 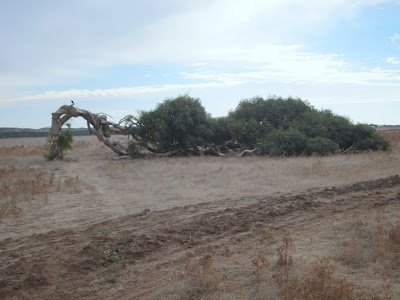 What gives you the impression that it's sometimes a bit windy in this coastal region???

Our next port of call was to the World Heritage - listed Shark Bay, something I'd been looking forward to for a long time.  This area is BIG, covering an area of some 25,000 sq km! 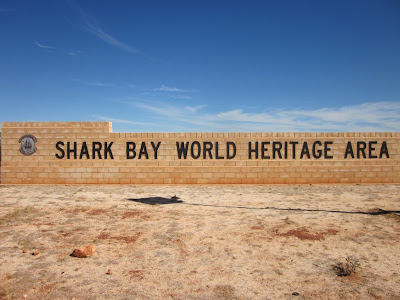 A brick wall in the middle of nowhere!

There is a diverse range of marine life but our first stop was our waterside accommodation at the oddly-named settlement of Monkey Mia.  The first photo below shows a flock of wild emu wandering through the cabin area searching for food.  They're not an aggressive bird but a flock (herd? entirety?) of them will happily surround you with mugging on their minds if you're carrying something tasty! 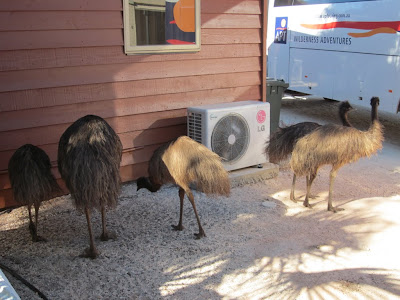 Emus laying in wait for an unsuspecting victim


Shortly after arriving, we went out for a sunset cruise on a large catamaran.  Very relaxing and the sunset was worth waiting for.  The photo below caught the outline of another large sailboat in the distance. 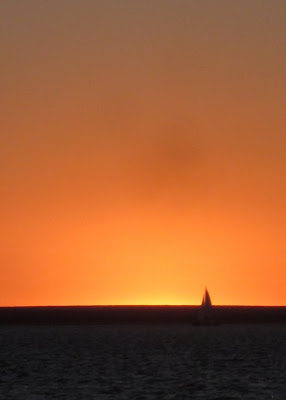 Emus aside, the main claim to fame of Monkey Mia are the dolphins which have been visiting the area since the 1960's.  They're so friendly that they come into knee-deep water to interact with people, even bringing in their young.  The conservation rangers in the area give them little titbits of fish, although quantities are strictly controlled so that they don't become dependent.  I don't know what it is about dolphins, but I always feel both deeply moved and joyous at the same time in their presence. 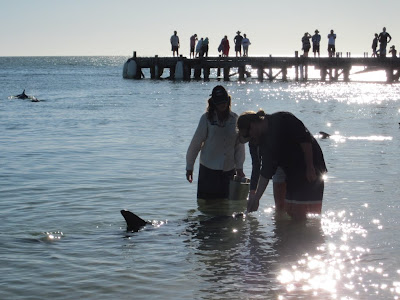 Lots of 'em waiting for a treat

The following morning, we visited Eagle Bluff which looks down on a shallow bay where big rays and sharks can often be seen.  Unfortunately, they must have been further out to sea whilst we were there but it was still stunningly beautiful.  The second photo below is looking back from Eagle Bluff towards the long dirt track approach.  Away from the main north-south sealed highway, dirt roads predominate and with the lack of population and high temperatures, you need to take sensible precautions when travelling.  It's not only creatures and plants which are out to kill you! 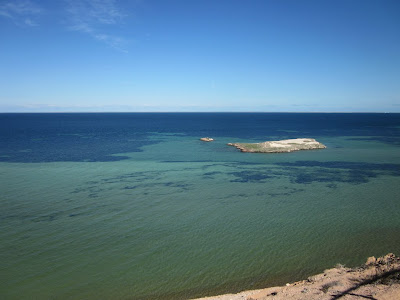 The Indian Ocean from Eagle Bluff

Miles and miles of stuff-all


Further down Shark Bay was Shell Beach, a totally appropriate name if ever there was one!  Have a look at the following photo: 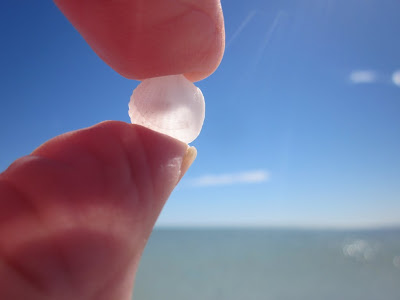 
The origin of these shells is thought to stretch back 4000 years, although it's apparently a puzzle as to why they existed in such profusion.  The beach isn't a few shells mixed with sand, the entire beach is comprised of these shells packed together to a depth of over 5 metres, stretching for 120 km along the coastline.  The beach is so white that it almost hurts to look at it even with dark sunnies on. 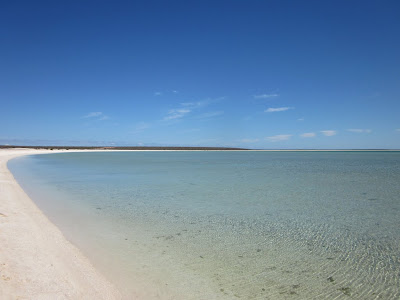 
A bit further round Shark Bay, we visited the Stromatolites, the world's oldest living organisms.  The living microbes that build Stromatolites in a similar way to coral are virtually identical to the earliest forms of life dating back 3000 million years.  They were important in releasing oxygen to kick off more advanced forms of life on Earth.  There are relatively few locations of living Stromatolites left on the planet. 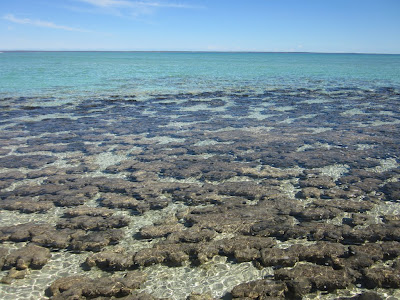 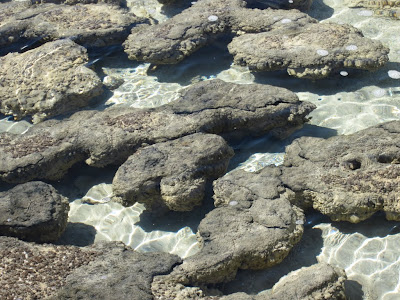 
Shark Bay is an incredible place and deserves its world heritage status.  Our stop that night was at Carnarvon at the north end of Shark Bay and only a few kilometres short of the Tropic of Capricorn!