Leaving Carnarvon to travel to Coral Bay, the gateway to Ningaloo Reef Marine area, the sheer scale of Western Australia and the absence of people became very apparent with huge straights and the very occasional bend to see if you're still awake. Quite often, half an hour would pass with perhaps only one other vehicle in sight. 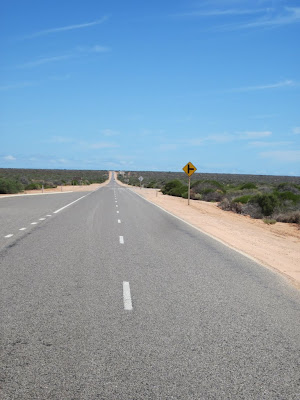 The road to infinity 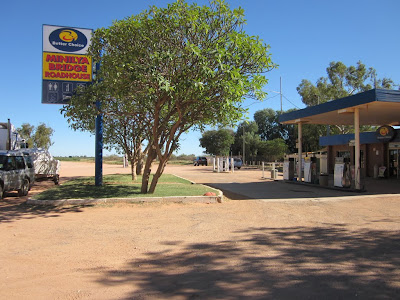 Most of the roads leading off the north-south highway are red dirt,  If I was living in this area, I wouldn't be riding a sport bike with the long straights, dirt roads and cripplingly high temperatures / humidity - that would be sheer masochism.  The weapon of choice would either be a cruiser or more likely an adventure bike with a bloody huge fuel tank!  It was somewhere to the north where we saw a big sign saying "Limited water for the next 632 km", followed by another saying "Cyclone season - have you checked the weather forecast?" Kicked myself for not taking photos but at least Jennie and I were comforted by the fact that the cyclone season was pretty much done and dusted.  A short while later, we crossed into the Tropic of Capricorn. 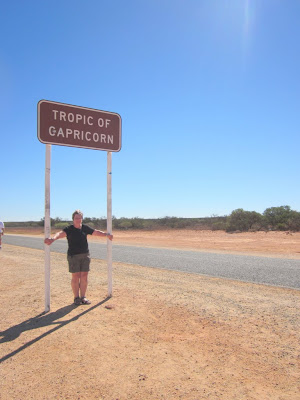 Hot and dry on one side of the sign, even hotter and humid as heck on the other side!

Ningaloo Reef isn't as large or as well-known as the Great Barrier reef on Australia's east coast but it makes up for it by being a lot more accessible.  Also if you have time to venture beyond the reef into deep water (we didn't), you are able to see whale sharks and manta rays up close.  A pity to have missed them but one could hardly complain with all the spectacular stuff we'd seen so far.  We settled for a trip along part of the reef in a glass-bottomed boat.  Photos simply don't do the real-life colour and marine life justice, but here are some anyway. 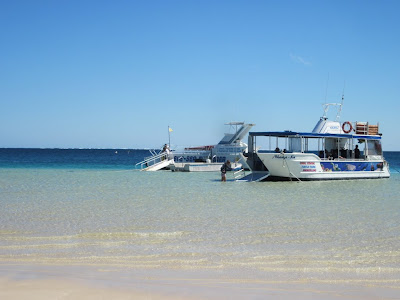 Just wade out and jump on board.... 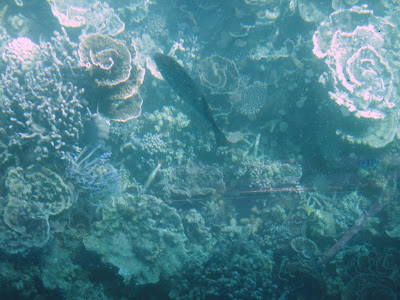 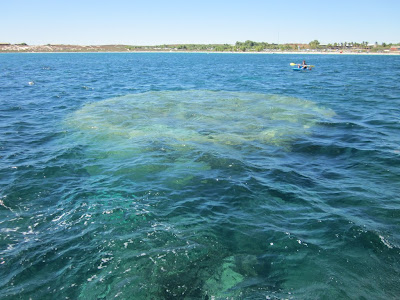 Colossal piece of brain coral about 5 metres across

It was at Coral Bay having a bite to eat that I saw a heavily-laden BMW adventure bike pull up to get gas. It was the same bike I'd first noticed several hundred km south of Perth parked up without the rider.  It even carried spare tyres and from the writing on the panniers, bike and rider were on a round -the-world trip.  We didn't have the opportunity for a chat but the rider looked Indian or possibly South American.  If anyone knows who it is, perhaps they'd be kind enough to comment.  Certainly a very professional set-up and we saw him several times at a distance further north . 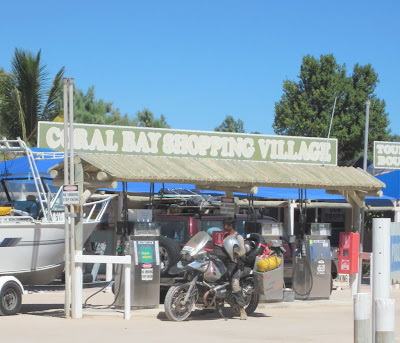 A round the world solo traveller


Heading ever north and stopping at a roadhouse, I spotted this old Holden refuelling.  With 'roo bars up front and loaded up with spare fuel cans and maybe the kitchen sink on the roof, it looked like a survivalists wet dream or perhaps a Mad Max prop.  Guess they were going to spend some time a long way from anywhere. 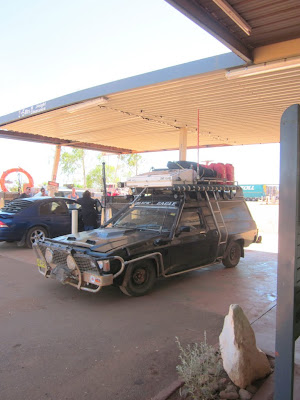 
It was also at this roadhouse where two riders on adventure bikes pulled in.  They were seriously equipped for long haul riding and the Honda shown in the photo below had a massive Acerbis plastic fuel tank.  Despite the heat and humidity, the riders took their personal protection seriously, as opposed to many riders in the Perth area who rode in flip-flops, shorts and no gloves. 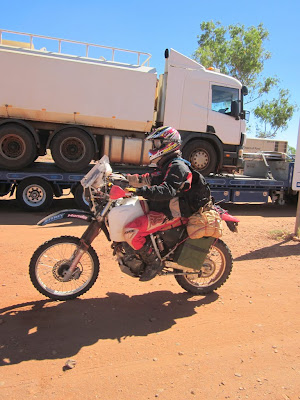 
It was around this area that termite mounds started appearing out of the scrub.  Some of them were pretty large as the photo below shows. 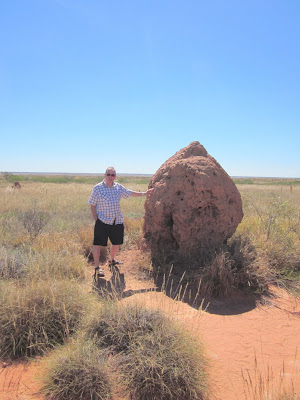 The next part of the trip took us inland into the Pilbara region and the Hamersley Range.  It's an area rich in minerals, particularly iron ore and the soil is a fabulous rich red colour. We were heading for the remote mining town called Tom Price, named after an American geologist who was instrumental in opening the area up.  We felt instantly at home here as the "feel" of the place was practically identical to the pulp, paper and timber town which we spent much of our working lives in.  The hotel was well-patronised by the local miners and their families and the size and quality of the meals were, well....  "heroic" (an understatement!).

We took a guided tour of an iron ore mining operation which was a nice counterpoint to the natural wonders we'd seen, but nonetheless fascinating to a retired engineer.  Jennie thought it was great too! 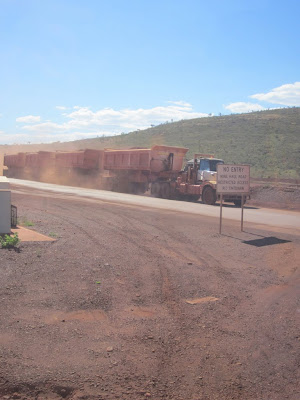 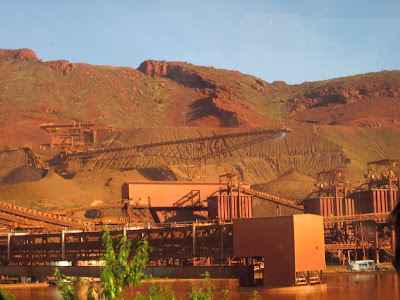 How to make a hill flat in no time at all 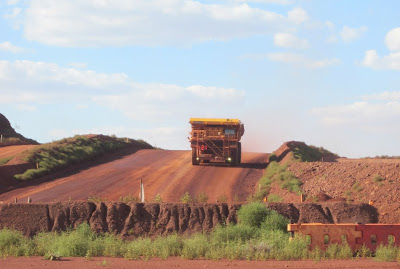 
Apparently, trials are currently being undertaken with driverless trains similar to the setup below carting ore from inland to Port Hedland and they're being controlled from Perth, some 1700 km to the south!! 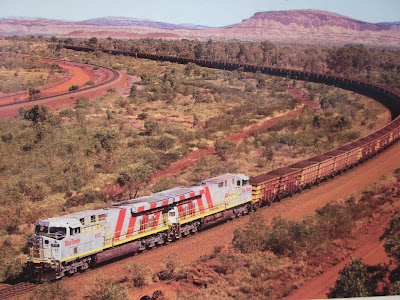 Not far outside Tom Price is the Karijini National Park.  I remembered seeing photos of this area or something very similar when studying geography at school in the UK and the topography was synonymous with Australia in my mind.  The region is geographically very old indeed with narrow, red gorges. Horizontal compression has caused the rocks to buckle and lift over the aeons.  If anyone isn't affected by the wild magnificence of the scenery in the following pictures, it's hard to know what will!  Incidentally, although it's currently autumn in this area, the temperature on the day we were there hovered close to the 100 degree F (38C) mark.  It didn't feel too bad as the humidity was fairly low inland but it's easy to see why water is so prized in this region. 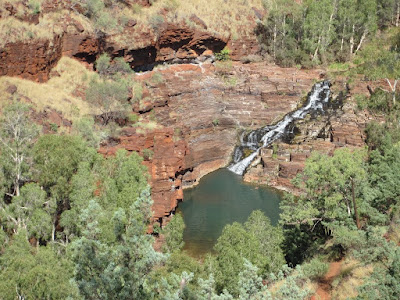 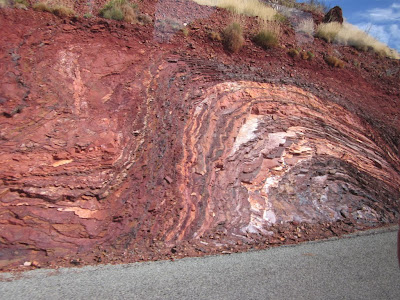 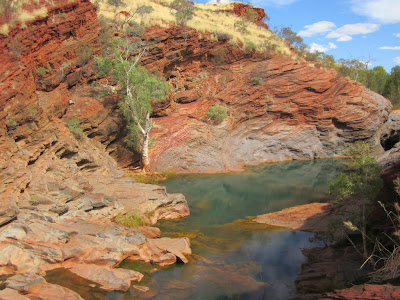 Breathtaking - no other word for it 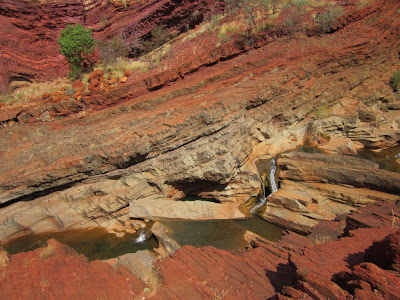 Water cascades down a narrow gorge

The aforementioned photos simply don't do justice to this area so we bought a book of professional photographs as a further reminder of how fantastic Karijini is! 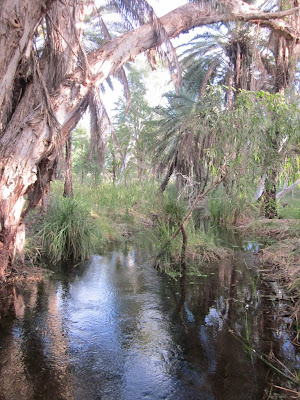 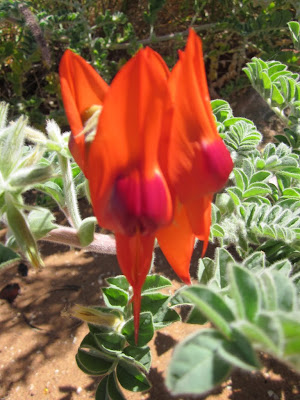 Here are a couple of oddity-value photos for you!  The first is a raised public toilet in a roadside rest area to avoid the flooding which comes in the cyclone season.  All good value, but if the water was lapping round the car windows, having a pee in comfortable conditions would be close to the last thing I'd be thinking of.  I'd probably have wetted myself already! 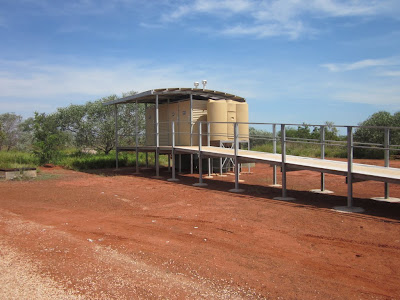 Hard to think of this area being flooded

The following photo was taken at salt evaporation ponds at Port Hedland and of all the photos taken, it's among my very favourites.  The salt accumulating in the water looks very much like ice and some wit had stuck in a brilliantly-painted cut-out of the Titanic sinking - sheer genius!  You'll also notice a shark's fin just in front of it! 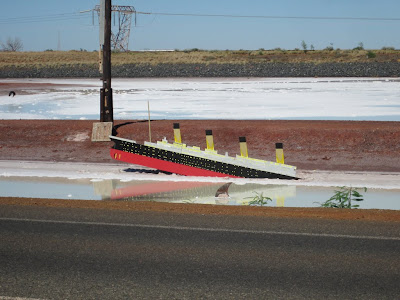 People who do this sort of stuff are to be treasured!


Broome was the northernmost point of our travels and as we pulled up at the waterfront, the VW-engined trike below caught my eye which was beautifully finished in lavender metalflake. The rider was just putting helmets on two women who looked like they'd come from the cruise ship in the background.  Nice way of seeing the sights round Broome. 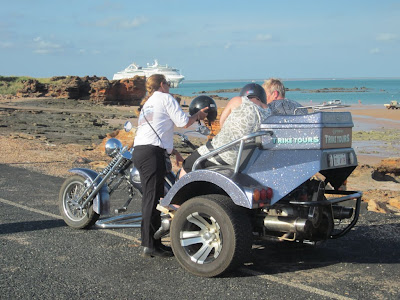 
Nearby was a cemetery full of beautiful headstones with Japanese characters on them.  Broome was the world capital of the pearling industry in the late 1800's and there were huge numbers of Japanese pearl divers who came to Broome. It was not exactly the safest profession in the world and the number of graves reflects that.   The cemetery was a beautifully-kept tranquil place. 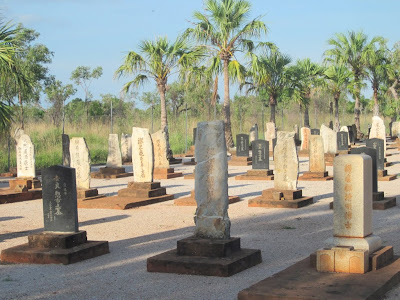 We stayed at the magnificent Cable Beach Club Resort and there are some pics below.  The only downside of staying there was that we got lost every time we set foot outside our room!  Whether by design or by accident, every pathway in the resort ran in a curve and and it was virtually impossible to orient yourself among all the foliage.  Finding the restaurant for both dinner AND breakfast took forever. Should have put a few chalk marks on the path! 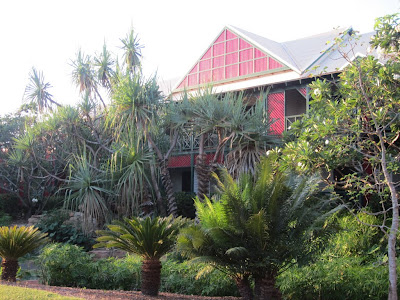 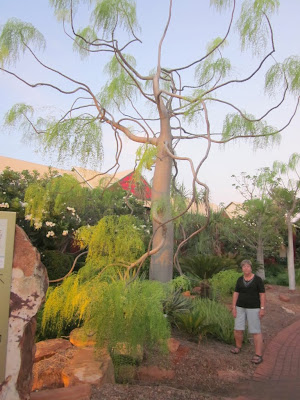 Weird-looking tree - or is it a Triffid? 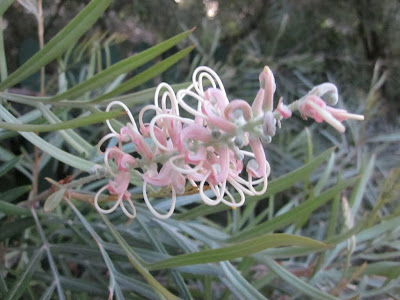 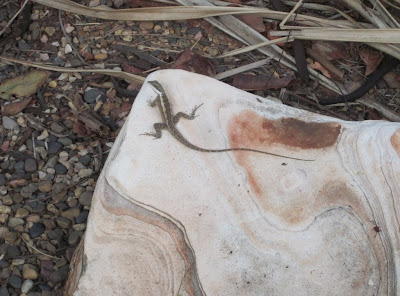 A great place to soak up the sun

That was the end of the northerly part of what has been a simply superb anniversary trip.  It would have been a let-down to have flown directly back to NZ after having been so full-on so we flew back to Perth for a few days of chilling out in the Swan Valley wine region to do our own thing.  More on that in the final post.