Who reads our blogs, anyway?

I don't know whether other moto-bloggers have ever checked what their top 10 most-viewed individual posts are but I was simply curious about what interested visitors the most.  Using the numbers alongside each post in Draft Blogger, the 10 posts most-viewed were noted.  The results may not be all that surprising given that many of the topics listed have potential appeal among the broader motorcycling community, particularly when searching the internet.  The No 1 post however, has over 4 times the number of views than the next highest.  Now that is surprising!

No real idea why this short post about racebikes in NZ should have attracted so much interest.  One possibility is that internet searches for Burt Munro of "World's Fastest Indian" fame threw up some of his bikes (pictured) that still reside in a hardware shop in the southern NZ town of Invercargill.  More on Burt Munro later. 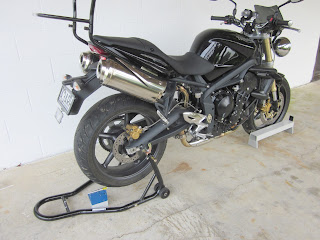 The post covered an NZ-made Ducati/Aprilia paddock stand I'd bought for the Striple and how the laser wheel alignment rig which had been knocked together for my Blackbird was adapted to suit the Triumph.  Probably boosted by internet searches on wheel alignment methods. 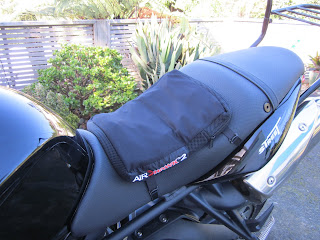 One of the major topics on any bike forum (and internet searches) is seat comfort (or more accurately, seat discomfort) of standard seats.  At least aftermarket suppliers make a living from fixing discomfort, whether it be from custom seats or the cheaper and equally effective Airhawk pneumatic cell pad range which was reviewed in this post. 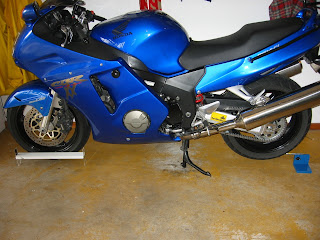 The original post on how to build a cheap laser wheel alignment rig.  The post has been linked on numerous bike forums world-wide as an inexpensive means of improving your handling.  Feedback on various forums suggests that many people didn't realise that their wheels were out of line!  You shouldn't nececessarily rely on manufacturer's markings and you certainly shouldn't rely on tyre fitters to do a good job! 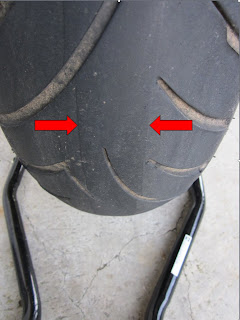 There is more bullshit spoken about tyres and lubricants on bike forums than virtually any other topic (apart from riders whining about cage drivers whilst conveniently avoiding doing anything about raising their own roadcraft skills)!

This post attempts to dispassionately review what's important for road tyres with a bit of personal experience chucked in too.  The later tyre-specific evaluation posts scored well too. 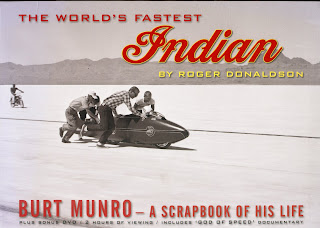 Burt Munro has always been an icon in this part of the world but his popularity soared with the release of  "The World's Fastest Indian" movie.  It's been interesting to watch the number and location of blog hits over the last 6 months or so which from a bit of research, have a direct correlation with what countries the movie has been shown on TV at those times!  This book was an incredibly generous gift from fellow Kiwi blogger Roger Fleming  and is THE definitive book about Burt. 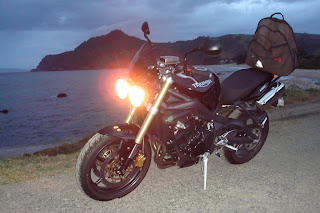 The 3 international Triumph forums carry links plus a few other sites on the Internet.  Guess some people wanted answers to the question "WHY??".  In reality, there seem to be a lot of internet searches on whether the Triple is suitable for long distance riding, whether against the clock or touring.  In reality, most bikes would probably be fine - it's more likely the rider's mental horizons which lead to a successful and enjoyable long ride. 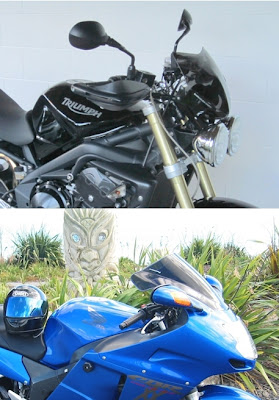 A comparison between two quite different bikes after 8 years of Blackbird ownership and just 2000 km on the Street Triple.  People were perhaps just plain curious with respect to just how a modern "iconic" medium capacity unfaired lightweight bike would stack up against what once used to be the World's fastest road bike.  Maybe they were also curious as to why would an owner would change from a bigger "hyperbike" to a smaller, unfaired one?  The article was written principally for the author to sort out his own feelings! 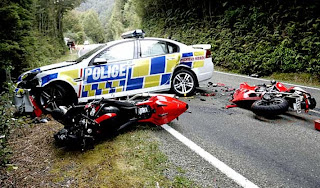 Motorcycle accidents are another favourite internet search.  This particular post highlighted the work of a prominent academic in allegedly exposing manipulation of accident statistics by the authorities in New Zealand.  Incompetence at best or at worst, clouding the real issues for political convenience?  Presumably, there is a similar potential for manipulation world-wide by various authorities.  Irrespective of the alleged implications, action taken to date does not address the root causes of accidents. 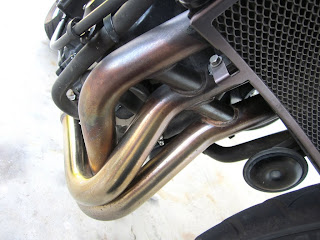 It stands head and shoulders in terms of viewing above every other post.  That's probably not surprising as the Triple is a bike which is currently in production and has won a lot of international "bike of the year" awards.  It's inevitable that potential buyers and owners alike will conduct an internet search... just like I did in fact as the first step to buying a Street Triple!

NONE of the 10 posts listed above have anywhere near the biggest number of comments at the bottom of each post!  The biggest number of comments posted are where there is either a human interest or scenic/travel aspect as opposed to what might be called "technical" motorcycle posts.  It seems that what people do or where they go evokes the greatest responses.  The biggest number of comments on this blog came after 8 months of posts detailing the often stressful journey of continuously trying to raise my riding skills sufficiently to pass the Institute of Advanced Motorists full membership exam, culminating in: Pain and Extreme Pride .  I guess that people could empathise with both the stress and elation of passing a 4 hour, 220 km practical test whilst being observed by a police rider/IAM examiner who was among the best of the best!

I guess there's a place for both technical and human interest posts on a blog but despite the technical articles being tops in terms of number of views, it's human interest and travel which I enjoy writing most, perhaps because humour and irreverence can be liberally used!

Have any other moto-bloggers pondered about their blogs?  Would be really interested to hear as I personally enjoy the blogging aspect of learning about other's lives and where they go.
Posted by Geoff James at 12:32