Paranoia or are they REALLY out to get you???

I've not been accessing the internet much for the last few days having been away from home on a couple of missions.  On reading a few fellow moto-bloggers websites, there seems to be a common thread where car drivers seem hell-bent on removing fellow road users from existence at a greater frequency than normal.  Maybe there's some sort of celestial alignment causing the problem as it isn't just confined to the Northern Hemisphere! The driving is certainly like the offender's heads are up their Uranus.

Last Thursday, Jennie and I headed off on a business trip 400 km to the south.  The day didn't start well as the distance magically increased overnight to 500 km thanks to a landslip blocking the most direct route.  Going round the long way to get off our Peninsula, a ute (utility... Kiwi and Aussie-speak for a pickup) came out of a side turn in front of us.  We then proceeded to witness some of the most incompetent driving we've seen for a long, long time.  It's appropriate to mention that the ute was emblazoned with the name of the driver's employer - a reasonable-sized company, together with their website address and telephone number so it was hardly inconspicuous.  Oh and another relevant fact....in New Zealand, we drive on the left hand side of the road.

We'd been following the ute for a minute or so when it caught up with another ute towing a trailer down a reasonably long straight.  Inexplicably, the driver held off passing the other vehicle until a few tens of metres before a blind bend at the end of the straight.  Had something appeared coming the other way, the consequences would have been dire.

It turns out that this was no isolated rush of blood to the head. On every bend, blind or not, he cut the corner and on the blind corners - someone coming in the opposite direction would have no chance.  Lazy driving at its worst with terrible potential consequences. We were both horrified and under those circumstances, it's hard not to think about someone you love coming the other way.  With cameras and videos being so compact and easy to use these days, people tend to carry them just like they'd carry a wallet and we're no different.  Makes it much harder for a miscreant to say that a certain event didn't happen.  Jennie blazed off a series of photos at different corners as a record without really knowing what we were going to do with them.  It was pointless calling the police traffic hotline (*555) as there are only a handful of cops patrolling the whole Peninsula and besides, mobile phone coverage is pretty patchy in the area.  After following him for 20 minutes or so, we pulled over for a short stop.

Here are a couple of photos to illustrate just how far the offender was over the centre line on most corners.  If there are any protests from bleeding hearts about his human rights being violated by publishing the photos, tough s*it.  What about the rights of other road users to expect to live through the day? 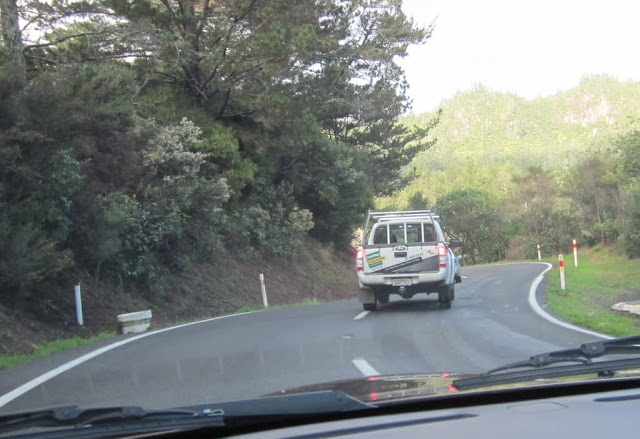 Insanity personified - we drive on the left 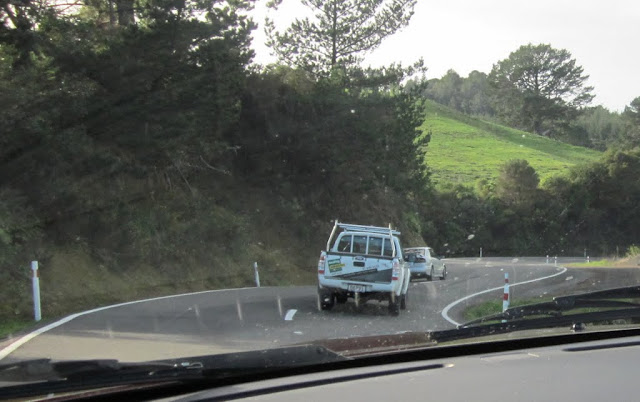 Yet another example of appalling driving

During the trip, we debated what we were going to do.  Shake our heads and do nothing might be an option for a one-off transgression of a minor nature but that was never going to happen with multiple examples of bad driving.  The next option was to send the photos to the police.  We had some reservations about this being the immediate best option. We thought rightly or wrongly that that if the driver entered the justice system, there may well be a heavy fine and possible loss of licence but little else in the way of discretionary powers open to the authorities.  There was a time when I'd have been quite happy for the offender's head to be stuck up on a long pole by the roadside (metaphorically speaking) as an example to others but not any more.  That approach, however satisfying, probably only generates driver resentment and does eff all to prevent it happening again.

We finally decided to send the photos to his employer when we got back from the trip with a short description of events but completely leaving out any outraged demands etc, simply to judge the reaction.  It was late on Friday afternoon when the email got sent via the company website.  Even though it was late, we got a response within half an hour. The reply started with a profound apology, then noted which branch of the company the vehicle was based at and that the matter would be taken up immediately on Monday morning.  In view of the response, we then responded with a possible approach.  The suggestion was for the company to consider as part of any punitive action, mandatory attendance by the driver on an advanced driving course, turning it into a win-win situation.

We have yet to hear about any further action so this whole issue isn't closed yet.  I'll add an update when there's something else to report.  The main reason for posting this incident is that with the technology available to us these days, there are other options available than simply complaining about the poor standards of driving, but doing nothing else.  I guess the death of my best friend 2 decades ago due to another driver crossing the centre line has coloured my views somewhat.  However, joining the IAM last year has opened my eyes to possibly better options in some circumstances than simply using the sometimes heavy hand of the law - let's see how it works out.

As a parting comment, if someone is inclined to ask about the impact on the driver's employment and family etc through not turning a blind eye..... how would it be viewed if that driver's actions had caused grief and suffering to an innocent road user's family?  Damned if I do and damned if I don't - guess that my conscience is pretty clear but it's still a bit of a moral minefield.


Addendum:  A very satisfactory outcome thanks to both the person's company and the employee himself.  I won't go into the details for privacy reasons but totally happy.  I guess it demonstrates that as road users, we don't have to accept poor driving and that we can do something about it.