The bike that got me back into motorcycling

I've loved bikes for as long as I can remember but motorcycle ownership went on hold with marriage in 1972, moving to NZ in 1975, building a career and raising a young family - a pretty typical scenario for many of us.  I'd also got into competitive sailing although bikes were never forgotten.  On one fateful day in 1987, a visit to Auckland to pick up a yacht sail right next door to a Honda dealer was to cause a few ructions in our household.

You know how some bikes trigger an instant emotional connection?  (Otherwise known as "I want it, and I want it NOW").  Well, that's what the bike on a stand in the dealer's window did to me, completely out of the blue.  Jennie wasn't best pleased with several days of whining on my part and reluctantly gave permission for ownership.  A week later, I was the proud owner and not long after, she was the proud owner of a piano at nearly twice the cost of the Honda.  That's what you call a quid pro quo in spades!!

It's called a GB400TT, predominantly produced for the Japanese domestic market and loosely modelled on the classic British sporting singles of the 50's and 60's such as the BSA Gold Star. The motor was a modified XR400 single cylinder trail bike engine with a 4 valve head and a 2 into 1 exhaust system.  Finished in rare midnight blue metallic paint and silver guards with plenty of chrome, it looked gorgeous.  The following photo was taken not long after taking ownership. 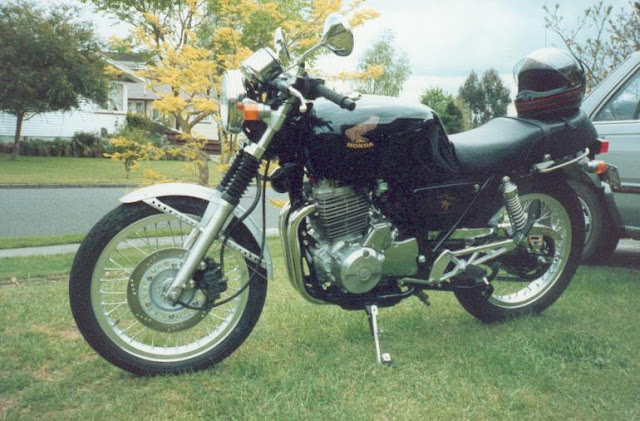 It was a great bike to re-launch a motorcycling career - light, reasonably quick (around a genuine 100 mph / 160 km/hr) and utterly reliable.

Now, the reason for this post is that I've just made one of my occasional forays into our many boxes of photos and found some extra shots taken around 1990.  At that time, I saw an advert for locally made aftermarket fairings and enquired about one for the GB 400. I got a reply saying they had one based on a Yamaha RZ 350 and a few weeks later, the deal was done.  Had it sprayed to match the bike and signwritten in gold - looked like it was made for the GB.  Here are some pics... 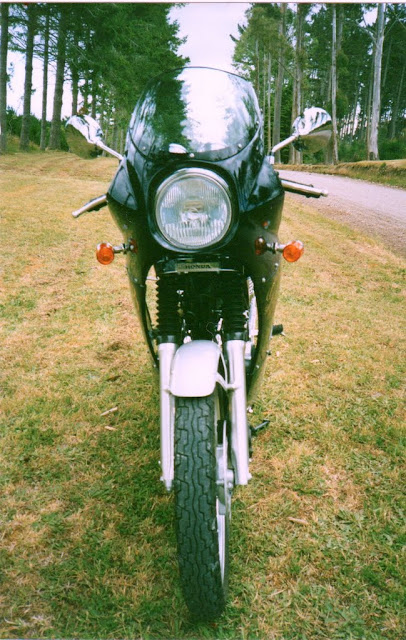 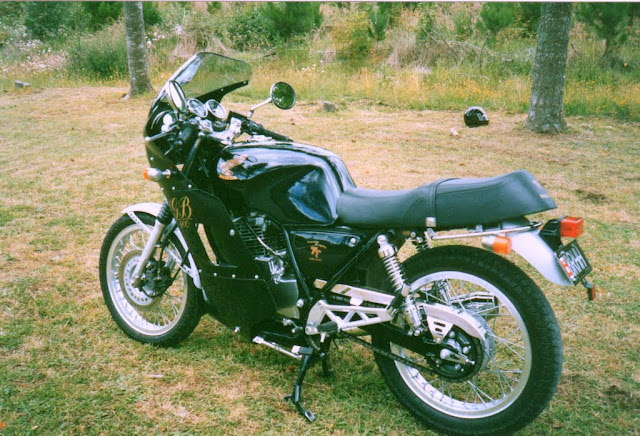 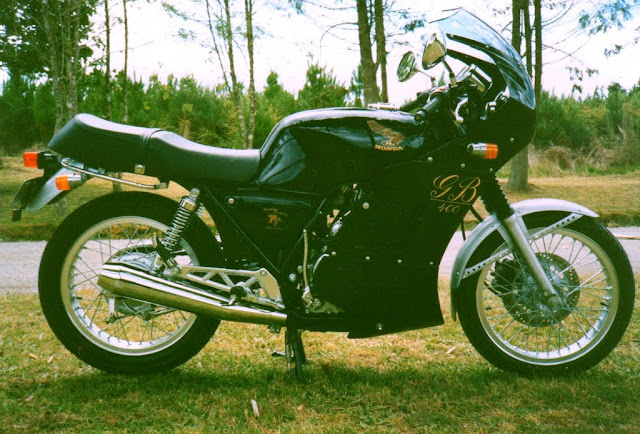 It was a delight to ride - light and flickable.  Reminiscent of the current Street Triple in that respect, but with only 1/3 of the gee-gees!  I even bought a single race seat for it later on to make it look even more like a British classic racer.  Spent 5 happy years with it until stepping up in capacity and buying a BMW K100 RS. Our eldest son inherited it for a year or two before it got sold to a delighted buyer in the South Taranaki region of NZ.  A great machine for getting me back into bikes and forever held in great affection!

Now for something to put you off your dinner, hehe!

Some of you may remember previous posts featuring my mate and fellow Coromandel resident Paul who owns some classic Nortons, including the superb 850 racebike below.  A few Kiwi friends who read this blog have actually met him and will attest to his "apparently" reserved demeanour. 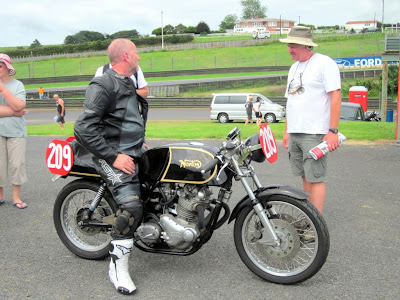 Paul and his 850 at the Pukekohe race track

Now you may wonder how the residents of a remote village like Coromandel (pop 1600 on a good day) spend those long winter evenings apart from varnishing their banjos and making moonshine. Well, they hold a Mizz Coromandel pageant and dinner in the local school hall to raise money for the local food bank.  The unique difference is that the entrants are all macho guys - loggers, fishermen, engineers ........ and Paul!!!  They had to parade on the raised catwalk in what might be described as "local daywear", swimwear and evening dress.  Most of the entrants appeared to have consumed a fair bit of alcohol to get them through the ordeal!

Laugh?  I nearly choked to death!!  Some guys went the whole hog with a full body wax and looked (blush) stunning.  It was even funnier seeing the more ummm.... hirsute guys with masses of chest and back hair prancing about in glorious costume!

Anyway, here are some shots of the normally quiet and retiring Paul as Mizz Whiplash (or something like that). 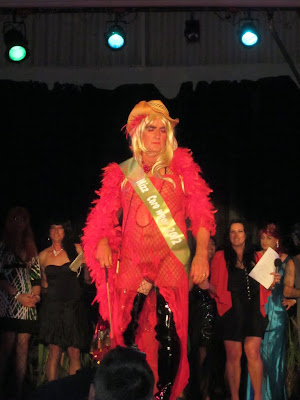 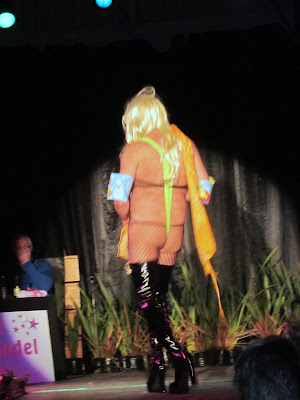 When the Master of Ceremonies commented on the brevity of his attire, Paul said that he'd spent a whole $20 on his green swimwear and about $10 of that had disappeared up his arse - brought the house down!!

Anyway, a massive amount of money was raised for the local food bank and everyone had a truly memorable evening, even if we won't see Paul in quite the same light again - what a star!!!!  Maybe it's a commentary on all Norton owners....... ;-)