Rectification and a rapid ride....

Last week, I had a message from my Triumph dealer in Hamilton that there was general recall for Triumph Street Triples and 675 Daytonas up to a certain VIN number to have the voltage regulator/rectifier replaced.  I've never had any bother in nearly 3 years of ownership but from looking at a couple of Triumph forums, some others have been less fortunate.  There was a similar problem with Honda Blackbirds pre-2002 and although the issue had been present for a number of years, Honda-San made no attempt to sort the problem out with owners who broke down, often in out of the way places.  It therefore came as a delightful surprise to learn that Triumph would be replacing the R/R at their cost, including labour - maximum Kudos to them!

The dealer is some 170 km away but as we've had some nice sunny days for a change, it was a good opportunity today to beat the winter blues and go for a decent, rapid ride.  I must say that before setting off, there was some vague unease as to whether Sod's Law would strike with a R/R failure on its last run before replacement; leaving me stranded somewhere in the countryside. Fears turned out to be unfounded of course. 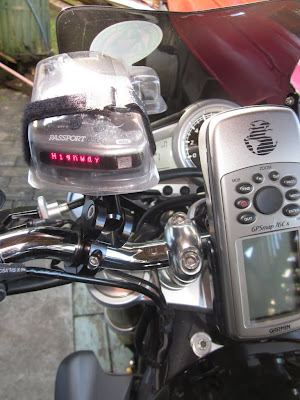 Most of the journey is through countryside and a "brisk" pace could be maintained with minimal other traffic about.  Rocking up to the Hamilton Motorcycle Centre is always such a pleasant experience because not only are their team on top of their game in terms of competence, the relationship with their customers is flawless.  On pulling up, Matt, the senior workshop technician and one of his team walked out to say hi and that they were ready for me - still getting my riding gear off whilst it was wheeled inside! 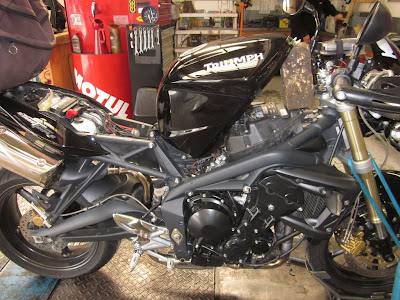 Prepping it before hoisting it to eye level

The photo below shows the old R/R (the finned block) just to the left of the monoshock.  Not only is it directly behind the engine, it runs down the axis of the bike so there isn't much area exposed to cooling air and these mothers run hot!!  It would be a really fiddly job, but the guys simply unbolted the top of the rear shock which made it a straightforward exercise. 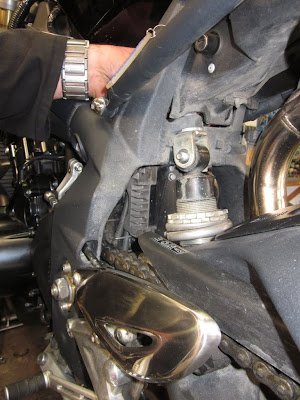 Not a job for large hands! 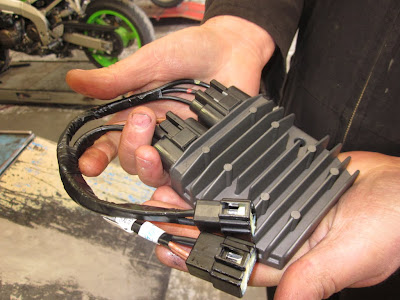 The new R/R has a transverse mounting, exposing a bigger surface area to cool air so that should aid reliability, together with whatever they've done to the internals. 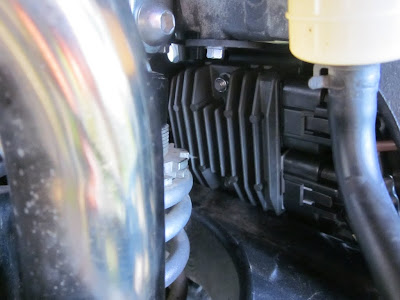 Whilst the guys were putting it together again, I strolled into the showroom to see what goodies I could drool over.  Readers who have seen previous posts about the Hamilton visits may remember that the dealership covers Triumph, Ducati and Kawasaki. First bike to drool over was a Ducati 848 Corse.  This must be one of the most beautiful bikes on the market - absolute design excellence.  I'm not sure that my knees would bend far enough to get my boots on the pegs but if we won Lotto, I'd buy one as a lounge ornament (err... subject to CEO permission of course). 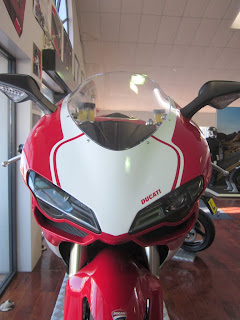 Talk about going weak at the knees! 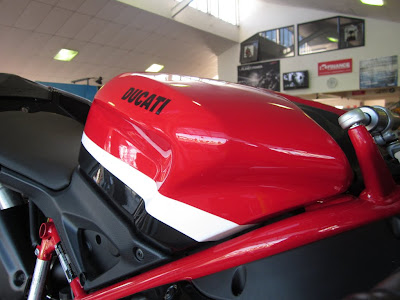 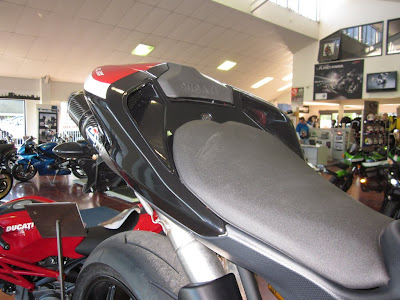 The seat is a work of art by itself 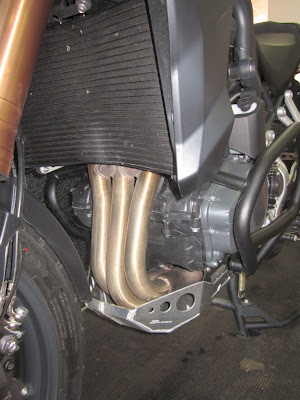 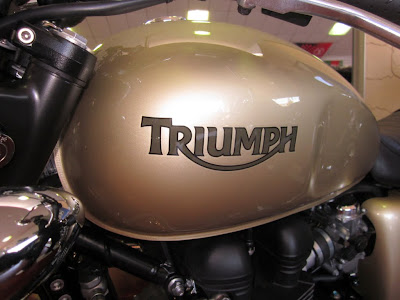 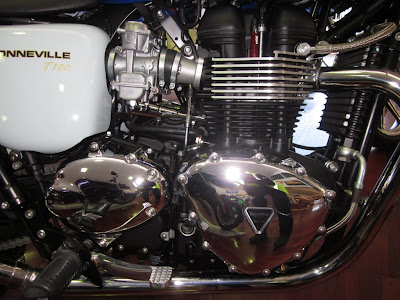 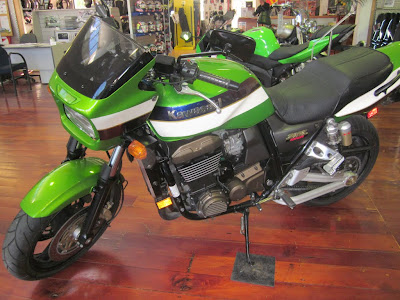 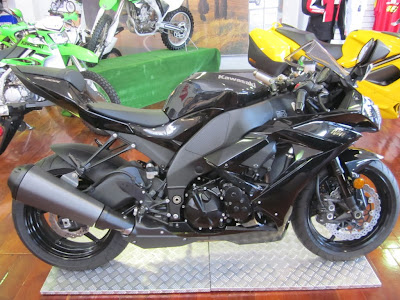 If Darth Vader owned a bike, this would be it - the wicked ZX10R 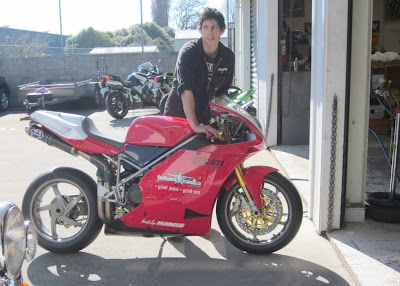 Less than an hour after arriving, I was on my way again.  Is there any better way of spending a morning..... riding 350 km in great weather, looking at some fantastic bikes and dealing with a business which is right at the very top of its game - thanks a million guys for the magnificent service!