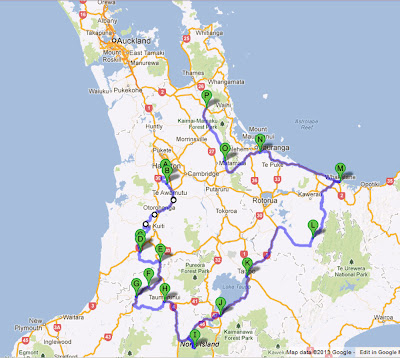 Just got back from one of the genuine highlights of the year when a bunch of old friends get together for a 3 day weekend ride somewhere.  Hard as heck to organise what with work and family commitments and the widespread geographic location of each of us but boy, is it worth it!  And just to lift the overall tone of the group (some may say otherwise) that famous international blogger Rogey was invited along too!

Riders from Auckland, the Coromandel Peninsula and Wellington converged on Richard and Maxine's country residence in the Waikato province for a magnificent brunch prior to departure on this year's behave badly without wives and partners being present to exercise a moderating influence!

Davey from near Wellington rode to Richard's place the previous evening and I was the first to arrive on Saturday morning. The Auckland contingent arrived somewhat later due to navigational incompetence. Apparently, they only know their way to the trendy central Auckland cafes.  At least one of them had the cojones to ring Richard up and admit they were lost, hehe!  After the ritual banter which followed, Richard fired up the BBQ and a splendid brunch was served. (And Rog still managed to whine that there were no hash browns to go with the gourmet sausages, bacon, mushrooms, toast......). 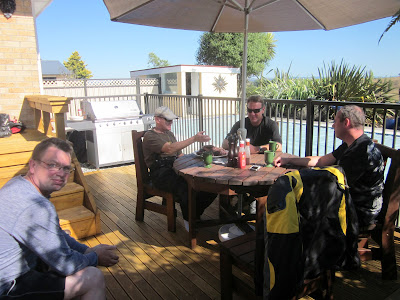 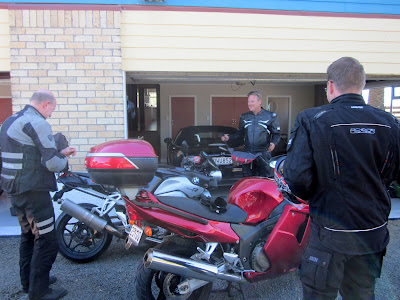 Richard, Andy and Davey kitting up

Richard was responsible for organising the route through his patch, the Waikato/King Country provinces.  What a revelation!  Back roads with virtually no traffic at all - twisties made in heaven but it was a good job he was leading as the rest of us hadn't a clue where we were for much of the run down to Taumaranui, our stopover for the night.  The drought which is currently gripping NZ was really apparent with the fields a yellow colour instead of green.  The high temperatures also required a lot of vigilance with tar bleed-trough in many places - it would be so easy to lose front or rear traction with incautious throttle usage.  Vigilance was also required to keep well-hydrated in the heat with full protective clothing on. Very few photos from this part of the ride as we were ummm....  pressing on a bit but the scenery was spectacular, drought or not. 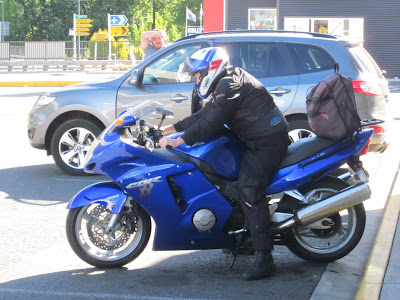 Dave checking his radar detector prior to a bit of "spirited" riding ;-)

Stopping briefly for a stretch provided the opportunity for some gallows humour.  The stop was on the roadside in the main street of Ohura.  Once supported by a prison and a coal mine, both of which have closed, the population has dropped from around 3000 to less than 200 in the district.  A primary school for the local farming community's children and ex-serviceman's club seemed to be the only functional items.  Comments about it being the perfect location for a zombie apocalypse movie were bandied about, together with mutterings about getting out of the place before sundown.  One of the group was certain that he heard the strains of a banjo :-).  All terribly unfair on the the local residents of course, at least those of them who can come out in daylight.

All joking aside, there are apparently strong indicators of significant quantities of coal in the area which might yet provide a welcome boost to the local economy.  Hope it all works out.  Thanks for the great job of leading us on day 1 Richard! 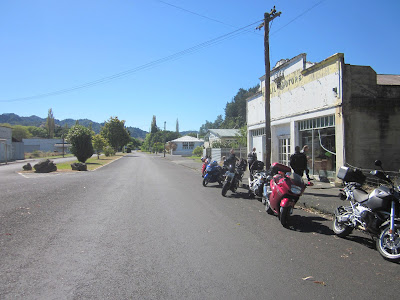 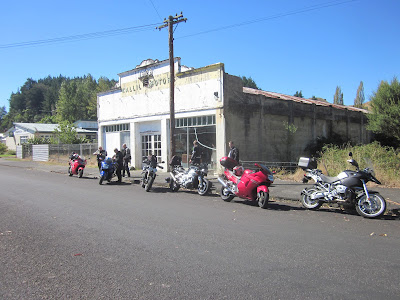 What once appeared to be the local zombie auto repair business

Our stop for the night was the small town of Taumaranui.  A really friendly welcome at one of the local motels with advice that the ex-serviceman's club right next door did great meals and drinks at reasonable prices. They were right too!  Great food and there was also a singer who did an absolutely superb job of Johnny Cash numbers.  However, the highlight for us was Rogey flirting outrageously with an elderly waitress - we were close to tears!

Next morning was cloudless again and we set off for the nearby Tongariro National Park.  NZ sits on the Pacific Ring of Fire and the park has 3 active volcanoes.  The tallest of the 3, Mt Ruapehu is 2800 metres (9200ft) high and has road access up to the ski village on its flanks.  Yep, Kiwis think it's quite normal to ski on an active volcano!  Some of our team hadn't been right up to the ski village so yours truly lead the way up.  The views were spectacular although we'd never seen so little snow on it but boy, did we feel the temperature change as we gained altitude! 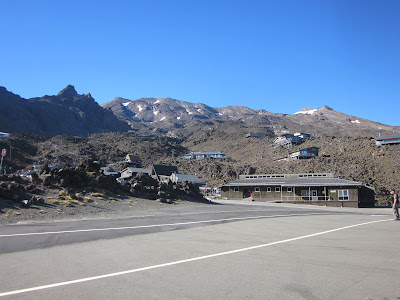 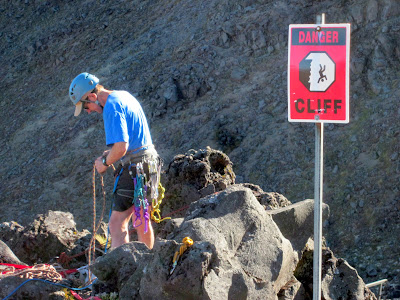 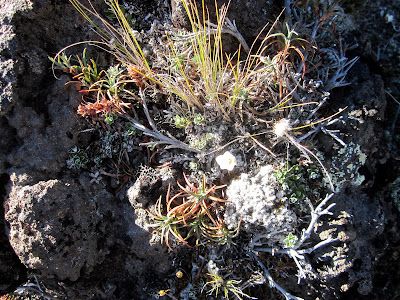 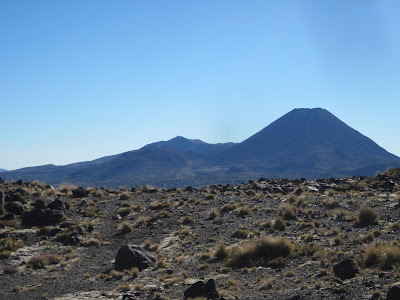 
A coffee stop before leaving Tongariro National Park gave the Auckland contingent the opportunity to level the score after being criticised for losing their way to Richard's place on day 1.  The country boy from Coromandel (i.e me) ordered a Chai Latte to drink. According to some (especially Rog), this was considered unmanly, although he didn't quite put it as delicately, you understand.  Score duly levelled.....

Descending from the high country, we stopped at a lookout overlooking Lake Taupo which covers an area of 616 sq km.  It's a spectacularly beautiful lake full of big fat trout but the worrying fact is that it's the caldera of a supervolcano which still has minor (be thankful for small mercies) hydrothermal eruptions. One day...... 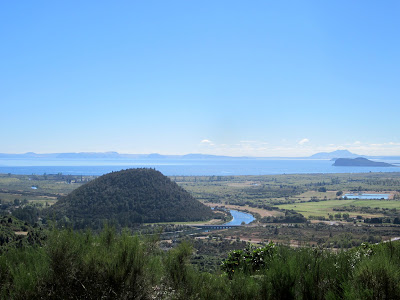 A small fraction of Lake Taupo from the lookout

Badass bikers scaring off the foreign tourists at the lookout

A nice ride up the eastern side of Lake Taupo followed the exit from National Park with a bit of reliance on the radar detectors and trained eyeballs for radar camera vans and cops as this area is a favourite for revenue-gatherers.  No worries!  At Taupo township where we stopped for lunch, further merriment at my expense was had as the rest of the team had food with "manly" meat in it, whereas I had a paninni filled with pesto.  Many of the responses were largely unprintable.  How is it that mates are far harder on each other than any enemies would be?  Best just to grit your teeth and soak it up!  Sadly, Richard and Rog both had to work the following day so they headed directly home from Taupo.  Awesome guys to ride with and great fun - doesn't get much better than this.

The remaining 4 of us continued up the Taupo - Rotorua highway with no dramas.  The whole region has a lot of geothermal activity and we stopped off at some roadside boiling mud pools to have a look.  The drought had reduced the level of activity but they were still chucking some mud into the air and making great gloopy noises.

Shortly after the mud pools, we took to the back roads through the Kaingaroa Forest towards the coastal town of Whakatane where we were due to spend the night.  On this sparsely-populated road, there's a 7 km long straight. It's a heck of a temptation to pin the throttle down it but it speaks volumes that apart from a very quick spurt into the highly illegal realms, none of us were tempted to go super fast.  The consequences of losing your licence don't bear thinking about but besides that, the real fun for most riders is doing a professional job in the twisties.

Temperatures on this part of the trip were really high and there was some real heat radiating off the road, with molten tar in a lot of places and a break was taken at the Matahina dam to rehydrate.  The 86 metre high dam is rammed earth and worryingly, the village of Te Mahoe is situated immediately on the "down" side of the dam.  However, there was a 6.25 magnitude quake in the area in the late 1980's which caused damage, but not to a life-threatening extent so it must be pretty robust! 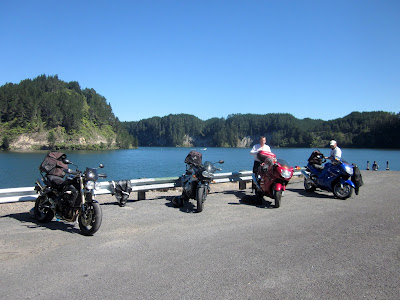 On top of the Matahina Dam

Four hot and tired riders arrived in Whakatane late afternoon and after a shower and a beer or two, began to feel like members of the human race again - another great day of riding with cherished friends. 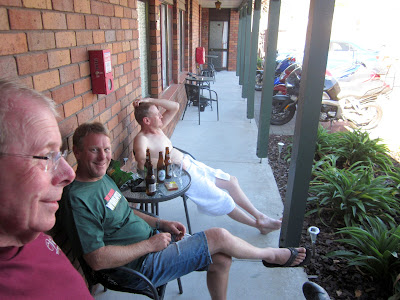 Yours truly, Andy and Dave making himself really comfortable!

The following morning after breakfast at a pavement cafe, Davey headed south to home just north of Wellington via the East Coast , a ride of 8 or 9 hours with stops.  It always feels a bit sad when any of our mates peel off to go home as we're so tight-knit.  Andy, Dave and I continued our journey north in beautiful conditions, albeit a bit hot in all the protective gear and soon it was time for me to split and head back to Coromandel whilst they rode home to Auckland. 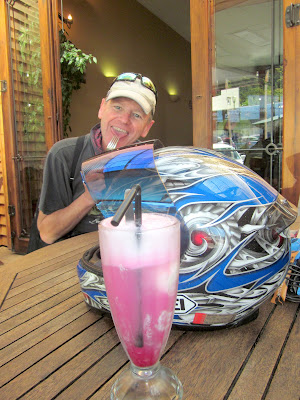 Dave laughing at my raspberry soda... oh the shame....

Reflecting on the tour, it's fulfilling on so many levels.  Riding with such competent riders means that you know exactly where they're going to be positioned without having to worry about them.  You also know exactly how they're going to react in any given circumstances and that they're also watching each other's backs, all of which makes the near-1000 km ride totally stress-free and enjoyable.  Exploring NZ's back roads is also a real buzz.  Then there's the social angle... for us all to get together, it's a more or less annual affair but it's always like we've never been apart.  Poking fun at each other from the get-go with no quarter given or expected, laughing so hard until the tears flow (our wives and partners would really be rolling their eyes if they overheard some of the bizarre conversations but what goes on tour, stays on tour) - guess these are the things which make up true friendships.

Guys - as always, it's a genuine privilege to ride with you!