Some idle thoughts about inspirational people

A couple of weeks ago,  I had a meeting with the Chief Motorcycle Examiner of the NZ branch of Institute of Advanced Motorists, Philip McDaid.  It's a registered charity and office-holders receive no remuneration -  purely voluntary.   As past trainees, we all received world-class advanced motorcycle mentoring and as we have progressed through to being mentors ourselves, we are now helping others; as well as continuing to learn ourselves. Very much a case of paying it forward - a perfect outcome. 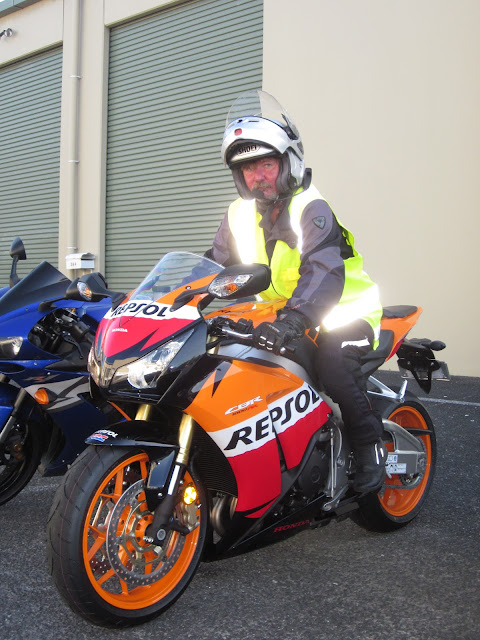 After briefing Philip about developments in our region and listening to him talking about his vision for the future, it reminded me that even with great processes, it still takes a really great leader to make an organisation outstanding. I guess that everyone has an opinion about what makes a great leader but I'll try and share my thoughts in without making it too dry.

It goes without saying that Philip is an exceptional rider.  Listening to his helmet to helmet commentary, describing what he is seeing all around him (situational awareness) and how the observations are impacting on his riding decisions borders on the unbelievable.  Fast or slow, his riding looks absolutely sublime and effortless.  His riding alone commands respect but there are other advanced riders in the organisation who come close too.  However, there are also additional qualities which combine to make Philip a true leader.  One key aspect is his humility and complete lack of ego. It's such a powerful and inspirational quality that it completely permeates the IAM culture and is embraced and reinforced by the membership.  Add Philip's vision for the organisation, an unrelenting passion for excellence, making sure that individual members have every opportunity to contribute and flourish and you start to get an inkling about what makes a true leader as opposed to a good manager.

There was a recent article in a national newspaper regarding a survey about why people leave their jobs.  As you might expect, the reasons were quite varied but there was a strong undercurrent of feeling undervalued by their manager having a major impact, irrespective of remuneration or other working conditions.  In my whole working life prior to retirement, both in academia and industry; I have worked for some good bosses as well as some truly awful ones.  However, in all those decades; I have only worked directly for two people who could be described as true leaders.

The first was my Head of Department at Cranfield University, who passed away many years ago.  Incredibly intelligent with a love of the good life, he had a bit of an ego but it was never at the expense of his team.  Consequently, it was looked on more as an eccentricity than a shortcoming.  He could be an irascible old bugger but irrespective of status, everyone in the department was treated the same and certainly got to know when they fell short of his expectations.  He also had the knack of sweeping everyone along with his drive and vision for the future and pushing people to achieve the near-impossible.  In my case, his influence lead me in a direction that I could not have envisioned and it had a direct impact which continued for a couple of decades both in the UK and NZ.  It's probably fair to say that John was not loved but hugely admired for his abilities.  He didn't really fit the conventional definition of a "people person" in an obvious way but he quietly cared about his staff and made sure that we were all challenged but supported at the same time.

The last is John White, who became my boss at the pulp and paper manufacturer I worked for until retirement.  Since retirement, John and I have remained friends so I'd better choose my words carefully!  Before working for John, I got to know him through a company-wide quality systems project I was implementing and we got on well.  We also rode bikes together on the odd occasion.  He rode motorcycles in his university days but then out of the blue on a business trip to Japan, he bought a Honda CB1000 "Big One" with all the performance extras and had it shipped back to NZ on one of the vessels which carried our products!

Sometime later, he "poached" me from the department I ran to introduce good technical systems into his own particular sphere of influence. From my perspective, John had a number of qualities which when put together made an exceptional leader.  He was a brilliant innovator but didn't have much time for detail.  That's why he assembled a team with diverse skills.  When he came up with a concept, he'd get the appropriate person in his team to look at the practicalities and if it was a flyer, he'd back them all the way with the resources and time to do the job.  No micro-managing from John - if you'd earned his trust, it was support all the way.  He was very aware of his strengths but also things other people were better at than him, hence building a team with diverse skills.  He had strong personal integrity, was very approachable and open which meant that discussions were extremely productive.  From time to time, employee satisfaction and performance reviews were conducted by an external agency across the company.  It was no surprise that our team came out on top and it could be directly linked to John's inspirational leadership and our respect for him.

In more recent years, John has taken up cycling.  More specifically, mountain bike endurance riding.  Clearly, his focus and determination from business has transferred to his cycling prowess as twice, he has won his age group at the World 24 hour solo endurance championships (WEMBO) and is off to Italy to defend his title in June.  If that's not inspirational, I don't know what is.  There's a case of wine riding on a good result in Italy! 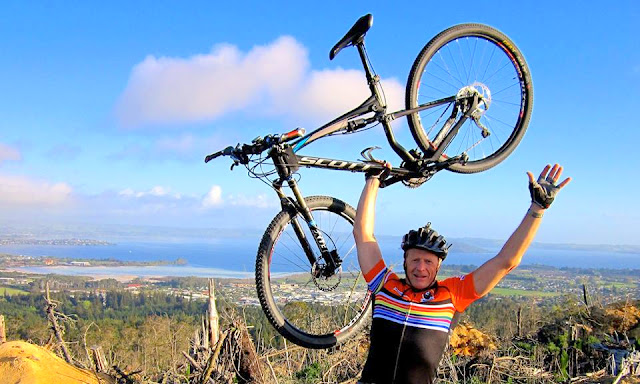 There are lots of books on leadership and this post hasn't been about adding anything insightful about the key qualities of leadership.  What I've tried to do however, is to show from a personal viewpoint how inspirational people can positively affect the lives of others, very much for the better and help us to lift our own game.  The news is full of so-called leaders from the world of politics, commerce and everything else under the sun making all sorts of nonsensical utterances which add bugger-all value to anything or anyone.  My view is that the title "Leader", is not one to be automatically conferred.  It has to be earned through deeds and respect.

Back to motorcycles next time!
Posted by Geoff James at 11:51