A slight problem and a bit of innovation

The phrase "silly bugger" isn't one that springs to mind as an endearment from one's lifetime love although most males the world over would have been on the receiving end of similar words at one time or another.  However, in this instance, I must agree that Jennie's words were well-chosen.

Last week, I was getting ready to waterblast the top of our neighbour's driveway as it gets mossy and slippery with the absence of winter sun. I retrieved the waterblaster from the workshop and squeezed past the rear of our 4x4.  In a moment of stupid inattention, my calf connected with some force on the end of the towbar.  When I could speak again, the air turned blue.

I knew I was in trouble when the leg began to swell with a big haematoma starting to appear.  Having had an internal leg bleed a few years ago, it was straight into the RICE routine with an ice pack and sitting on the settee with my leg up.

The next few days were purgatory, not being able to do much - can't abide sitting about and I always seemed to be in Jennie's way.  The pain wasn't too bad but the swelling made things a bit stiff, especially with the technicolour bruising starting to come out. 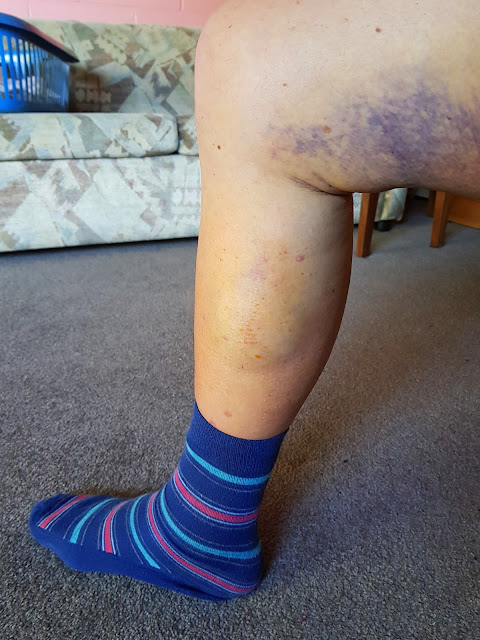 As per the Joni Mitchell lyrics "You don't know what you've got until it's gone....", not being out on two wheels or doing anything else productive was causing some intense frustration bordering on depression in the darker moments as the weather has been pretty good.  As I'd already had to cancel some ride coaching and with August and September looking as busy as heck, getting back on the bike was a priority.  More well-chosen words from Jennie but when you're passionate about something......

Gingerly getting on the bike for an experimental sit went fine.  A bit of stiffness getting my foot on the peg but relatively comfortable.  However, the real worry was accidentally knocking the haematoma and making making the damage a whole lot worse. What to do?  Some form of good protection was needed, with various ideas being considered and rejected.  The degree of eye-rolling by one's wife is a good litmus test of practicality.  Then bingo!  Went rummaging in the closet for an old riding jacket and pulled the CE elbow armour from one of the sleeves.  An absolutely perfect fit over my calf and only minor eye-rolling from the boss.  How about this....... 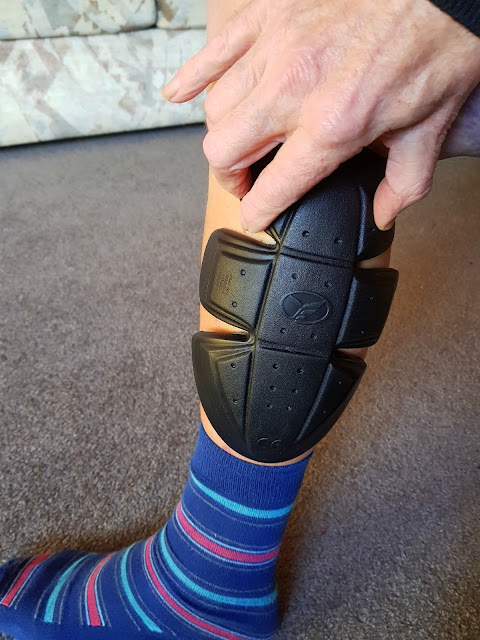 Made for the job!

The question of securing it in place still needed resolving.  Direct taping to the leg wasn't a good option as the screams from pulling duct tape off a hairy leg would be heard in the next town.  Solution - tape it to a pair of long johns!  With the problem solved, it was time to kit up and give it a try.  I must admit that I was quite apprehensive for a while and my riding wasn't particularly fluid for the first 20 minutes or so.  After that, muscle memory overtook the apprehension and enjoying the beautiful sunny day along the coast road became the overriding emotion.

Parking up for a few minutes after around 40 minutes of riding, it was a pleasant surprise to find that I hadn't stiffened up and wasn't in any real discomfort - awesome!  Same at the end of the ride home. 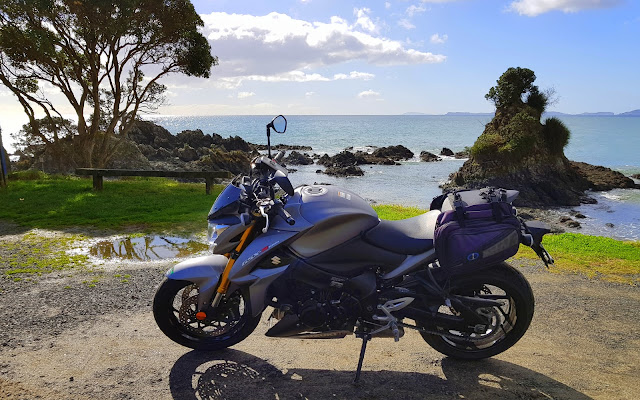 Bike, sun and sparkling water - doesn't get much better than this 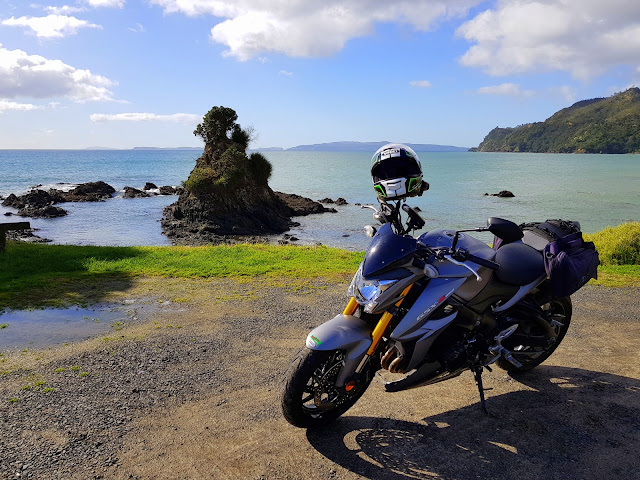 Not another person in sight!

Jennie thinks I'm stupid to be riding so soon and she may have a point.  However, it raises an interesting question about the positive impact of mental well-being on physical recovery as long as it's not taken to extremes.  The ride certainly lifted my mental state.  On the other hand, ageing does have an effect on the rate that the body heals so maybe over the next year, it will be time to retire from IAM and just do some social riding on a different sort of bike.  At least I've got a fall-back position in terms of our boat and travel to keep occupied if I cut down or stop altogether.

To finish on a different note, regular readers will have seen various tyre end of life reviews on this blog.  The Suzuki came equipped with Japanese-developed 50 profile Dunlop D214 Sportmax pure sport tyres.  Horrible things.  Grip was ok in hot, dry conditions but in cooler conditions or in the wet they were lethal.  At the most sensitive traction control setting, the TC light was always coming on in corners, even in the dry.  The rear tyre only lasted 3700 km and it was a relief to replace them.  Many owners went for one of the big brand sport touring tyres to get more life and 55 profile to get a better rate of turn-in and a larger contact patch when leaned over.

The anticipated gains were achieved and the traction control light rarely, if ever comes on.  It bothered me a bit in case going to a different profile tyre had inadvertently affected the TC calibration so belatedly, I recently emailed Suzuki NZ to query the effect.  They responded quite quickly saying that tyre profile made no difference as the traction control had a self-checking function every time the ignition was turned on.  This confirms that the 55 profile sport touring tyres which many riders fitted do give better grip.  However, at the end of the reply from Suzuki, they gave the standard "corporate-speak" (or arse-covering if you prefer) caution about the adverse impact of fitting non-standard tyres.  I don't really have too much of an issue with them doing this for legal reasons but is supplying a new bike from a Japan with a set of tyres (D214's) which are manifestly "unfit for purpose" in many parts of the world where weather conditions are so variable a less responsible thing to do?   I did email back politely querying this and predictably didn't get a response as it's a difficult topic bound up with corporate supply policies.  I suppose that the moral of the story is to do as much research as you're able with respect to tyre choices as you won't necessarily get the full story from your bike or tyre supplier.

This doesn't mean that Suzuki NZ are by any means deaf to their customers.  Readers may remember that when I first got the bike, it snatched badly at low throttle openings.  When I got in touch about the problem, Suzuki replaced the ECU with another type at their cost which solved the problem.  They even offered to let me have a trackday ride on the GSX-S 1000 race bike which they prepared for visiting US journalist Don Canet.  As generous as the offer was, that was a bridge too far for me!


Addendum:
A 400 km outing today to take a rider out for his Roadcraft Advanced Test.  The rider passed and I completed the ride pretty comfortably with the armour protection in place.  Need to take sensible precautions but yayyyyyy....... I can ride again! 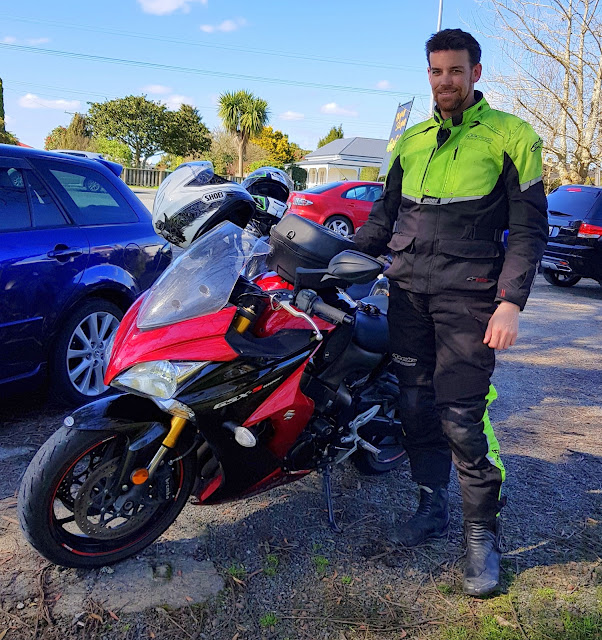 A smiling Blair, who passed his Advanced Test today!