An idiot and a Porsche

Our daughter-in-law's mother sadly passed away recently.  As part of the estate settlement, I have just been asked to collect her car not far from where we live and drive it on the weekend to Auckland for eventual sale.

I'd better come clean at this stage and admit that this vehicle is no shopping basket - it's a Porsche Carrera Cabriolet 4S.  Three litre, twin turbo pumping out well over 400 horses with active suspension and all-wheel drive to put all that power onto the road.  Dead keen to have a decent drive of a genuine supercar with less than 5000 km on the clock!

Jennie drove me to the place where it was stored to pick up the keys.  This is where trying to be Mr. Cool was about to descend into pure farce.  No-one there to tell me the basics but what could possibly go wrong?  My Toyota 4x4 has a key.  You know, one of those things with a plastic bit you grip, with a jagged bit of metal out front which you stick into a slot, turn and the engine goes brmmmmm.  Jennie's Honda is keyless and all you have to do is keep the thing that looks like a garage door opener somewhere on your person and press the button on the dash marked "Start".  It then goes brmmmmmm.

This is one of the few times where education or accumulated life experience counted for bugger-all or pretty close to it. Not a good feeling!

This is what I got given: 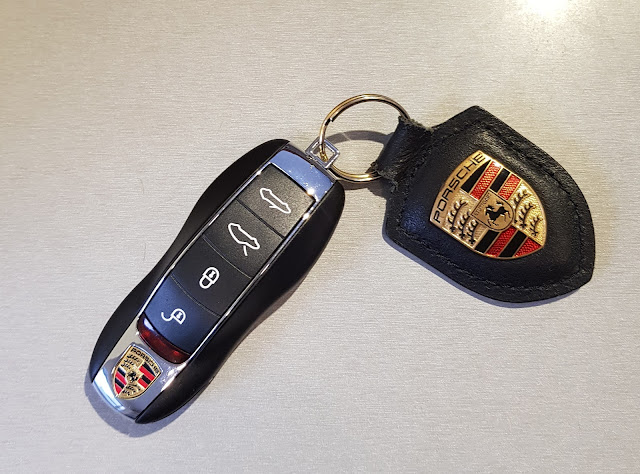 Yep,   recognise those symbols (I think)!

Even a plonker like me can recognise the unlock symbol so that's what I pressed. Pulling the door open, I was greeted by the driver's seat automatically sliding into some predetermined position which was a "wee bit" different from my anatomical requirements.  The first intelligence test was to adjust the seat and I was found wanting.  After finding the controls, of which there were multiple unmarked options, I stuffed about with limited success.  Aware that as well as Jennie, others might be surreptitiously watching my lack of progress, so about 75% right was good enough after what felt like hours but was probably only a couple of minutes.

The next humiliation was trying to start it.  Clearly, the device was some sort of keyless sensor like Jennie's but where the hell was the start button?  The Porsche has instrumentation to rival the Concorde flight deck and scanning the dashboard gave absolutely no clue.  Visions of having to ring a Porsche dealer... "Hello, I'm not the owner but can you tell me how to start this expensive car I'm trying to drive off in?"  Shortly followed by red and blues with batons and pepper spray.  By this time, Jennie was anxious to abandon me and disappear home in her car.  Desperation was setting in and then I noticed an indentation in the dash, roughly where a normal ignition barrel is.  An experimental poke with my finger and a cover slid aside.  Bingo, the "key thingy" is clearly meant to fit in it.  Just like you see in the movies where the human discovers an alien starship and can't resist sticking things in holes and you know it's probably not going to end well.  I felt much the same. 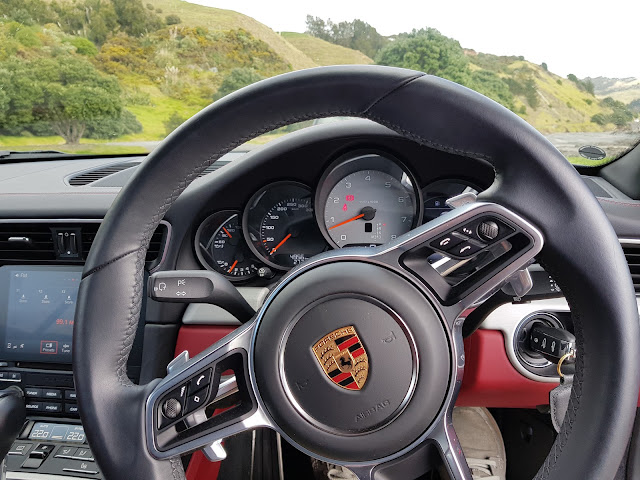 Just a small fraction of the instrumentation

Give it a turn and the instruments light up but no engine - bloody hell - what now?  Then I notice some words on one of the instruments that says "put your foot on the brake" or words to that effect.  Followed the instruction and Hallelujah - engine rumbles into life! Humiliation is not quite complete however - where the hell is the handbrake?  Not a lever to be seen but after a minute or so, I notice a small switch near my right knee which has a red LED glowing away.  Aha!  an electro-mechanical parking brake.  Snick it into reverse and we gently move backwards, ready to make the 40 minute journey home.

I prefer an understated colour scheme, not wanting to draw attention to myself and this one is the polar opposite with contrasting red mags, black bodywork and a red convertible top.  Sticks out a mile in rural Coromandel and could attract unwanted attention.

It seems an eternity since first opening the car door but it's probably closer to 15 minutes.  Pulling out onto the public roads, I'm aware just how wide this beast is at the rear wheels as the flared wheel arches fill half the wing mirrors.  The driver's internal mirror isn't brilliant either as the rear window is so acutely angled that it's like looking through a 20cm wide slot.  On the Suzuki, I'm doing mirror checks every few seconds, backed up with lifesavers (shoulder checks) where appropriate.  The comparative lack of rear vision on the Porsche is really unsettling.

Several of the instrument clusters seem to have a dual purpose.  One reminds you about seatbelts and other things when stationary but shows turbo boost and various other pressures and temperatures when rolling.  Far better to just look where you're going than getting distracted. 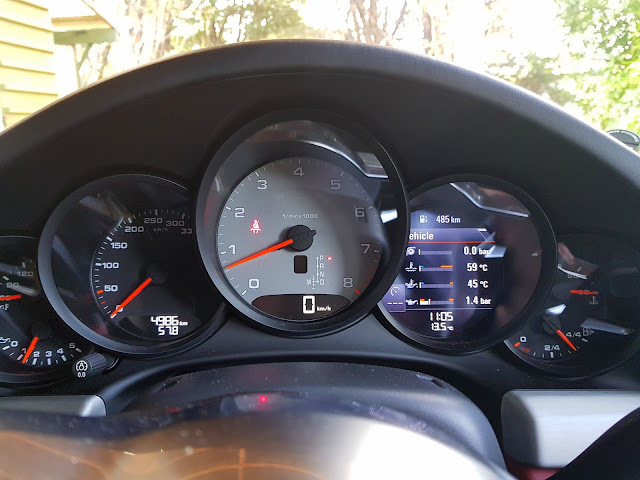 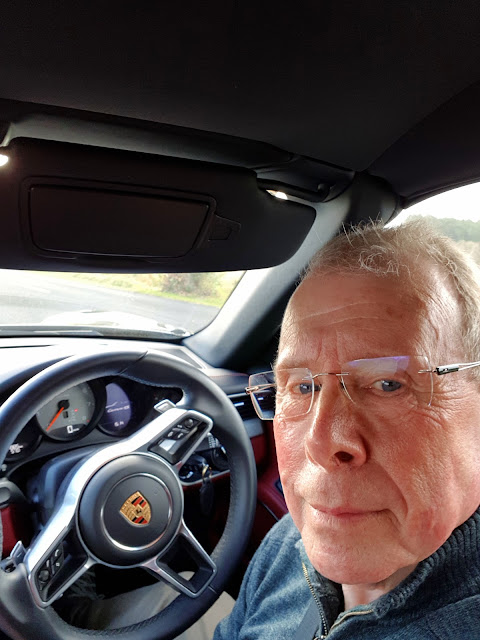 Driving like a nana through town to get a feel for it, I'm acutely conscious that I'm driving a car that cost well over NZ$200,000 and don't want to ding it or worse.  Clearing town, I pull over by the sea to reset my mental calibration.  I find this works if I'm not riding the bike particularly well.  Here's the Porsche Carrera. 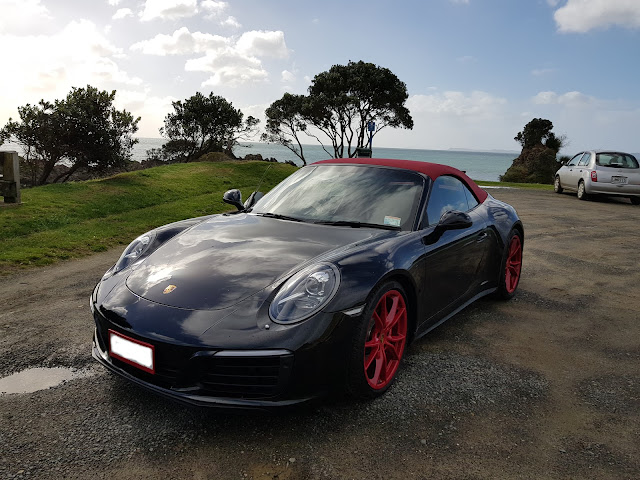 Not to my taste but looks the part

Very little traffic on the road so a bit more throttle is used through the twisties.  The all-wheel drive coupled with active suspension makes it eat the corners but can't help thinking that it removes driver "feel".  It actually feels quite sterile and uninvolving which is a complete surprise.  Price of progress I guess in making things safer for drivers who aren't particularly skilled.  Earlier models of Porsche had a reputation for biting the heavy-handed.  I leave the gearbox in auto mode rather than manual and use the paddles for cornering and the odd overtake.  Crikey, this mother picks up her skirts and flies when those twin turbos start to spool up! In no time, we're back in our village, hoping no-one will recognise me in a place where mud-splattered 4x4's and utes are the most common form of transport.

Parking it in a space under our front decking, all sorts of anti-collision sensors are chiming away and flashing various colours on the camera LCD display, warning of impending doom.  Personally, I find it a distraction and prefer to use my eyes, questionable visibility notwithstanding. 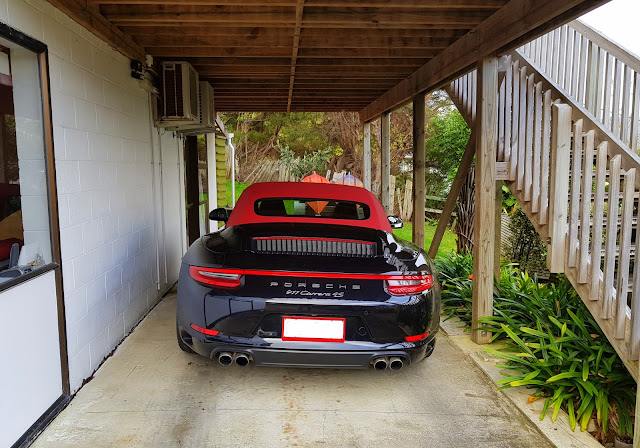 Just one more humiliation awaits me before calling it quits for the evening.  Being uncertain about fuel consumption, I'd better find out how to fill the thing up if need be on the trip to Auckland in a few days.  Hunt as I may, simply can't find the filler cap release.  Just about to give up and go on the internet for info when I give the cap a little push and it pops open!  The car has to be unlocked before it will activate.  Duhhhh......

We now have to face the weekend delivery drive to Auckland.  A couple of my mates are Highway Patrol officers up that way and I pray that they don't recognise me.  You know what mates are like....

So there we are.....  an interesting day or two, a few laughs at my expense, enjoyed the experience of driving the beast but didn't enjoy the attention it garners.   Last thing you'd want is to get it coined or worse. Would I want one?  Not on your life.  Apart from the frightening cost of owning one, everyone on the road would hate me, thinking "Old geezer trying to re-live his youth, 25 year old mistress tucked away somewhere".  Now if I had a 70's American muscle car like a Boss Mustang or a Charger, the vibes would be entirely different.  Wouldn't even care if they thought that I had a 25 year old mistress!  Ditto for an E-type or Austin Healy 3000.  If pressed for a modern supercar with a bit of class, it would have to be an Aston Martin or a GT40 replica.  I'll stick to bikes for performance thanks!

Addendum:  Well, the Porsche was safely delivered to Auckland.  Nothing remarkable about the drive as it's not a car that gets the driver involved, at least at sane highway speeds.  However, there was one more surprise waiting.  I exited the motorway off-ramp close to our son and daughter-in-law's place and cruised down to the traffic lights at the end of the ramp.  After sitting there for a few moments, the engine stopped dead with a moment's panic on my behalf.  Check the fuel gauge - fine.  Quick scan of the instrumentation - fine.  Oh Lord - what now?  Move foot partially off the brake and it re-starts with no input from me.  Aha - so it's one of those auto-stop engines which saves on fuel!  If it had been a genuine malfunction, I'd bet good money that most motorists would enjoy the spectacle of a Porsche being pushed out of the way rather than coming to the aid of the driver!  Amazing how quickly the panic levels rise when something happens that you're not expecting.  An interesting experience to report on but in no hurry to repeat it.  Anyone want a GT 40 or a Boss Mustang delivering? 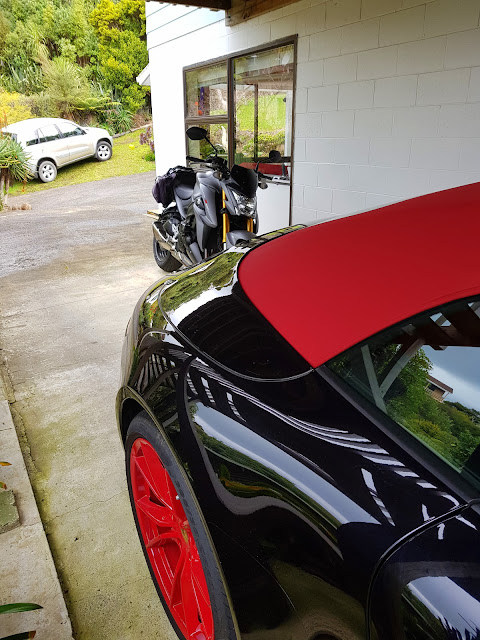 The Suzuki at the back - similar performance for under NZ$20,000