In Praise of Dog Turds!

I've had a few punctures during my motorcycling career but in all that time, most of them have been slow(ish) leaks where I've been able ride to a safe point to properly address the problem.  Just 4 months ago I made a post about a puncture I got less than an hour from home.  Even though the leak was quite serious, carrying an electric pump got me home with multiple stops.  I've never actually had to use any of the repair kits I've carried over the years........ UNTIL NOW!

On Sunday, I was out on an IAM coaching ride with my colleague Drew in the central north island, some 170 km from home.  He was riding a Honda ST1300 and I wanted to see how he handled tight, narrow country roads with lots of elevation changes and blind bends.  East of the town of Cambridge and a long way from anywhere is a really challenging bit of road called French Pass.  We were both making good progress but when I followed him round one bend, the handling felt slightly spongy.  Wondered if it was my imagination but the next corner was worse, so called over the comms for Drew to pull over in a safe spot whilst I checked what was happening.  He stopped in a farm gateway and almost as soon as we stopped, the owner of the property came out to see if he could help.  As well as the farm, Chris ran a local mechanical maintenance business and offered his workshop so that we could do a proper inspection.

Sure enough, something long and sharp had entered the tyre but there was no sign of it.  My screw-in and snap-off Gryyp plugs weren't going to be big enough so it was time to try the euphemistically-called dog turds.  I can see where the name comes from, even though they are Chihuahua - sized!  For the uninitiated, this is the dog turd kit: 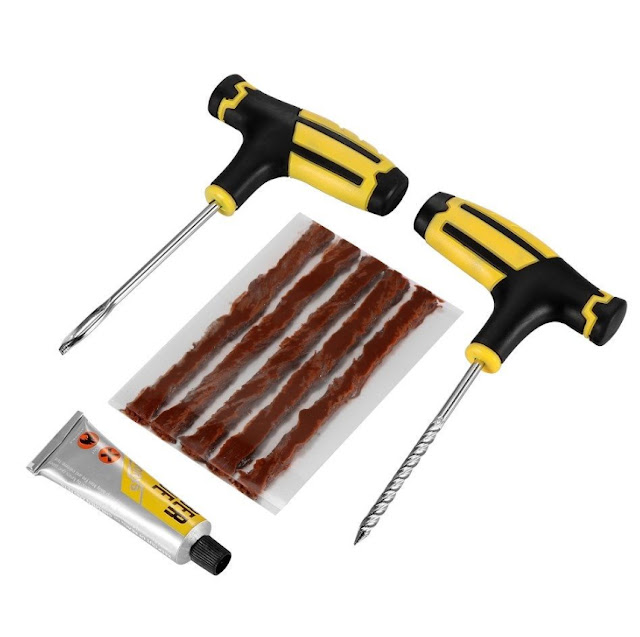 The turds are comprised of a fibre rope impregnated with a sticky substance.  The rope gets doubled over and pushed through the puncture with an awl and the sticking out ends trimmed off.  My kit didn't have adhesive with it, just relying on stickiness and friction.

Using Chris's industrial compressor rather than my portable one, the tyre was inflated and after thanking Chris and his wife profusely, we set off again - RESULT!  Unfortunately, my optimism was short-lived as half an hour later, coming into the small town where we were due to finish the training ride, down went the tyre again!  The looped plug had clearly come out.  The turds were at least 10 years old and I suspect the principal reason was that they had lost a fair bit of stickiness.  Fortunately for a Sunday, a local auto accessories place was open and Drew rode round and got me some new super-sticky ones. 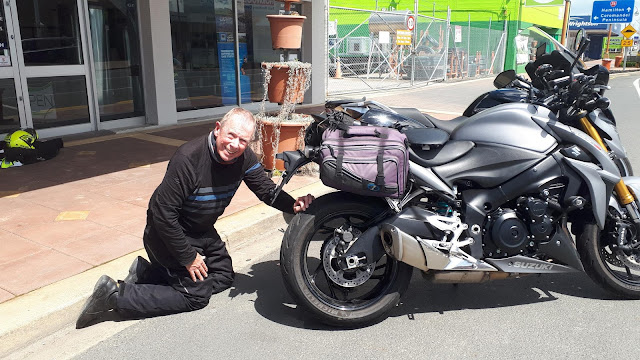 Chopping off the ends, a bit of spit was applied to see if there was any leak from the puncture - there wasn't! 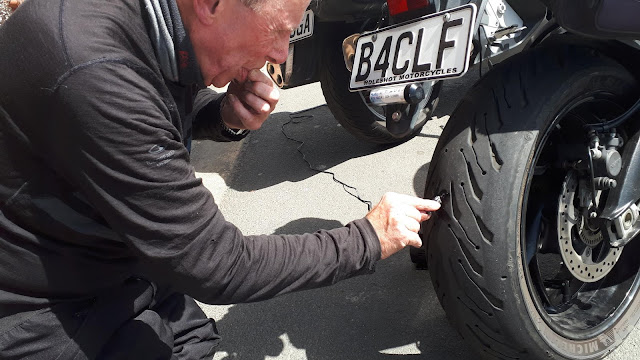 Soon after, Drew went on his way home to the Bay of Plenty and I headed north towards home in Coromandel.  Unfortunately, about 20 km up the road, the same thing happened again.  A closer inspection indicated that one dog turd probably wasn't adequate so I rammed 2 in and added one of the Gryyp plastic snap-off screws to lock everything in place.  I was lucky to inflate it to the proper pressure as my ancient inflator failed just as I reached the right pressure.  I did have a short bicycle pump in the bag but using it would have been moving into heart attack territory.  Given my previous lack of repair success and the fact that it was getting late in the afternoon, I didn't want to be stranded miles from anywhere on the Coromandel Peninsula (aka Deliverance/banjo country).  A couple of quick phone calls and I arranged to leave the bike at an IAM friend's place just short of the Peninsula and Jennie would pick me up from there.  As it happened, this repair worked perfectly and I arrived at my mate's place with no loss of pressure.  Still wouldn't have risked it to get me all the way home though.

Quickly pulled the rear wheel to take it somewhere where it could either be repaired or replaced.  Hell, it's only 4000 km old and the one before that was only 2000 km old.  At this rate, I'll never be able to do an end-of-life evaluation of the Michelin Road 5!  I'd prefer to think it was sheer bad luck on my part than a design weakness in the tyre.  A parting shot by my mate Tony before I headed home with Jennie was him threatening to sell the bike on the NZ equivalent of eBay before I got back! 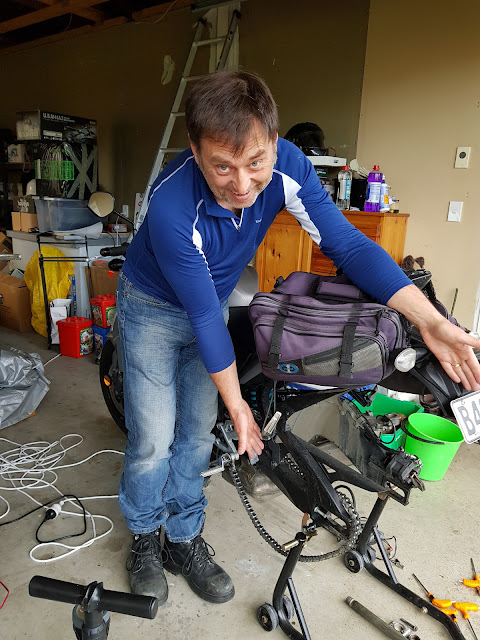 Tony, with his best "Have I got a deal for you" salesman's look!

I could probably have found a repair place a bit closer to where I live but this morning, headed on a 280 km round trip to south Auckland to one of my favourite tyre dealers as I knew that they had a new Road 5 tyre in stock if the belting was badly damaged.  Fortunately, I only needed a mushroom plug, not a new tyre which was a bright spot of good news with all the time-wasting.  Also took the opportunity to have a right-angled valve fitted to make life easier and bought some more Muc-Off bike cleaner (brilliant stuff), some Motul oil and a new filter so it turned out not to be a bad day. 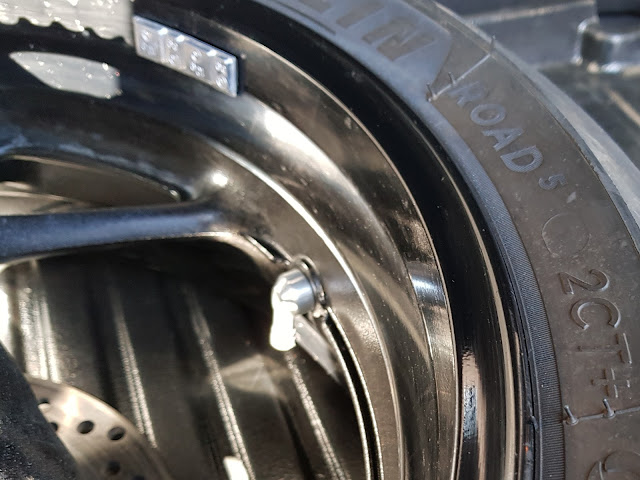 Tomorrow will see me returning to Tony's to re-fit the wheel and bring the bike home.  Oh, and a nice lunch on the way home as thanks to the long-suffering Jennie for ferrying me about!

There is an upside to this story though.  Getting practical experience of using dog turds was invaluable in case I ever need to use them in the future when help isn't readily at hand.  So many riders don't carry repair kits and it can be a bit more than inconvenient in some circumstances, especially a long way from anywhere with no cell coverage and no-one about.