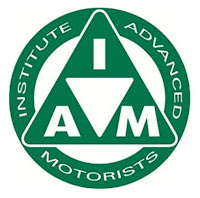 This year, the annual conference/AGM of IAM NZ (http://iam.org.nz/) was due to be held in Porirua, just north of Wellington.  Several of us from the central north island were keen to attend and fellow observing team member Tony suggested that we should turn it into a "long way down, even longer way back" tour.  Great plan and 4 of us gradually hatched a route covering some of the north island's iconic twisty bike roads.  The Green Badge Tour gets its name from the badge that's awarded when a rider passes the Advanced Police Roadcraft Test.  All 4 of us had passed that long ago and had also passed the Observer (mentor) test too.

This is a map of the route, covering some 2100 km of fabulous riding roads.  With the exception of the Wellington area, it was expected that traffic would be pretty light in late summer, especially keeping away from major arterial routes where possible and so it turned out to be. 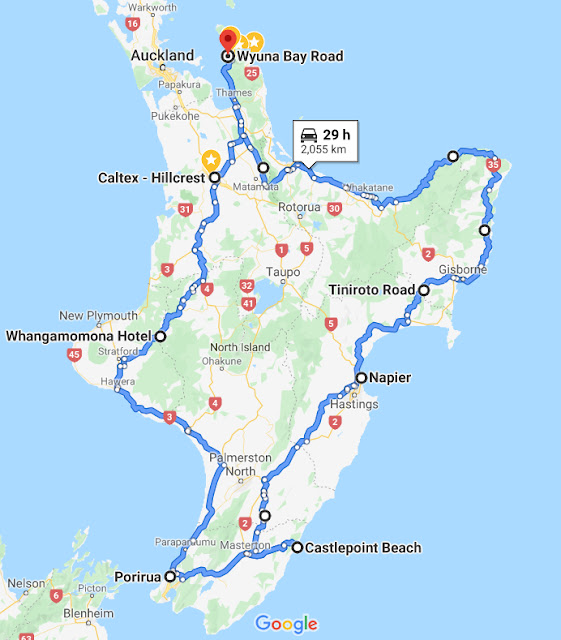 A route made in heaven

My 790 Duke isn't really set up for touring so travelling fairly light was the order of the day.  The regular small tailpack containing a few basic tools and puncture repair kit, with a 10 litre yachting dry bag strapped to it with a cargo net over the two.  I don't like wearing a back pack when riding but in this instance, I figured that I could put up with it. Loaded and ready for action

Setting off from Coromandel early in the morning,  I stopped 70 km further south to pick up Tony (Yamaha MT10 SP) and we then met up with Lloyd (Yamaha TDM 900) and Rex (BMW 1200 GS) in Hamilton.  The end point of Day 1 was the Whangamomona Hotel on the famous Forgotten World Highway, some 380 km from home.  The general arrangement was that we'd swap the lead at gas or coffee stops and all 4 of us were linked with SENA comms.  It was quite amusing that on the open sections of road with fast sweepers, there was a fair bit of comms traffic, mickey-taking and so on.  However, when we got to the technical tight stuff, it went pretty quiet over the air waves - just warnings from the lead bike about potential hazards.  Between Te Kuiti and the turn-off to Ohura,  we came on fresh road works - wet tar overlaid with fresh gravel.  We picked the tar-coated stones out of the various nooks and crannies later on but a 1% er on a noisy H-D had to stop by the roadside and pick them out of his drive belt before it got shredded.

First stop after lunch was Ohura.  A small settlement with a massive main street which was once a coal mining centre.  Current population is less than 150 and the settlement is in a state of genteel decline.  No-one was about and a wry comment was made that the locals must still be in their coffins during daylight hours. 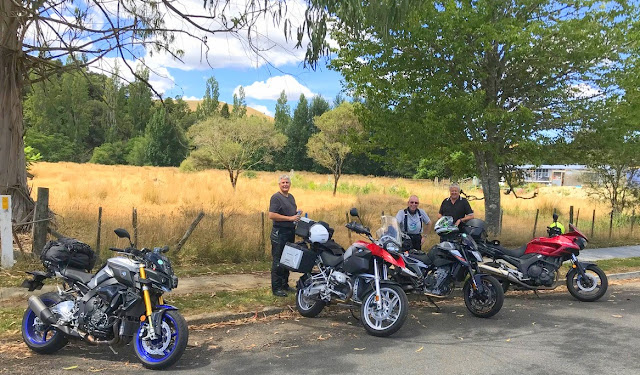 Rex, Geoff and Lloyd at Ohura.  A hot day and needing shade 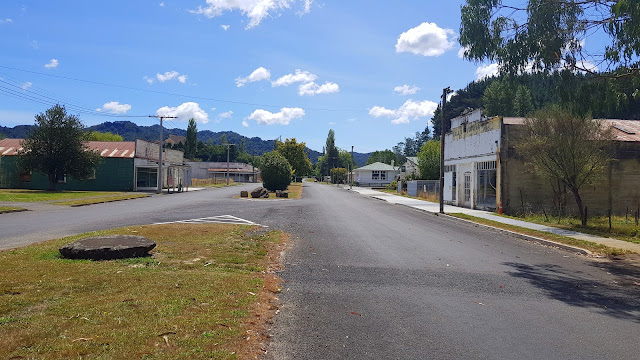 The busy metropolis of Ohura - locals still in their coffins 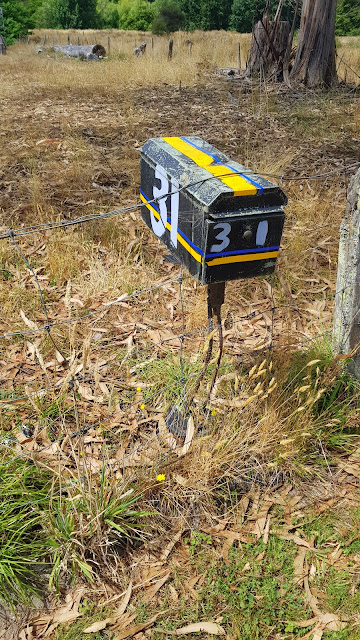 The Forgotten World Highway is something of a rite of passage for riders.  A twisty, narrow road with an indifferent surface at the bottom of a valley and over saddles with a section of gravel 15 km or so long.  The scenery is spectacular but it's wise to either stop and look or keep your eyes on the road if moving.  There's minimal cell phone reception and if you make a mistake, you're a long way from help.  It pays to hold a fair bit in reserve.  Tony shot a bit of video on the more open part of the Forgotten Highway which I'm leading on.  His MT10-SP with crossplane engine and uneven firing order sounds fantastic with the speaker volume turned up and on full screen:

Stopping at the Tahora Saddle, the active volcanoes of Ngaruhoe and Ruapehu were visible on the skyline. 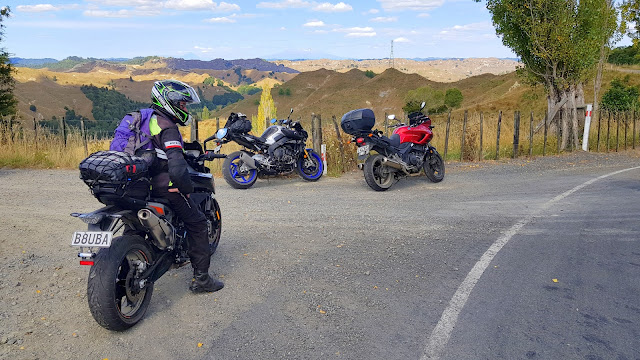 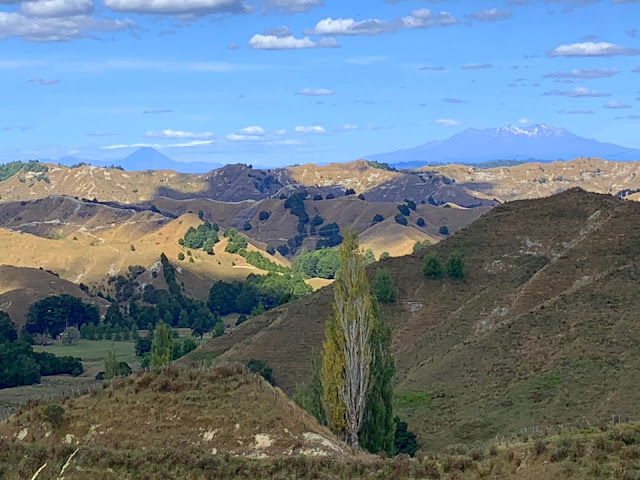 Tahora Saddle with active volcanoes in the background (photo: Lloyd) 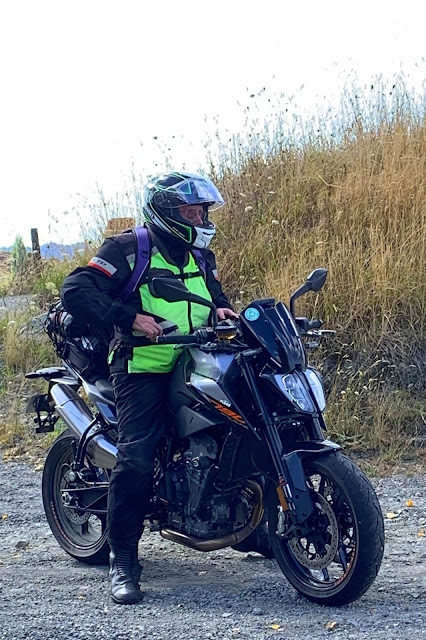 Yours truly at the Tahora Saddle (photo: Lloyd)

A quick photo stop at the Tangarakau river bridge.  The logs in the river show the power of nature when it rains! 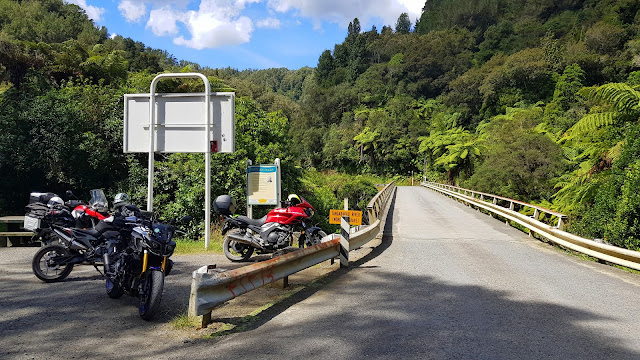 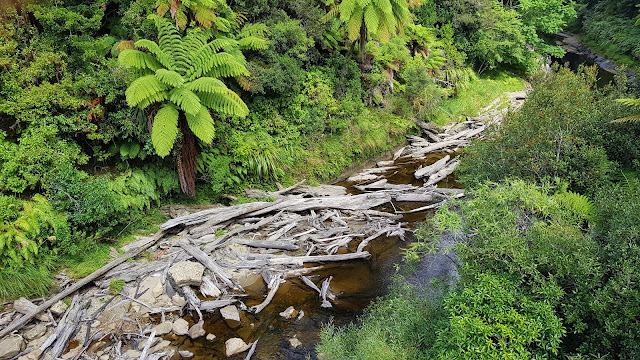 Logs in the river 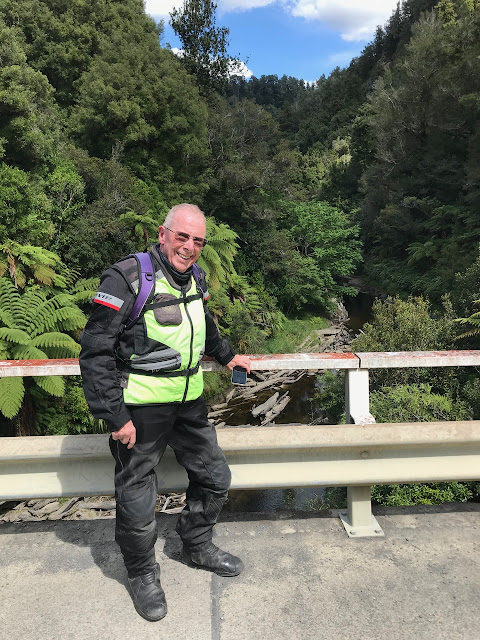 Before arriving at our destination for the night, a further stop at the entrance to the Moki Tunnel was warranted.  It was constructed in 1935/36 and is some 180 metres long - one direction at a time for traffic over a rutted surface.  We didn't see any wildlife on this occasion although on a previous trip, there was an extremely large feral billy goat with an impressive set of horns standing at the tunnel mouth. 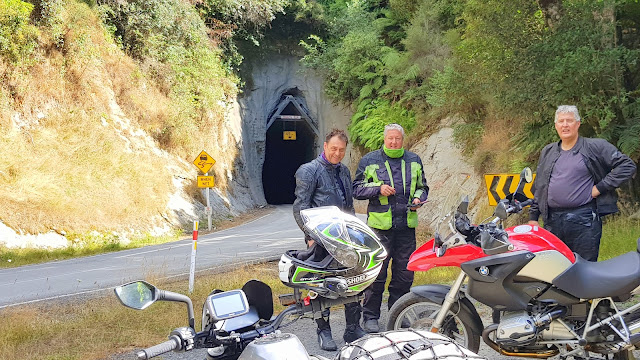 Tony, Lloyd and Rex at the Moki tunnel mouth

Arriving at the small settlement of Whangamomona late afternoon, we settled into the hotel and enjoyed a cold one as temperatures were in the early 30's C.  The place was fair jumping with locals and some South African contractors who were laying more reliable power lines to the settlement.  A most excellent feed was had later that evening. We asked the owner about leaving the bikes behind the hotel as per past practice but he hadn't got room this time and said they'd be perfectly safe outside.  Robyn, the lovely lady who lived next door agreed, apart from the possible risk from a local driver who had too many under his belt running into them .  She offered space at her place which we gratefully accepted.  Rural NZ'ers are awesome! 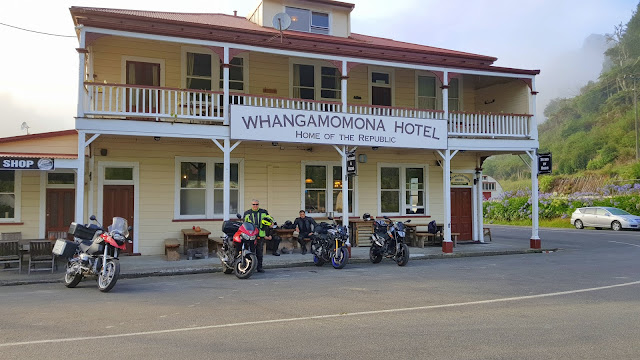 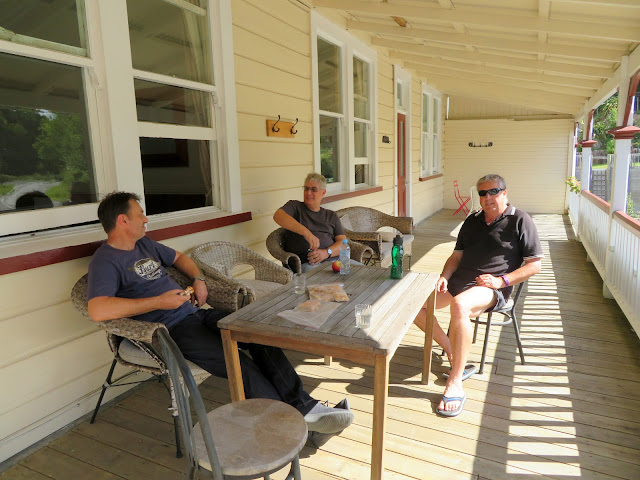 Chilling on the upper deck of the hotel - Tony, Rex and Lloyd 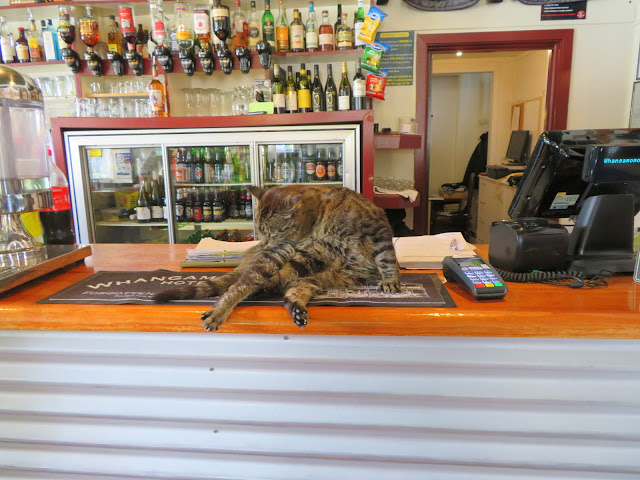 Hotel owner having a wash during a quiet spell

A walk to help dinner to go down was taken to get a few photos before it got dark.  Here's a selection. 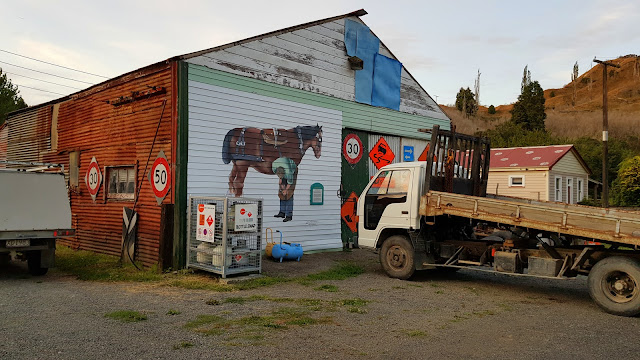 Colourful shed in the main street 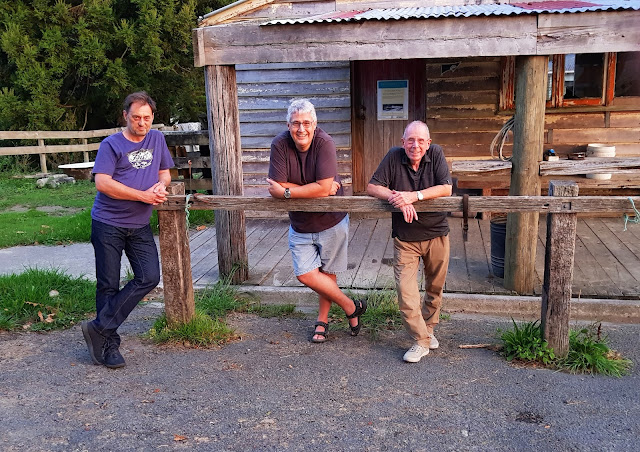 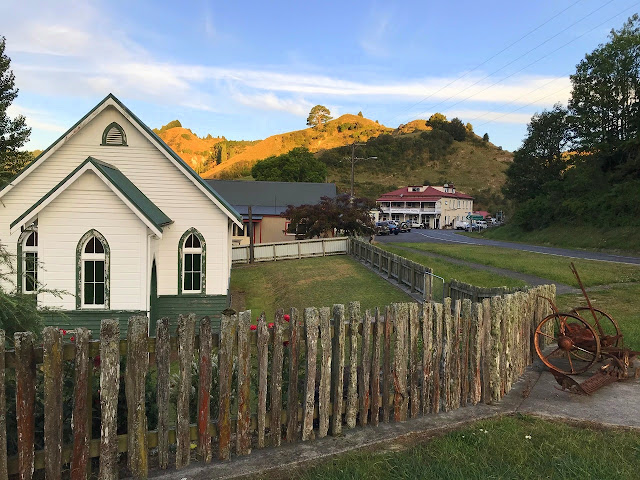 A wonderful day of riding, knowing exactly how your riding partners are going to react in any given situation.  Completely takes the stress out of group riding.  Another hot day forecast tomorrow for the ride down to Porirua.