Early breakfast at the Whangamomona Hotel and get packed.  The heat of yesterday has caused a bit of low-lying fog but we should break through that as we climb up the ridges and saddles.  The plan was to head west to Stratford and gas up.  By the time we get there, it will be close to 230 km since the last fill which means that Tony's MT10 SP will be down to the last litre or two.  After that, head to Whanganui and on to the conference destination of Porirua, just over 350 km away. 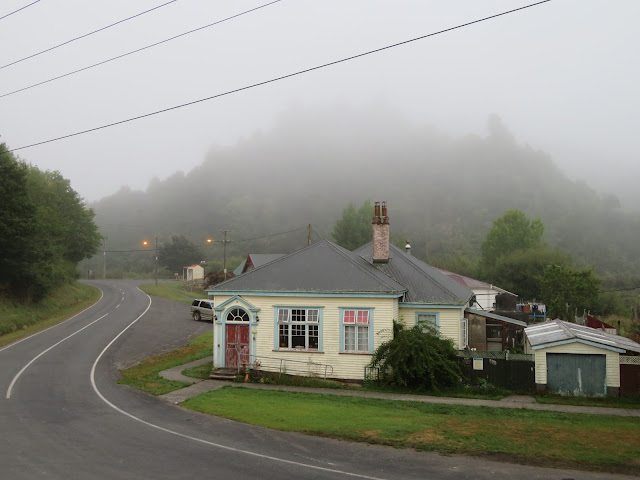 View from our balcony 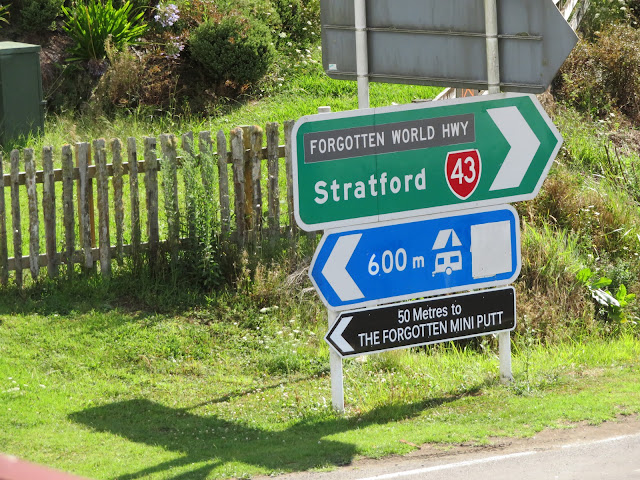 From Whangamomona to Stratford, the road surface improves markedly.  The road remains highly technical with twists and turns at varying altitudes.  Throw wandering cattle into the mix and there's no time to let the brain go into neutral!  In fact, the first cattle on the road were encountered a few minutes after leaving but having climbed out of the fog, there was sufficient time to scrub off speed.  Stopping at the Strathmore Saddle for a few minutes, there were some great views of the rugged country we were passing through. 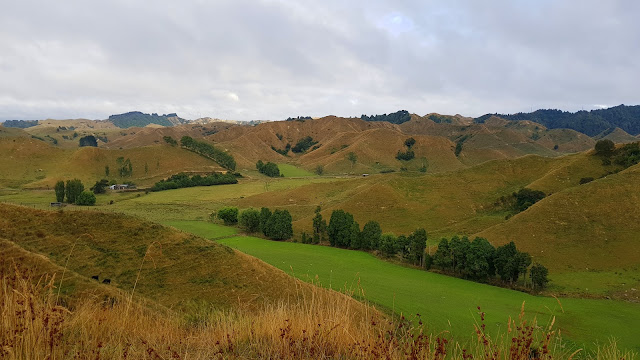 View from the Strathmore Saddle - not much flat land

A quick refuel in Stratford and then on to Whanganui for brunch.  The road along the south coast of the Taranaki province and down to Porirua is a major arterial route and relatively straight.  Fortunately, traffic was light so we could make reasonable progress without it getting too boring.  Our interest was kept up for a while by following a guy on a Moto Guzzi who was really putting himself at risk by following vehicles in front too closely.  Not only would he have had difficulty stopping if someone anchored up in front, his positioning meant that he couldn't see clearly for safe overtakes.  A really poor display of roadcraft.

I was the lead bike coming into Whanganui and at slow speed, Lloyd who was directly behind; could hear a lot of chain noise from my bike.  A quick check when we stopped for a bite to eat showed that it was drum tight and also a little dry from the gravel section of the Forgotten World Highway.  This was a puzzle as I'd checked the chain tension before leaving home.  The only thing I could think of was that I hadn't checked it with the touring load on the bike, even though the load wasn't particularly heavy.  The KTM swing arm geometry and suspension makes it somewhat trickier to set up than many other bikes and I was found wanting!

I wasn't carrying the big socket and torque wrench required to do a proper job so a quick internet search revealed a motorcycle repair shop not far away.  I called the owner who was initially reluctant to take the job on because he was so overloaded with work but then told me to bring the bike round.  This is an unashamed plug for Brian Thorley Motorcycle Repairs in Whanganui!  As soon as we arrived, he moved a bike off the hydraulic table and put mine on it.  There followed a series of adjustments for half an hour or so until he'd got it spot on, followed by a splash of lube.  Brian was a really nice guy who went out of his way to help despite his workload so I gave him $50.  He wouldn't have a bar of it and said I was welcome.  I didn't feel at all comfortable about his generosity and finally managed to press $20 on him for a few beers.  At the time of writing, I also have a motorcycle book on order for him (THIS) by way of a proper thank you.  A probable solution would have been for me to put a couple of clicks on the rear shock preload and I'll have to experiment when I have time.

The rest of the trip to Porirua was uneventful and we checked into a comfortable motel later that afternoon after spotting some local IAM riders heading north on an observed ride. 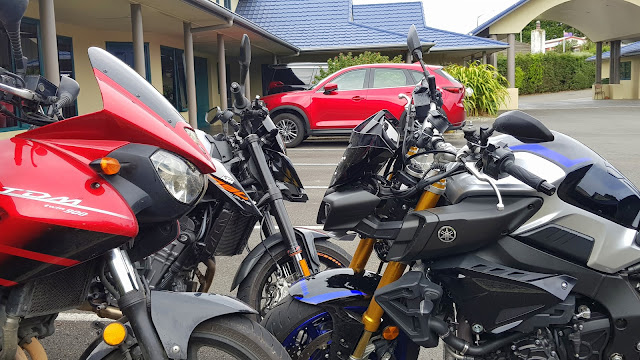 A gaggle of bikes at the motel

That evening, we met up at a local eatery with IAM motorcycle and car members from around the country and it was great to catch up with friends old and new.  Fellow central north island member and Senior Motorcycle Observer Rob happened to be travelling in his company vehicle so he was the designated sober driver - thanks a million mate!  The conference/AGM on the following day was a great event with something in it for everyone.  Some vehicles with the latest safety technology were available to test and I took a 2 litre Toyota Corolla with adaptive cruise control for a spin.  Pretty impressive with its autonomous braking technology and the next few years should see some real safety advances.  A conference dinner that evening, and then ready to resume the tour the next day.

The Wellington IAM team had arranged a series of rides on the Sunday for non-local members involving either road or gravel routes if they so wished.  We chose a ride over the Rimutaka mountain range to the coastal community of Castlepoint as that was the direction we were heading in anyway.  Unfortunately after fine hot weather so far, the forecast was for a front to pass through, delivering rain and wind!  Sure enough, the forecast was spot on and we all assembled at a local gas station in the appropriate gear. 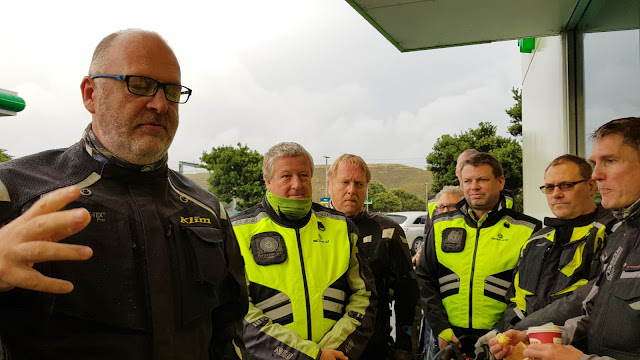 Looks like ride leader Paul is trying to summon the dry weather gods... or the Devil!

The plan was for the northbound groups to meet at the summit of the Rimutakas, then onto Carterton for coffee and then split into their respective routes.  Despite the rain, the twisty ride up to the summit was stress-free on account of a pretty grippy surface (lean sensitive rain mode traction control also helps!) although some of the wind gusts around bends needed a bit of vigilance. 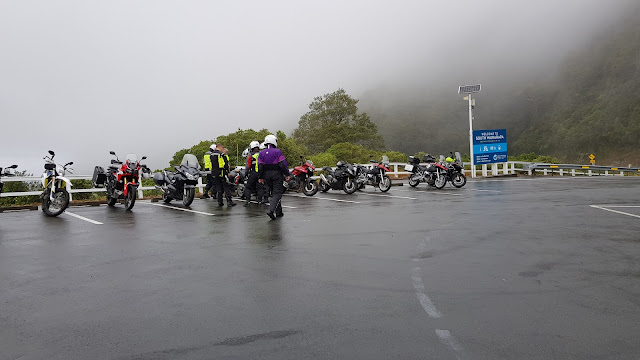 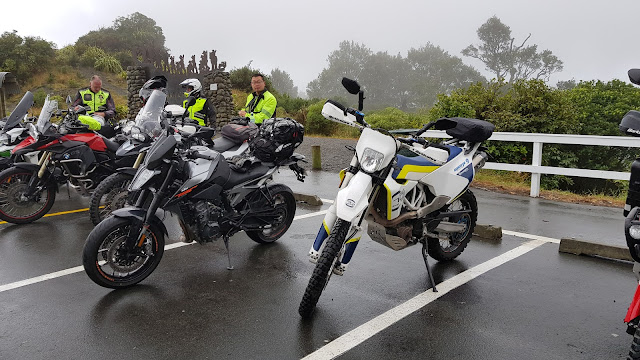 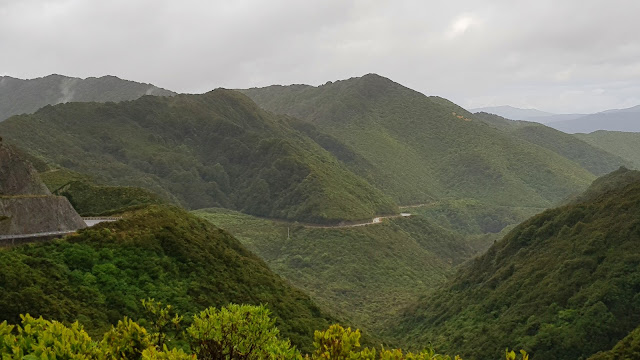 Looking back down the Rimutaka road we'd ridden up

A quick peruse of the local rain radar showed largely dry roads where we were heading with an improving forecast so wet weather gear could be shed at Carterton. 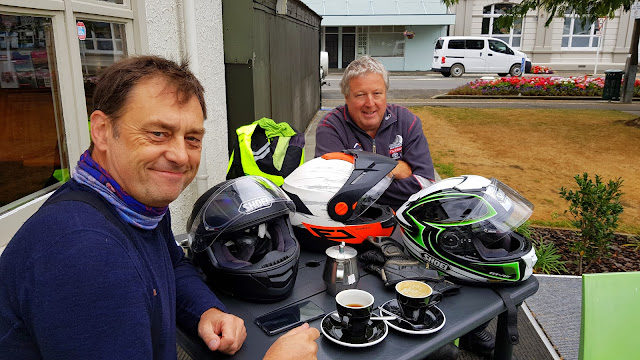 Satisfied smiles from Tony and Lloyd after great coffee in Carterton

Soon, it was time for the groups to head off in different directions and our group headed over to Castlepoint on the east coast in minimal traffic.  Sadly, Rex had to head directly home from here so we said our goodbyes and wished him a safe ride.  As an amusing aside, I found myself in the company of Mike, an ex-UK class 1 cop (cars and bikes) and now a serving officer in NZ with special national driving and riding police training responsibilities.  He's also Director of Testing for IAM.  Despite my own qualifications, it felt like I was back in primary school with Mike looking on and really had to concentrate on delivering a highly professional ride that he would look favourably on. In reality, Mike was probably taking no notice whatsoever, nice guy that he is.  I don't think I did anything too dumb.  A great road with a mixture of sweepers and tight stuff.

Some of us hadn't been to Castlepoint before and it was great to view the area in windy conditions. There's no safe berthing in the often rough conditions and the commercial fishing boats are launched and retrieved off the beach with weird and wonderful contraptions. 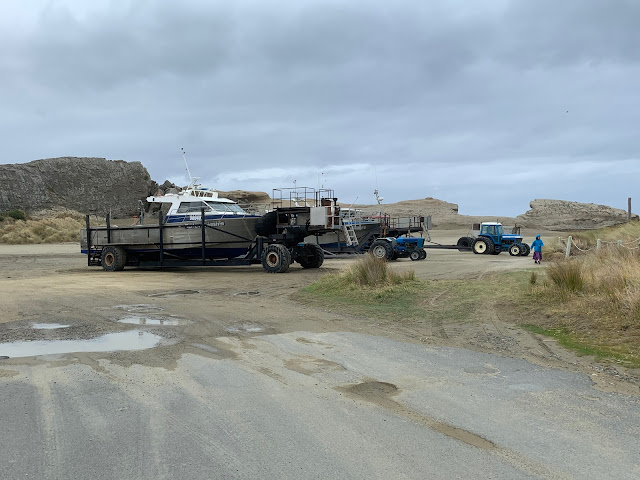 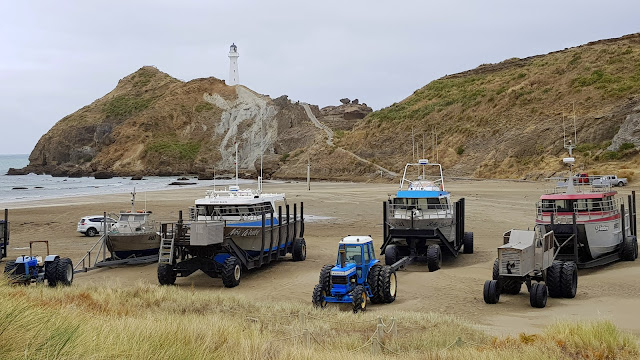 The lighthouse and fishing boats 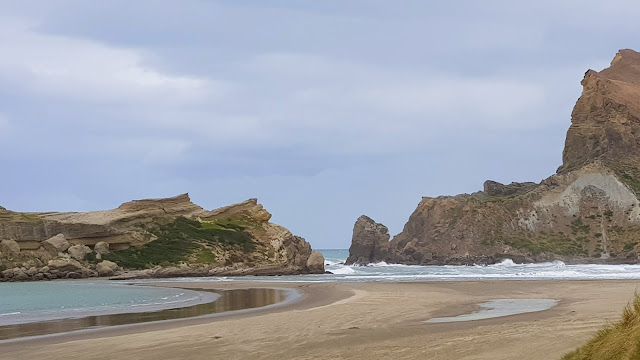 Peppered by flying sand whilst taking this photo


It was soon time to resume our journey northward.  Goodbyes were said to the IAM members from other parts of the country and special thanks to Paul and the Wellington team for such a special weekend - massively appreciated.   We needed to head back to Masterton first to refuel in readiness for the back roads to Napier - a little under 500 km since leaving Porirua first thing.   Tony's bike is good for around 250 km at a brisk(ish) pace, mine a little more and Lloyd's a lot more.  Sure enough, almost within sight of the gas station, Tony's bike ground to a halt.  A quick word over the comms and Lloyd and I carried on to the gas station.  Lloyd filled up a small soft drink bottle to return to Tony whilst I chatted to the attendant.  He was a really nice guy and gave me a complimentary coffee while I waited - great customer relationships!

Refuelling having been completed, we headed to Napier (the Art Deco capital of NZ) via the Wangaehu Valley (Thanks for the tip ANDREW)!  Virtually no traffic, spectacular scenery and technical roads, we were in paradise.  No time to take photos!  Arriving at our cabin in Napier's main camping ground, we were surprised to see lots of old vehicles.  We didn't realise that it was the annual Art Deco Festival weekend.  The town dresses up in period costume with lots of events and vehicles of a bygone age.  It was great chatting to the vehicle owners and it must be said that many of them were of a "certain vintage" too!  Here are some vehicle examples. 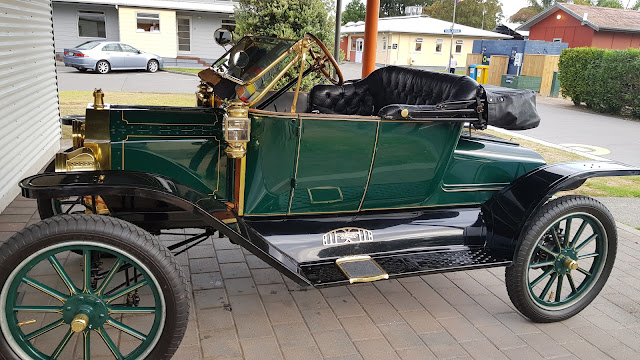 Not a speck of dust anywhere 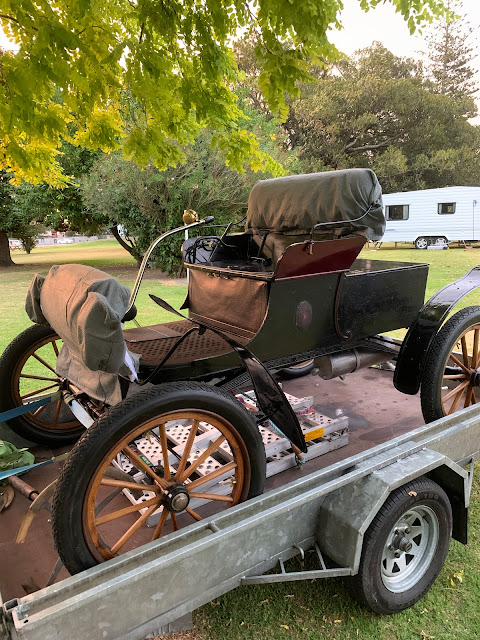 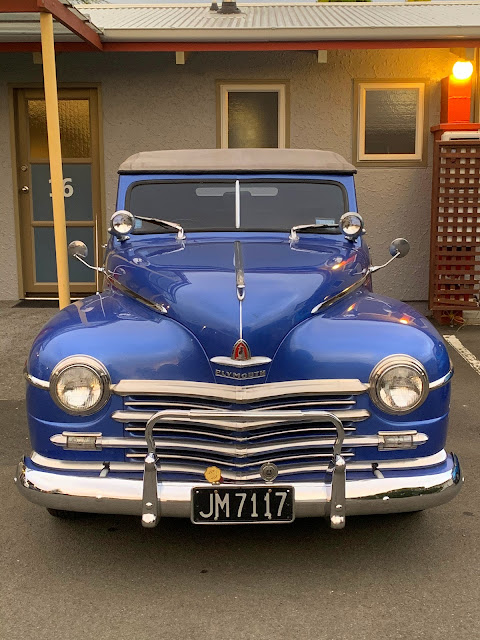 The days of chrome - Plymouth of uncertain vintage (photo: Lloyd)