An interesting day in the saddle!

I had my latest IAM check ride today (Thursday) and the day didn't start well!  The ride was to check my city skills in dense traffic so I made the 2 hour haul down to the city of Hamilton where my mentor, Wayne Holden lives. I've mentioned Wayne before - IAM Chief Examiner (cars), IAM Observer (bikes), ex-helicopter pilot and runs a highly successful driving and riding school.  With all those qualifications, it could be intimidating riding with him if he wasn't such a darned nice guy - really puts you at your ease.

Beautiful day, first day of the season wearing my leathers instead of Cordura, so why didn't the day start well, I hear you ask?  Well......  I committed the cardinal sin of fiddling about with something and not checking that it worked properly before an important occasion!  To be specific, I downloaded a software update the previous evening to the GPS.  I can ride to Hamilton with my eyes closed but needed the GPS to find the rendezvous with Wayne as knowledge of that particular suburb was virtually non-existant.  Kit up, leap on the bike, turn the GPS on and..........   bugger, it doesn't show any roads, just waypoints/POI's on an otherwise bare screen - no actual roads!  Darn it, will have to investigate when I get home.  Didn't think it would be a big deal  so set off for my first destination, the Triumph dealer in Hamilton where I bought the Triple from.  At least I knew where that was!  It's my birthday in mid-October and it was a good opportunity to look for a pair of new riding boots, which is my beloved's present to me (negotiated well in advance). 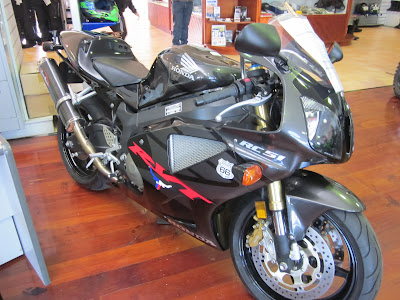 The RC 51 is virtually Honda's old V twin Superbike on the road.  Guzzles fuel like there's no tomorrow, will break the national speed limit in first gear, uncomfortable as hell and super-noisy carbon cans.  It's a gloriously insane bit of kit for the road, totally impractical and I'd have one in the shed tomorrow as a second or third bike! 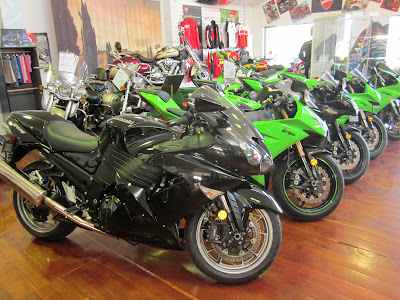 The wicked Kawasaki 1400 in Badass Black 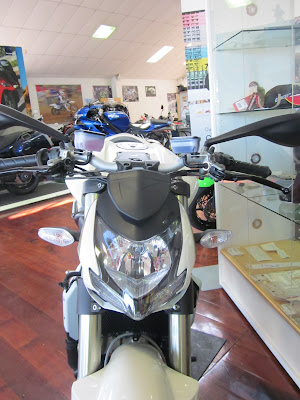 How about this view in your mirror?
Ducati Streetfighter 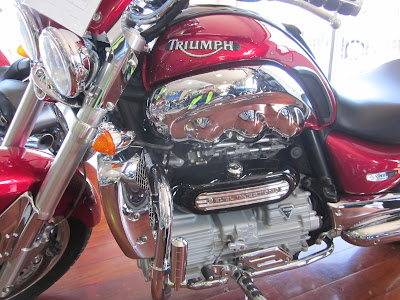 Chrome and more chrome - Supersize Me, the Rocket 3 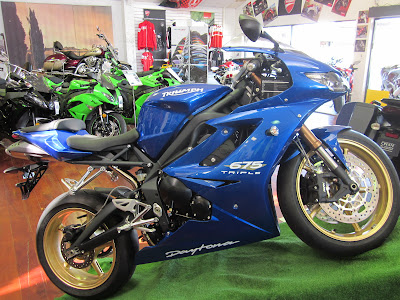 After half an hour's drooling, attention turned to looking for a new pair of boots.  My SIDI's are 8 years old and were totally waterproof until the final 3 hours of last year's 1000 miles in 24 hours ride when it was like standing in 2 small bowls of icy water.  They've done sterling service but truly waterproof boots are an absolute must.  Didn't realise just how different various well-known brands of boot varied for comfort, both in terms of fit and the ability to walk without the gait of a chimpanzee!  Settled on a pair of Alpinestars specially made for Triumph with a nice embossed logo.  They were actually brought in for another customer who had been notified 3 weeks earlier and still hadn't turned up so I was delighted to benefit from his slackness!  Interesting though - I normally take an (NZ/UK size) 8 1/2 - 9 shoe or boot but the Alpinestars were a perfectly comfortable 9 1/2.  A compelling reason for not buying boots on line. 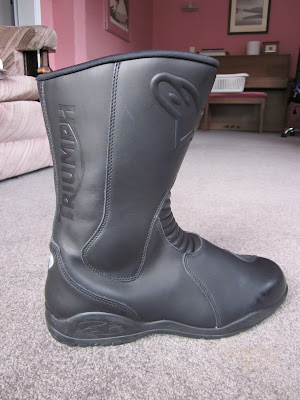 After spending more time than planned in the Triumph shop, I had just over half an hour to get to the rendezvous with Wayne and grab a bite to eat.  Four and a half km as the crow flies - dead easy right?  Wrong!!!!  In general, NZ cities aren't laid out in grid pattern and roads weave everywhere.  There was a little triangle on the GPS which was me and the meeting waypoint 4.5 km away.  I assumed it would be easy to simply point in the general direction of the waypoint and watch the distance close.  Crikey, every road seemed to run at right angles to where I wanted to go and at one stage, found myself on the wrong side of the river which runs through the city with the nearest bridge some distance away.  Made it with severely frayed nerves having covered over 10km with 5 minutes to go!  Wolfed down a million calorie, cholesterol-laden gas station meat pie (tasted great though) and then Wayne turned up to begin the motorcycling equivalent of the Spanish Inquisition.  Well, not quite but being observed can sometimes feel that way!

Wayne told me to head for the main street in the city and then basically weave down the side streets coming off it for a block, back onto the main street and so on.  Boy, was Hamilton busy!!  It's one of the main venues for the World Rugby Cup which is currently being held in NZ and the place is filled with flag-waving fans from round the world - looked fantastic but a bit of a nightmare to ride through!  Pedestrians jaywalking everywhere, cars everywhere too and doing stupid stuff.  On top of that, one road I wanted to turn down was blocked off by police and there was also a helicopter in attendance.  Turned out to be a bomb scare at a nearby Institute of Technology annexe.  So that'll be a student buying time to get an overdue paper in then!!

Now here's an interesting thing...... there was so much going on that a few months ago, I doubt that I'd have been able to process all the inputs sufficiently quickly to avoid making some stuff-ups which would have earned some red ink on the assessment sheet.  However, I felt quite comfortable and after 90 minutes of riding in the central city area, Wayne went through the assessment sheet and I'd scored straight A's!!!  There's no feeling quite like having tackled something which is genuinely demanding, having worked extremely hard to get a decent outcome and seeing confidence and skill levels improve..... fan-bloody-tastic!  It's also great to be able to repay in some small way the IAM observers who put so much time and effort in on a voluntary basis.  The final comment on Wayne's assessment sheet was "Go riding again with Philip McDaid (Chief Examiner) - all the best!" so I'm picking that the big one - the full membership test must be pretty close - eek!

Just to finish off, I heard a bit of scuttlebutt and because it hasn't been verified, it's all the more delicious to pass on.  Regular readers will be aware that there's another Kiwi blogger who is following a similar training path.  This particular blogger was due to attend an IAM ride last weekend but slept in because he forgot to put the clocks forward one hour!!!  I reckon that ought to be good  for a few beers all round, don't you?  Especially as it doesn't seem to have been mentioned in his blog, haha!