Travels in the Land of the Dragon, pt 5

A straightforward and short internal flight to Xi'an in a modern Airbus jet.  All our bags are collected at the carousel by the Viking team which saves a lot of hassle and they magically appear in our hotel room some time later!

Before getting down to business, I really must remark on the choice of hotels by Viking throughout the tour.  Five star throughout means real quality but the Renaissance in Xi'an is at the very top of that rating.  Only La Residence in Hue, Vietnam; shades it in terms of personal experience.   You could hold a conference in our room! 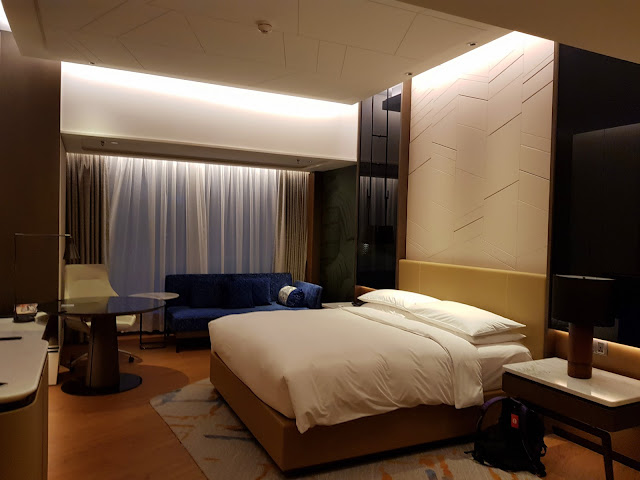 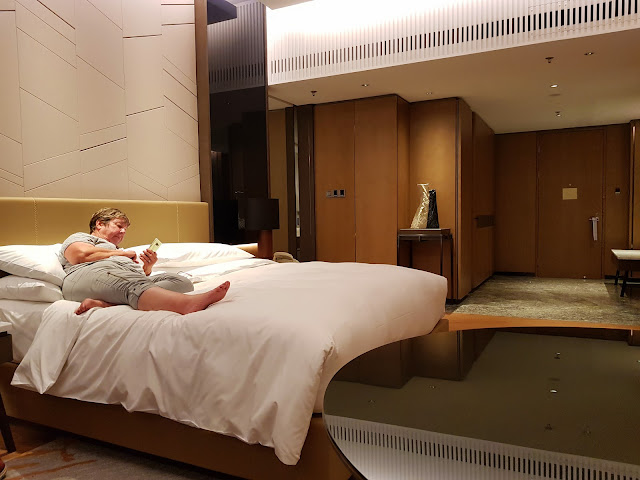 View in the other direction

In addition to what you see, there is a massive all-marble and glass bathroom tucked away round one of the corners.  The wet area consisted of a bath and shower which was slap bang in front of a large picture window.  About 100 metres away was an apartment block.  Anyone with a set of binoculars or telephoto lens........ if you get my drift.  I mentally resolved the problem by thinking that watching a 71 year old male wouldn't attract much interest. I didn't solicit Jennie's opinion in the knowledge that the response would confirm that belief. It was only after the shower that I discovered the control for a well-hidden powered blind, sigh.......  So far, no blackmail attempts from the Ministry of State Security (I jest!)

It was an early start to see the Terracotta Warriors before the crowds built up.  Perfect timing as it was the only wet day of our stay in China and apart from walking between buildings, most of the action was indoors.  However, with the lengthy walk from the coach drop-off point, looking at the displays and walking back to the pickup, several kilometres are involved.  With old sports injuries to my knees and Jennie having had a hip replacement earlier in the year, we both used single walking poles to good advantage.

Most of us have seen photos or TV programmes about the Terracotta Warriors but NOTHING can prepare you for seeing the real thing.  The sheer scale of the endeavour is simply overwhelming.  The size of pit 3 is monstrous and the staggering thing is that it will still be excavated for years to come.  Here is a small selection of photos.  Jokes involving the word "statuesque" being carefully avoided. 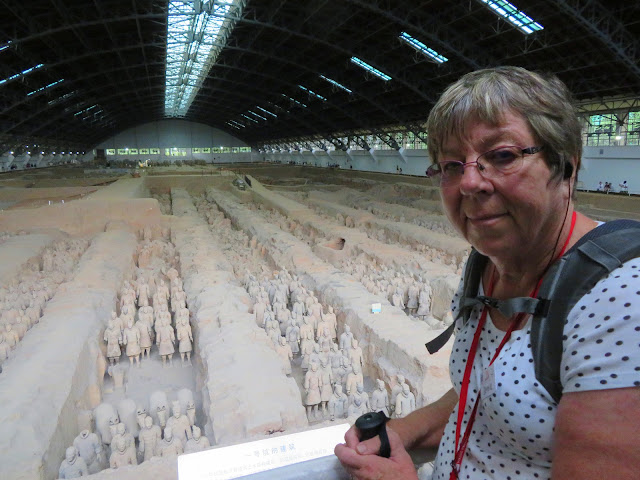 Jennie and part of pit 3 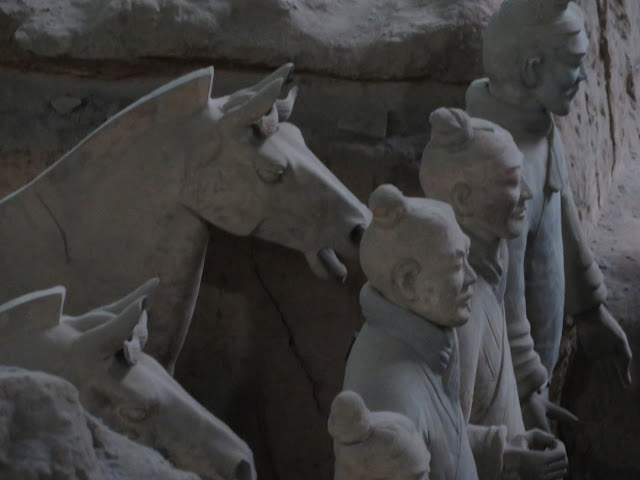 Horses and warriors - each one different 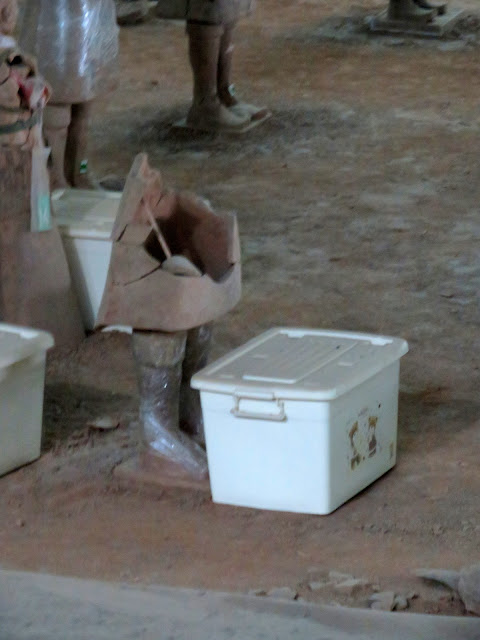 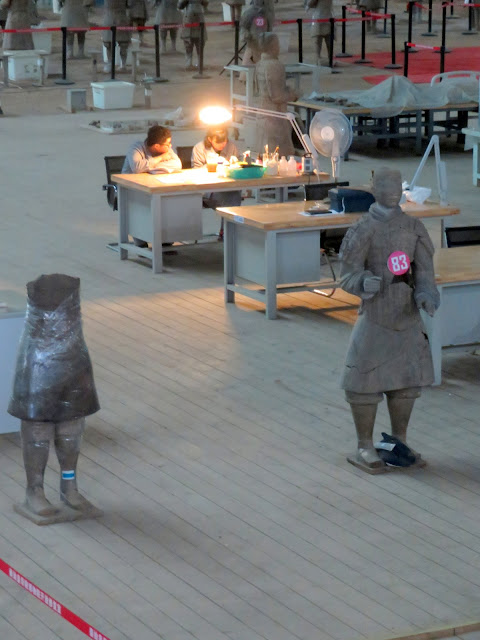 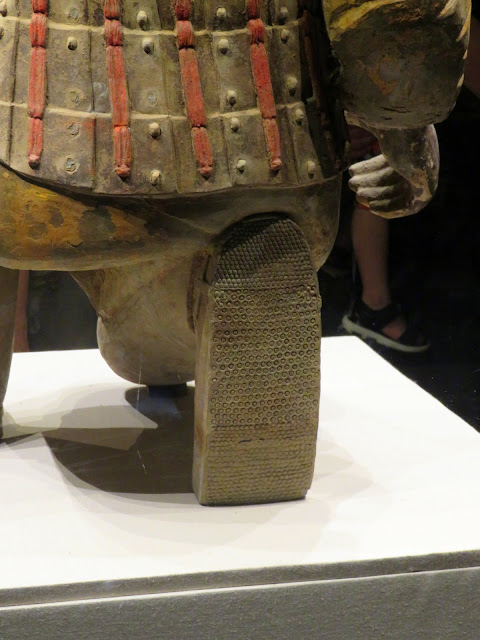 Exquisite detail on the sole of a kneeling archer 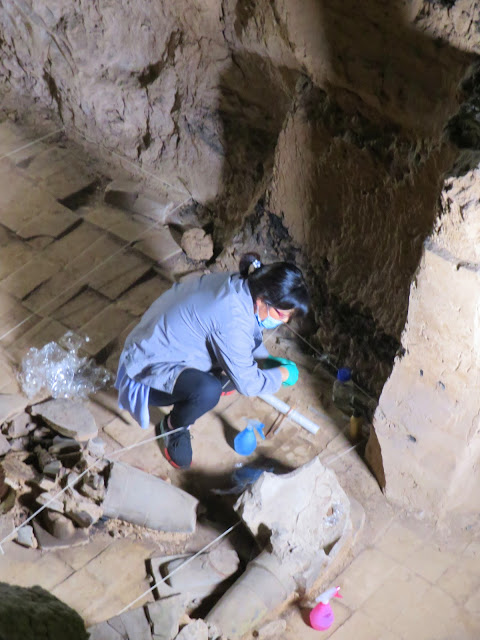 Although I've added a lot of photos, there is no way that anyone contemplating this trip will justifiably feel it's been spoiled by too much prior exposure.  The sights are so dynamic that they're ever-changing and as I mentioned previously, photos and narrative simply can't compete with being there.  One final photo , the content of which came as a real surprise, especially with me having studied and practised engineering for much of my life.  Chrome plating (of a sort) was known about in China around 250 BC!  The photo below shows a sword which still has traces of chrome plating. 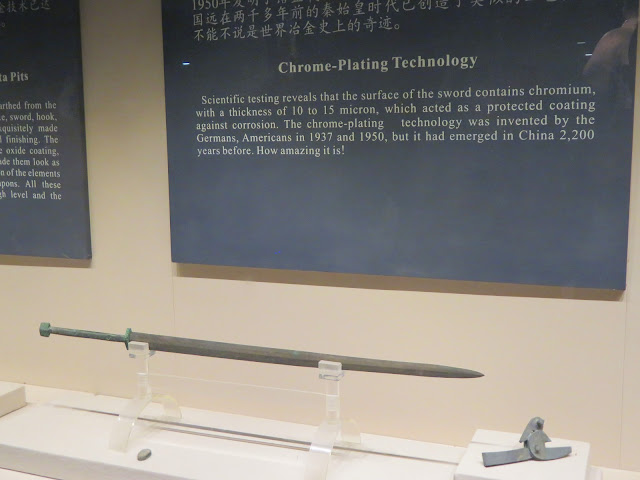 Traces of chrome on the sword

After the Warriors, we visited a factory which produced high quality lacquerware .  What a privilege to see traditional craft still practiced.  In the photo below, an artisan is putting the finishing touches to a hand painted globe.  The price as you might expect wasn't cheap but it's an art object, not a child's toy! 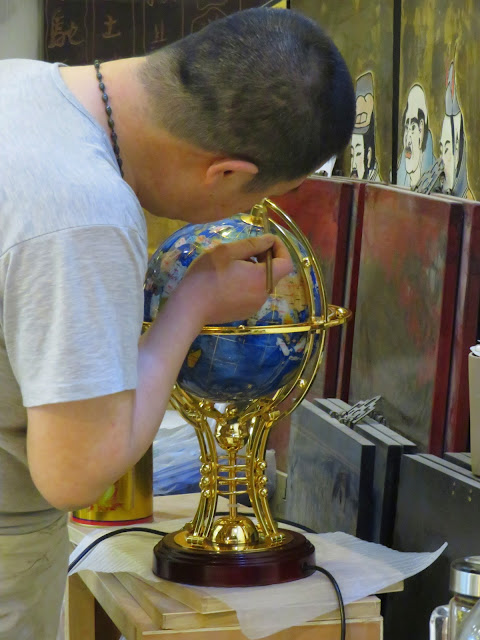 The word nice is an understatement 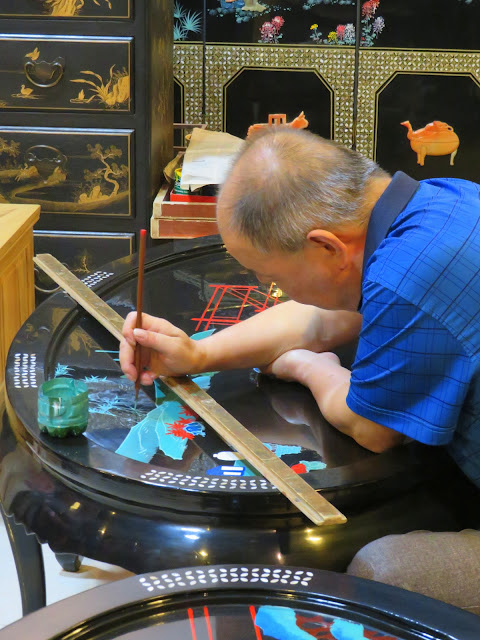 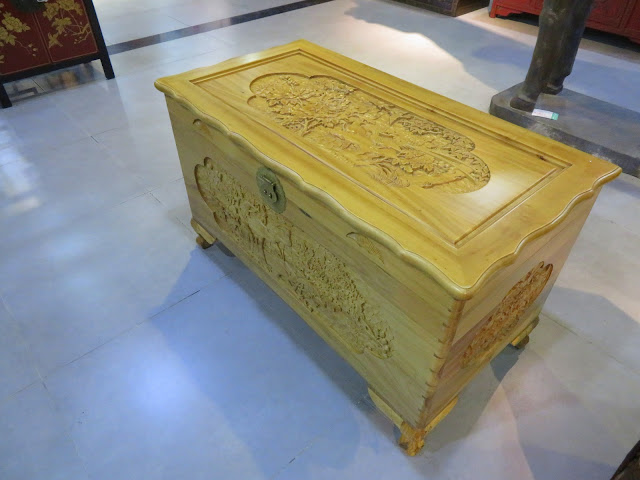 A late lunch that day was a high quality buffet.  I tend to avoid lots of food photos but at this restaurant, chefs were making noodles from scratch on the spot and adding them to beef broth.  We were able to then add herbs and/or vegetables.  In my case, it was chopped scallions and garlic chives, dressed with chilli oil.  Looked sensational and tasted equally good! 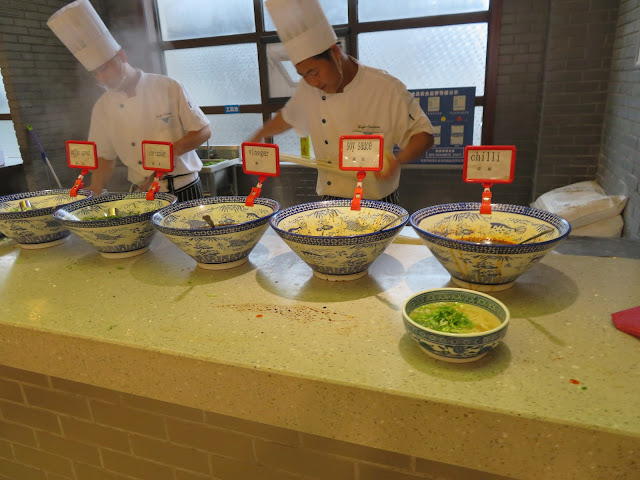 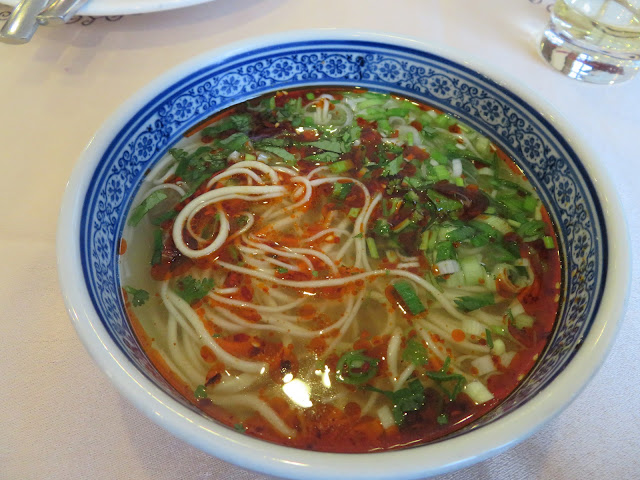 That evening, we had the option of attending a Tang Dynasty dinner and show.  I was indifferent about going along but Jennie was keen and it would be a shame not to take full advantage of the occasion.  So glad we did - it was brilliant!  The story was pretty easy to follow and the live orchestra was excellent.  However, the visual effects, using computer projections onto translucent cloth were world-class and the actor costumes were outstanding.  So was the bottomless rice wine served with dinner, but enough of that!  A few pictures..... 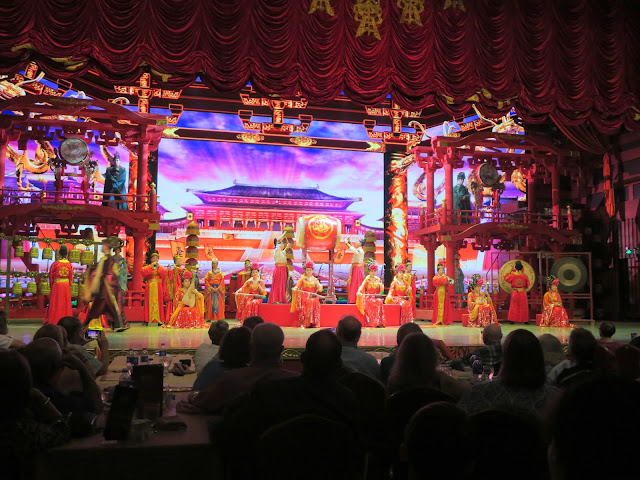 One of the computer-aided sets 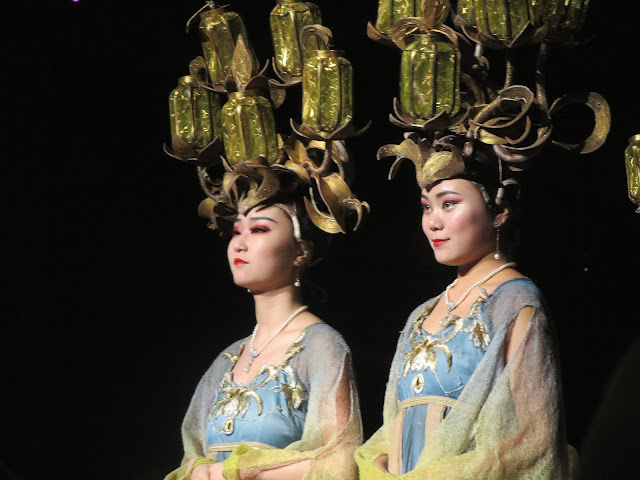 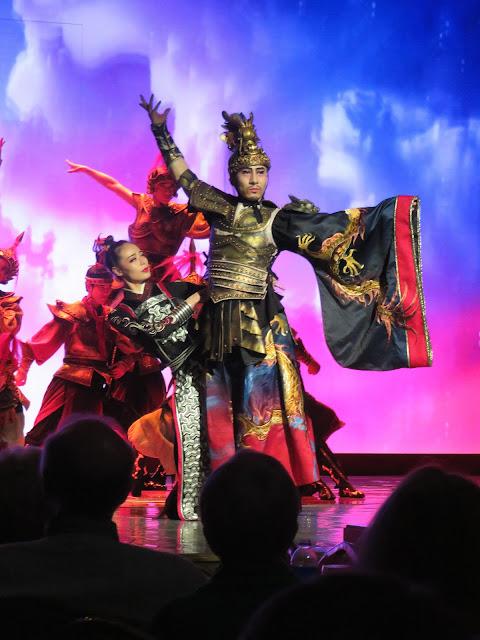 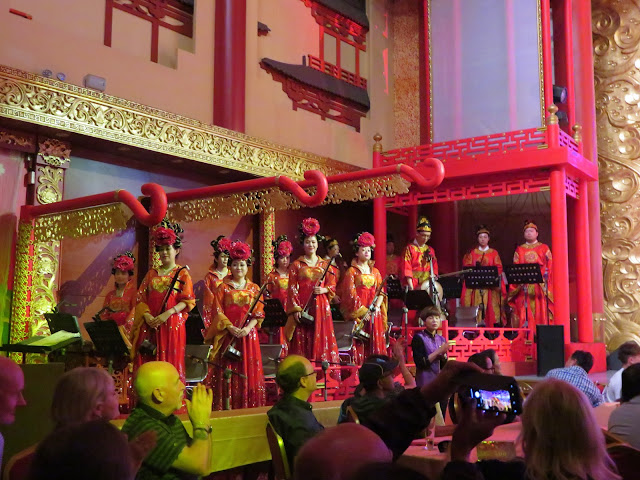 A short video from the show


On the way back from the show, we went through central Xi'an where all the streets and trees were beautifully lit with coloured lights - quite a spectacle.  The following photos aren't high quality due to exposure time but they give some idea of the spectacle. 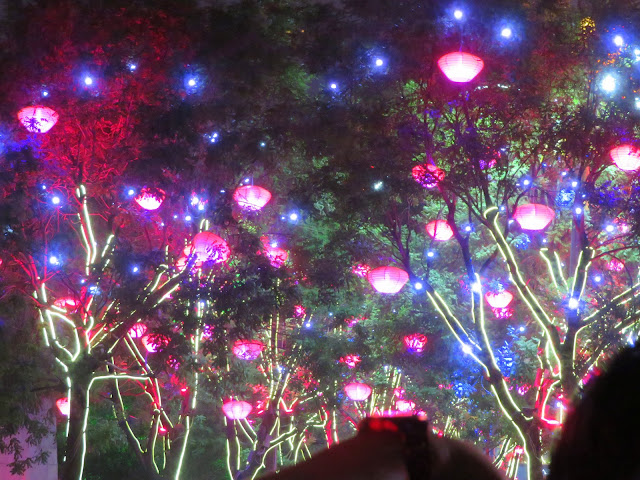 Illuminated lanterns in the trees 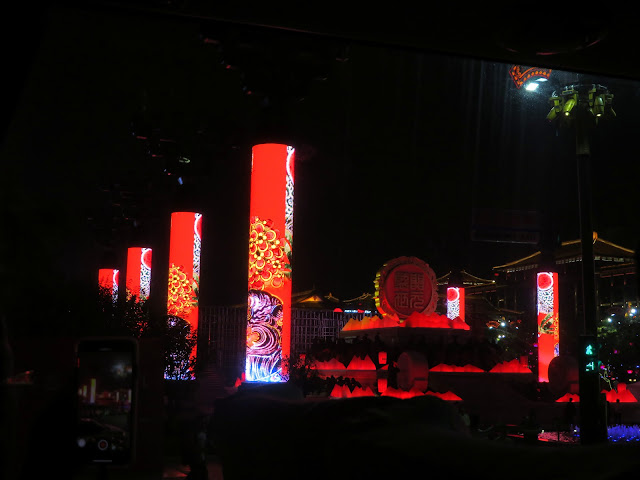 Entrance to a park 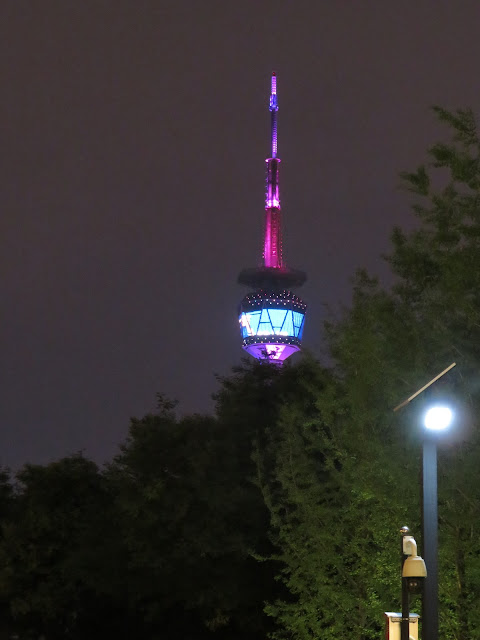 That was the end of our stay in Xi'an, with a flight scheduled for Beijing, the Great Wall, Tiananmen Square and the Forbidden City. The Great Wall was something I'd known and thought about since my teens.  Now it was about to come true!

Next - Beijing and the Great Wall
Posted by Geoff James at 13:17