Travels in the Land of the Dragon, pt 3

By way of a short introduction, the Three Gorges area covers about 240 km of spectacular limestone gorges.  The Three Gorges Dam itself became fully operational in 2011/12 and is the largest hydroelectric station in the world. Over the centuries, the Yangtze River has been subject to fairly regular severe flooding, particularly in the lower reaches.  This has caused considerable loss of life and major damage to towns and cities along the river.  The decision to build a massive dam to regulate water flow (and generate energy from a renewable resource) wasn't without controversy, particularly as it involved raising the water level upstream of the dam to some 170 metres above sea level.  The consequence was submerging numerous towns and villages as well as antiquities and adversely affecting the environment.  Relocating a substantial population would also require the construction of new cities to re-house them.  It seems to me to be a case of damned if you do, damned if you don't but being pragmatic, the Chinese went ahead which was likely the correct decision; even if not a straightforward one.  That's a difficult real world decision which had to be taken with some substantial downsides as well as positives.

Heading towards the gorges, we were taken by the elegance of the numerous bridges and here are some examples. 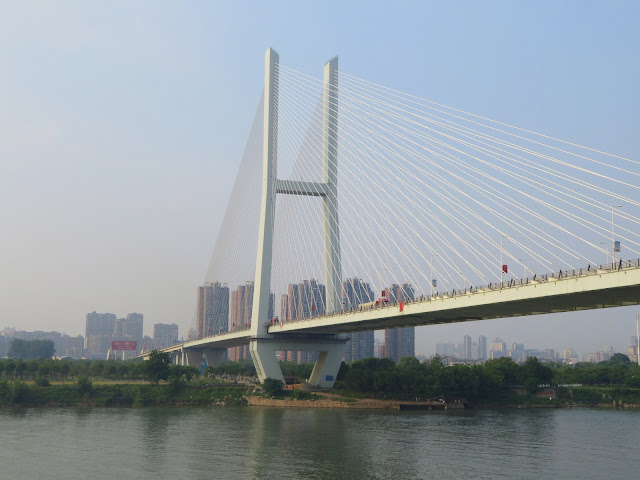 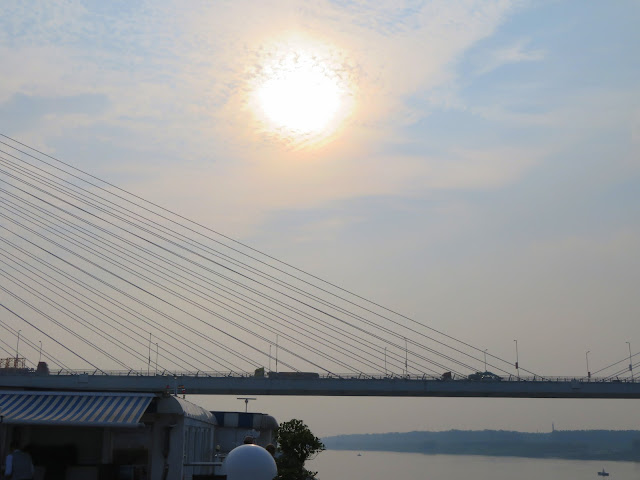 Substantial cables add to the elegance 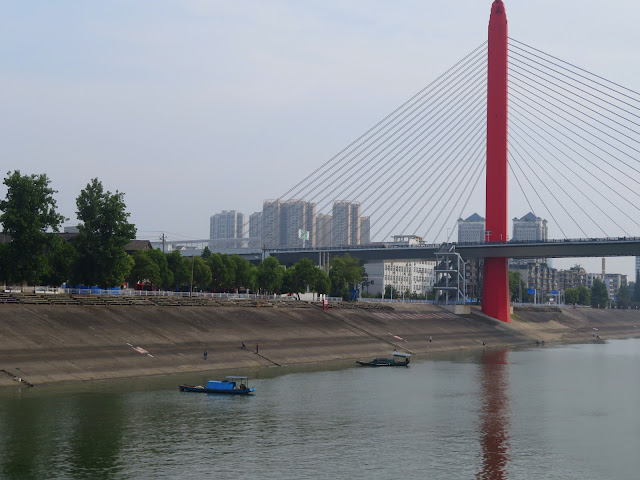 A bit of colour variation

In the lower reaches of this area, there was quite a bit of industry along the river banks.  In the example below, a shipyard blended surprisingly well with the local topography. 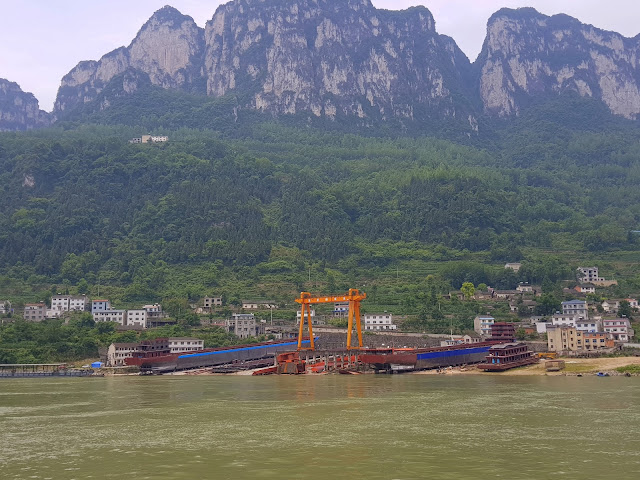 Industry and nature all in one photo 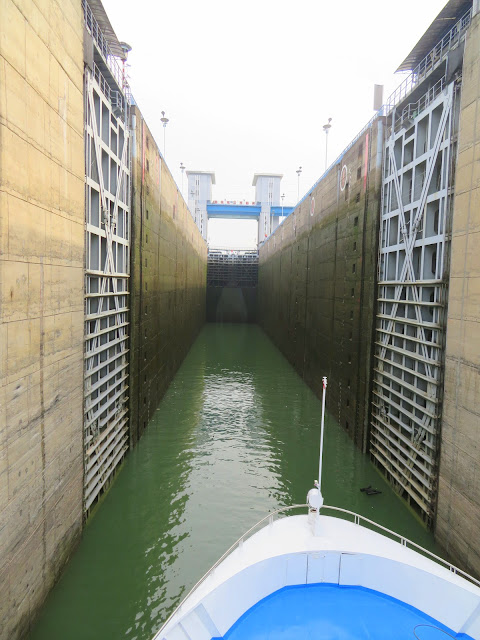 Entering the lock at the Gezhouba Dam

Passing through the gorges, various towns were encountered which were precariously perched on the hillside. 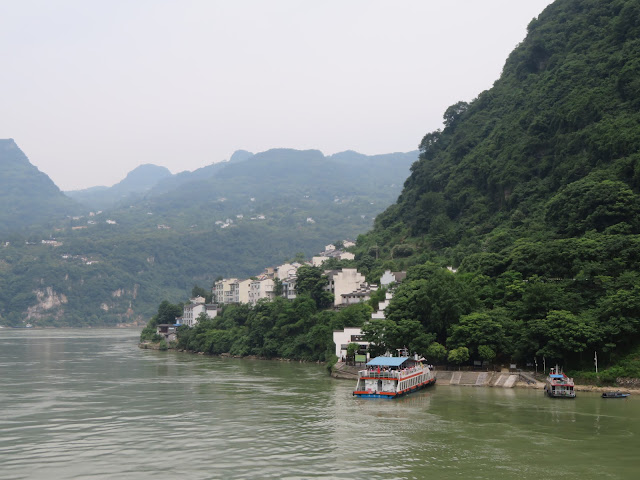 A picturesque town in the gorges 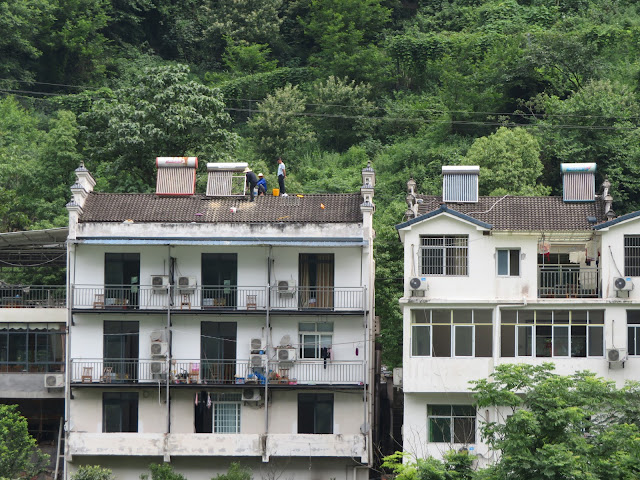 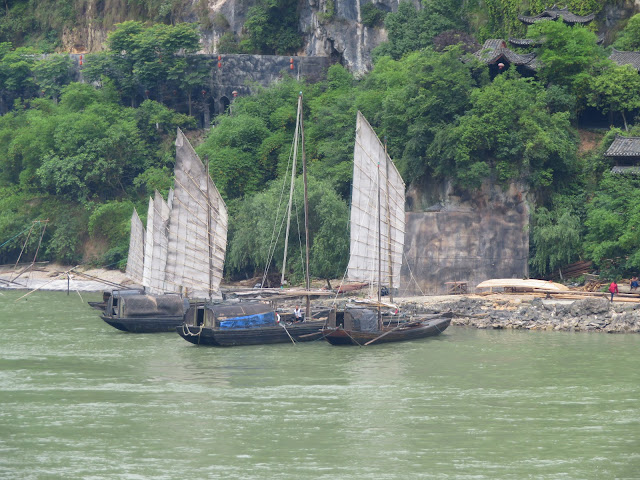 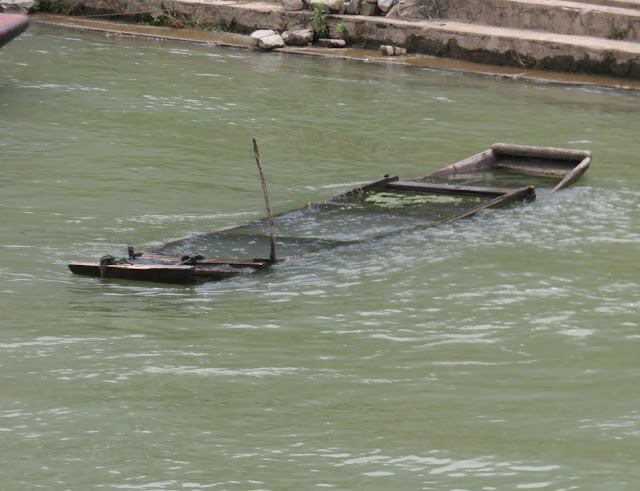 Hmmmm.... nothing that a small tube of silicone won't fix! 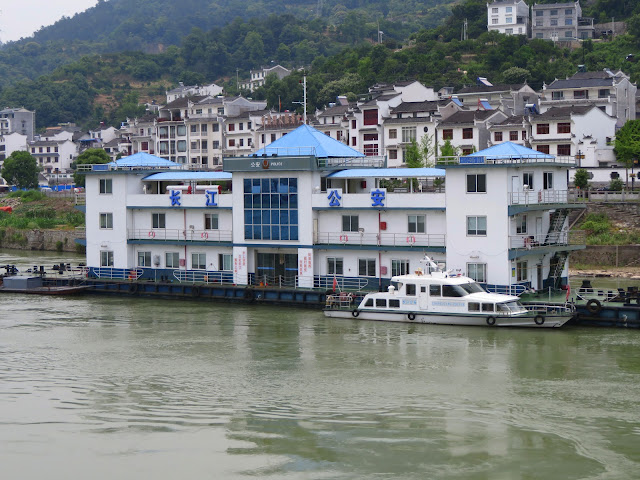 Base for the local water police

Before we reached the main dam, we were given an excellent on-board talk about its construction and operation.  I'm hesitant to help readers lose the will to live by giving too many facts prior to a few photos but here are just a few details to show the mind-bending scale of the project.

In other words, mind-blowingly BIG!

It has upstream and downstream locks for large vessels and a vertical elevator for lifting ships under 3000 tonnes, along with flotation water. 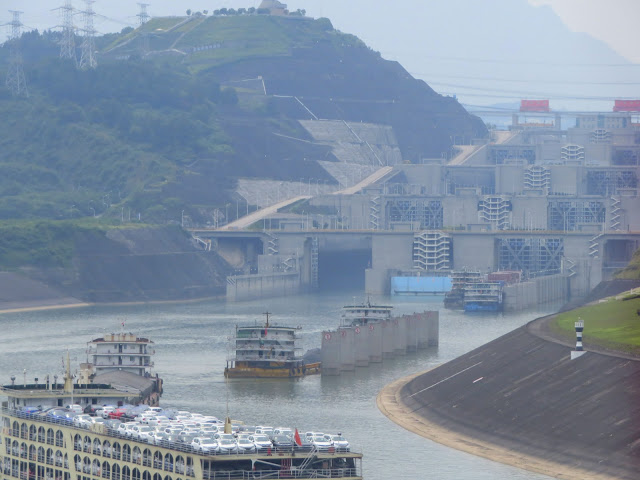 First sight of the staircase locks - each rising 22 metres - incredible!

Before passing through the locks which was to take some 3-4 hours, we were able to disembark and walk round parts of the dam which was an incredible experience.  Here are a few representative photos from the heap we took. 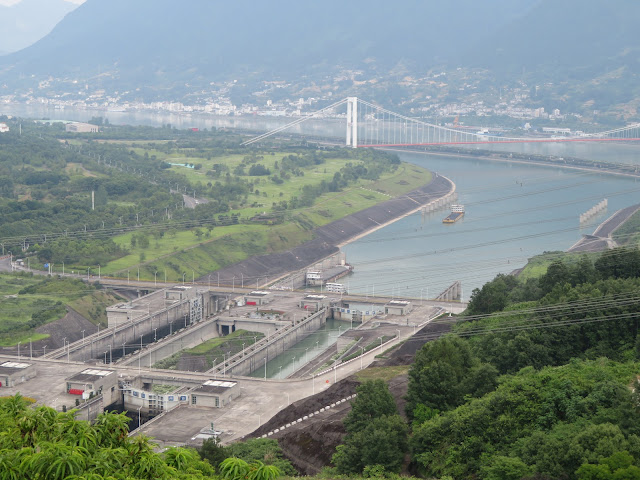 Entry to the locks from above 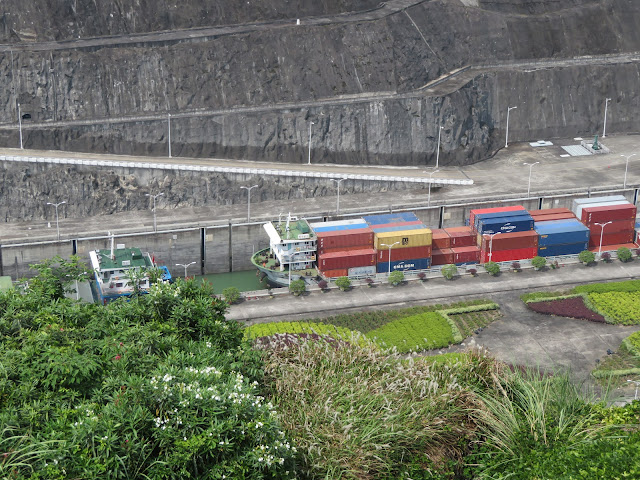 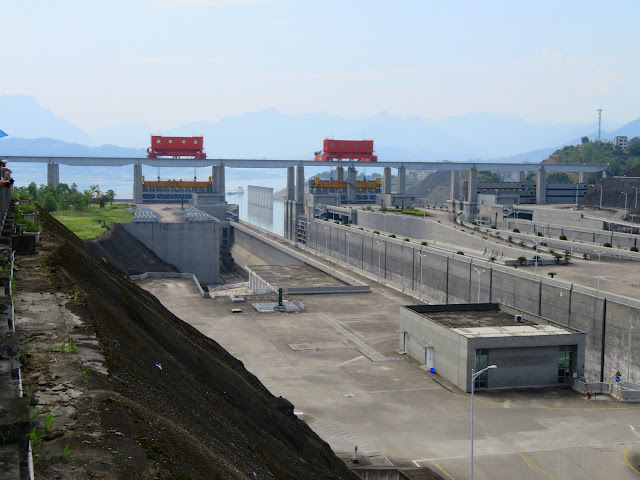 Top end of the locks including the smaller boat elevator 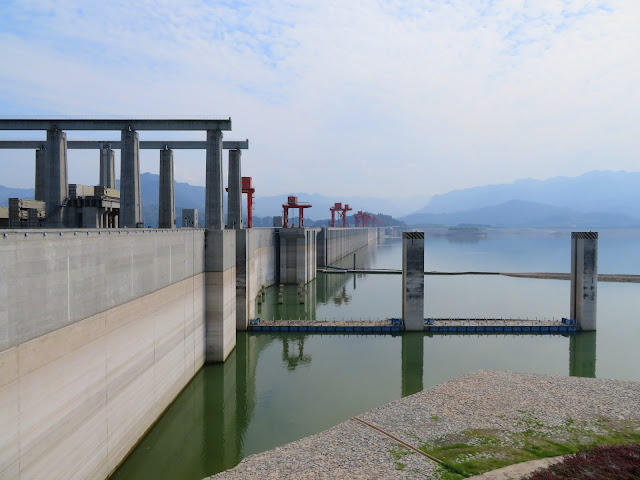 Soon, it was our turn to pass through the dam and locks.  Nothing can prepare you for the sheer scale of the project and you feel pretty insignificant when inside it. We shared each lock with several other large vessels, such was the size.  The journey started in daylight and finished in the dark which was a great way of seeing it. 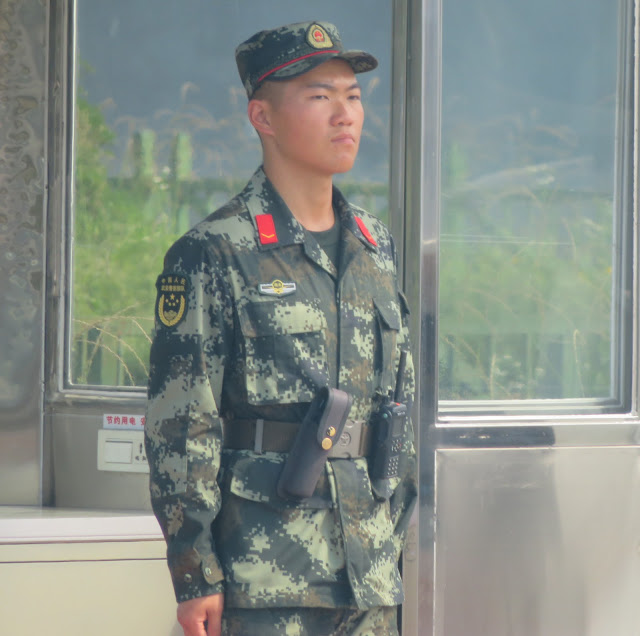 Guarded by the military as a critical strategic project 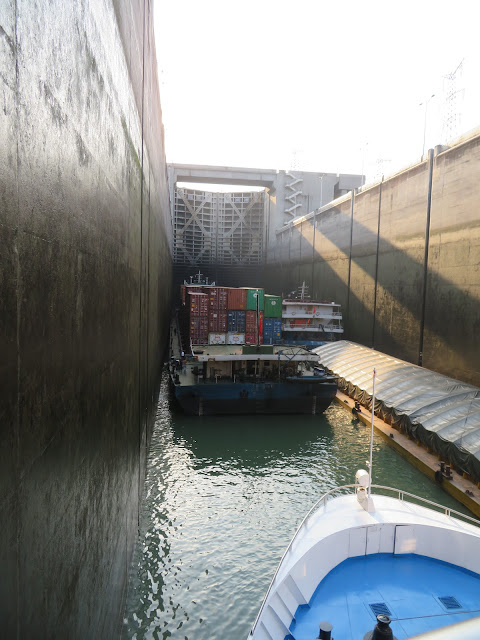 Entering the lock with other large vessels 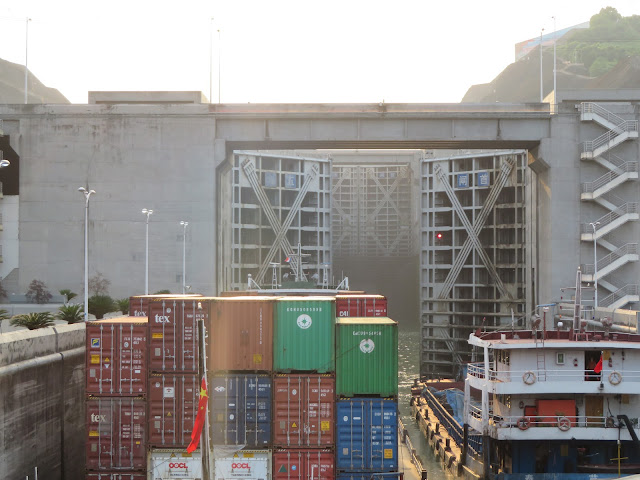 Some of the commercial vessels seemed to have whole families on board with nice decorative touches like pot plants and other items to turn it into a home. 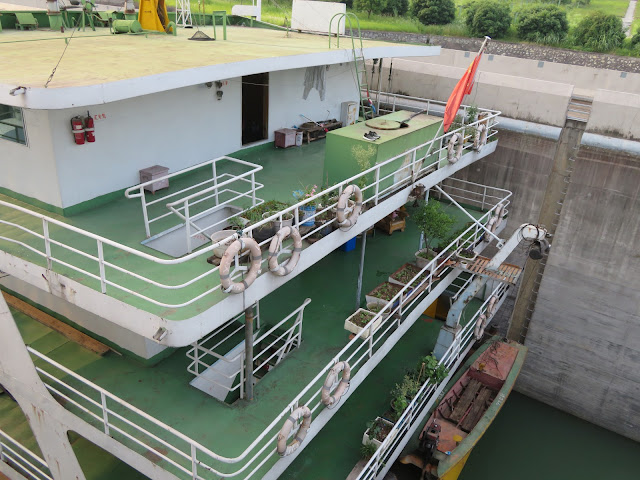 Pot plants and what looked like herbs or vegetables being grown! 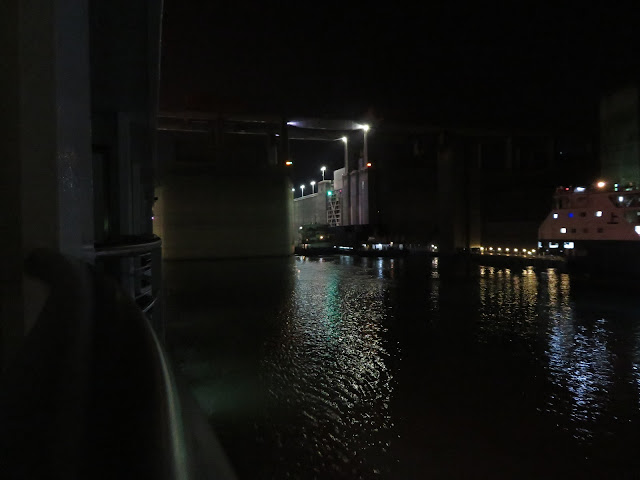 Exiting the last lock after dark

The following morning, we transferred to sampans run by locals for a trip up the Goddess Stream, a small tributary of the Yangtze. The narrow waterway and towering cliffs were overpowering to the senses - we were running out of superlatives! 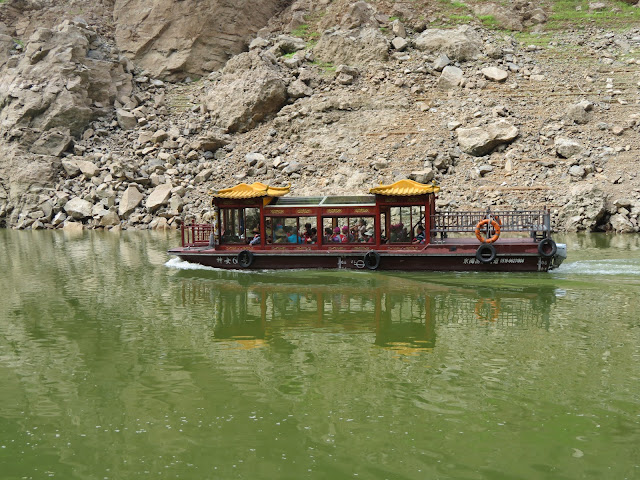 Sampan on the Goddess Stream 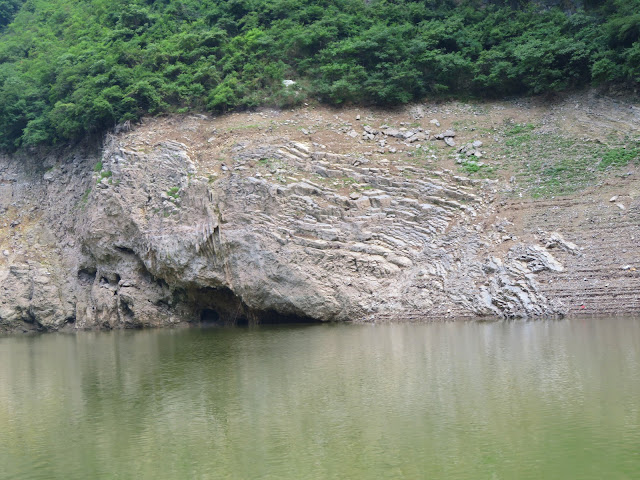 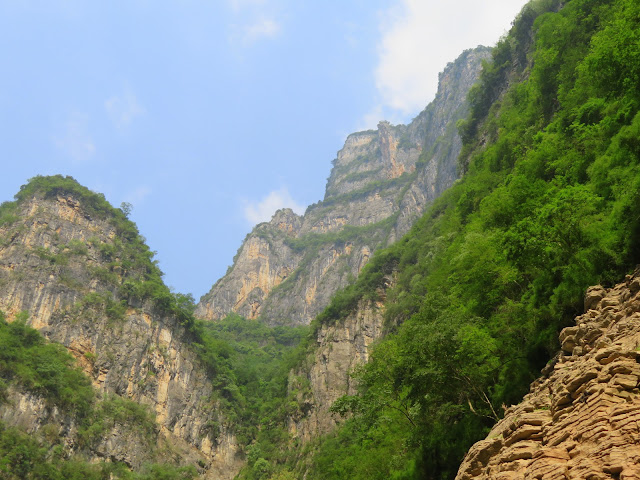 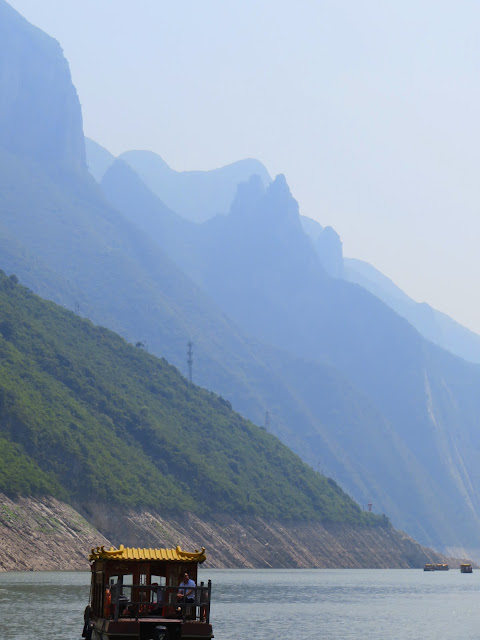 It's always a pointer with respect to how engaged people are with their surroundings - not much talking whilst we were travelling up and down Goddess Stream.  Again, words and photos can't do it justice.

I haven't commented much on shipboard life simply because of the attractions outside the vessel.  However, it can be summed up as outstanding.  Great company, magnificent food that catered for all tastes, top facilities and probably best of all, a crew who went above and beyond to ensure that we all had a great time.  I'm not really a cruise person but the balance between cruising and land-based activities was spot on.

Next - Upstream to Chongqing
Posted by Geoff James at 14:33