Travels in the Land of the Dragon, pt 2

Wuhan to Jingzhou and beyond

The internal flight from Shanghai to Wuhan was straightforward but our escort, Iowa, inadvertently caused much merriment.  Before the flight, he provided us with lunch boxes containing a sandwich, fruit and other things to eat on the plane .  He thought that we may not like the "warm milk" served on the plane.  A bit of head-scratching at that statement but we thought that it must be a local airline custom on short hauls.  When the food came round on the plane, it was clear that he actually meant "warm meal" and a good laugh was had by all!  He was right about the airline meal - flavoured noodles and not much else.

First stop after disembarking was to see some artifacts discovered in a tomb dating back to 433 BC. Of these, a set of 65 bells and chimes weighing 5.5 tonnes was the most spectacular.  These are shown below. 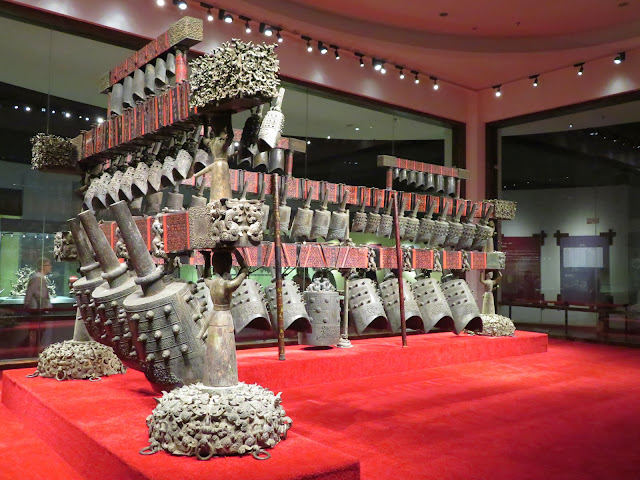 After looking round the collection, we were treated to a performance on a replica set with other traditional instruments which was superb.  Here's a short video of one piece they played - you might recognise the tune.

From there, it was to our ship, the Viking Emerald and shown to our nicely appointed stateroom which had an open air balcony.  Holding some 128 staterooms, it never seemed crowded.   The Yangtze is some 6300km long and although our cruise component was significantly less than that, it struck a perfect balance between water and shore-based activity.

As a bit of semi-irrelevant trivia, on arrival at Shanghai airport, the handle on my wheeled suitcase was found to be jammed in the closed position and I couldn't shift it.  Ended up walking like Quasimodo with it through the airport as I naturally had no tools to effect a fix.  However, once on board the Emerald, a quick word with one of their engineers saw it fixed and returned within 30 minutes - awesome service!

Casting off and leaving Wuhan late afternoon we were treated to in incredible moving light show projected onto waterfront buildings and bridges stretching several km at dusk and into full darkness.  It was mesmerising and we could have watched it for hours. 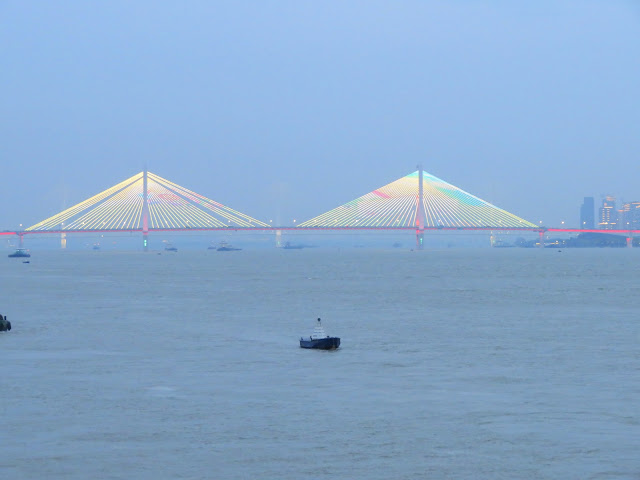 Ever-changing colours and shapes on a bridge

Waterfront lights starting to come on at dusk

This is part of the waterfront after dark. 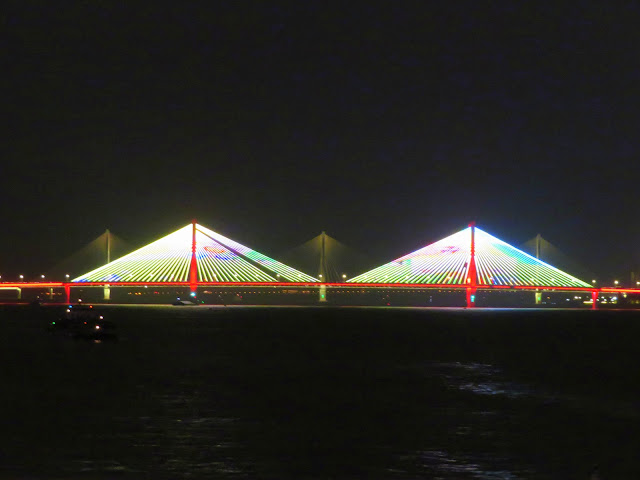 Another of the many bridges 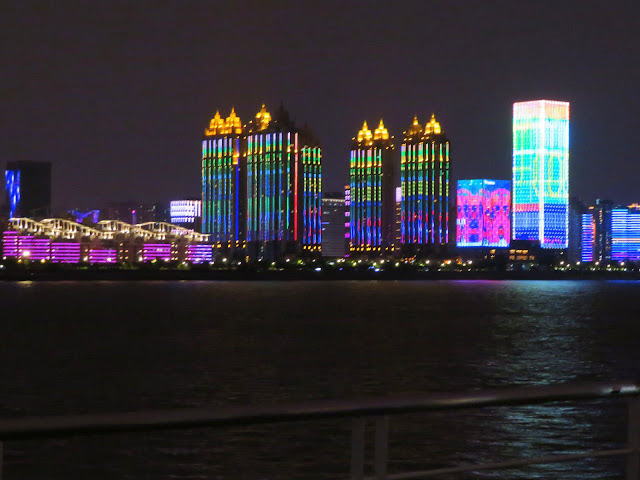 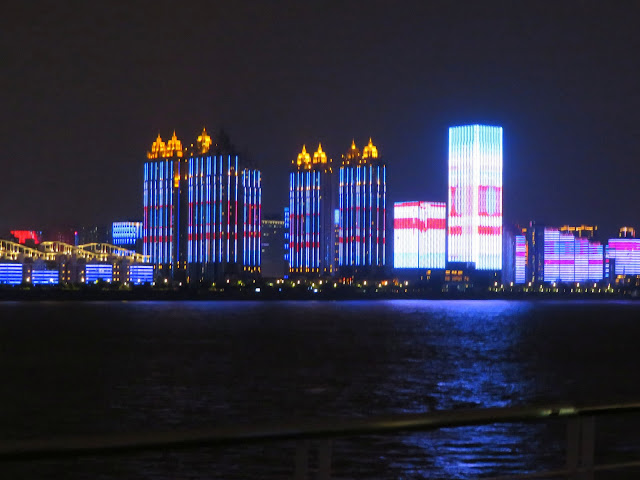 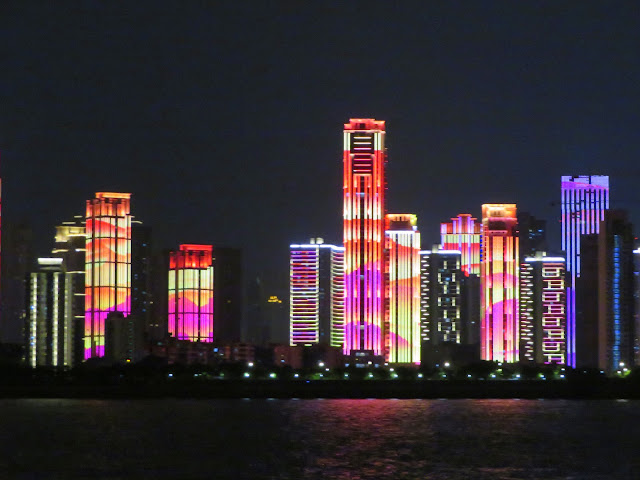 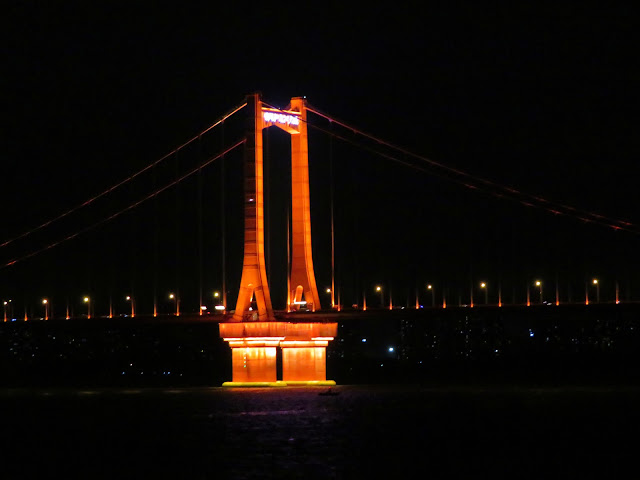 Illuminated pier of a river bridge

Meals and service on board the ship were outstanding and at dinner that evening, we were able to reconnect with two couples we had met in the hotel, Kathryn and Richard from Florida and Janet and Greg from South Dakota.  We all had the same cynical sense of humour and we were to become great friends. 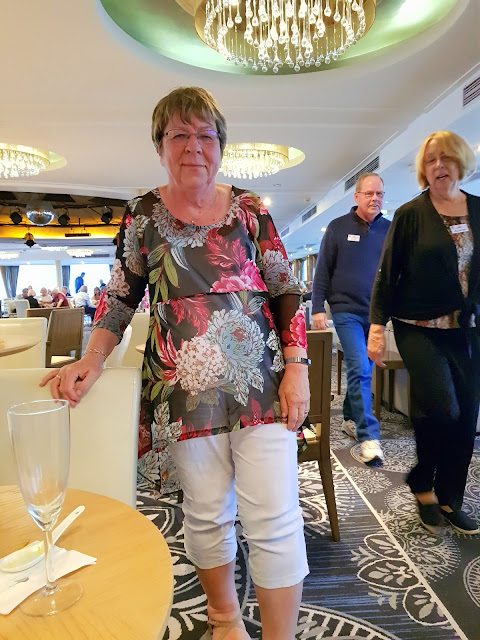 Jennie soon discovered the on-board tailor and was promptly measured for an evening dress jacket in silk. 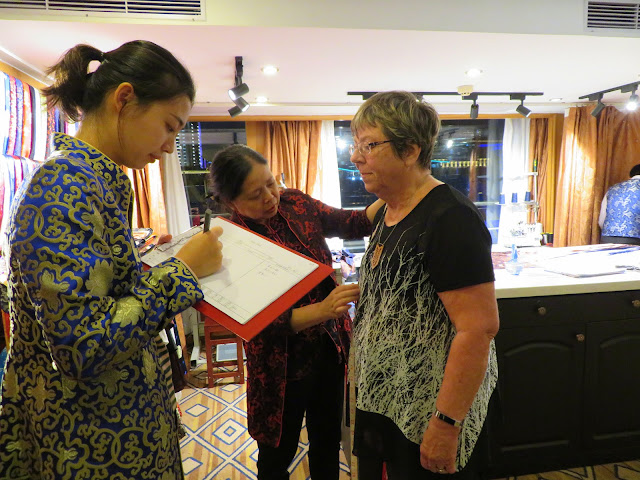 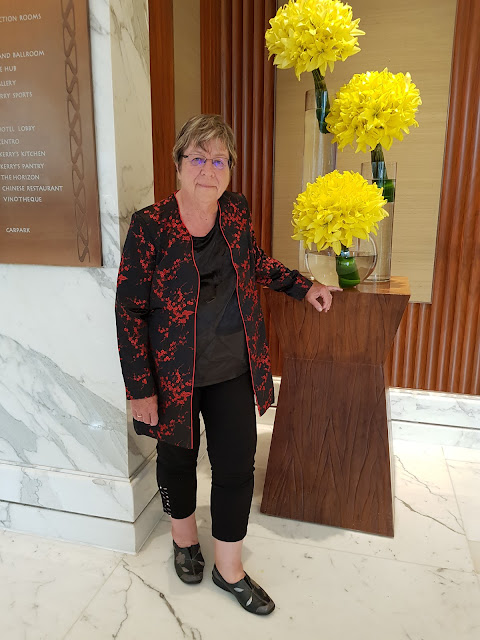 Wuhan also has a large coal-fired power plant and significant heavy industry on the outskirts.  There, pollution was noticeable as it left a burnt carbon smell in the nose and a metallic taste in the mouth.  In other locations whilst we were there, it wasn't really noticeable.  There was a haze in many places but I suspect most of this was due to humidity and temperature.

Next day, we tied up at Jingzhou and visited a school which Viking sponsors.  What an utter pleasure that turned out to be!  There was a festival going on in the school grounds to celebrate National Children's Day the following day.  There were lots of parents also present to watch the performances. 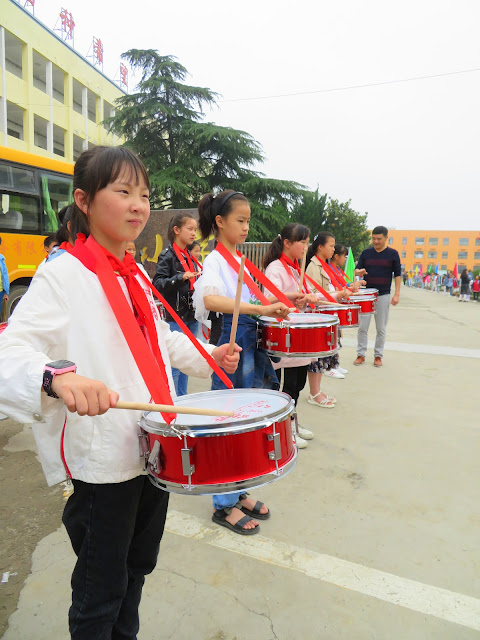 A warm welcome from some drummers 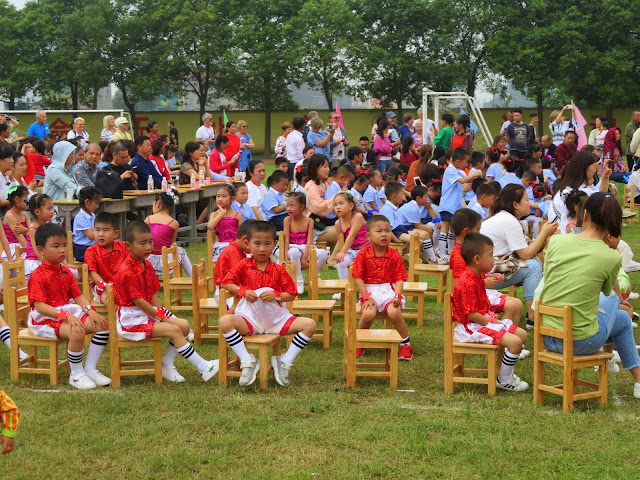 Schoolkids taking part in the festival 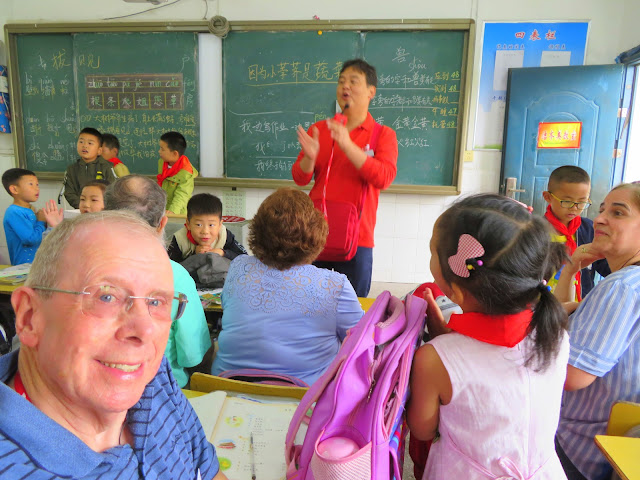 Yours truly crammed into a minuscule classroom seat.  Our escort Iowa is up front. 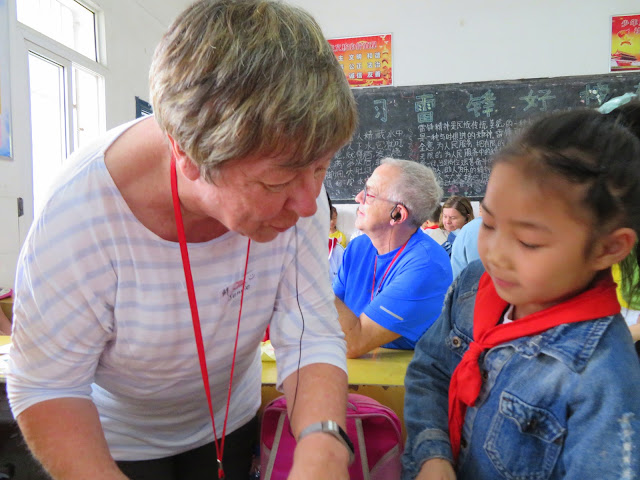 As an ex-teacher, Jennie was in her element

Despite the obvious barriers, it's amazing how well you can communicate with a few Chinese words,hand gestures and drawings.  It was so much fun interacting with the children and one of our true highlights.  We also sang them a song in English and the same one in Chinese, having been coached by Iowa.  They probably didn't understand a single word of the Chinese version!  Returning to the ship later, a raffle was held which raised approximately US$6500 for the school! 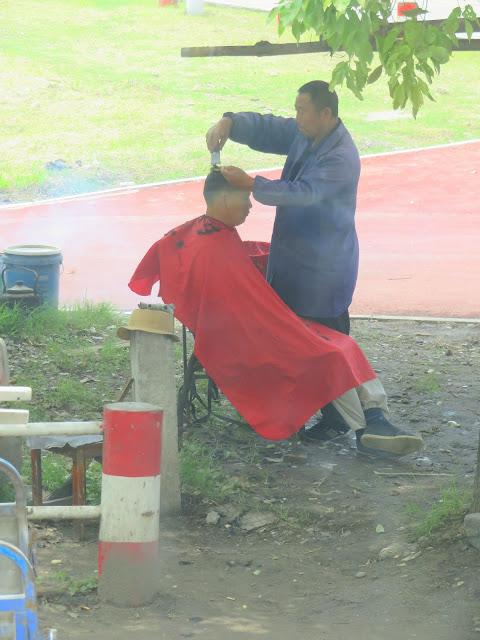 
Before casting off. we also visited the ancient city walls which were well-preserved. It provided a great contrast to the rest of the modern city. 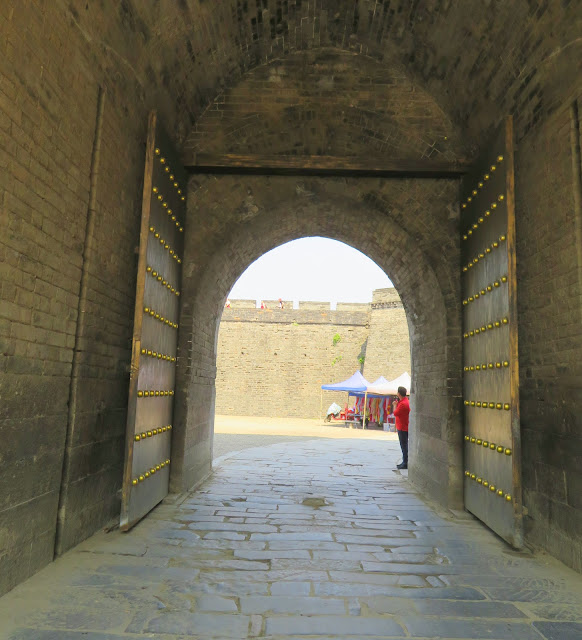 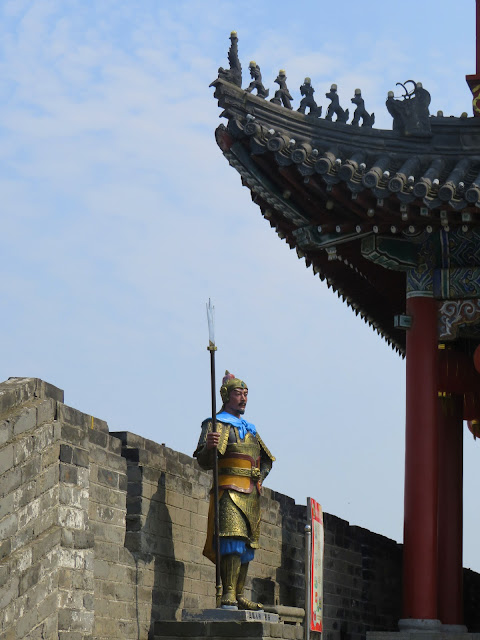 Part of wall with statue 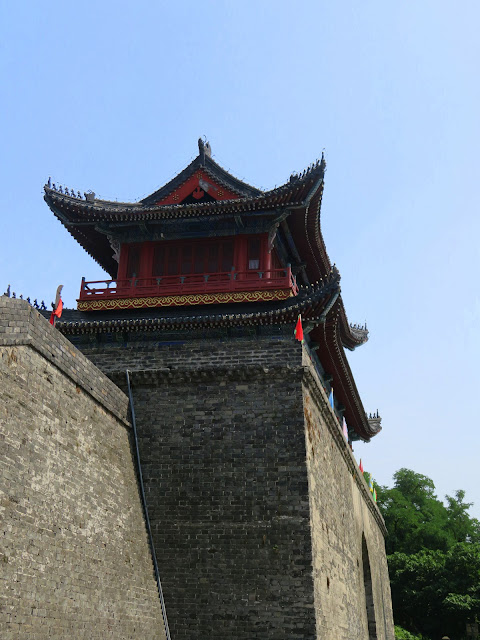 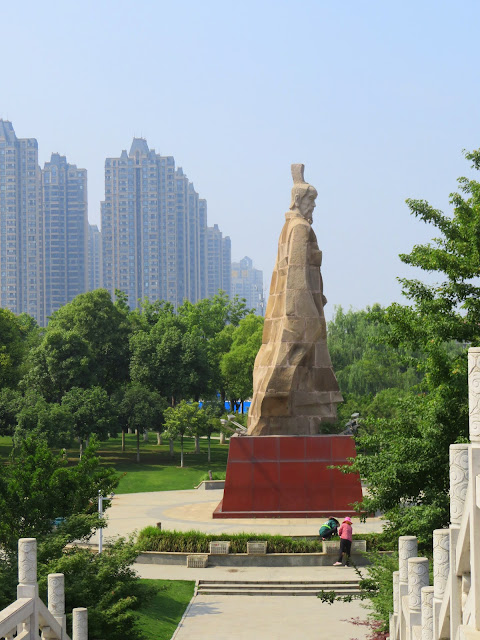 Travelling upstream, I was fascinated by the river traffic and the different types of boats.  Many of them seemed to be bulk carriers carrying civil construction materials for the massive projects along the Yangtze.  A lot of the boats seemed to have very little freeboard but maybe in relatively flat water, you don't need much!  Also, we both remarked on the fact that the same bulk loads were being shipped in both directions which was somewhat curious! 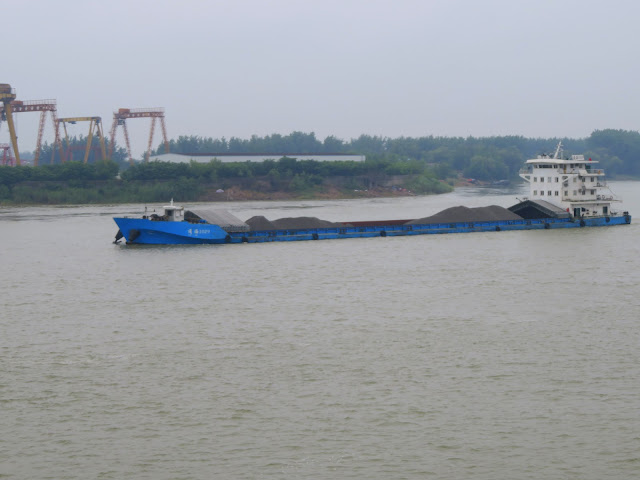 Certainly not a lot of freeboard here 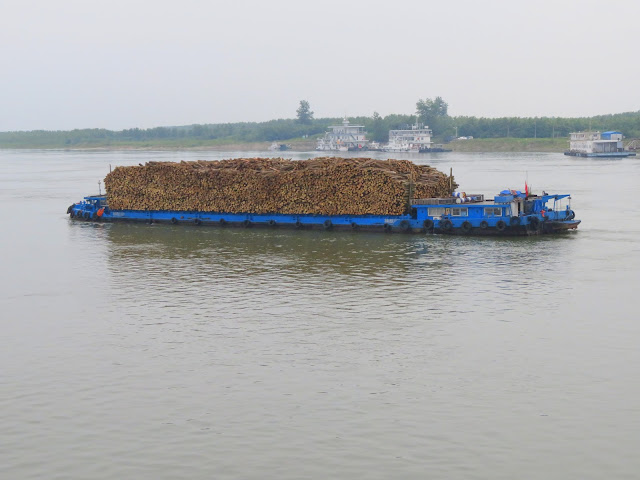 A decent load of logs! 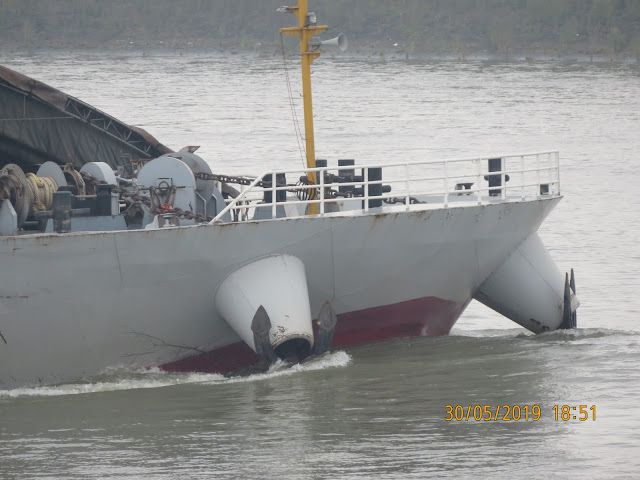 Great scenery and attractions, interaction with the wonderful schoolchildren and logistics/engineering problems to ponder - what could be better? (said with an almost straight face).


Next - the Three Gorges area
Posted by Geoff James at 13:47