Travels in the Land of the Dragon, pt 6

Beijing and the Great Wall

The flight to Beijing started well with loading being spot on time and it went downhill from there!  Thunderstorms in the Beijing area had caused inbound flights to be delayed and we missed our take-off slot.  Consequently, we sat on the tarmac for over two hours until another window opened.  Everyone was completely philosophical about it and time passed quickly with passengers intermingling and chatting together.  Unfortunately, the additional time meant that we missed out on a tour of the old quarter Hutongs in Beijing by rickshaw but again, it was just a case of c'est la vie.  The Kerry Hotel was yet another 5 star hotel.  A little older than the others but still lovely and very welcoming.  It had the best pillows I've ever slept on.  Oh for a bit more space in our luggage, haha!

Let me start with a bit of flippancy, which may be a pointer towards what passes for my sense of humour and also my engineering background.  The next photo is not normally associated with a blog on travel.  May I introduce the toilet in our Beijing hotel. 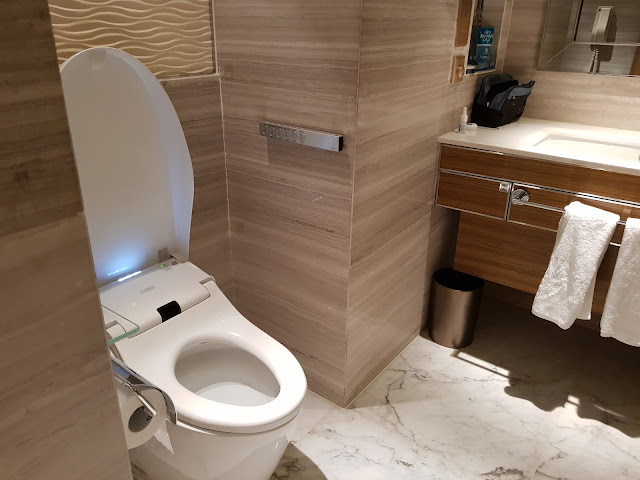 First trip to the bathroom was slightly unnerving.  It senses your presence and starts a discreetly hidden fan to.... well, you know.  It also auto-flushes when one walks away, either standing up or sitting down.  Hours of fun could be had trying to fool it!  The seat and lid also raise and lower like a medieval drawbridge at the light touch of a button.  A small light also comes on as one approaches.  Presumably a helpful aiming device for the middle of the night without bringing you into full consciousness.  But wait, there's more......

Note the silver control panel mounted on the wall.  One may select jets of water of varying temperatures, velocity and spread, directed at selected parts of one's anatomy for varying reasons (with uncanny accuracy, I might add).  Indeed, some guests may never leave their room but this description does not constitute an admission, you understand.

I'm not sure whether it's the engineer in me or a warped sense of humour but it wins my prize for an unnecessarily over-engineered appliance, not to mention providing temporary amusement!

The drive to the section of the Great Wall in the Badaling Hills was about 90 minutes or so from our hotel.  It was an early start to beat the crowds and the worst of the heat on a cloudless, humid day.  Not long ago, this section of the wall would have required a substantial trudge over steep terrain to reach the base of the wall.  However, a funicular elevator has been installed to get you a lot closer which was a godsend. 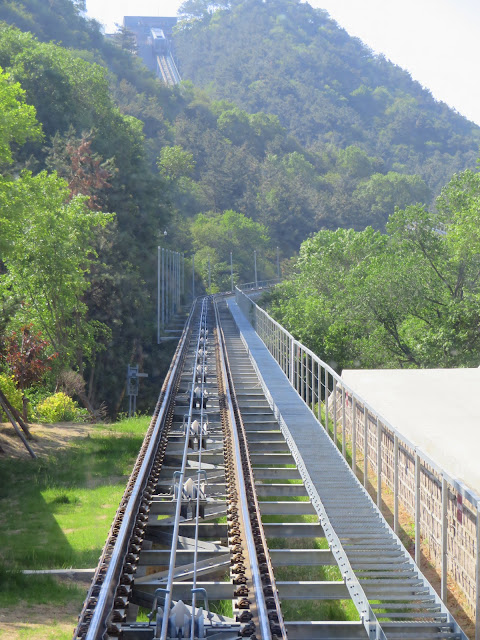 A few minute's walk from the top of the elevator and we were on the top of the wall.  I'm normally a calm, unemotional type but internally, I was a jumble of emotions with the wall under my feet and looking at it stretch out into infinity.  Having marvelled for 60 years or so at one of the greatest achievements of mankind, never having imagined that I would be one day standing on it; was an overpowering and glorious sensation.  We walked for a few kilometres along the wall in temperatures around the mid 30's C and high humidity.  Regular hydration and walking poles helped enormously. 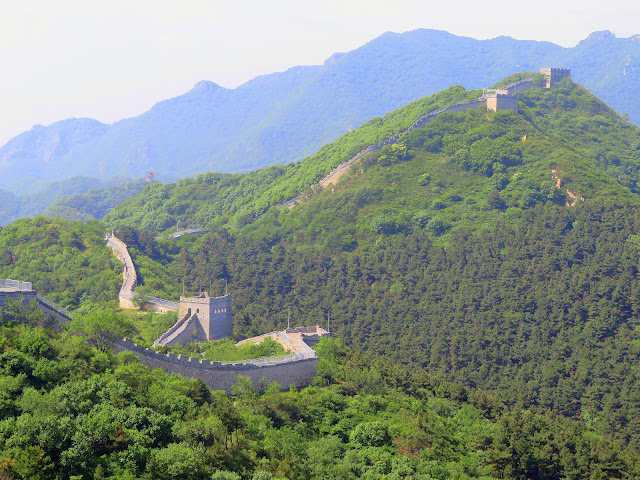 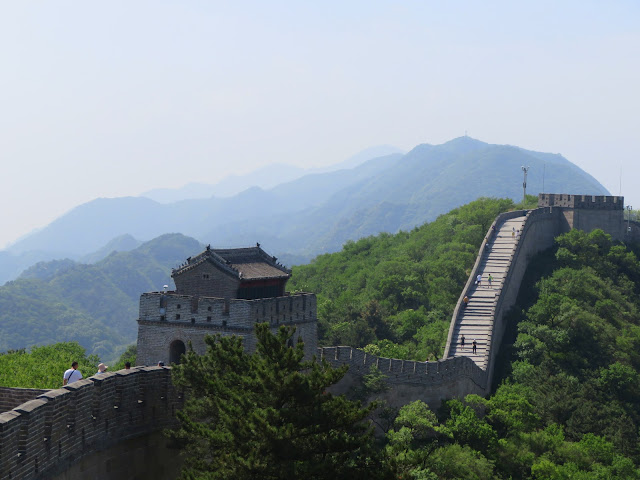 Some steep and uneven sections 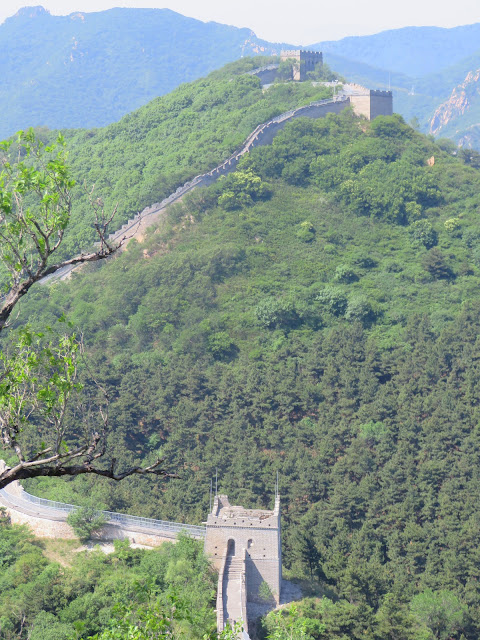 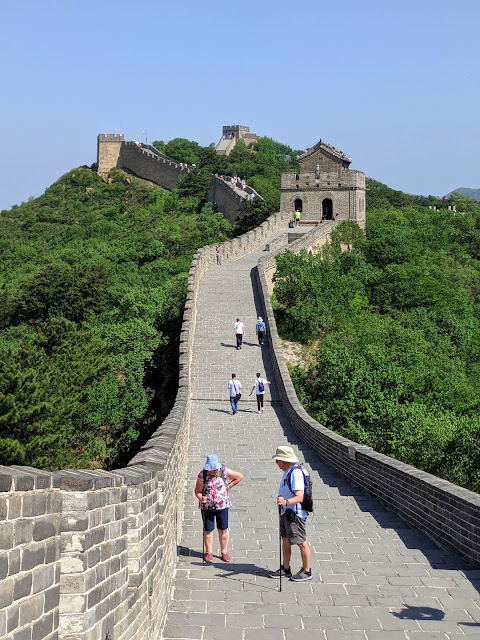 Old geezer and Jennie inspecting something on the wall

In a trip full of highlights and surprises, the Wall was my personal highlight.  I think it was the knowledge of it over the decades and never thinking I'd actually see it which was the clincher, plus the sheer endeavour which mankind is capable of when it sets its mind to achieve something.

Coming back to the parking area, the beautiful topiary was a sight to behold as per the photo below.  Not neglecting my motorcycling friends, I also photographed a motorcycle in the car park.  Most powered 2-wheeled vehicles in China are scooters and virtually all proper motorcycles no bigger than 250cc.  We did see a bunch of large capacity bikes whilst we were heading to the wall, but these may have been tourists from Hong Kong or similar. 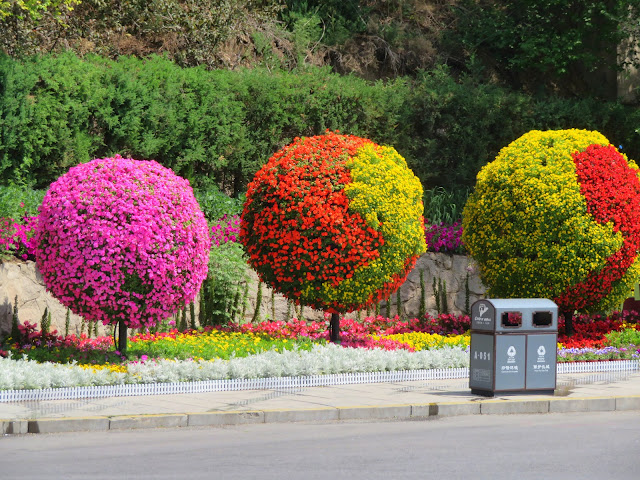 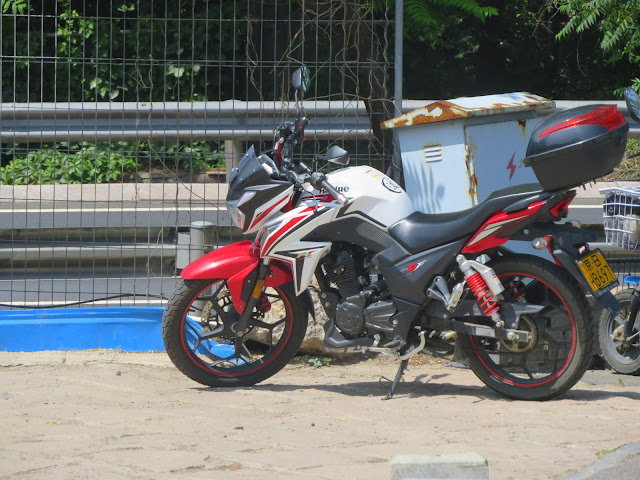 Motorcycle in a Wall car park

Lunch back in Beijing was a delicious multi-course affair accompanied by excellent cold beer and some of the local fire water at 56% alcohol which took your breath away.  Well worth trying though! 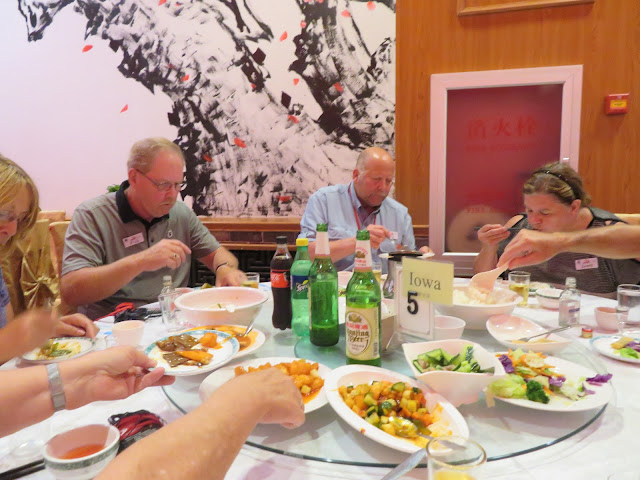 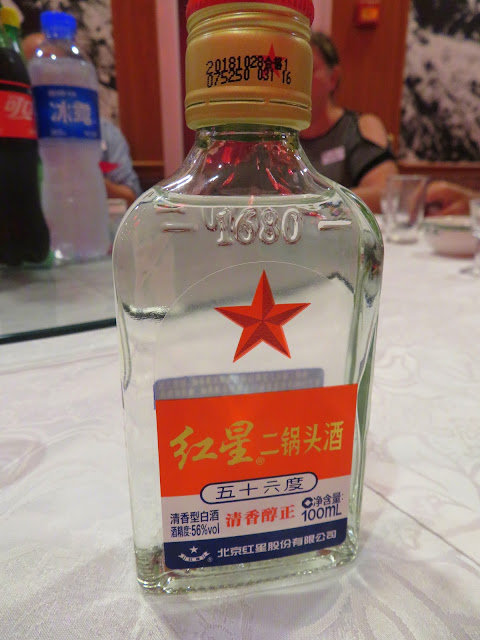 Lethal stuff - down it in one hit, don't sip!

The afternoon was to become a rather expensive exercise with a visit to a jade factory!  Naturally, the bracelet which Jennie fell in love with happened to be top quality jadeite with gold settings.  Must say that the workmanship was exceptional. Hmm..... must get it insured. 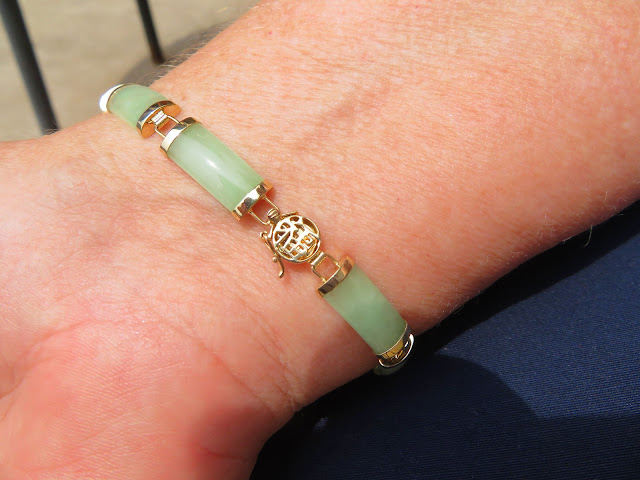 To walk off lunch, we had a stroll down the Ming Tombs Sacred Way, which stretched for nearly 2 kilometres.  Lunch and heat made it a bit of a challenge but it was both picturesque and interesting. 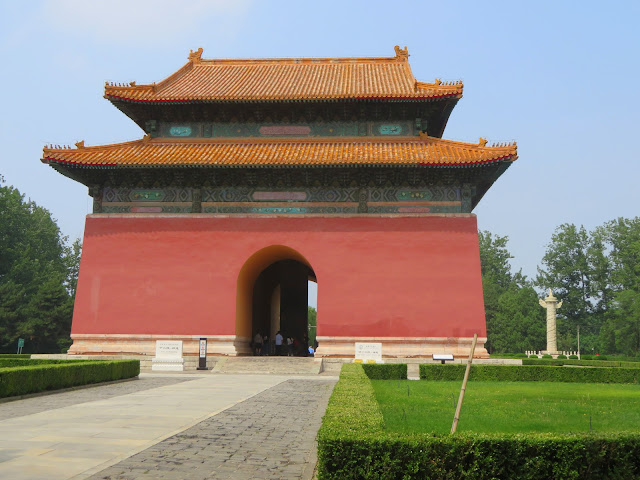 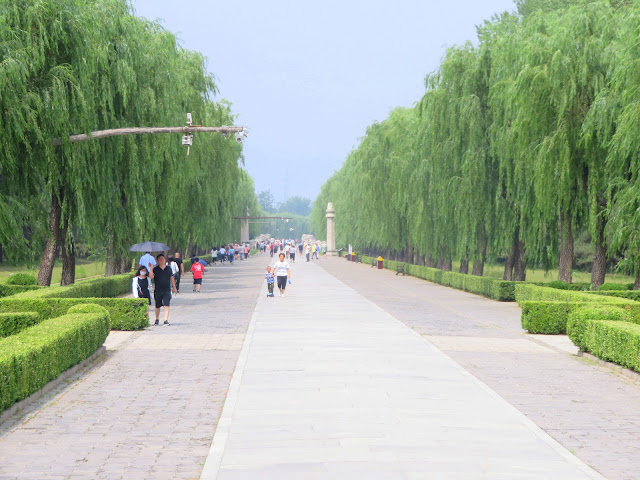 A long haul to the other end 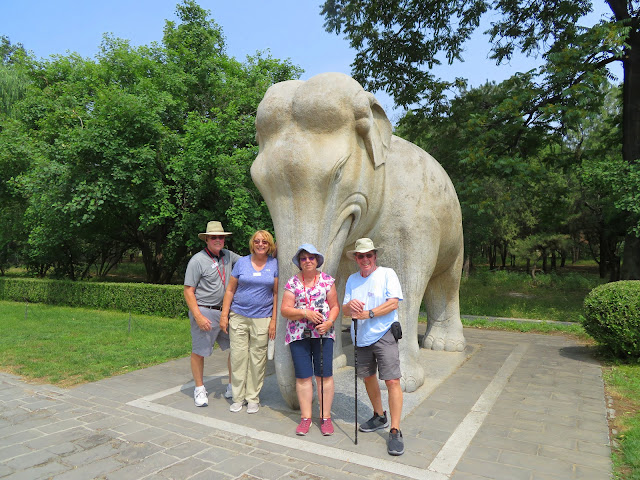 Richard, Kathryn, Jennie and me by one of the many carvings along the Sacred Way

Driving back through Beijing, we went past the Olympic stadium and swimming complex - pretty impressive. 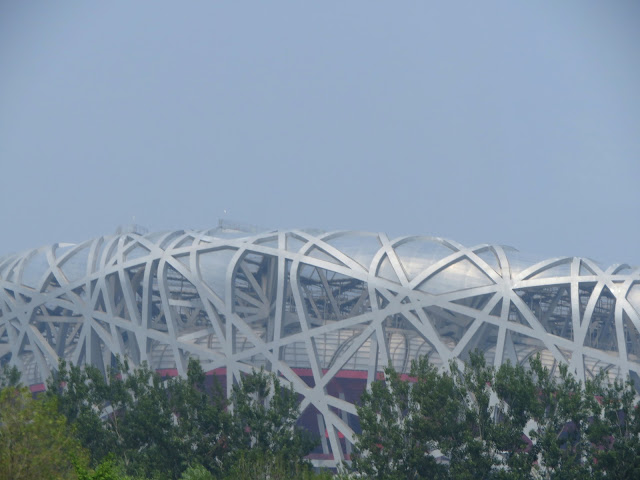 Having missed the rickshaw ride in the Hutong area, Iowa organised a casual walk through this old area of Beijing.  Being old and traditional, the housing isn't grand but it represents a past way of life and it was fascinating.  It seemed somewhat of a clash of old and new with new BMW's and Mercedes parked outside some of the dwellings. 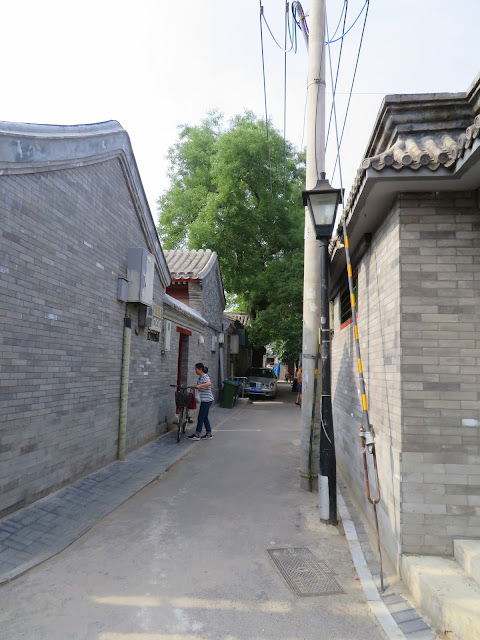 The alleys of the Hutongs 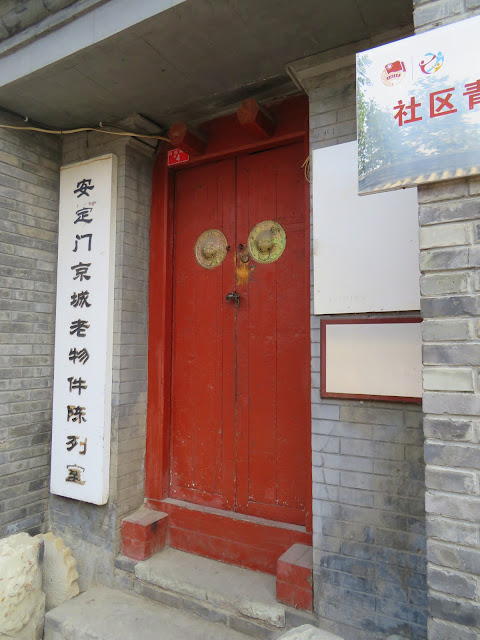 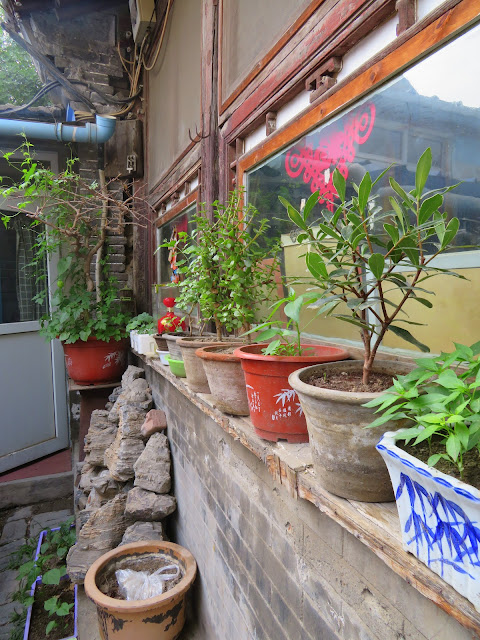 Part of a private courtyard in the Hutongs 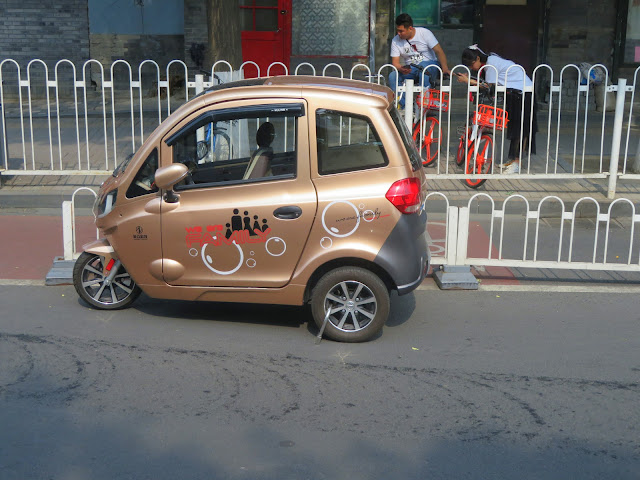 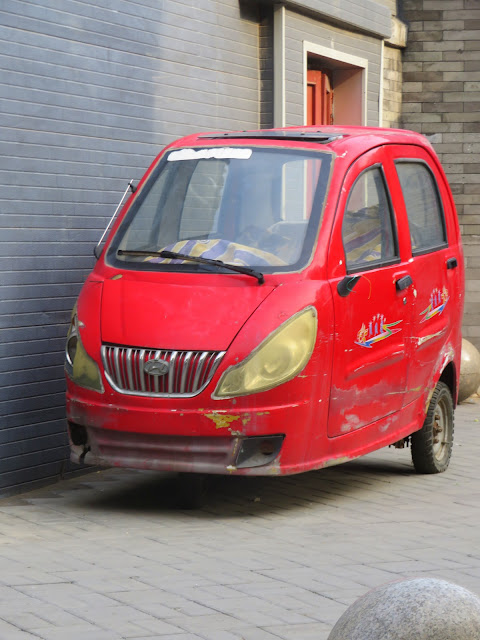 .... and a rather well-used one inside the Hutongs

There was a communal meeting square for the Hutong residents and there were loads of them out enjoying themselves with various activities.  We were fascinated by a woman who had some real skills keeping what looked like an oversized badminton shuttlecock constantly on the move.  I took the following two videos.

A whole heap of fun!

After walking a pretty substantial distance during the day, we stopped to have a tea demonstration - how to make it and tasting various teas.  I must say that there was a huge variation in taste, most of them being delicious and refreshing.  The young woman who gave the demonstration was great fun.  She picked on about three of us regarding age, waistline and ummmm..... stamina, suggesting that proper Chinese tea would transform us!  Much hilarity from wives and the rest of the group! 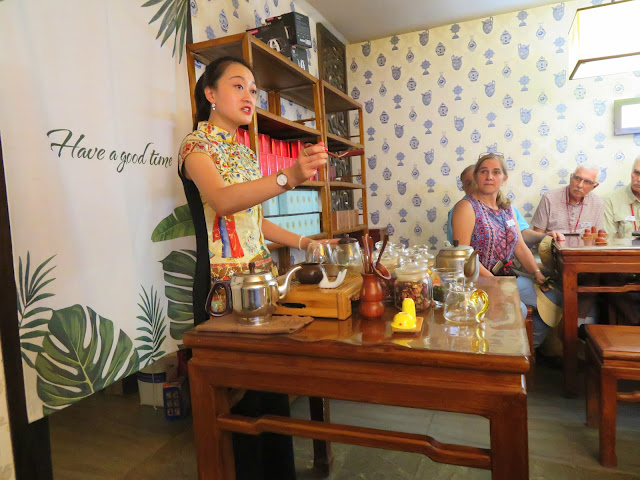 The day wasn't quite finished and some of us headed out that evening for a traditional wood-roasted Peking Duck dinner prepared in the traditional way which was utterly delicious.  Some tired and well-fed people tumbled into bed that night! 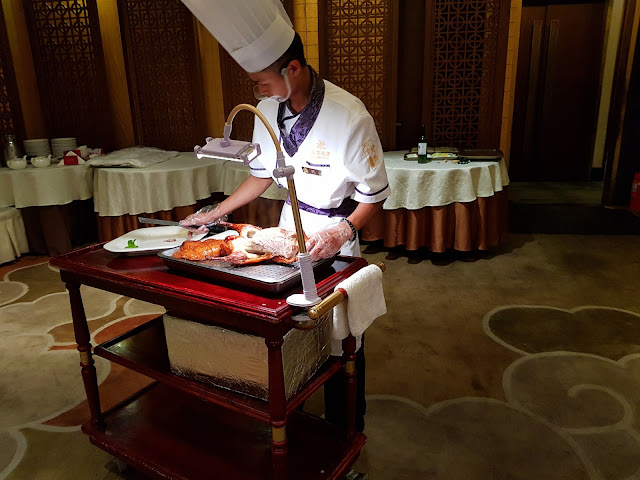 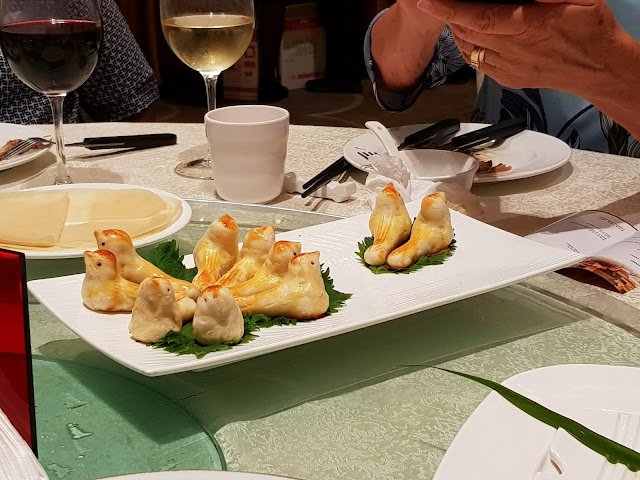 Next - Beijing, Tiananmen Square and the Forbidden City