Travels in the Land of the Dragon, pt 8 (final)

If you've managed to wade through all the previous posts, congratulations on your stamina!  It's been great to re-live the trip by writing this and editing the 800-odd photos taken as it helps to cement it in our minds as everything was so full-on at the time.

Flying from Beijing to Hong Kong was only a bit over 3 hours and we arrived to high temperatures and crippling humidity.  We were staying at the Park Hotel in Kowloon, right amongst the shops and restaurants.  The Park isn't to the standard of the hotels we stayed at on the Chinese mainland but is nonetheless well-appointed and comfortable.  The staff were excellent and the dining room for both breakfast and dinner was superb.

During the last part of the China trip, we'd both developed coughs and colds so the plan was to take things a little easier.  Ha!  The best-laid plans.....

A Kiwi friend of ours (thanks Bruce!) had lived in HK for 3 years and before we left, had given us a great guide of things to do and see.  The weather forecast (high temperatures, low cloud and heavy showers) affected our plans but we were able to hire a guide (Rex) to show us the sights, some well-known and others less so which provided a great mix. 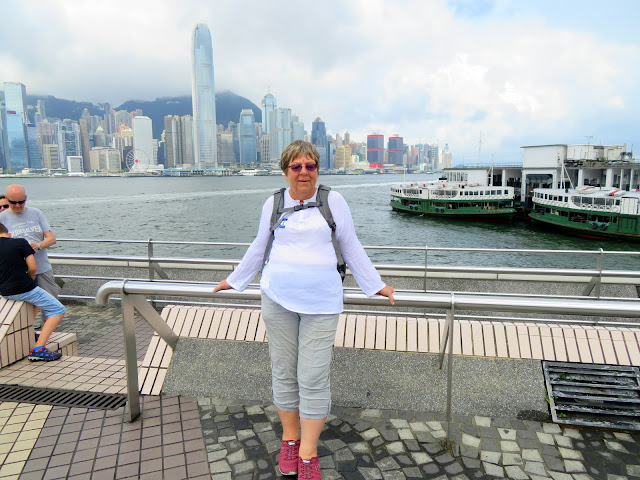 Note Jennie's light cotton top, she's a sight smarter than me.  I wore a lightweight travel shirt which was darker in colour.  With the humidity and heat, we were both soaked with sweat in minutes. Jennie looked as fresh as a daisy throughout and I looked like someone had chucked a bucket of water over me.  (Ok, dangerous mistake on my part - ladies don't sweat, they glow, sigh....).  By the way, the observation/ferris wheel across the harbour is 60 metres tall, just to give an idea of scale. 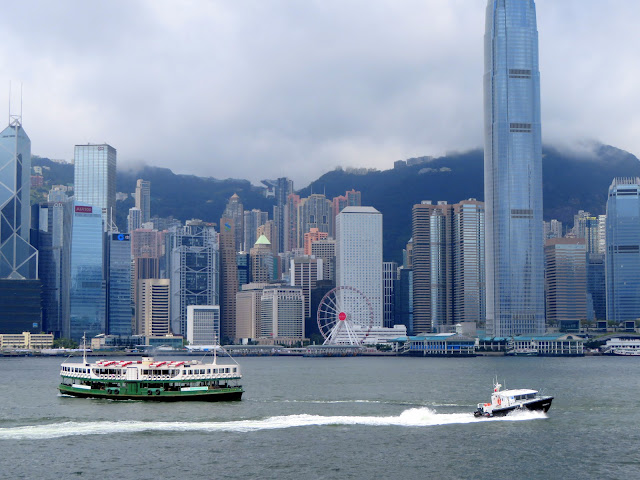 The observation/Ferris wheel is 60 metres high and the International Commerce Building on the right is 484 metres and apparently the 9th highest building in the world.  No charge for these fascinating facts.  We crossed the harbour on one of the ferries shown in the photo which only took a few minutes. 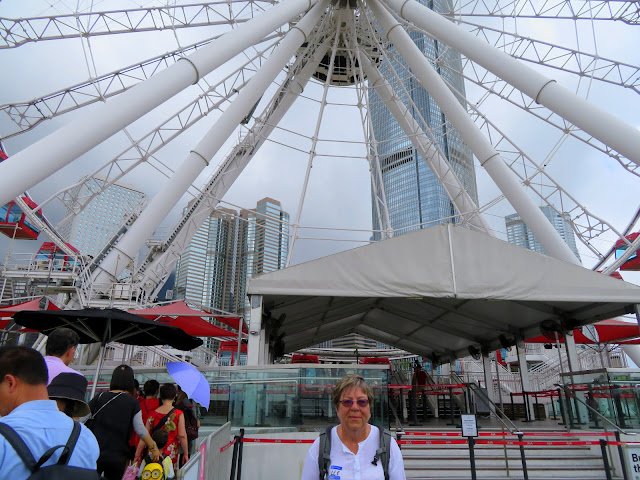 About to get on the Ferris wheel 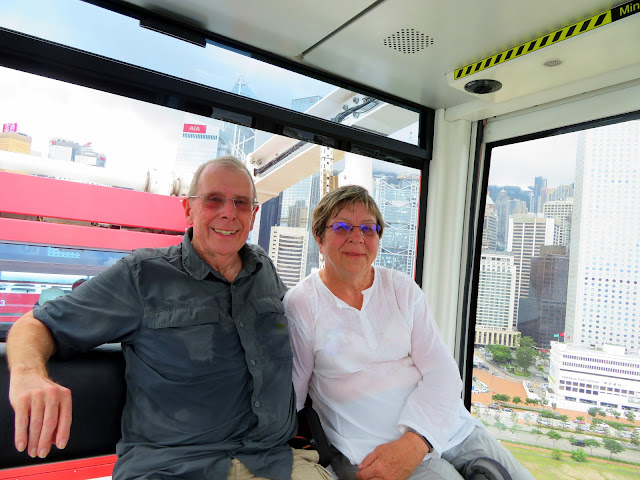 Jennie looking fabulous, me looking like I've fallen in the harbour 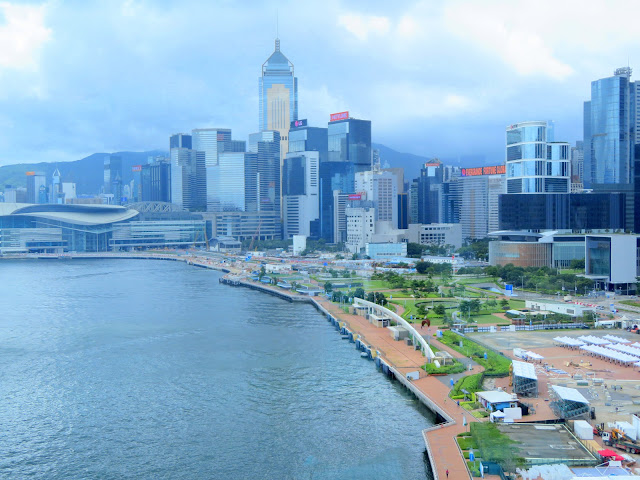 Great views from on high

At the start of the tour, we were under the distinct impression that our tour consisted of mainly motorised transport as Rex rattled off the words, ferry, open-top bus and tram.  These were merely short connectors to what was essentially a walking tour covering several kilometres in sweltering conditions.  Our plans to take it easy were rapidly coming off the rails.  Oh dear......

Next stage was a trip on an open deck bus for half a dozen stops to the next part of the walk.  At least the breeze sitting up top helped dry my shirt out in readiness for being soaked again. 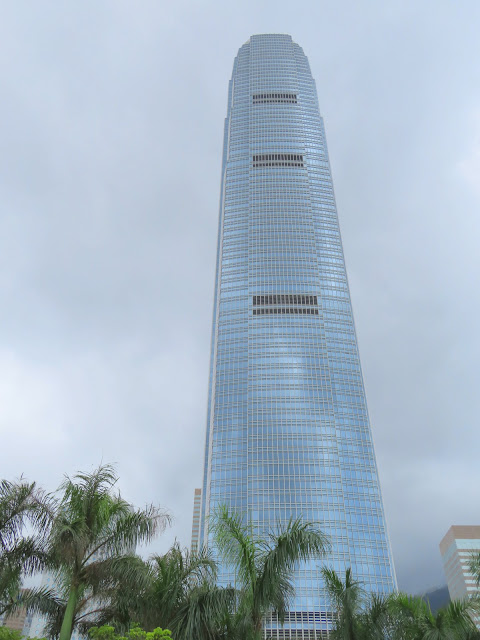 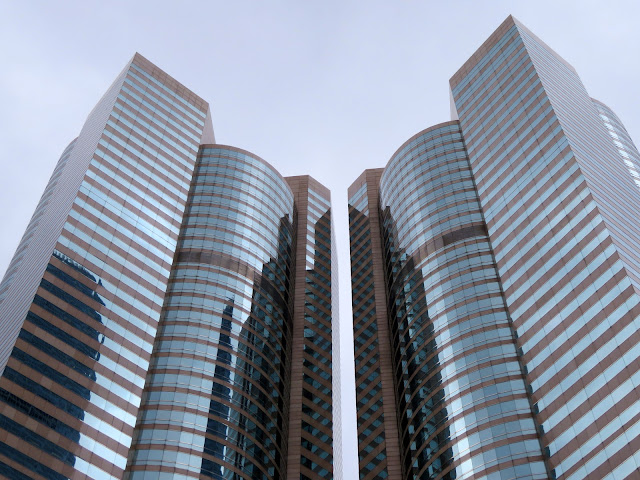 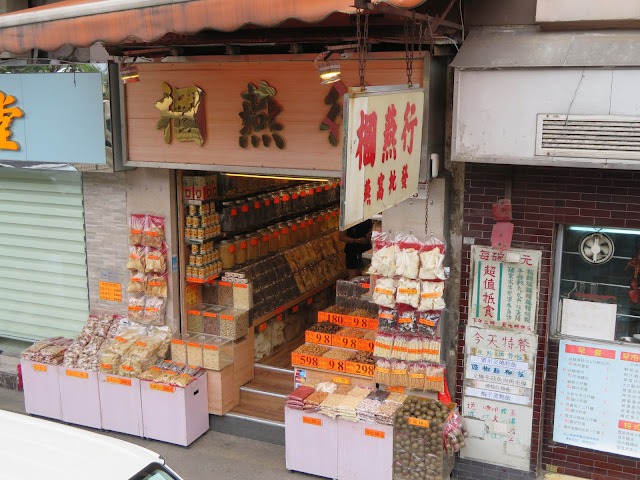 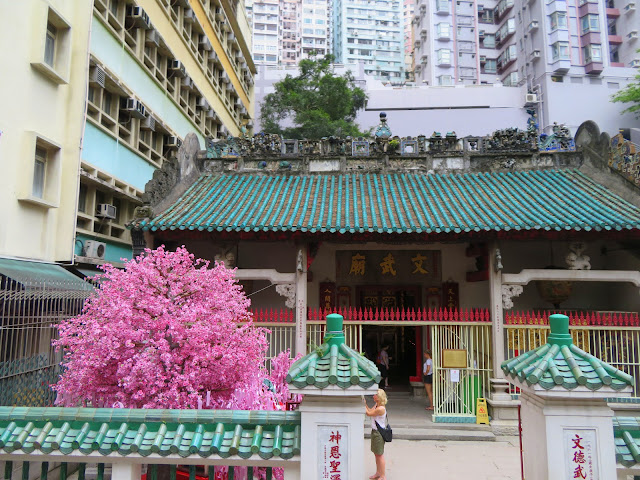 Lovely blossom in a courtyard 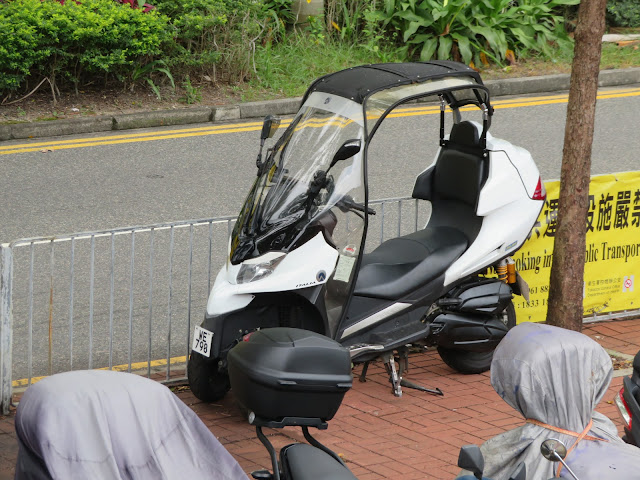 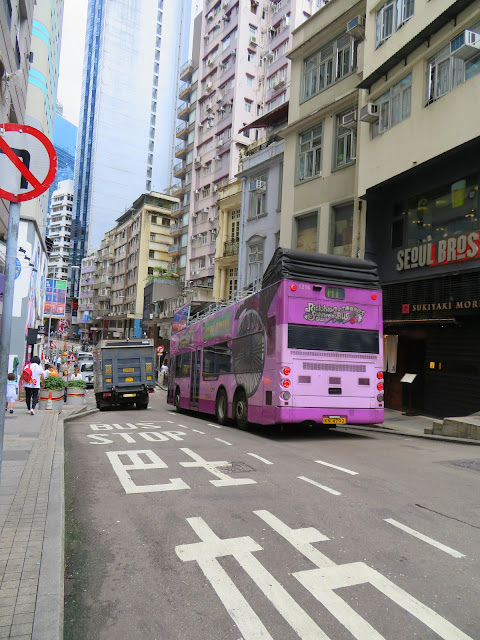 Bye bye bus - back on foot 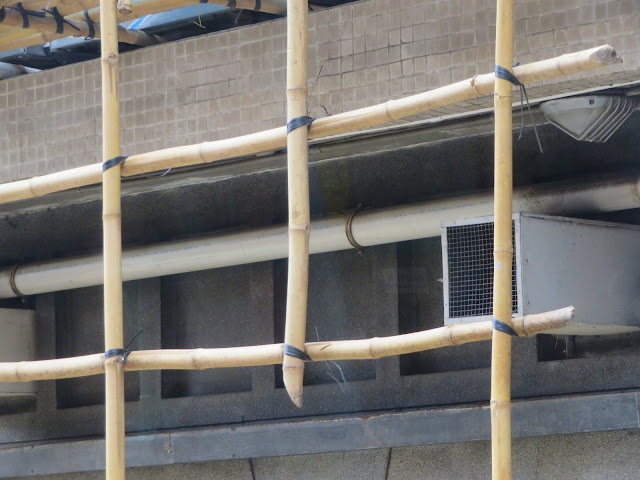 Traditional bamboo scaffolding - not much in the way of lashings!

Our guide Rex, thought we might to see something a little different from routine sightseeing, which is how we ended up at the old Police Married Quarters (PMQ)!  Originally opened in 1951 to provide accommodation for an increase in police numbers, the small multi storey apartments often housed large families.   One example had 9 family members living in an apartment of 350 sq ft!  Beds were tiered or simple fold-away mattresses and cooking and meals were often done on the balconies outside the apartments. 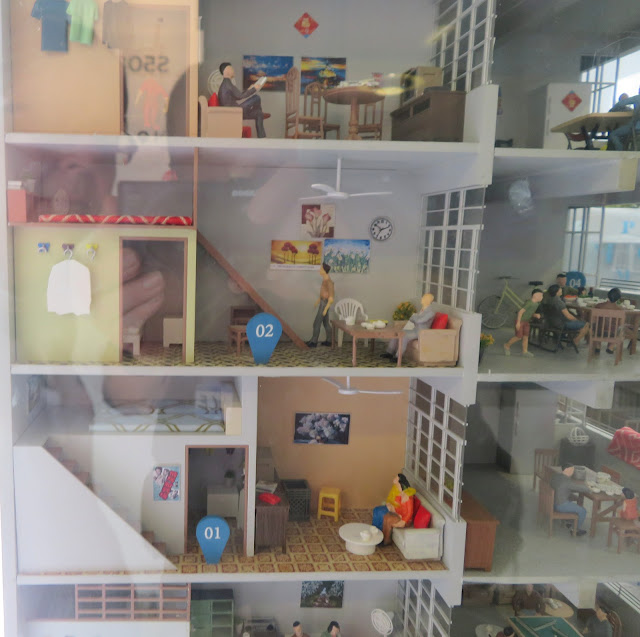 In 2014, the building was re-purposed and turned into studio workshops for creative young designers and the like at attractive rents. We wandered round several floors and these designers and artisans were producing some impressive art objects, jewellery, paintings and so on. 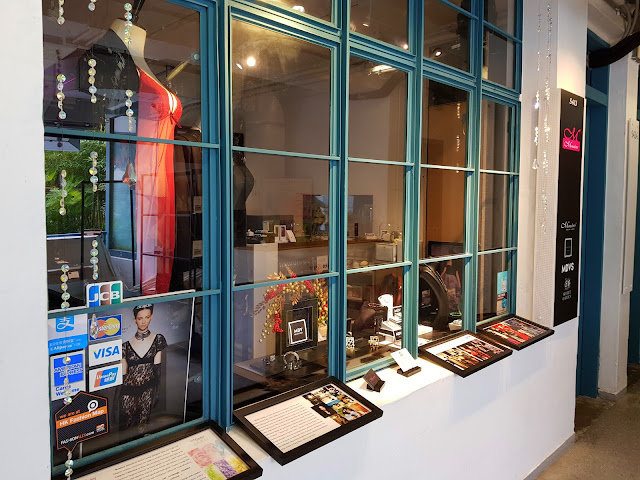 Apartment converted into a designer store 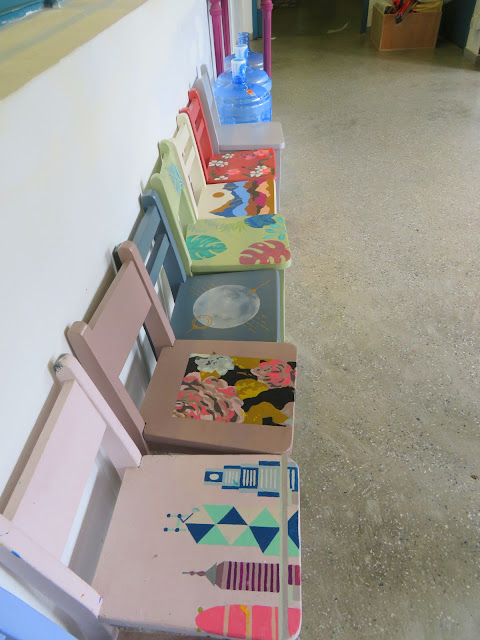 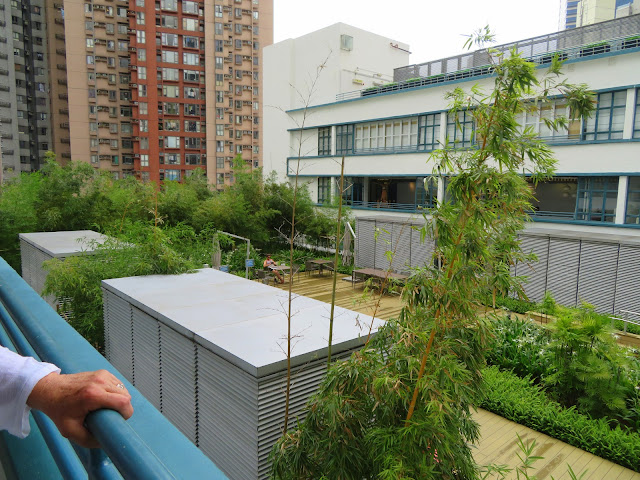 Nice place to chill between the two apartment blocks 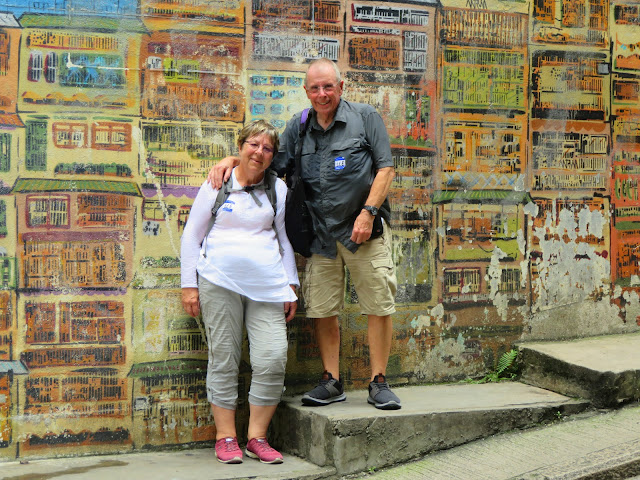 A painted "graffiti" wall on one of the side streets

Next spot was a stroll round the old central police station, jail and courthouse.  Part of the complex dates back to 1864.  It's been renovated with part of it showing what the jail was like, plus cafes and restaurants. 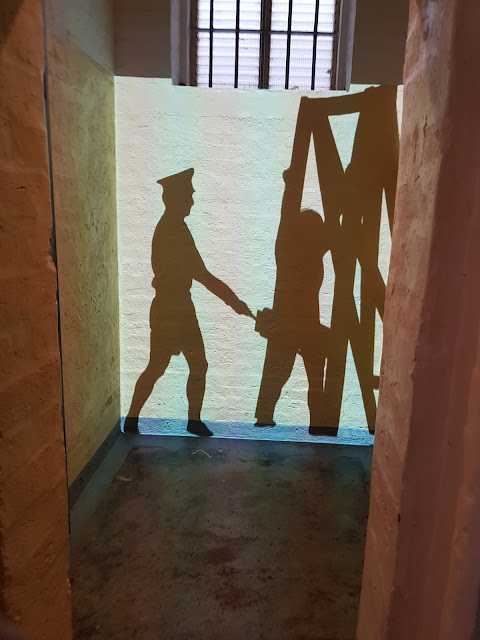 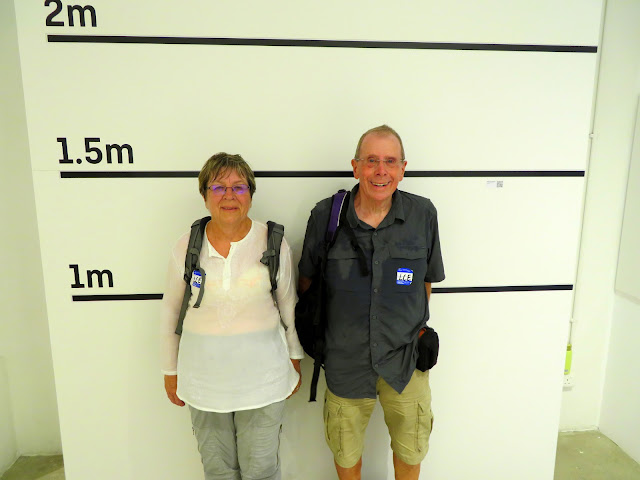 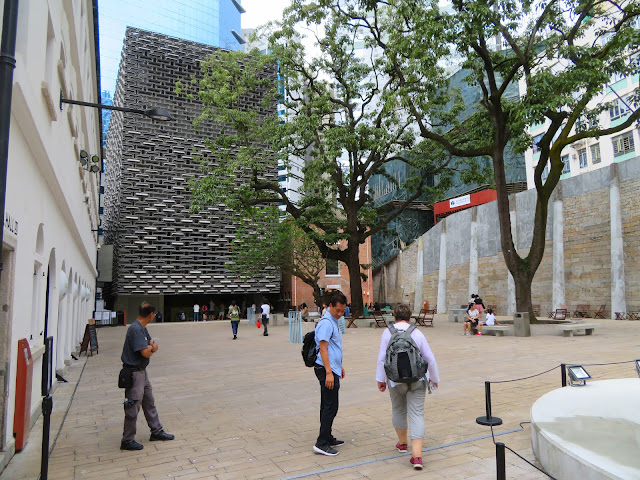 What was once an exercise yard for prisoners

We were rather taken by the tree at the far end of the photo above.  Although they can't be seen in the photo, it had gorgeous pink flowers.  A plaque said that it was Plumeria Rubra or Red Frangipani, native to Central and South America. Really attractive. 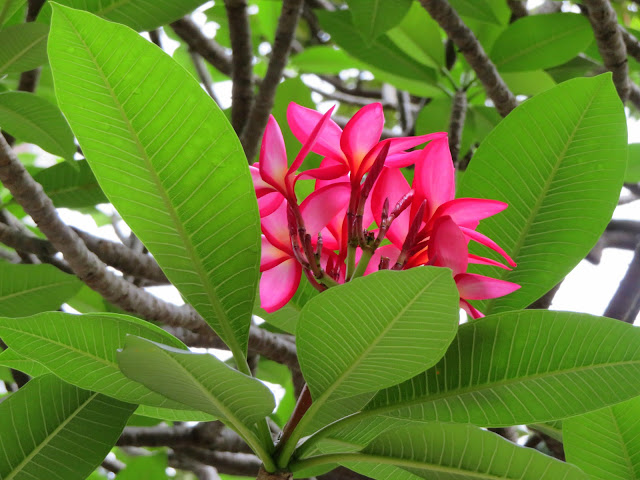 We were becoming rather footsore with the slog in such taxing conditions but thoroughly enjoying diving in and out of the lanes and alleyways.  Next stop was Pottinger Street, extremely steep with uneven cobblestones.  Bad enough in dry conditions but would be really tricky when it's wet.  There are market stalls towards the bottom which Jennie took advantage of for a bit of shopping. 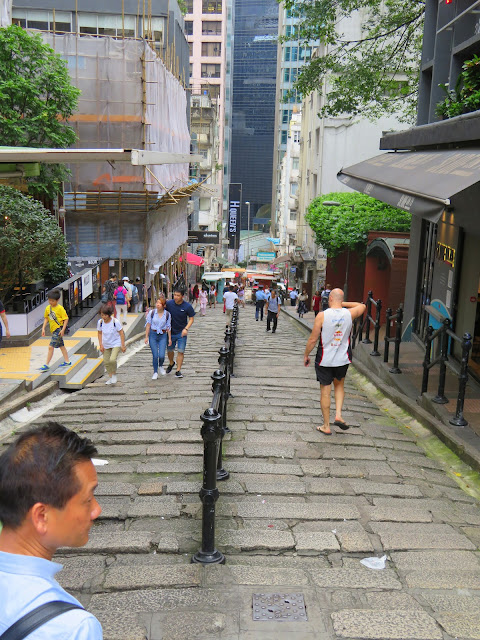 Steeper than it looks


After a bit of shopping, we hopped on one of HK's famous trams to get us to a place where we could have some afternoon tea. 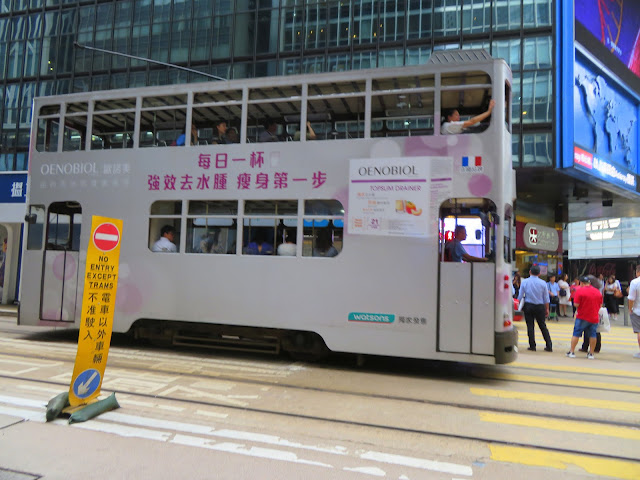 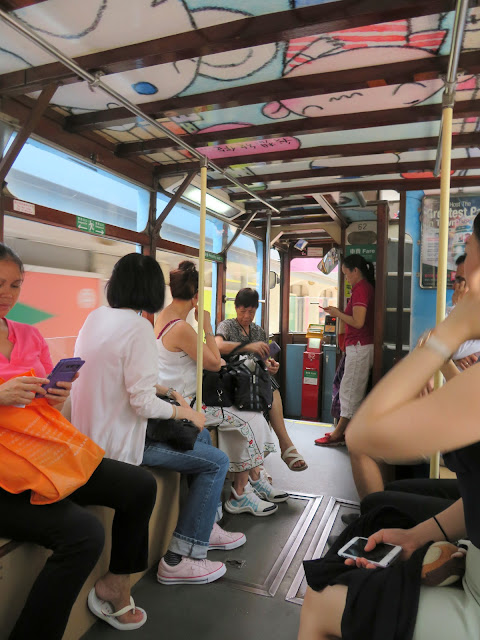 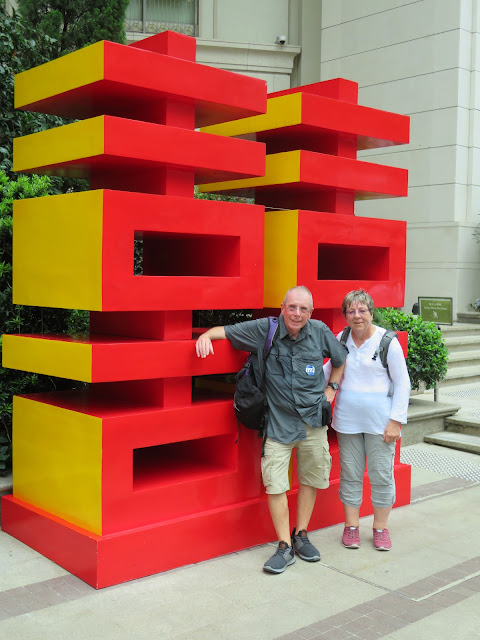 Rex lead us to the tea rooms which were at the top of some narrow and winding stairs and said his goodbyes after showing us where to find the nearest underground station (The MTR) which would take us back under the harbour close to our hotel.  Really enjoyed his company. 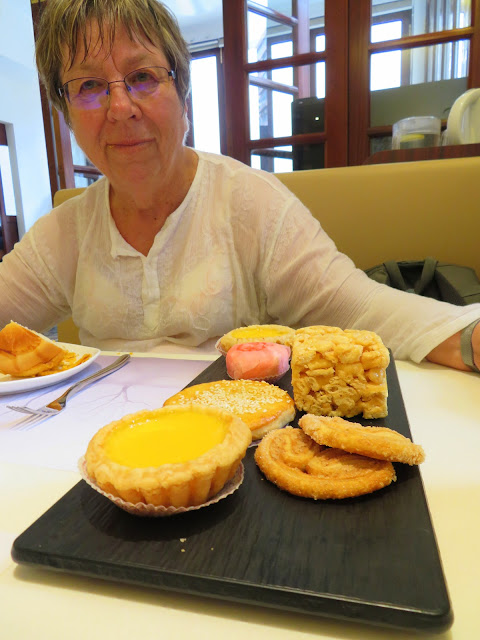 A delicious selection of cakes for afternoon tea 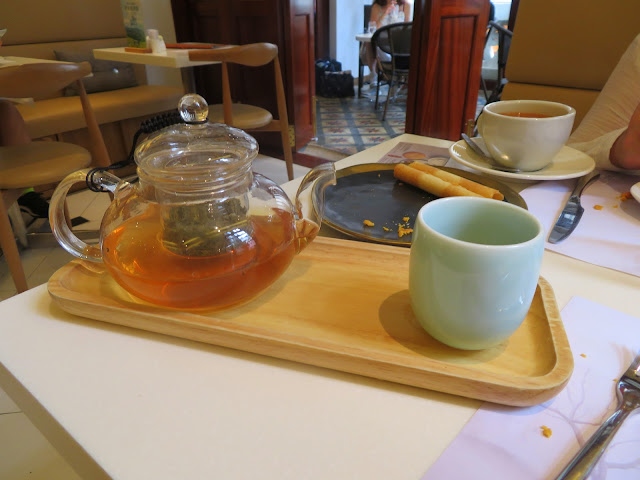 Negotiating the MTR including changing trains was incredibly easy with good signage and trains departing every couple of minutes.  Why can't every country be that good?

The other thing which was really noticeable was the sheer number of supercars in the streets - Lamborghini, Maserati, Porsche and so on.  Given that they would rarely get out of first gear, status was clearly the main objective.  Of all the high end cars, the Tesla electric brand had a significant presence.  Far more practical for Hong Kong conditions, I would have thought.

We had the best part of another day in HK but with our sniffles and with it pouring with rain, we decided to chill in the hotel before heading for the airport in the middle of an electrical storm.  Fortunately, our flight departed on time and we were able to lie flat and get some reasonable shuteye before landing in Auckland some 11 hours later.

A wonderful holiday full of surprises and meeting lovely people.  Wonder what's next?