Travels in the Land of the Dragon, pt 4

Moored in Shibaozhai overnight, the day was supposed to start with a walk to a temple on the waterfront.  As it was hot and humid, the decent walk followed by a climb of several flights of steep stairs inside the temple didn't have much appeal.  Jennie and I opted to chill on the sun deck for a couple of hours instead.

The photo below taken through a telephoto lens shows the temple.  It has 9 floors and was built in 1819. (without nails, I understand).  No charge for this rivetting information - pun intended!).  The wall in front of the temple was built to protect from the rise in water level above the Three Gorges Dam.  Depending on the season and water needs, the level can rise a further 10 metres or thereabouts compared with that in the photo.  Extensive walling and levees can be seen all along the Yangtze to compensate for varying water levels. 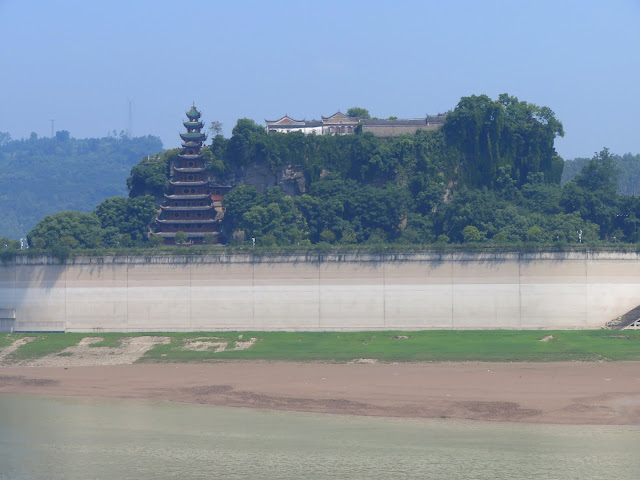 Whilst we were chilling on the sundeck, we noticed that some of the town residents were doing their laundry in the traditional manner at the bottom of some steps where the ship's passengers disembarked.  We were a little puzzled as it was a good 800 metres to the start of town and presumably, the dwellings either had running water or there was a closer water source.  Most likely, it was a tradition and/or an occasion to socialise with friends.  We hoped they weren't contracted to do the passenger laundry given that the clothes were taking quite a beating on the stone steps!! 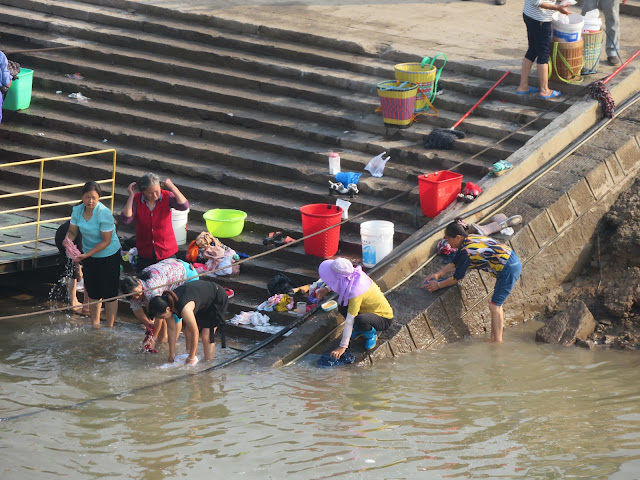 Laundry day - silt in the water replaces the need for starch 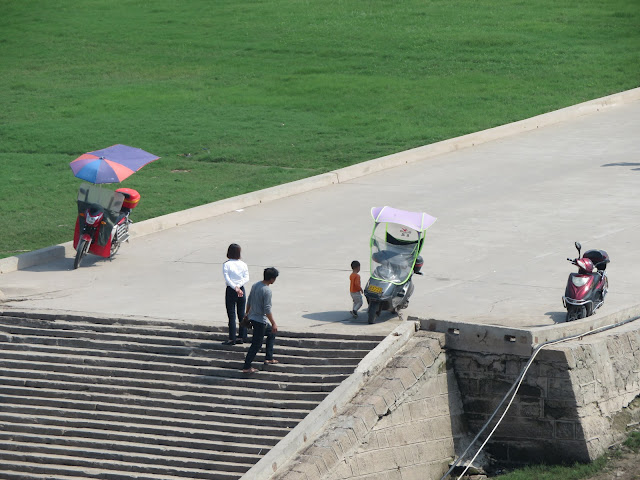 Covered scooters at the top of the steps - might take to the skies in a strong breeze!

Continuing upstream, it was interesting to see activity on the banks of the Yangtze and some of the new cities which had been built to house residents displaced by the power project.  The cities were mainly high density high rise buildings.  How the locals who previously had a more rural environment coped with the move is unknown and cultural differences between East and West might also affect perceptions.  The new cities, whilst not my style of living, looked well-designed. 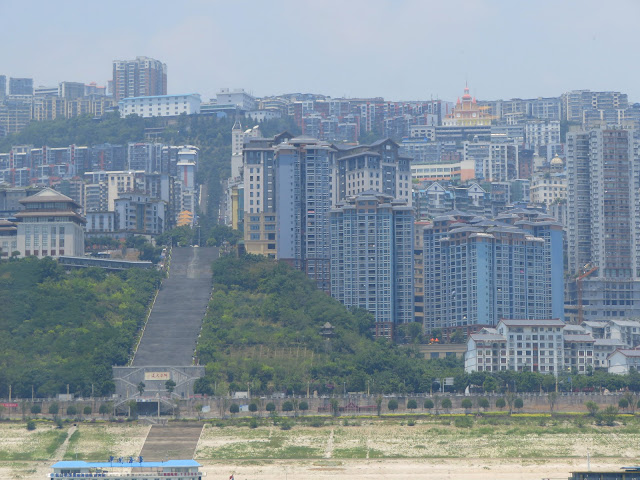 One of the new cities along the Yangtze 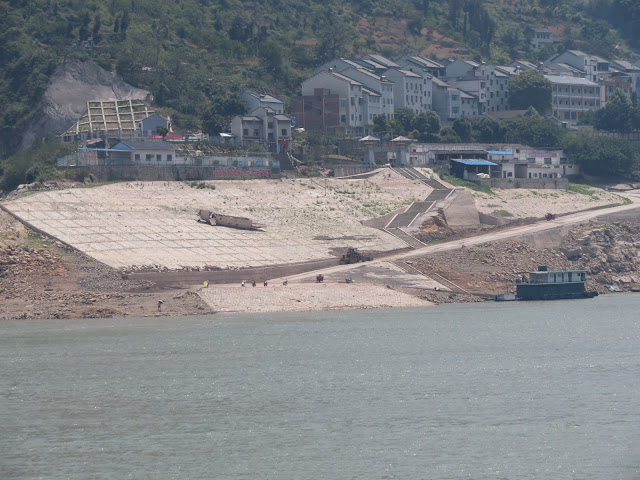 We couldn't tell whether the ship in the following photo was being built from scratch or whether it was being refurbished.  However, its position relative to the current water level gives some idea of the variation in levels upstream of the Three Gorges Dam. Maybe the vessel is in the backyard of someone called Noah. 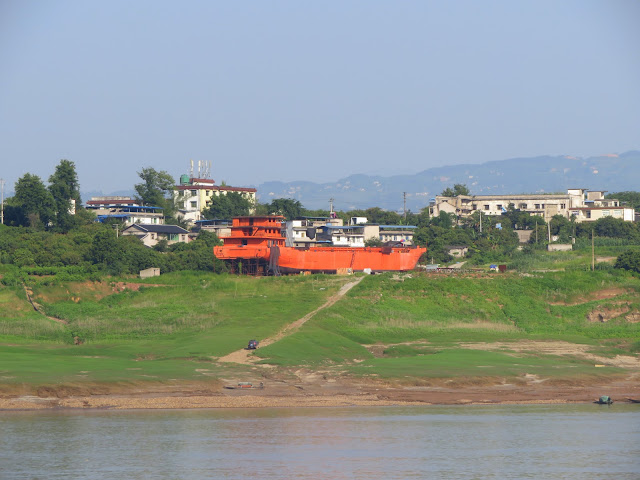 We have a boat in our yard too but not not quite the size of this one!

Just outside one of the cities, I noticed 5 river cruise boats rafted up together which made for a reasonably arty shot.  They looked in poor condition so were either waiting for refurbishment or scrapping.  Amazing how the Yangtze reveals all sorts of interesting things along its length. 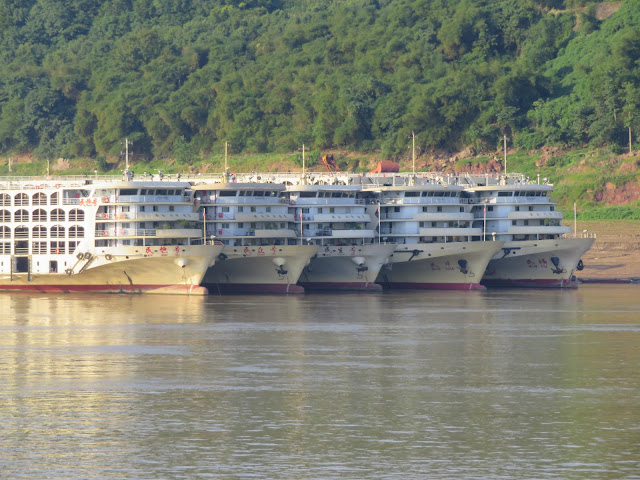 Anyone fancy a boat for a weekend cruise with the family and assorted hangers-on? 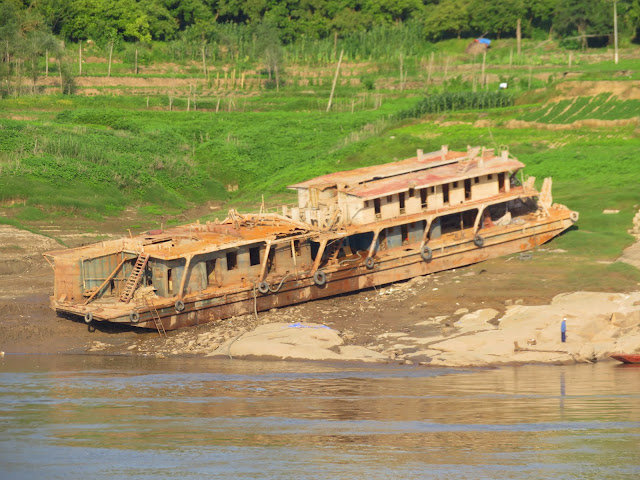 One careful owner, in need of a small tidy.  Offers welcomed.... 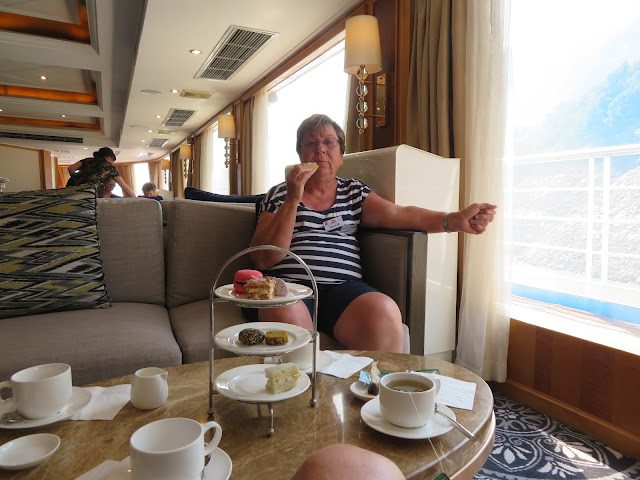 Jennie, enjoying high tea on board - a genteel moment


Whilst on the subject of food, the next picture is of a mousse dessert served on board one evening - exquisite. 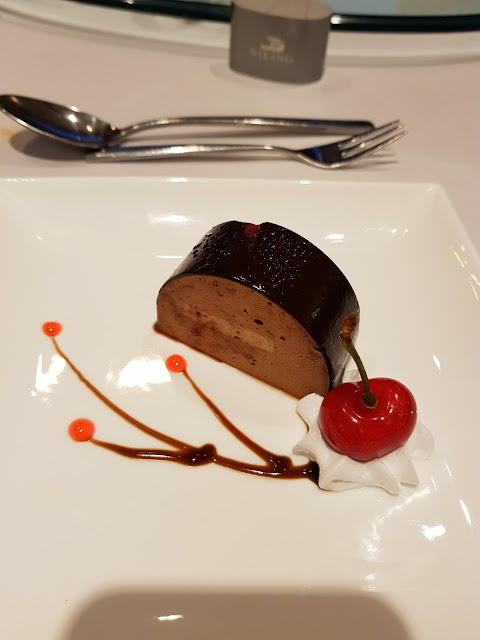 Almost too good to eat! 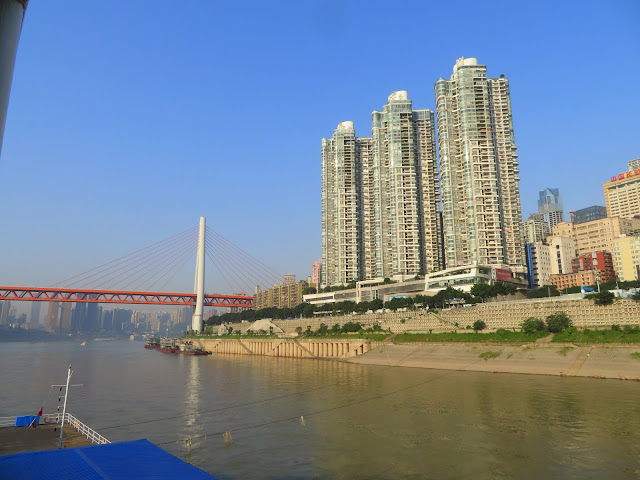 Chongqing, where our Yangtze journey stops

Chongqing is where General "Vinegar Joe" Stillwell and Lee Chennault were based in WW2 with the Flying Tigers P40 squadron.  Famous for the sharks mouth painted on the engine cowling and much-copied later; it had personal significance for me.  This was because in my young teens, I still remember that a P40 in Flying Tigers livery was one of the first plastic model kits I ever made. How about that for a useless bit of trivia?
The photo below shows the floating pontoon which we used to disembark and begin the next stage of our vacation.  It was fascinating to watch the porters carry our luggage ashore.  Many had sturdy bamboo poles over one shoulder to which cases at each end were tied.  We had visions of both cases and porter disappearing into the water never to be seen again! 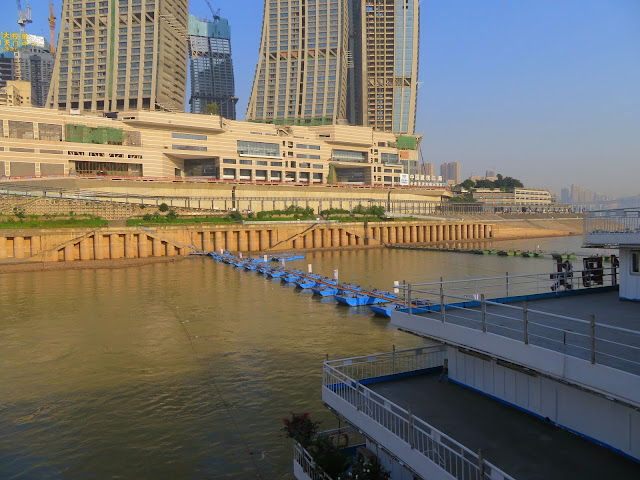 Getting ready to disembark


Before our flight north, there was time to visit the zoo and see the world famous pandas.  Leaving early gave us time to see them before crowds built up and before it got too hot.  We were lucky to arrive at feeding time. 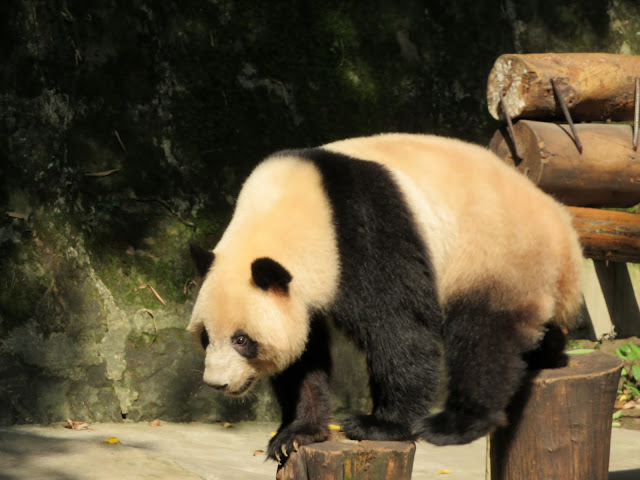 First time seeing one in the flesh 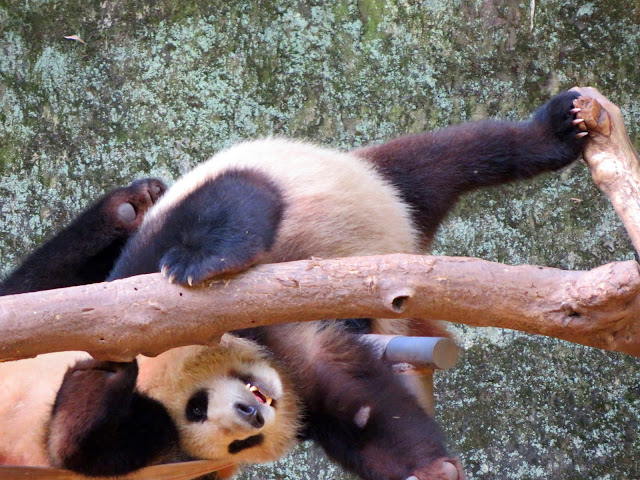 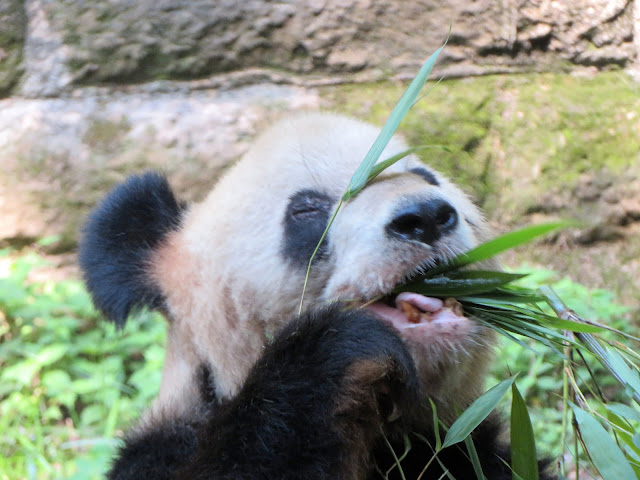 Fascinating to watch them manipulate the bamboo 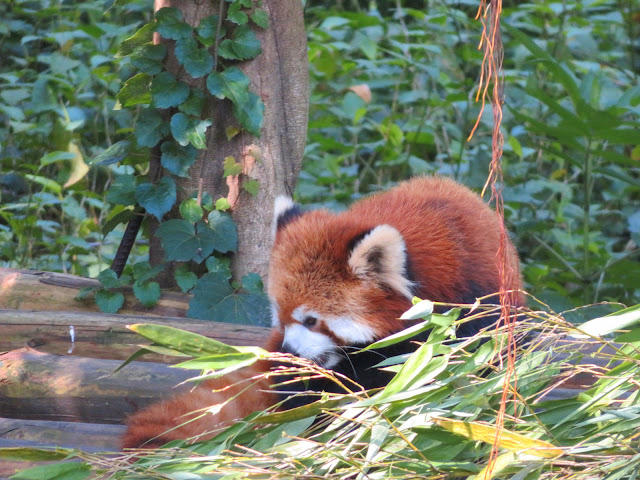 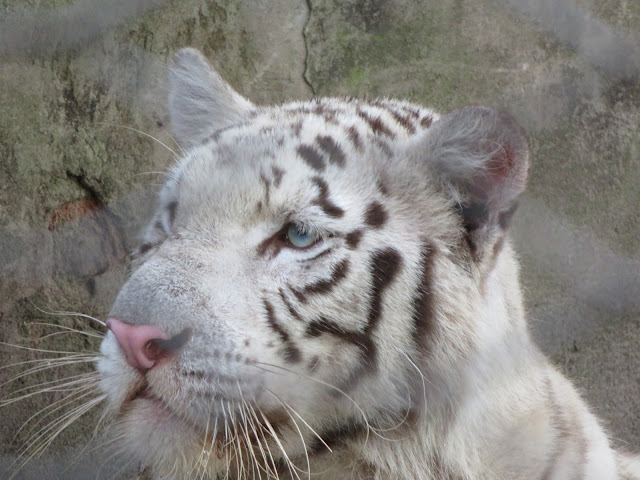 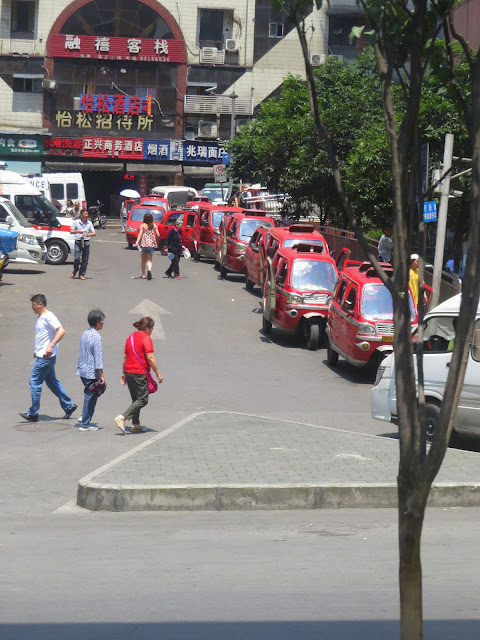 A gaggle of 3-wheeler taxis 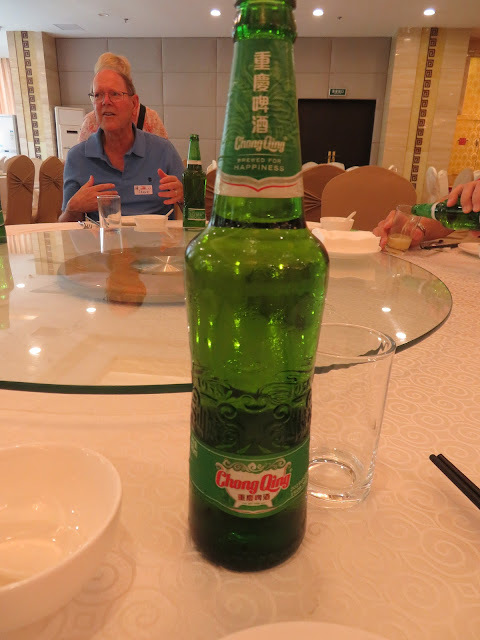 Beer at lunch - excellent throughout China


After lunch and before our next flight, we visited a local market which was quite a sight.  I'll spare the more squeamish readers seeing raw meat on hooks in high temperatures or live frogs waiting to be consumed.  However, the vegetables and spices made a nice display. 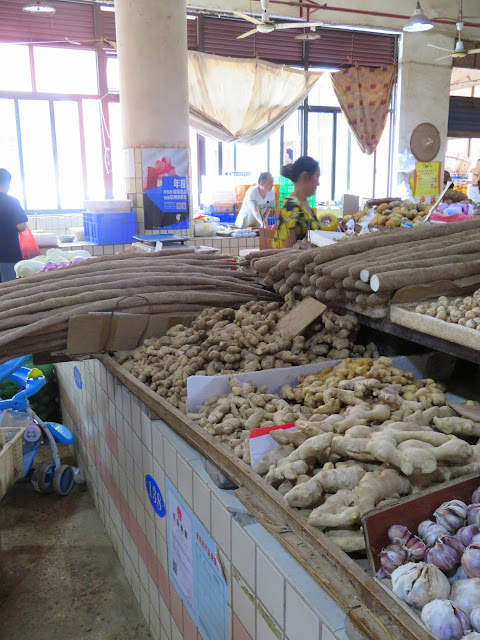 Veggies - some familiar, some not 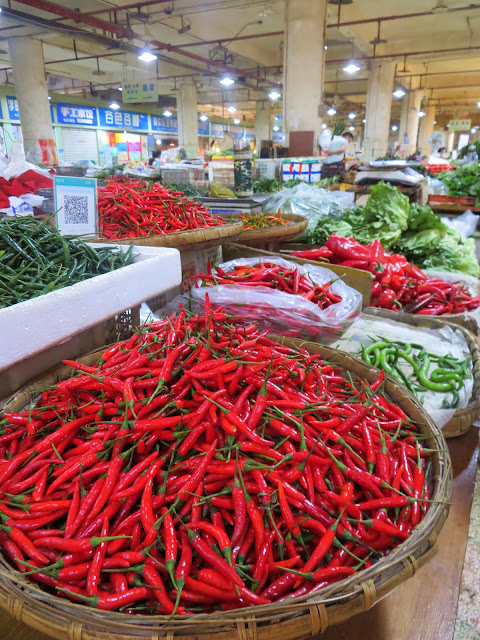 Something to bring colour to your cheeks

Outside the market was a police kiosk, with what I took to be a small police electric vehicle.  Its low speed capability suggested that it was mainly used for issuing parking infringements or fining senior citizens with walking frames for impeding traffic.  Nevertheless, I took a photo as it was being diligently guarded by Officer Cat.  No doubt, produce from the market formed the remuneration for his diligence. 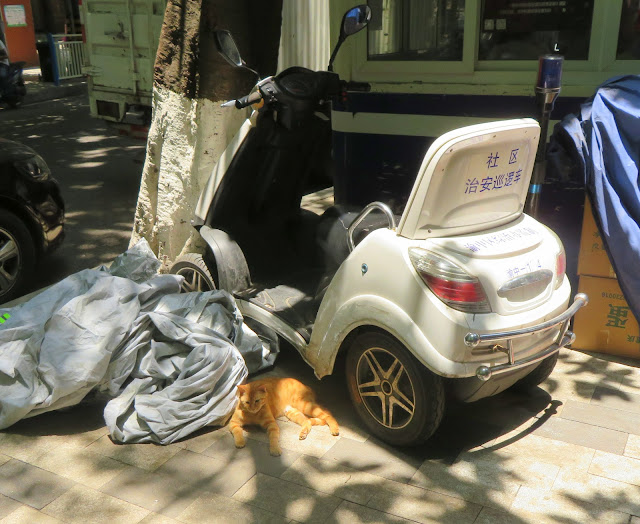 We've come to the end of our Yangtze cruise and enjoyed every minute of it.  Fantastic sights, a new culture, making new friends, the exemplary service by the crew of Viking Emerald.  Hopefully, that's abundantly clear from remarks in the previous blog posts and it won't be forgotten in a hurry.  Now it's time to catch another internal flight to start the land-based part of our vacation.

Next Xi'an and the Terracotta Warriors
Posted by Geoff James at 14:42