For most of my riding years, I've stuck with stock suspension, and probably much of it was with tired units because as young 'un with not much money to throw about, most of the early bikes were second hand or worse.  Still, you don't know what you don't know so you ride to the best of your ability and if it wallows like a pig on corners, produces the odd tankslapper or bottoms out on savage bumps in the road; it's all part of riding a motorcycle eh?  If there was any surplus cash to throw about, it always seemed to be spent on bling, farkles - call them what you will.  OK for "pose" value but probably with little impact on performance!

Owning a Honda Blackbird was where I started to really wonder about a suspension upgrade. A fantastic bike in virtually every respect. Trouble is, some of my mates had pure sports bikes and once we got into the tight stuff with uneven surfaces, trying to stay in touch on a fast ride required so much physical work wrestling the heavy old girl through the bends that it was like doing a full aerobics workout at the same time, not to mention the odd fright from pushing the boundaries.  Raising the rear ride height to sharpen the steering helped quite a bit but by 50,000-odd km, the standard shock was definitely past its best.

It was more or less at this time when I read an article on checking sag and found that both the standard front and rear suspension had significantly greater sag than the recommended values.  This wasn't really a surprise given comments I'd seen on various Blackbird websites about the relatively budget standard suspension.  I did think about replacing the rear shock with a new standard unit but one of the American 'bird sites was organising a group buy of Penske units through Cogent Dynamics Motosport in North Carolina.  From a bit of research, it appeared that the Penske brand was pretty much on par performance-wise with Ohlins albeit less expensive; particularly with the group buy discount. The owners of Cogent, Rick and Joyce Tannenbaum; were a joy to deal with and very exacting in getting details of my weight, riding habits and road types so that they could spring and valve it to my specific needs.  Most impressed with the specification but still some reservations at this stage as to whether an average rider like me would really notice much difference in improved damping control and  a custom spring.

At least it took care of my birthday present from Jennie and she even had the grace not to ask how much it was going to cost - phew!

The 8983 Penske rear shock duly arrived what a beauty!  Rose joints top and bottom to reduce friction and alignment issues, with a remote compression damping reservoir for easy adjustment.  Also a comprehensive manual for set-up and maintenance.  All I did prior to fitting it was to increase the length by 8mm to match the ride height spacer previously used with the OEM shock and fitting took less than 2 hours. 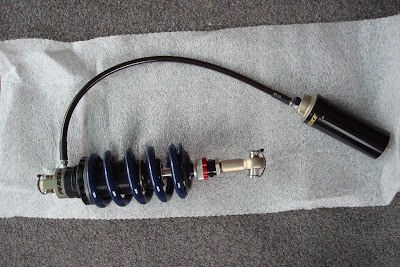 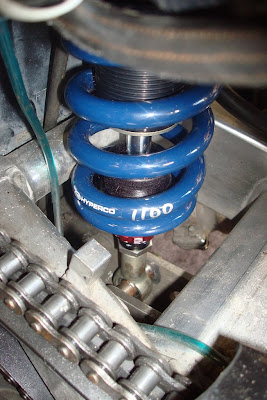 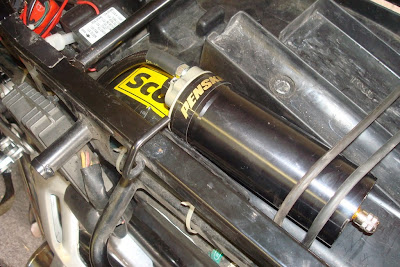 Before heading out on the first test ride, sag was checked and it sat right in the recommended range, so the temptation to fiddle was resisted!  I know every bump and corner on my favourite racetrack (errr... sorry, favourite public highway) and the new shock was an absolute revelation.  There are bad truck ripples on one of the bends which threw the 'bird badly off line at speed with the old suspension and with the new rear shock, it just about completely evened them out with the superior damping - incredible!  What this also meant was that corner entry and exit speeds could be higher with no greater effort and with better levels of control.  Similar advantages were apparent on straight roads with poor surfaces - bumps and other annoyances were hardly noticeable.

However, the downside of having a top drawer rear shock was that it exposed the stock Blackbird front end for what it was - grossly under-sprung and probably under-damped. Wasn't game to push my luck with my Chief Financial Manager for a full rebuild so settled for some longer, heavier rate springs and shorter spacers from the UK. A piece of cake to install and what a difference!  No excessive diving or bottoming out under hard braking or road shocks being transmitted through the bars over rough surfaces.  As well as having precision steering, I was now less fatigued on journeys - an additional safety bonus!

So would I recommend a suspension upgrade for an average rider?  The answer is unequivocally YES and buy it well before bling like aftermarket mufflers and so on - you'll be faster where it counts anyway!  I'm probably a slow learner and you'll be rolling your eyes and saying that I'm stating the bleeding obvious, but it really was a revelation with respect to just how big the difference was despite having ridden bikes for so long.

I think that my Street Triple will also benefit from having better damping.  Although the handling is superb, its light weight means that it tends to dance about a bit at speed on uneven surfaces, albeit not in a really unsettling way.  However, as it's only 7 months old, there might be a Disturbance in the Force if the matter is raised in the immediate future!

Oh yes, and a final benefit if you're of a mind to approach your infinitely Better Half for permission to spend money on a suspension upgrade....  I reckon that conservatively, tyre life on the Blackbird increased by at least 2000 km due to lower stresses.  In other words, the tyres weren't trying to compensate for inadequate suspension any longer.  So there you are - go and discuss the saving on tyres with a straight face and (almost) clear conscience!
Posted by Geoff James at 09:52