Cynicism, scepticism and other odd stuff

Whilst I have an optimistic outlook on life in general, scepticism is nonetheless alive and well in the James household, particularly when it comes to topics which don't have a whole bunch of data to support some pretty outrageous claims. You should see me froth at the mouth at most TV adverts - devices for allegedly improving vehicle fuel economy, magic creams for restoring lost youth and that's just for starters. On top of that, so-called clairvoyants, televangelists and so on - all good for raising a head of steam.  Jennie just sighs and says that's just one of the downsides of living with an engineer who has dealt in facts and data all his life.    However, I might, just might, have to eat a slice of humble pie.  Feel slightly uncomfortable in talking about it, but never mind; I've got broad shoulders to take the expected teasing!

Someone near and dear says that sometimes (mostly??) I have the maturity of a 5 year old. I'm not going to debate that here but would dearly love the physical resilience of a 5 year old.  Overall, I'm in good nick for 63 not-so-careful years but old sports injuries to my knees a give a fair bit of grief.  Fortunately, this shows up when walking, not riding so we can be thankful for small mercies.

We're off to Vietnam, Kuala Lumpur and Singapore in March.  There will be a fair bit of walking involved and some concerns about how well my knees will handle it.  A couple of months before Xmas, a local friend who is a fellow biker and ultra-keen cyclist was suffering from a hip ailment that had curtailed all forms of riding.  To cut a longish tale short, he bought one of those "power" wristbands endorsed by numerous sporting personalities, which apparently work on acupressure, magnetism, voodoo or Lord knows what.  Within a very short time, he was running around like a spring lamb and said that when he left it off for a few days, the symptoms started returning. Improved dramatically when he wore it again. Hardly rigorous medical evidence of course but my friend is a smart, well-grounded guy with a healthy dose of scepticism so wasn't inclined to pull his leg.

Fast-forward to last weekend when I had to run an errand to the nearby town of Whitianga.  Sun shining, so decided to take the Street Triple as it was early morning and the lunatic holidaymakers would hardly be out of bed, let alone getting on the highway and spoiling a great day by choosing which side to drive on at random. 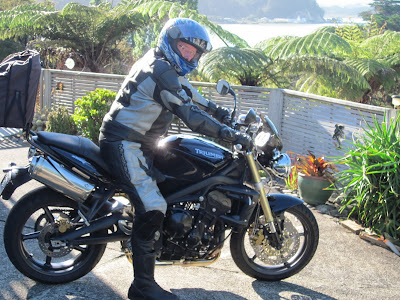 Last Saturday's shopping trip to Whitianga - a tad hot in full leathers!
The main purpose of the errand was knocked off in double-quick time and for no strong reason,  remembered that my mate had purchased his power wristband at a shop not far from where I was parked.  Sidled in to enquire about them, being met by a young female shop assistant.  Not quite with the embarrassment of a guy buying a marital aid or Viagra (only guessing, hehe), but still felt a bit uncomfortable about the whole business.  The assistant was remarkably unfazed and down to earth and as they weren't outrageously expensive, decided to buy one.

Slipped it on a wrist when I got home and forgot about it until a couple of hours later when I realised that my knees were nowhere near as sore as they usually are when standing or walking about for longish periods.  The improvement has continued all week.  Not a cure, but a significant lessening in the pain.  Placebo effect?  Possibly, but isn't a sceptic supposed to be largely immune to the placebo effect?  The claims of why they work may well be pure horsesh*t, but that doesn't mean that they don't work for another, unknown reason.  Whatever has caused the sudden improvement , I'm simply grateful for it. Just hoping it lasts until Vietnam!

Finally, there have been a few recent posts by motorcycle bloggers from around the world, me included; where feline members of their family featured prominently. A recent thread on a local bike forum brought back memories of a Kiwi guy, Max Corkhill; who adopted a kitten whilst living and working in Canada. Max and Rastus were inseparable, with Rastus travelling in an open tank bag on Max's BMW throughout Canada and the USA. There are some wonderful tales of their adventures in North America. When Max returned to NZ, Rastus came with him and the two of them raised a not inconsiderable sum for charity. I had the privilege of meeting them both at a classic bike meeting in their home province in the 90's - absolute characters. Rastus clearly regarded himself as Lord of All He Surveyed and wasn't alarmed by anything.

Tragically, Rastus, Max and his partner were killed instantly by a careless driver in the late 1990's. The affection in which they were held is clearly shown by the huge motorcycle presence at the funeral cortège. Here's the link to a very good article on their life and times: Rastus and Max 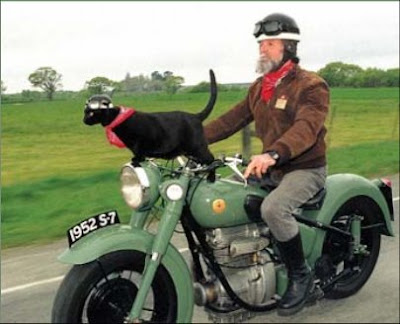 Rastus and Max Corkhill - what a partnership!
Posted by Geoff James at 15:01