How's this for great service?

I've owned the Street Triple for 18 months from new and my admiration for it still remains undiminished from when I posted the extended rider review in August 2010.  Fast?  Plenty for the area I live in.  Handles?  Has brought a new dimension to cornering ability.  Ergonomics?  An amazingly comfortable bike for a 5'8" old fella!

Despite all the positives, towards the end of winter, I noticed what seemed to be small rust bubbles appearing on the mirror stalks.  You know how it is when you're familiar with something, you tend not to notice day by day change but  last week, I suddenly noticed that the corrosion had spread.  This was quite disappointing given that the bike is garaged and has an inordinate amount of fuss lavished on it, including good quality wax. 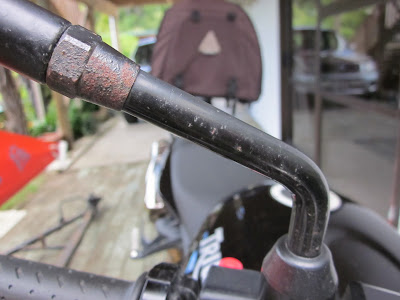 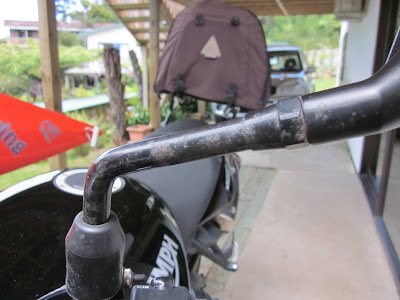 Left mirror stem
The greatest corrosion on the right stem is on the locknut with only small pitting on the stem itself.  The left stem has more corrosion on the stem and a little less on the locknut.  Both stems have corrosion beneath the rubber boot where they attach to the handlebar mount. Root cause is problematic.  The majority of the corrosion is at the front, suggesting that the weather whilst riding could have had some influence but why isn't it apparent on other forward-facing parts of the bike? Everything else is in excellent order.  It's possible that the metal could have rusted before painting but looking at the paint on the locknuts and stems, it looks VERY thin indeed and I'm not actually sure there's any primer/base coat!
Be that as it may, the first instinct was to rectify it myself as it was hardly a big job.  However, after a bit of thought, decided to email the Triumph dealer in Hamilton with the photos above, asking for their opinion.  Next day, I received a reply from Heath, the dealer principal saying that it was well worth notifying Triumph NZ and that he'd ask Matt, the workshop manager, to get onto it and see what eventuated.  Two days after that, I got a call from Matt saying that Triumph were happy to replace them and that a courier pack had just arrived with 2 new mirror stalks.  Because it was a warranty job, they were required to fit them and was I likely to be in the Hamilton area anytime soon?  Isn't that extraordinarily good service?

Always a good excuse to ride to Hamilton with most of the 160-odd km being on largely deserted back roads so last Friday, it was up early with clear skies and cool air...... perfect!  Pulled up outside the workshop 2 hours later to be greeted by cheery waves and a handshake from both Heath and Matt and then straight in to replacing the mirror stalks.  I felt pretty special and guess that's the sign of a top dealership where all the clients are made to feel so valued.  I'd seen comments on a local website bike forum that Triumph NZ were difficult to deal with.  Indeed, one person said that they "moved with glacial speed" on complaints.  I mentioned this to Heath in light of my outstanding service from both them and Triumph.  He replied that there was a formal process which they followed and there had never been any problems.  Maybe it's all in the approach - I can't speak highly enough of them. The corrosion issue hasn't actually disappointed me as it's more than outweighed by the fact that once the problem was acknowledged, it was resolved without delay -  the sign of an organisation which has systems and processes which work.

As the whole business had been settled at quite the opposite of "glacial speed", I didn't spend as much time in their wonderful showroom as normal, but here are some shots: 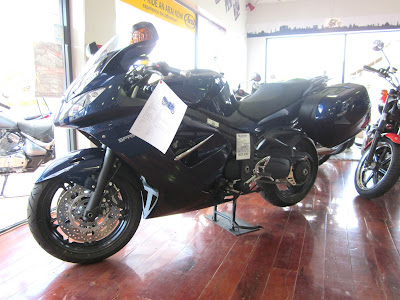 Triumph Sprint GT
I was very much taken with the new Sprint GT.  Beautifully finished and a true grand tourer.  Very good value for money with ABS and a whole host of goodies.  This is what my Honda Super Blackbird should have evolved into rather than the fuggly over-priced VFR 1200 with abysmal range.  No wonder world-wide sales of the VFR are poor and it's nearly NZ$8k more than the Sprint GT too.  Got it badly wrong, Honda San! 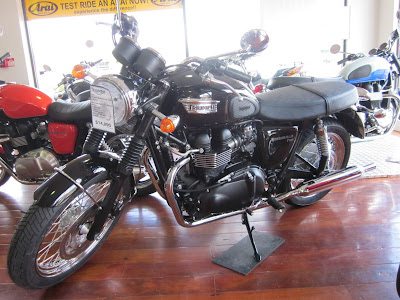 The legendary Bonneville
My current preference is for something a little more sporty but there's no denying that the Bonnie in black looks absolutely stunning.  Maybe later??? 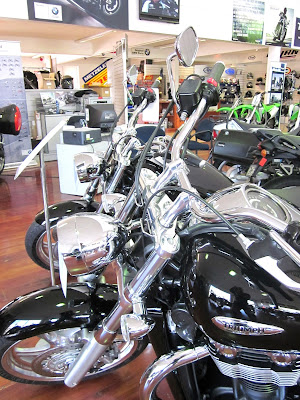 A brace of Thunderbirds
I couldn't resist the semi-arty front end photo of the two Thunderbirds - black and chrome looks soooo classy! Going for a big capacity parallel twin to differentiate the T'bird from a sea of V twin cruisers seems to have paid off handsomely in terms of market share.  Data from the UK market  indicates that Triumph sell more bikes there above 500cc than any other manufacturer.  There are strong rumours that they'll soon be entering the small capacity market which should worry the Japanese manufacturers, particularly with sales into S-E Asia where bikes are essential family and commercial transport.

As homage to Triumph's design team, a few photos of componentry from the Street Triple whilst it's clean!  If you didn't know what sort of bike it was, I'd bet that more people would pick it as European rather than Japanese origin.  Not that I'm anti-Japanese bikes in the slightest but as has been remarked previously, they seem to have lost their way a little in the last year or two in terms of innovation compared with Europe. 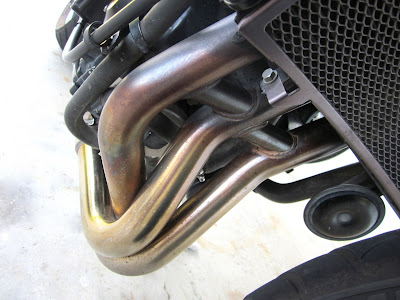 A sensuous tangle of piping! 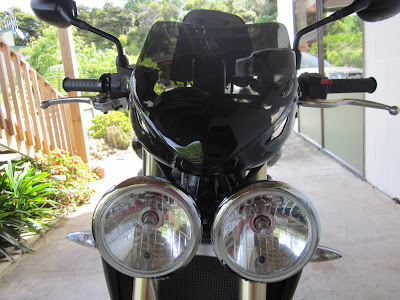 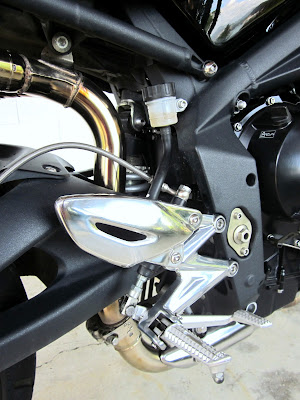 Each component a design gem 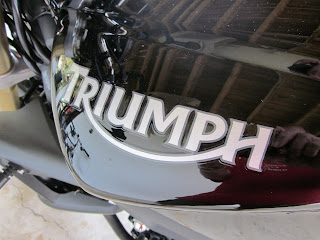 A lady with curves.....
As an aside, my route home from Hamilton was slightly different from the outbound run.  Going down a long straight  in the country miles from anywhere, my radar detector started to chirp - no big deal as I was legal or thereabouts.  The detector had picked up a brand new fixed speed camera on a pole by the roadside! (Presently puzzling as I thought that fixed cameras weren't operated by microwave).  Anyway, the point is as far as I'm aware, this area isn't a hazard black spot and has clear visibility all around for miles.  In the absence of data to the contrary, it's probably safe to assume that revenue collection is the primary objective given that it's in the middle of a nice long straight.  I suppose the one good thing is that in NZ, speeding fines incurred by cameras don't carry the additional penalty of demerit points against your license!  I fully expect one of the rural locals to have taken a hacksaw or shotgun to it shortly - if they haven't done so already.

Finally, I was delighted to meet for the first time yesterday a couple of really nice people from Auckland, a father and son; who have been reading this blog for a while.  They were holidaying in the area and I got an email from them asking whether they could drop in and see/chat about my Street Triple as they were thinking of getting one in due course.  We chatted for the best part of an hour and a half about the Triple and about motorcycling in general and it reminded me that informal networking like this is one of the special things about motorcycling - it draws people together irrespective of background, cultural or any other differences come to that.  Wonderful!